It was almost a year ago when we reviewed Project Starship, a vertically scrolling shoot ’em up from Panda Indie Studio and the prolific publishing house Eastasiasoft, our take away was that it was fun, unusual and quite mad but was let down by being too easy and far too short.  We said “If Panda Indie Studios can harness some of this creativity into a more substantial game, we’ll be very happy to play it” and now we’re here playing Project Starship X.

The game continues in the same vein as the previous title.  Once again, this is a vertically scrolling shoot ’em up but now you get a few more characters to play as.  Garret and Gwen return from the first game but now there are three more characters, each presenting a different ship type (these have to be unlocked though).  As before you control the action with the left stick or d-pad and you can shoot (obviously!) but the controls differ after that.  Instead of the special weapons and slow down buttons, you now have a dash button. 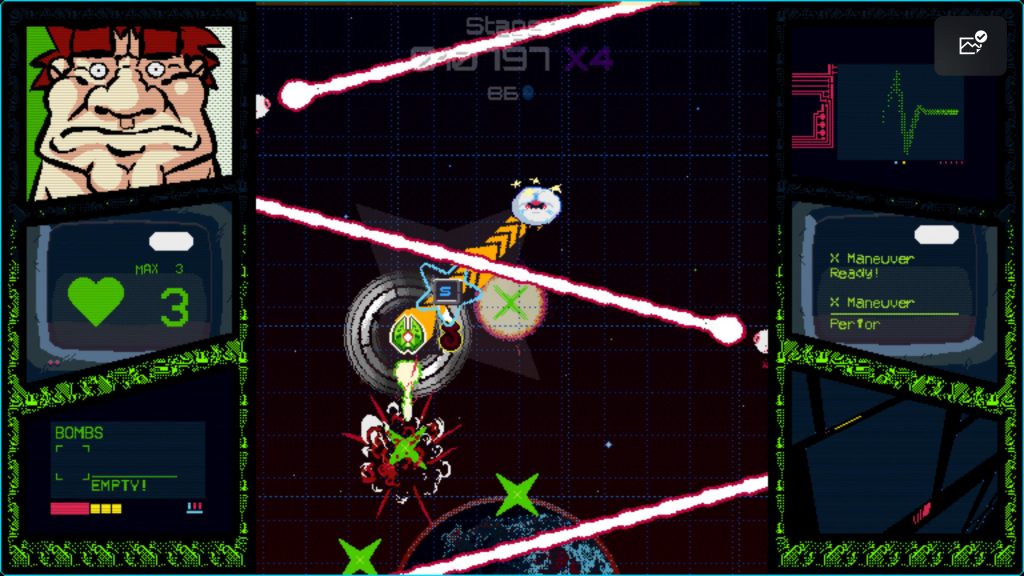 Shooting slows you down, a fairly common mechanic in shoot ’em ups, but also darkens the backdrop a little which is clever as it adds some contrast to the crazy visuals.  The controls are responsive and tight as well so in terms of the basics, Project Starship X is fine.

As with the first game, there are a lot of power ups to be found with turrets, missiles, spread shots and plenty more and while the game also allows you to pick up bombs, there are several types and you can only fire them off in the order you find them.  You don’t really ever feel underpowered, even when you face off against the game’s rather large bosses.

As with the original game, Project Starship X is pretty short.  You can beat the game in under twenty minutes but this time there is more replayability.  The game is mostly procedurally generated, albeit hitting the same beats on each level, but we were pleasantly surprised to see new levels being swapped in as we went along.  For example, on one run the second level had us running alongside the surface of the sun, battling gravity as we went.  Things like that are very welcome.

When it comes to new features, the game also adds on-foot sections where your ship turns into a mech.  These still play out in the same vertically shooting way, but it’s nice to see new wrinkles to the gameplay.  So, on first impressions Project Starship X is what you want from a sequel.  However, just as with the first game, there are a few issues.  Some of these are ones that existed before and some are new.

As before, the game is still pretty short with just five levels (or six, we’re not sure as in one run we’re pretty sure there was a level after meeting the boss, it’s all a bit odd like that) and it’s pretty easy.  Although, as with other Eastasiasoft shooters, initially it seems like it might be pretty difficult but a few runs in and you’ll get through it.  Actually, the final boss was a sticking point, at one point draining me of seven lives but stay in the bottom corner and watch out for the second wave of bullets and you’ll dispatch him pretty easily. 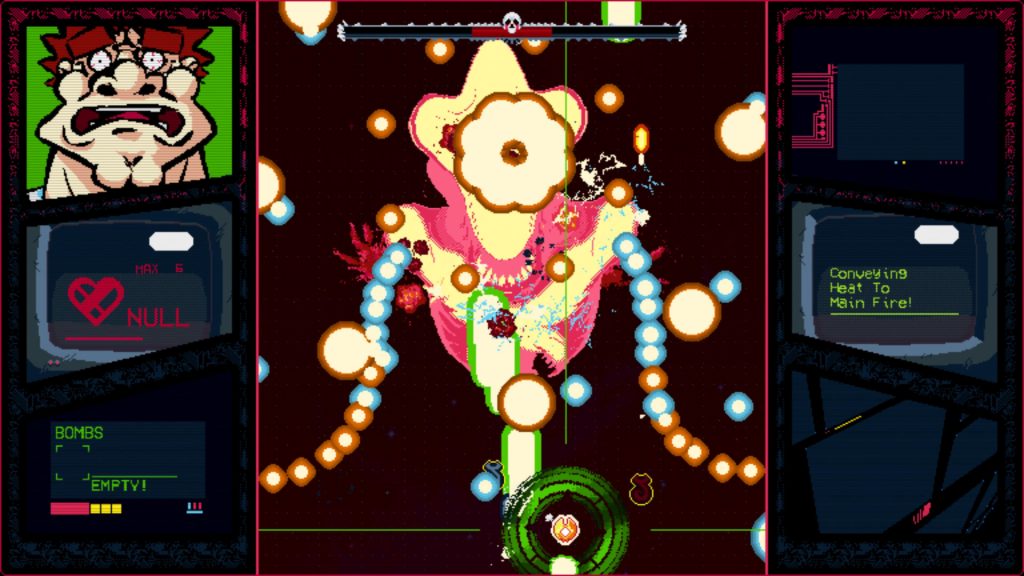 The main issue though is that at no point was the danger from enemies and their bullets.  Sure, they’re there but they never really cause much of a threat.  The vast majority of our deaths came from obstacles such as spikes, lasers and other things that are part of the level rather than a danger from enemies.  That serves to make the game feel less like a shoot ’em up and more of a dodging game.  We’d rather the threats were weighted more towards enemies and bosses but that’s not the case.

Even then, the deaths from obstacles weren’t usually down to our skill but rather the clumsiness of the dash move.  Instinctively, you want to dash where your left stick is pointing but in this game you dash forwards which feels unintuitive and would sometimes lead to us losing a couple of lives, especially as some dashes actively lead you into traps.  It isn’t the best mechanic.  Likewise, while we did like seeing the mech sections, if only for a bit of variation, they also felt quite clumsy.  This is made worse by the dash move changing to a jump but the jump doesn’t work on some obstacles, even if they are the same height as others.

This only serves to slow you down by one run of the game as you march inevitably to a fast completion and an even faster Platinum.  As with other Eastasiasoft shooters, this gives up the final trophy way before you beat the game, which might harm replay value for some gamers.  It would have been absolutely fine to have a trophy for beating the game and others for actual skill-based things but instead the game is just happy for you to show up and beat a few stages. 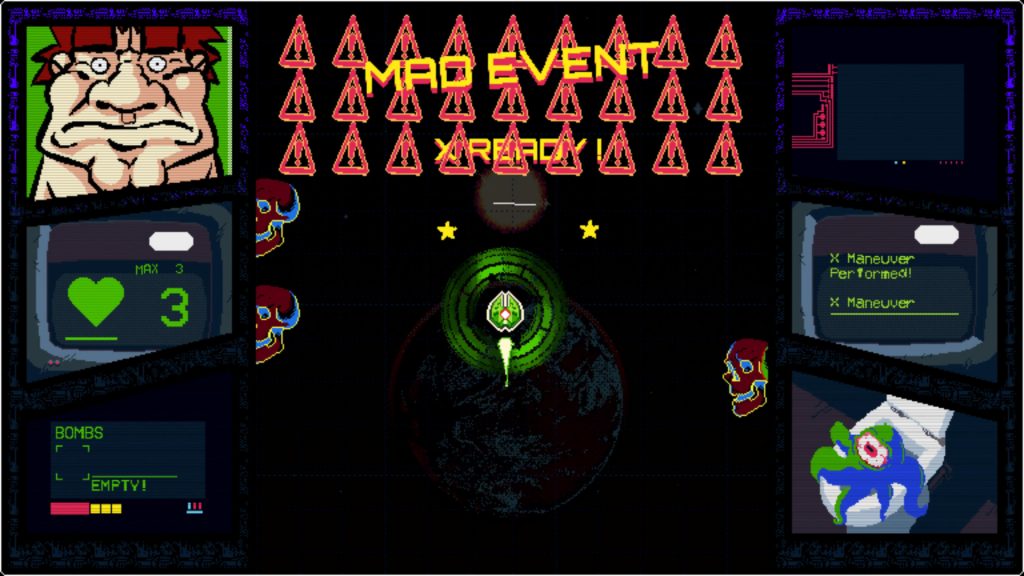 The presentation is a mixed bag.  As with the previous game the graphics are low-res, garish and very much in your face but they suit the game and its off-beat sense of humour.  Sometimes the action is a little bit hectic but that serves to make the game more exciting rather than hampering gameplay.  As we said, the game is pretty easy to beat and the visuals don’t affect that.  The music definitely deserves a mention with a wild, varied soundtrack.  The effects are beefed up from the previous game too.  Some gamers might find it all a bit too basic for a game originally released in 2020 though and it sometimes feels that the game looks this way because there isn’t a more talented designer on the team but it all works stylistically for us.

Having played through the game a few times now, we feel pretty much like we did after reviewing Project Starship.  The game is fun, full of character and easy enough to get into but it’s also too short, too easy and a bit too simple in terms of gameplay mechanics.  There are reasons to keep playing with new characters, power-ups and levels to unlock but by the time you do, you might feel that you’ve seen it all before.  Twice.

What we wanted from this sequel was a longer, more balanced challenge and instead we got more of the same but we still had fun playing it and at the cheap asking price of £3.99, this is bad for a small chunk of pocket change but it won’t be making our list of top ten shooters on PSN either.

Cons
- Too short and too easy
- Trophies are given away too quickly
- Visual style might not be for everyone
- Difficulty only comes from the environments and the clumsy dash move
Summary
Project Starship X is a retro-styled shoot 'em up with plenty of character and a good sense of humour but, like its predecessor, is also too short and too easy. We're still waiting for a more substantial entry into this series but this might kill an hour or two if you want to reveal its secrets.