Tropico 6 is a management sim that’s been out for a few months on PC but has now made it’s way to PS4. I’ve only ever played Tropico 3 many years ago so I’m not going to be able to point out the slight differences between this and the last version (or any version really) but what I can say is that it’s a very enjoyable game. 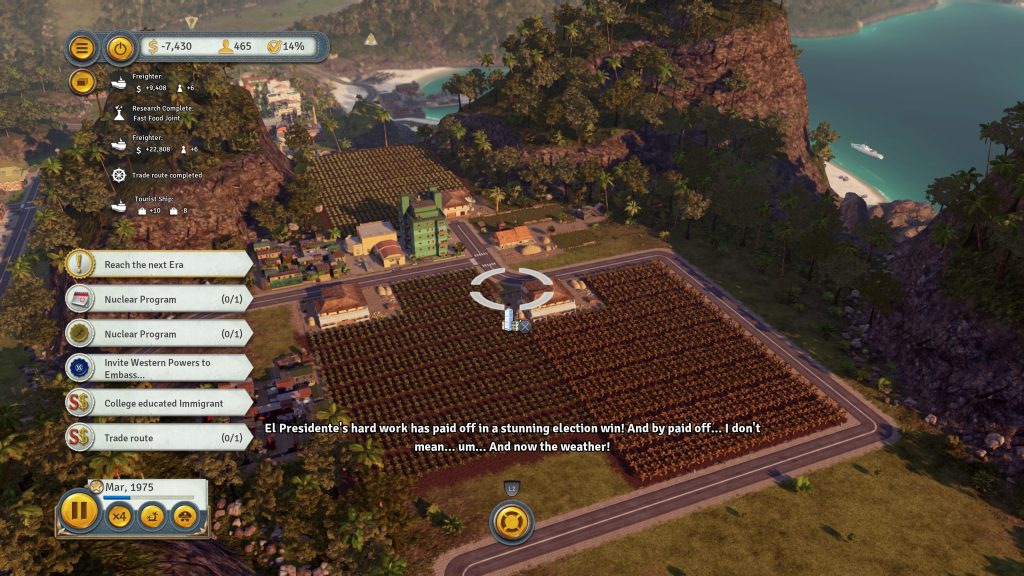 You play as El Presidente, a customisable ruler of the fictional island of Tropico. As ruler you have control over everything, from how many and which types of houses are available, what industries are active, imports and exports, the constitution and international relations. Ultimately you are in charge of how well the country operates, elections showing whether the people have faith in you or rebels ousting you by force if they believe it’s necessary. Keep your house in order though and you can rule through the ages.

There are four eras represented: Colonial, World War, Cold War and Modern Day. The technology and industries evolve as you progress through and adapting to a new era is the key to succeeding. You can start with ranches, mines and distilleries but with the invention of electricity later on things can really ramp up as you’re canning pineapples, generating tourism, creating pharmaceuticals and developing nuclear bombs.

Controls work as you’d probably expect from a PC port. The left stick moves a (slightly too large) reticule for interacting with stuff, the right stick controlling the camera to move around the island and zoom in and out. Radial menus give you everything else you need with the building menu opening out into more radial menus, whilst others open up the appropriate window which you have to scroll through rather than moving a cursor. It works fine, but can be a little unresponsive at times. You’ll soon get used to its quirks though and jumping between menus without a problem.

Providing for the populace is vital. Make sure they have sufficient housing, entertainment, access to faith, healthcare and education if the job requires it. There are plenty of tools to help you keep track of this stuff with a heat map showing things like high crime areas or areas of low liberty or an almanac putting the data into number form. Happy workers will earn the country money and will vote for El Presidente! 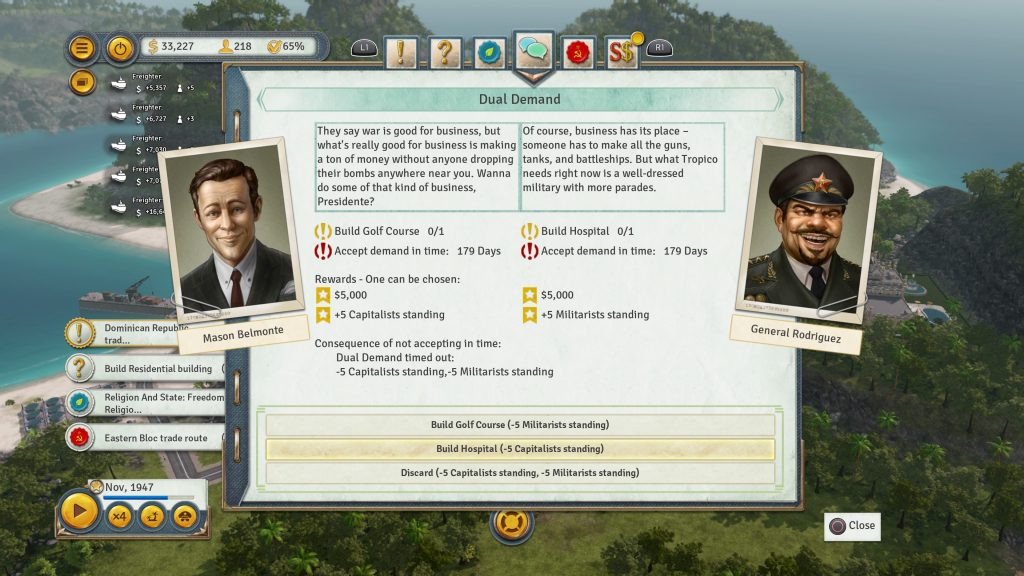 People will belong to specific factions and the faction leaders will approach you with certain tasks, like building something or enacting an edict, which will gain their favour. They’ll also offer you a reward so they’re well worth doing, a little extra money for the country never hurt. But then again, neither did a little extra money in El Presidente’s Swiss bank account which you can use to buy standing with factions, blueprints for buildings or even an image campaign if your approval rating is getting worryingly low. A little manipulation of the votes will also get you over the line, probably, but the people won’t like it.

New to Tropico 6 are raids. There are four buildings that become available through the different eras and they allow you to loot certain items with pirates or intimidate your neighbours with commandos to make yourself look better in comparison. They can also perform heists, which means stealing a landmark from other countries to bring to Tropico. You can have Stonehendge, the Taj Mahal or the Statue of Liberty gracing your island if you want. It’s not a massive game changer but it’s a new feature which gives you another option to play with, each landmark granting bonuses.

There is a sandbox mode which allows you to set your own start date, money, population, the difficulty of the factions and the win condition. There’s also an online mode which is the same but lets you play with up to four players, depending on the map. The main meat of the game though is fifteen campaign levels which put you in designed scenarios and have a story of sorts. Only three are unlocked from the off but more will become available as you complete them. They’re a great starting point (after the tutorial, which is pretty good at teaching the basics) as they give you goals to achieve and point you in the right direction as far as constructing a sustainable economy and keeping people happy. They’ve also got a great sense of humour, which is always on show thanks to the characters you interact with. One scenario has Tropico take on Willy Wonka which is a lot of fun. The music is super catchy too. 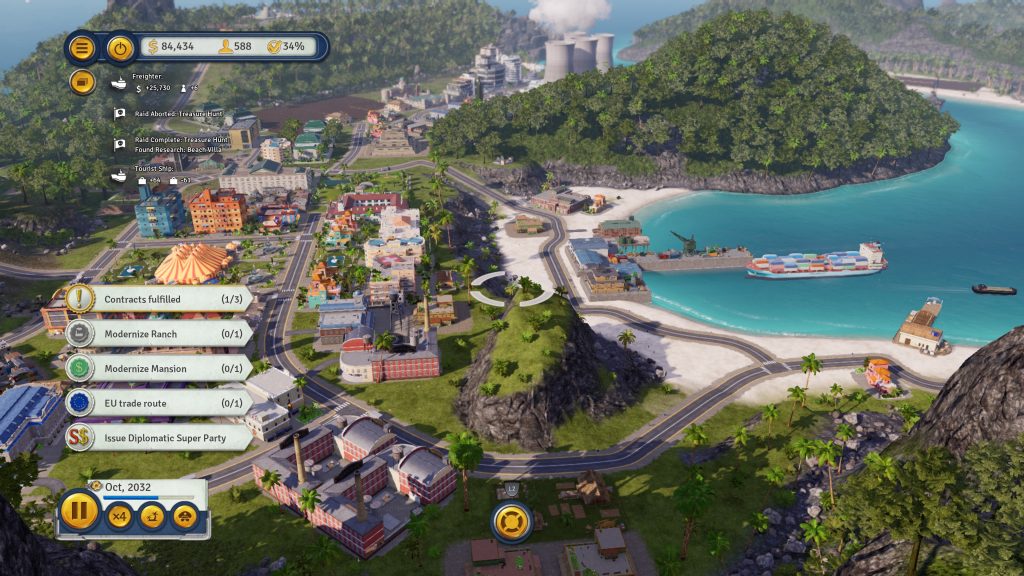 It can be tough though. A couple of times I’d played through a scenario for hours (each can take around five hours, maybe) only to lose an election or start haemorrhaging money to the point where the game told me I should probably reload a save. It always felt like my fault though, and making sure you have a stable economy and suitable funds stored up before moving on will put you in a good position to succeed.

The game can also put barriers in the way however, unintentionally. Roads are an annoyance to lay down, constantly wanting to bend and failing to find a path unless you make lots of little roads and join them together. Housing happiness is a measurement that is always a pain, with people living in self made shacks being counted as homeless. The only problem is quite often those shacks will be placed right next to empty houses that are perfectly suitable for their budget. It happens far too often and requires too much micromanagement to try to fix.

I’ve had other issues like the game claiming that a building is inaccessible when there’s a road going straight to it and a fish farm not getting any employees (demolishing them and rebuilding them fixed these issues). Other issues have been fixed by quitting out and reloading to make sure certain things registered. An unresponsive button can be fixed by a quick pause and unpause. These odd problems never stopped me playing or making progress, but hampered my enjoyment just a little and made me question whether things were happening due to a bug or not. Hopefully they will be ironed out with some patches. 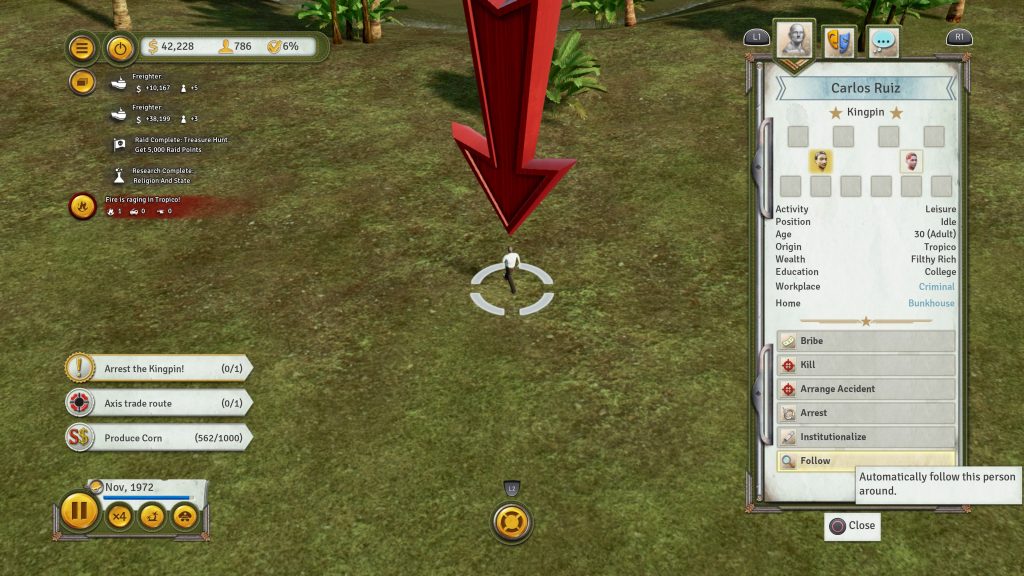 Even with those issues Tropico 6 is a fantastic game. Fun, amusing and addictive – a lethal combination. If you’re a fan already then you know what to expect as things aren’t that different but if you’re a fan of the genre and have never had the pleasure then do yourself a favour and plan a trip to Tropico, you may end up staying longer than you anticipated. Raise your cricket bats – Viva El Presidente!

Tropico 6
8 Overall
Pros
+ Very addictive gameplay loop
+ Scenarios are humorous and a lot of fun
+ Fantastic music
Cons
- Some irritating little bugs
- Things can go pear shaped all of a sudden
- Maybe too similar to previous games
Summary
Tropico 6 is an incredibly enjoyable management sim with a lot of charm and a great sense of humour. It's not too different from the rest of the series but you'll still find yourself playing it for hours on end.