For all that Trailmakers doesn’t have Lego branding, you’d be forgiven for thinking it should have. Flashbulb Games are also based in Copenhagen, which although not that close to Billund (home of Lego) makes us wonder a little at what might have been. Trailmakers was an exclusive on Xbox One a few months ago, now us on PS4 get to see if it’s any good. Due to the sheer fact it’s so open ended, it’s a difficult game to review from our point of view. 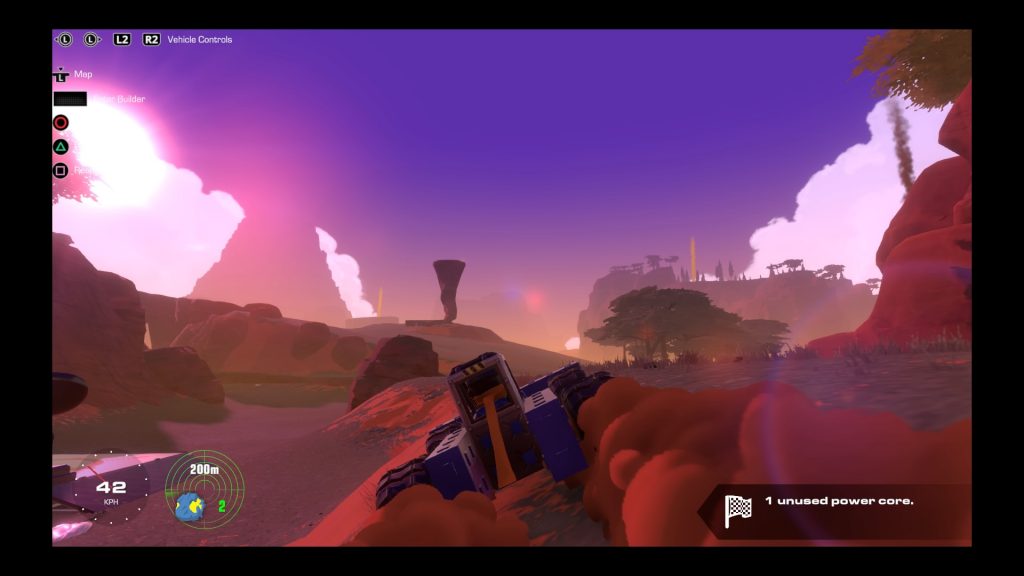 Your logical jumping in point is likely to be the ‘Stranded In Space’ campaign mode where you start with a barebones buggy with no frills. You have to retrieve components to eventually build a rocket to escape from the planet you’re stuck on. You’ll feel a little bewildered being thrown straight into the building menu, but thankfully you’ll begin to get the hang of it. The camera can be a little non-compliant we found.

The barebones plot, such as it is, is that your space hauler polluted the planet leaving debris everywhere. To get back home, it’s your job to find all the necessary parts. At first you’ll be stuck on the one small island, the map eventually opening up as you increase your inventory. For us the underwater turbine was key to getting to our next beacon across an otherwise inaccessible expanse. Never mind our vehicle wasn’t exactly buoyant and we were upside down, we got across eventually. 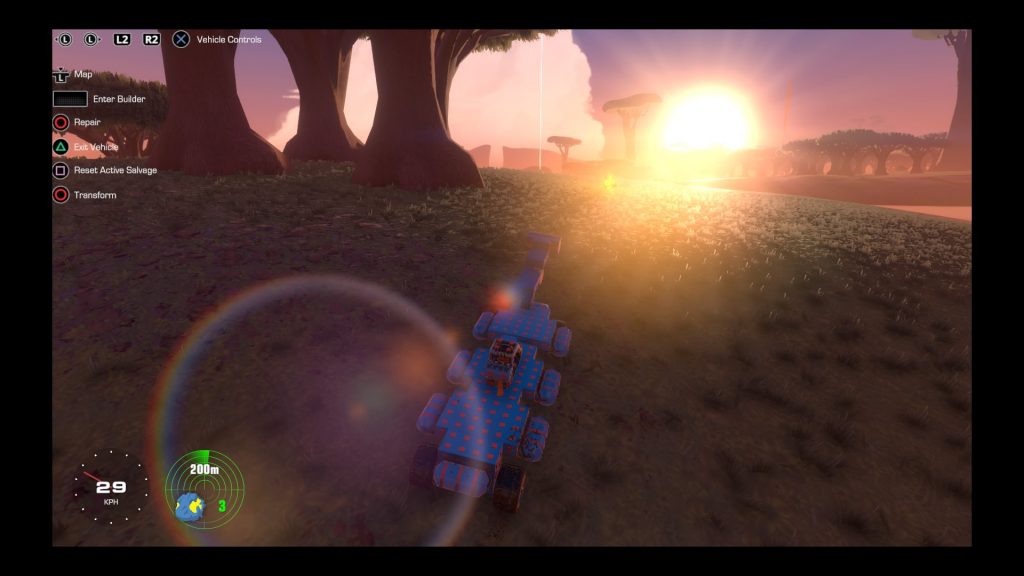 After a while you’ll unlock preset blueprints when you get the constituent parts for each, the amphibious craft is likely to be first. This opens up a fair few islands , but you’ll still be stuck with whatever items you can push to a beacon on the same island. You’ll be tipped off as to where these are located by a plume of smoke. It’s a mulligan, sure, but a handy pathfinding aid in the early game.

You’ll soon realise a large proportion of debris is well out of reach, usually due to being beyond your reach. More often than not, this is down it being on a floating island in the sky which precludes easy access. In addition there’s a few items that end up being under the sea, so your unlocking a submarine becomes essential. 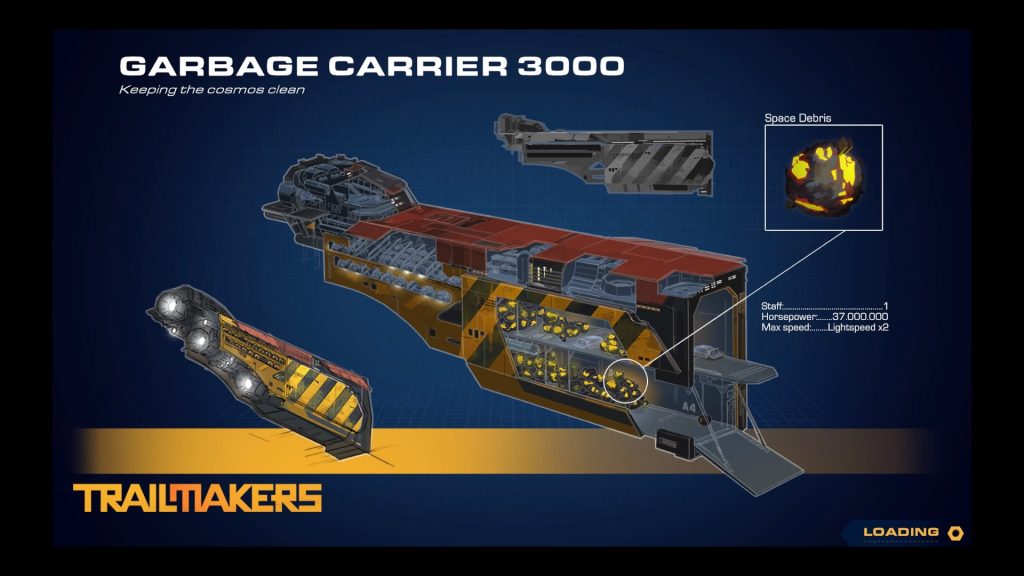 Once you get the parts to build a submarine you’ll get most of the items lurking on the sea floor without much trouble. However, some of the items remain elusive due to their mass being too much for the buoyancy of your craft to overcome.

The electromagnet becomes essential to progressing to later stages, as all the trash is conveniently stored in ferromagnetic rocks. Some extra parts turn out to be explosive too, so a retrieval mission can soon go south if you’re not careful and bump around too much.

As well as the main campaign there are two racing levels where you can play around to your heart’s content without needing to worry about unlocking components. You can also download other people’s creations, although due to the game being in relative infancy on PS4, pickings are a little slim. 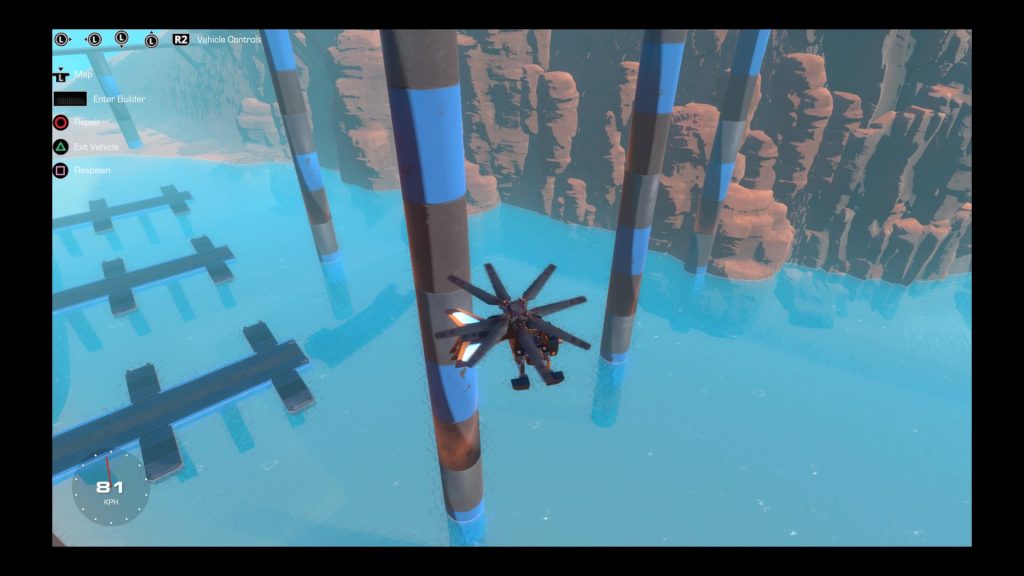 There also a further three sandbox levels to lark around in, but we found ourselves tiring quickly and wanting to get back to the main campaign. They’re an interesting adjunct and no doubt fun in multiplayer if that’s your thing.

Trailmakers suffers from the same problems most open ended exploration games do. There’s almost too much to do, thankfully the campaign gives you a good focus and a purpose. Like any game with a creation mode, you can go wild in the creation space if you want to, but we fear that it’s a little late to the party given where we are in the PS4 lifecycle.

Trailmakers
8 Overall
Pros
+ Campaign mode is great to stave off ennui and maintain your focus
+ Powerful building mechanics
+ When you find critical components and the world opens up
+ Muddling your way to drag a part with your jury rigged vehicle is genuine fun
Cons
- Campaign is occasionally frustrating due to unreachable parts and no evident solution
- Non-campaign modes feel a little superfluous
- Unwieldy camera in build mode
- Perhaps a bit late in the PS4's lifecycle to gain a decent following
Summary
Trailmakers is a great open world build-em-up with a fantastic campaign mode. The camera in the build screen can be a bit of a pain in the chuff. Just don't call it a Lego game.