I often wonder why mobile ports attract the wrath they do. Having covered a few, there always seems to be some substance to them, whilst simplified in controls and a little lacking in presentation. I’ve rarely seen it feel so wrong to hold it against a product. Timber Tennis Versus, by Digital Melody, is one of these instances where you cannot escape the perceived limits of a mobile platform. 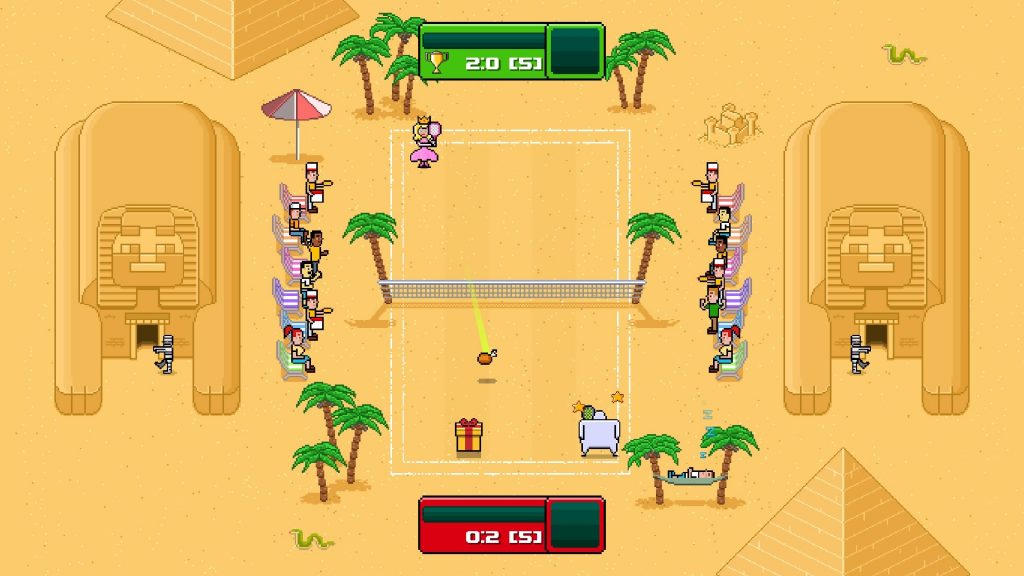 As the title suggests, this is a tennis game and, to be fair, the presentation initially seems fine. It’s a one-on-one version of the sport with control being handled by the d-pad or left analogue stick. You tap a direction regularly to traverse the baseline and look to position yourself for a return. There is some rhythm to it and it is simple to grasp but it feels so limiting. I liken it to a pixel art version of Pong where you have one axis of movement and no control over your shot’s direction. There’s not a lot of strategy, finesse or power to it.

You can collect power-ups at random that can either enhance you or restrict your opponent. Most seem to cater towards inhibiting movement or visibility but there’s a couple that empower your character with powerful shots or increase your stature. You also have a button to serve but aces are rarely accomplished unless you’re playing a particularly skittish AI. Other than that, every shot plays out at the same pace with the same bounce and at the same distance. As a result, some rallies can go on forever and any enthusiasm you have can quickly wane. 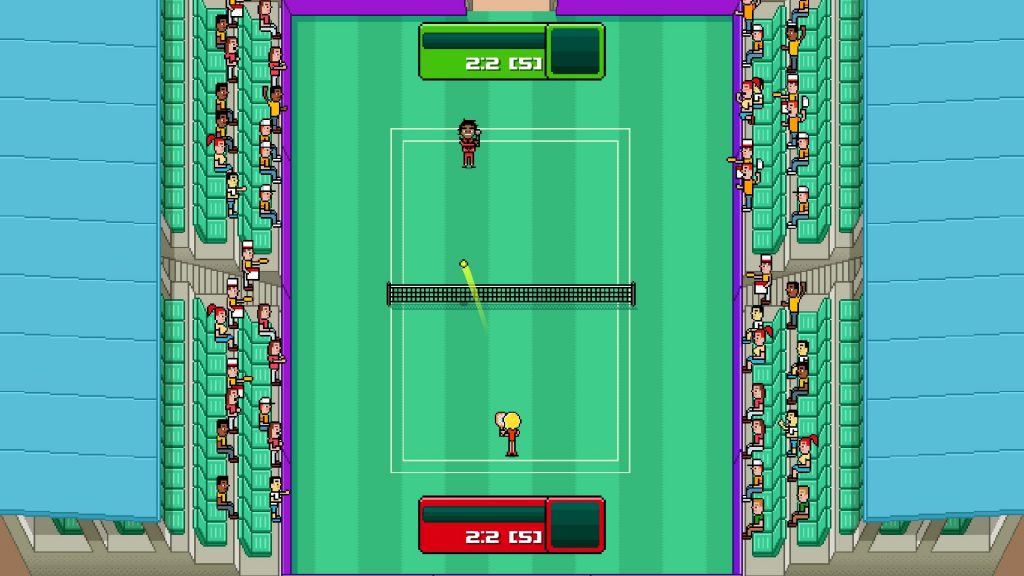 As a single-player experience, content is exceptionally light. The career mode features random skirmishes against an opponent or a slightly more substantial tournament mode. Depending on difficulty, you’ll be tasked with battling up to seven adversaries from round to round. You can pick how many points to fight for and then you’re straight to the court. I don’t get the sense of a consistent progression. Whether you’re playing an easy, medium or hard tournament against the AI, you can breeze past most of them just by understanding the cadence of play. I was mostly waiting for the mistake to come from the other end. Easy ace opportunities tend to be gifted by the AI whenever they’re behind as they prance along the baseline. Skirmishes offer a sterner challenge but, again, you find a pace to play at and just wait for something to go wrong with your opposition.

Fun might be had with others. You can participate with local and online multiplayer matches which can accommodate two players. Online lobbies are absolutely deserted at the time of writing so keeping local is probably your best bet. Against human opposition, the matches can have more stakes to them although, it can’t escape how limited the gameplay actually feels. On the one hand, it’s easy to comprehend but there’s so little input required from the player. You just move left or right and the game will handle the return for you. Most power-ups affect the same of the baseline as the rest of the court is unused. 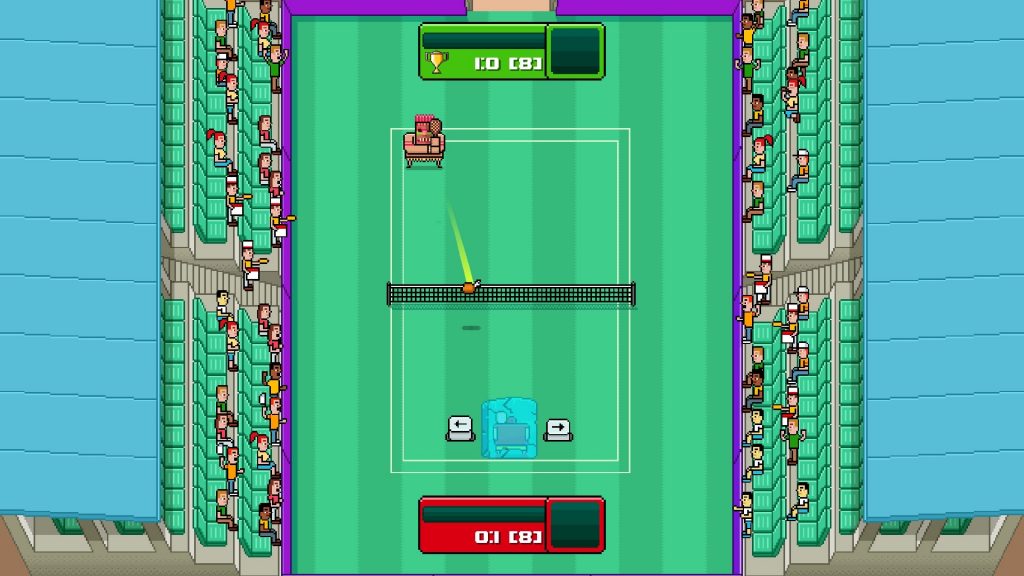 Timber Tennis Versus does have a nice look to it. The pixel art style allows for some interesting, symmetrical court designs that have a varied palette and some nice moving elements. The characters on offer have a uniqueness to them that, unfortunately, does not transfer into gameplay. Every hero carries the same weight and feel and to choose between them is an entirely cosmetic decision. Balls operate in the same way so a grenade or shuttlecock carries the same weight as the default tennis ball.  When tempo seems to play such a factor, it’s a shame no attempt has been made to change it up.  You gain coins for competing in matches but, when the rewards are entirely for show, it’s hard to feel like you’re progressing towards something. 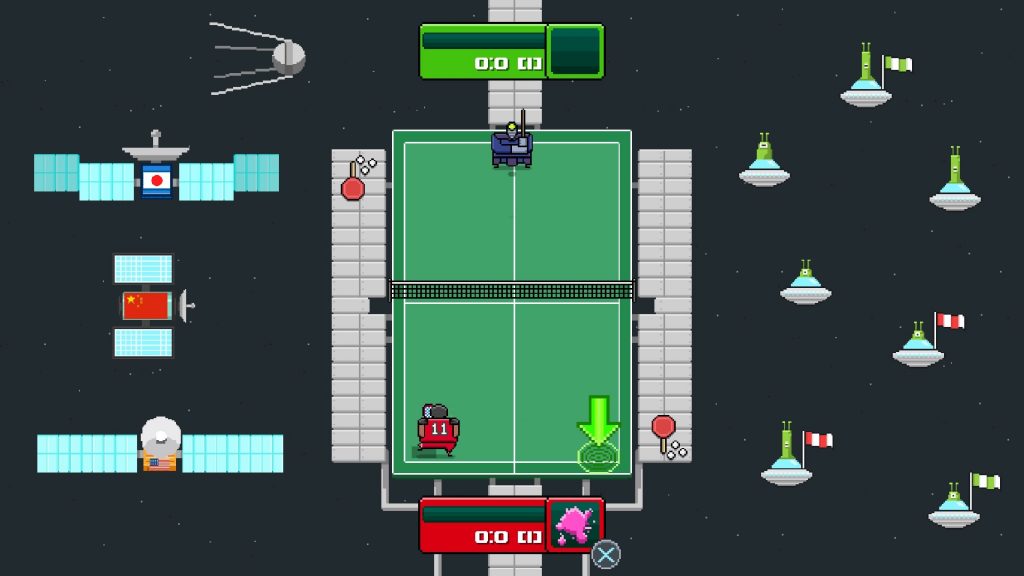 Timber Tennis Versus feels hollow and lacks some depth that could’ve helped it become a decent multiplayer romp. As it is, you’re left with something that doesn’t ask a lot of the player. There’s not much room for skill, variety or intrigue. The pixel art aesthetic makes the characters look interesting but they don’t offer any actual individuality. The heroes and balls all play the same and it all leads into a very static, restricted effort.

Timber Tennis Versus
4 Overall
Pros
+ There's a rhythm to the tennis which is nice to dial into.
+ The pixel art is well done.
+ Environments are varied.
Cons
- Controls are simplified to the point of boredom.
- Very few online or single-player modes to try out.
- New heroes and balls only offer cosmetic changes.
Summary
Timber Tennis Versus suffers greatly from a bare-bones approach to the sport. The ultra simplified controls and lack of content left me bored fairly quickly. There's a nice rhythm to the rallies but your lack of any real influence means you're hoping for a power-up to finish the job for you. Whilst there's balls and heroes to work towards, they offer only cosmetic changes to a game that badly needs some variety to its gameplay. It's a weak, short-lived experience.