We’ve made no secret of our love for 10Tons Ltd and their range of top down shooters.  Follow us on Twitter and you’ll regularly see us going on about Jydge which we recently reviewed again when it showed up as part of the PS5’s launch line-up.  As soon as we saw that, we asked 10Tons to give the re-release treatment to the fantastic Tesla vs Lovecraft but those fantastic Fins have gone one better and dropped Tesla Force on us, a bonafide sequel.  It’s a cross-buy PS4/PS5 release and we fired it up on PS5 because we’re about that new gen hype.

The previous game was a top-down twin-stick shooter which saw you playing as Nikola Tesla as he tried to save London from an invasion of evil demons summoned from the mind of H.P. Lovecraft.  It was a roaring success for the genre as it had all of the excellent upgrading mechanics we’ve come to expect from a 10Tons game but married to some of the most exciting, dynamic action we’ve seen in the genre.  The game was popular enough to warrant some DLC which was good but didn’t advance the game enough for our liking. 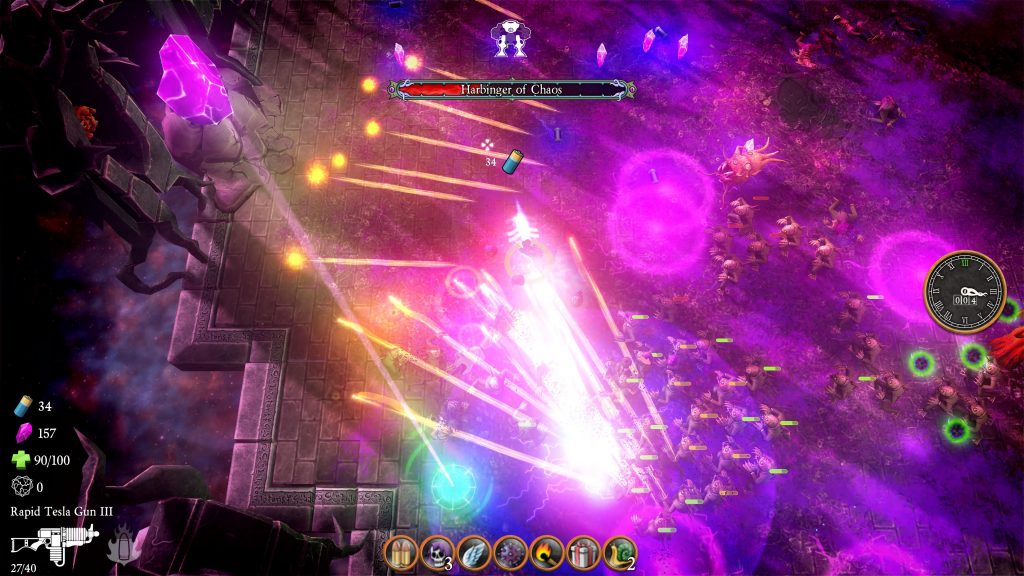 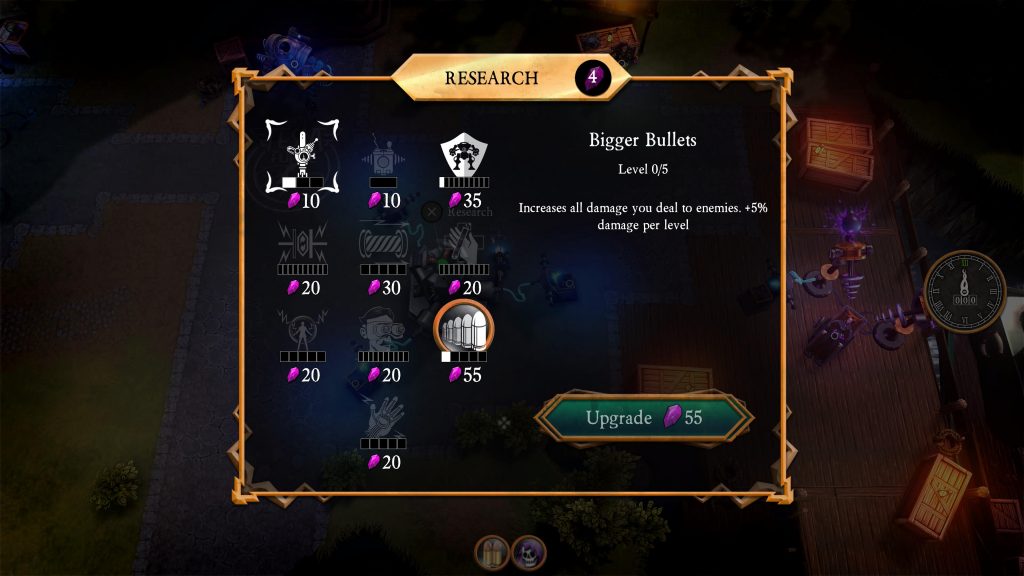 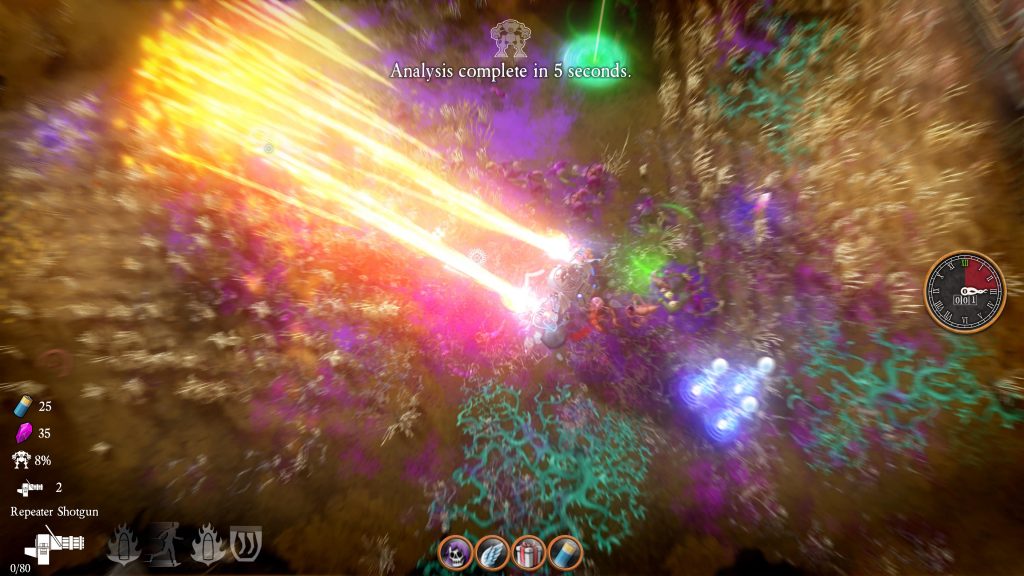 Tesla Force is a return to the same formula but with a few key differences.  But first let us look at what’s remained the same.  It’s still a top down shooter with twin-stick control and you’re still in London facing off against those Lovecraftian beasts.  You also still have all of those lovely weapons, perks and gadgets to help you.  That means that you are able to put out a stunning amount of firepower but your enemies are numerous and so rather than feeling like you’re armed with a peashooter, here you feel like one of those mechs from the shitty last Matrix film, absolutely filling the screen with bullets but still struggling to cull the massive horde of enemies.

You’re still armed with a handy dodge move and you still begin each level in a mech that then self-destructs but can be reequipped by picking up its four main component pieces.  The levels are randomly generated and when you finish them you are still offered a choice of upgrades.  Collecting crystals also allows you to then purchase permanent upgrades, as per the first game, and these are very useful adding durability to your mech, increasing your firepower or adding new abilities such as bouncy bullets, extra projectiles, rear-firing guns and dozens more. 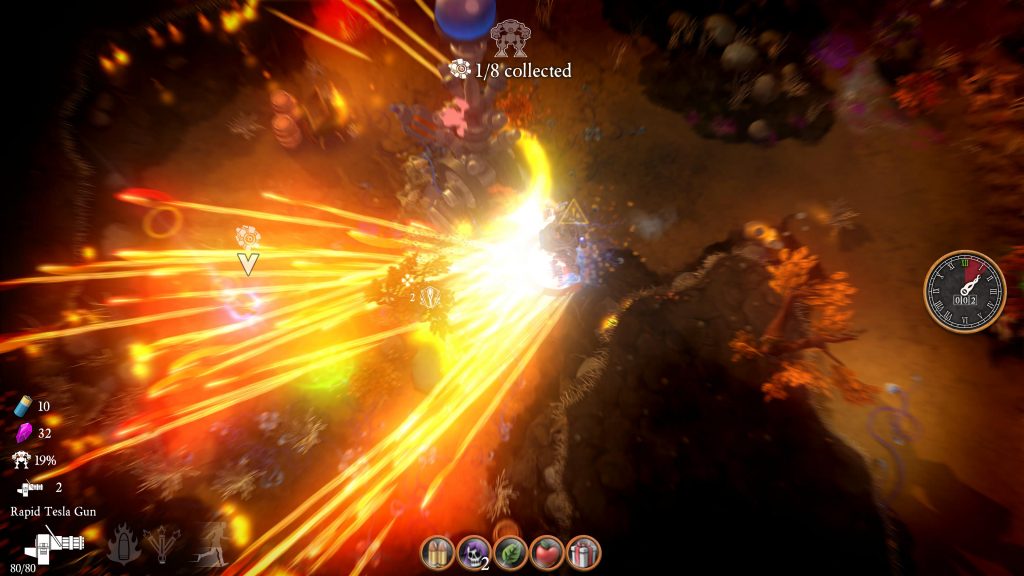 So far, so familiar.  So what’s changed?  Well, this game is more of a rogue-like for a start.  The game has three chapters, each with twenty or so stages (ending in a big end-of-chapter boss battle).  If you die during this, you’ll have to restart the chapter with all temporary perks and upgrades lost.  It’s definitely more traditionally a rogue-like than the previous game but it works, giving you more of a sense of urgency as the chapters unfold.

Also, this time Tesla has friends with Mary Shelley, Marie Curie and even Lovecraft himself all being available as playable characters.  They all mainly play the same but with a few wrinkles to their build.  Shelley doesn’t use a mech directly but rather has a self-driven one join her on the battlefield (it’s not great but she compensates with a very useful shield), Curie plays quite a lot like Tesla with different stats and the option to dual-wield guns and Lovecraft has a different type of mech (that’s not as good) and the option to switch up perk choices when the ones presented aren’t all that useful.  These can all be played solo or in co-op (local, up to four players).  Admittedly, we stuck with Tesla for most of the time we played it but it is nice to have a choice. 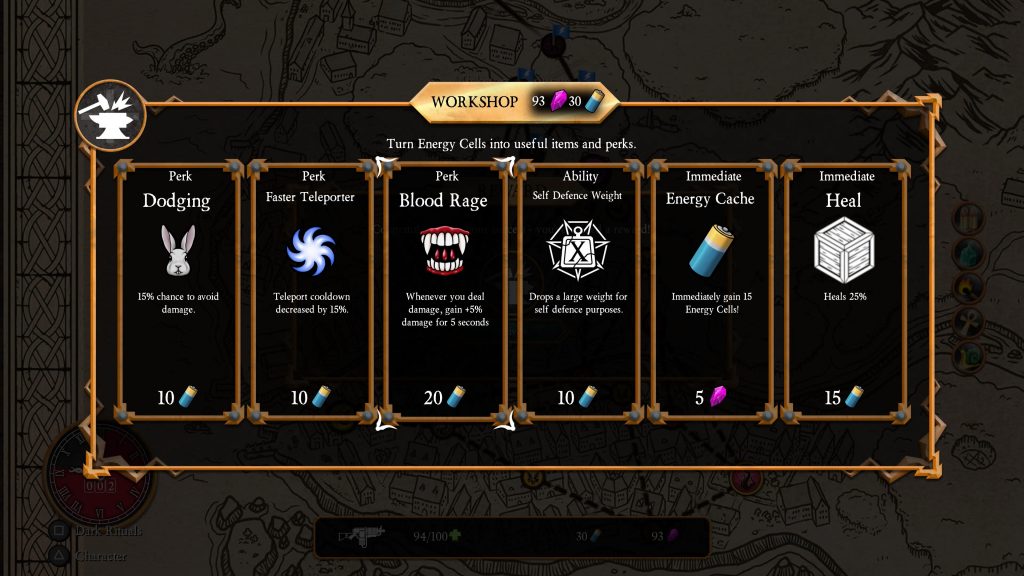 Aside from that though, this is pretty similar to the previous game but that’s no bad thing.  Firstly, it means we get all those lovely upgrades to play with and secondly it means we get that fantastic all-out action that the first game dazzled us with.  It really does have to be seen to be believed.  Imagine you’ve got a pistol and it shoots a few bullets at a time.  Well now imagine replacing that with something faster and more powerful like a machine gun.  That’s a lot more bullets.  Now imagine you’ve caught the perk that adds one extra projectile when you shoot, doubling your power.  Now imagine you caught three but now you’ve also got a perk that fires behind you, at the same rate.  Add to that bouncy bullets, so more shots stay in play when you miss.  Add to that a change to fire bullets.  Oh and now you’re back in your mech which basically uses miniguns.

Somehow Tesla Force manages to track all of that chaos.  Hundreds of bullets all bouncing around as you mow your way through a horde of dozens of demons.  It’s absolute chaos but is also controlled enough to be perfectly playable.  Your teleport move gives you more survivability too but has to be used carefully because getting cornered with out teleport charges is certain death.  The whole thing is just so exciting.  Personally, my last review was Observer, a game where all you could do is look at things, the exact opposite of a power fantasy.  Well, Tesla Force is the exact opposite, constantly beefing up your attack, making every level a joy to play. 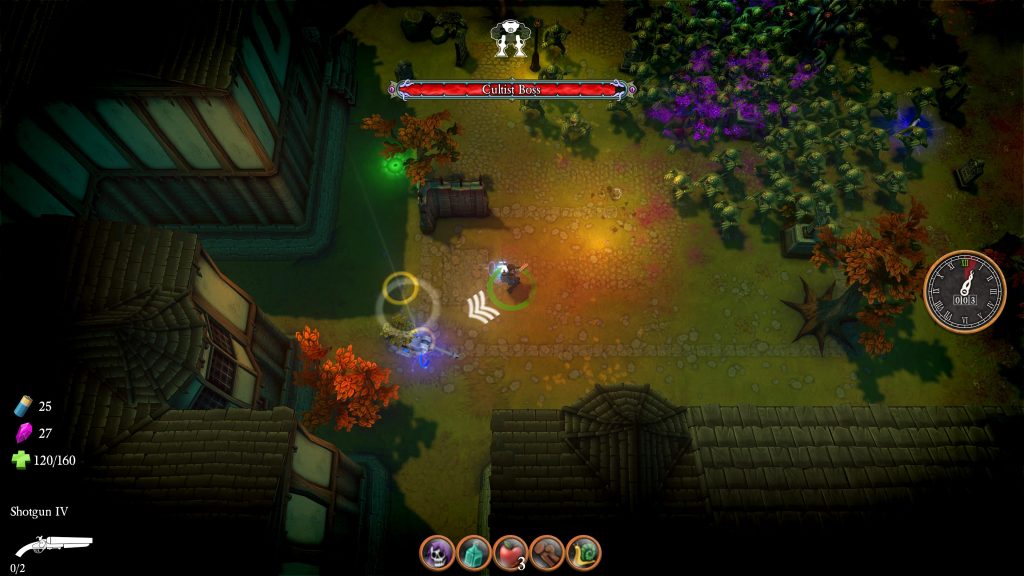 As before the game has that odd neon coloured look to it but it’s very classy and unique looking (well, apart from looking exactly like the first game).  The colours pop beautifully and the lighting is great, giving the game the look of an ’80s vampire movie or something.  The sound is beefy and constant, sounding great on a decent soundbar (something you should really invest in).  The cutscenes are a little grainy and plain but that’s a small niggle as we couldn’t care less about stories in this genre.

The only minor niggles against the game, and these are pretty minor, are that it could all be quite repetitive for some and the trophy set is a little odd with the PS4 and PS5 versions having identical sets apart from the PS5 missing a platinum.  It may not bother many people but it’s a slight annoyance if you’re into maxing these games out, which we are because 10TonsLtd manage to balance their trophy lists quite well in terms of skill requirements and time.

As for the the PS5 upgrade, it’s undetectable.  The haptics are basic and the game looks the same on either format to us.  There’s so much going on on screen that the extra processing power is nice if you want to ensure that solid 60FPS frame rate but honestly we couldn’t care less about frame rates unless they dip so far as to make the game unplayable and that wasn’t ever the case on Tesla vs Lovecraft  on PS4, despite the action being just as intense.

We’ll keep shouting about how good these 10TonsLtd twin-stickers are (well, not Time Recoil but certainly all the others) and hopefully they’ll keep making them because, for us at least, they’re the new masters, even bettering Housemarque and that’s no joke.  Tesla Force does not disappoint at all.  Great action, great upgrades, great fun.  Get onto it today.

Tesla Force
8 Overall
Pros
+ Breathless action
+ Deep, satisfying upgrades
+ Just look at those screenshots!
Cons
- PS5 upgrades are hard to spot
- Might be a bit repetitive for some
Summary
10Tons do it again with yet another fantastic twin-stick shooter. If blasting a huge horde of demons with more firepower than you've ever seen on screen before sounds like fun, well... that's because it is. Tesla Force is fun. Big, exciting, relentless fun. The shoot 'em up genre taken to the limits and we love it.