Games focusing on famous worldwide conflicts are nothing new at this stage. It seems that not a month goes by that another war game is announced or discussed in some manner. You can thank the late 90’s and early 00’s for this, this was when the likes of Medal of Honour: Allied Assault, the early Call of Duty games and Battlefield made boots-on-ground historical violence into an enjoyable pastime. Back then, it was almost a joke, that every shooter had to be a realistically depicted (for the time) experience that harked back to the Normandy invasion from Saving Private Ryan.

Of course, things have changed somewhat. While this seeming obsession with world wars has continued, gaming has moved onto other things. Notably, in the not so distant past, we had that surge of modern warfare titles that took the focus away from old conflicts and fantasising new ones. This journey took us to the middle east, across Asia and even into space. With things going as far as this into sci-fi territory, it was only natural that some would start to miss the previously saturated historical shooter, the kind that focused on men with rifles and oppressive European theatres that rely more on skills, tactics and less showboating.

There was also the fact that very few developers would want to take what has come to be known as the first great war. When you think about it, it doesn’t really make for much of what you would consider a game to be. The weaponry was slow and ruthless, when you got shot you usually wound up dead and everyone was bogged down in muddy trenches, quite rightly staying put for the most part, lest they wind up in no man’s land with only bullets to greet them. So, there is some immediate kudos to be given to developer of Verdun and Tannenberg who have taken it upon themselves to try and tell that story in game form, to the risk of not ‘being for everyone’. 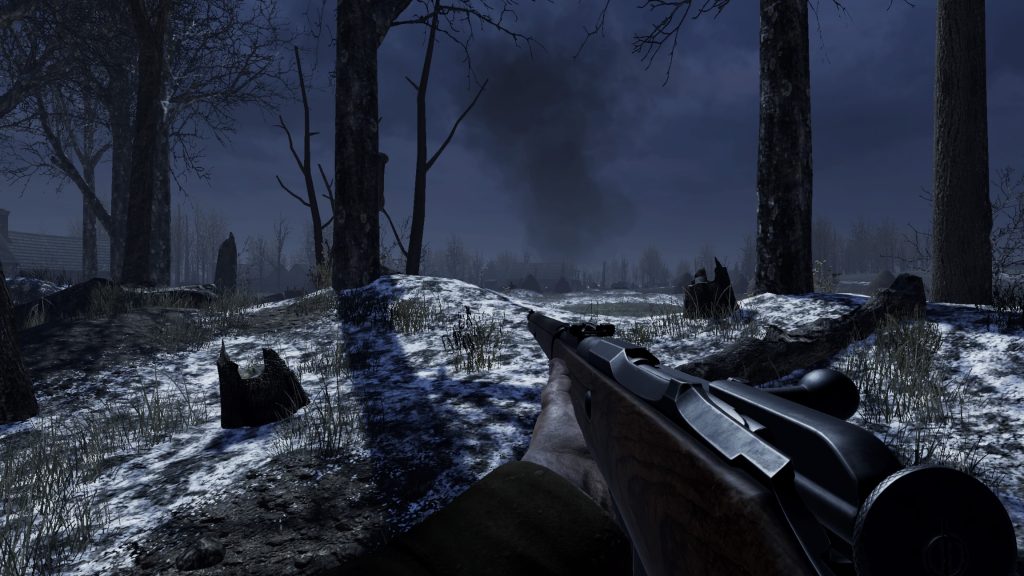 With the WW1 series of games, M2H have carved themselves a niche for representing historical accuracy in video game form. Much like Verdun before it, Tannenberg is more about the experience, the detail and feeling of war than it is about appeasing a crowd that wants instant gratification and respawn times. Instead, Tannenberg seems pretty threatening, where a single unseen bullet landing on the player will result in an instant death, where dying becomes less of a nuisance to something that feels like a genuine detriment to your teams side as you watch a base fall to the enemy and where guns can jam, leading an attempted heroic rush into a moment of despair. It’s oppressive, unforgiving and while I was not there myself, this is pretty much I would imagine the impending sense of danger, the muddy landscapes and vulnerability of the player would seem accurate to the period and setting.

Set on the Eastern Front, Tannenberg sees you battling as one of six armies as they fight for territory amongst the trenches and to gain ground while attempting to diminish the other sides resources. Main mode Maneuvers is a war of attrition, where both sides fight over specific nodes of a large map, with control of the majority resulting in tickets being removed from the opposing forces. For those that enjoy Battlefield, the method goal will feel immediately familiar as it plays almost the same with, with some small differences. For example, having control of certain nodes will assist your side with additional abilities or resources, such as ammo supplies, reduced cooldowns for artillery strikes and mounted machine guns. Connecting controlled territories together also creates supply chains which ensure the squads at the front line are equipped to take on one of the other win conditions, which happens when you take the enemy starting base by first surrounding it, then claiming it for yourself. 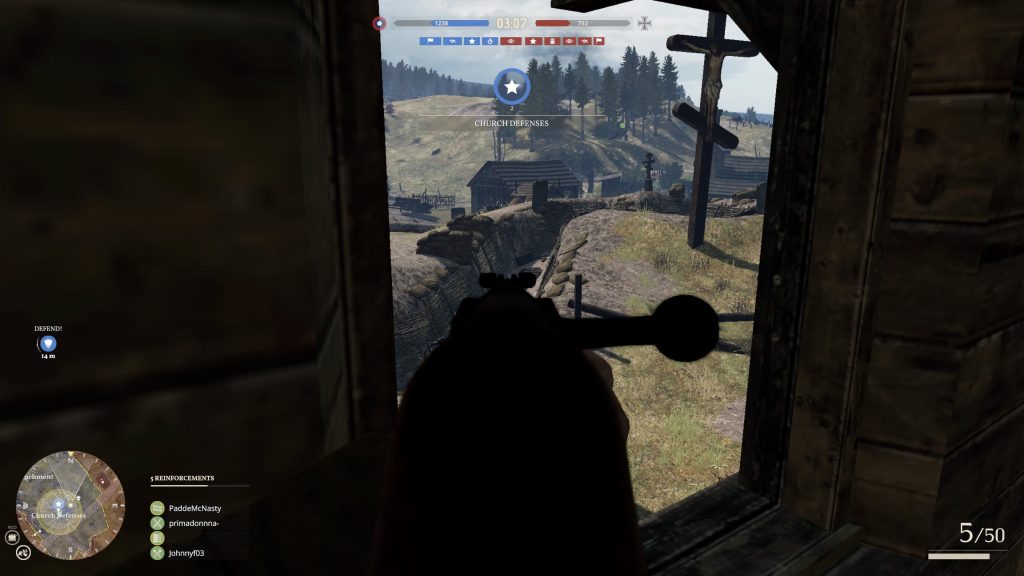 To be successful in this endeavour, Tannenberg requires teamwork. Every player is set into a squad and each player should play a part in capturing territories together for their best chance to win. Doing this will earn players points for contribution and result in quicker captures. Squad roles play into the tactics beautifully, allowing for players to restock ammo for comrades, call in gas attacks or artillery strikes and when you are able to work with your small team to overtake an encampment, Tannenberg, unlike some other shooters really comes into its own.

For a game with no single player campaign, it’s those squad moments that hold more story twists and turns than most blockbuster games can provide and this is all down to that feeling of threat from one shot kill weaponry and that unerring sense that the odds are against you. As previously mentioned, rifles will put down anyone with one shot and accuracy is required to be successful to be able to win a firefight. All to often, you will find yourself being picked off by a player before even knowing where they were and even if you did then panicked return fire will only result in a futile reload animation before the assailant has finished theirs and puts you down for good. 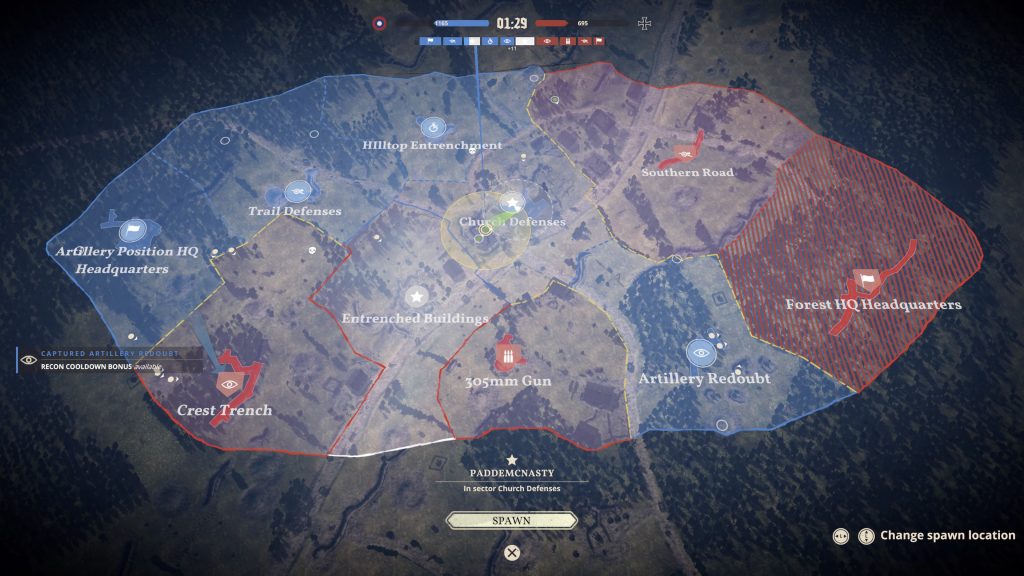 This is where other game modes like Rifle Deathmatch and Attrition Warfare come in, these are more straightforward affair and slightly less interesting when it comes to Tannenberg’s focus on large scale warfare. While these take place on the same maps, these remove the requirements of territory ownership and instead just focuses on the killing of other players to remove tickets from the opposing side. Rifle Deathmatch is your free for all game type that simply sees people leaving the trenches while using skill to put down others while attrition warfare is a straight up team deathmatch.

These modes become a big issue if you fancy them, as while the Tannenberg and Verdun player base is dedicated, it is a somewhat niche crowd. During my time of playing I was met with 129 players enjoying the Maneuvers mode. While attrition saw only 10 players or less and rifle deathmatch featured no one. There are bot versions of these modes to play should you want to try them, but unfortunately, this will never give you the same experience as playing against like-minded players with aiming flaws. The bots are at times very difficult to go up against, with even a glitched one I encountered that seemed to soak up bullets like an ubermensch. 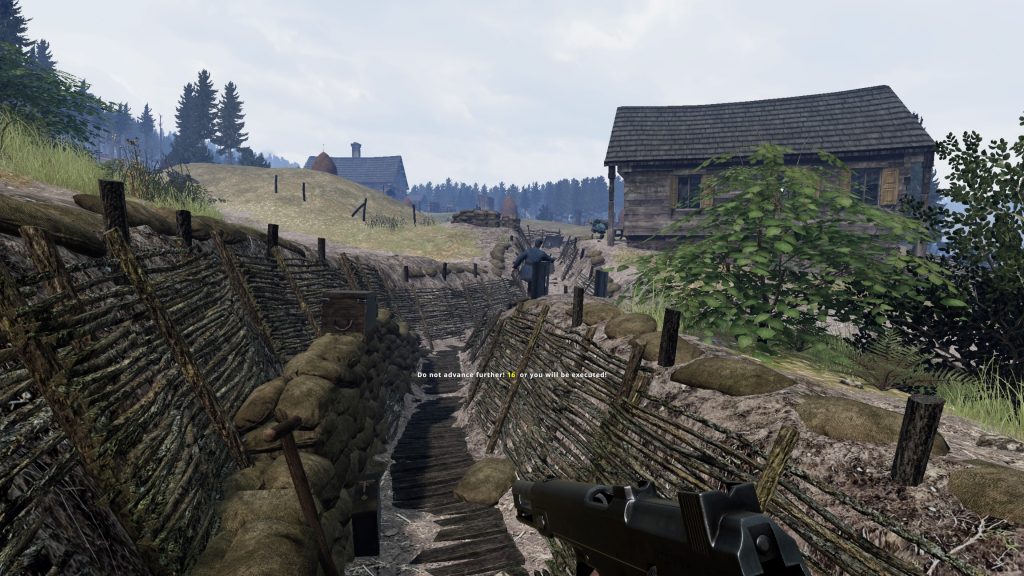 There are a couple of aspects that also makes Tannenberg suffer, but not necessarily at the fault of the developer. For one, this is clearly an indie title with not nearly the same budget that the likes of Dice would get. Visually, things can get a bit ropey and you would be forgiven to think that this game looked more dated than it is. Also, PC fans moving to play with friends may be a bit annoyed that the player count has been reduced from 64 players a map down to 40, but to be honest, with the small overall player count, this is a lesser issue.

It’s a shame that the player count is not as high as it could be for Tannenberg, while there are quite a few things that stop the game from being as accessible and open to a large player base, this is clearly a well made title that goes above and beyond in terms of authenticity.  With any luck, the player base will increase and M2H will reward the player base with further updates like the PC version, extending both the experience and continuing to demonstrate their clear love and devotion to the subject matter.

Tannenberg
7 Overall
Pros
+ Impressive attention to historical detail
+ Maneuver mode is a solid game mode
+ Doesn’t bloat the game experience with needless progression mechanics
Cons
- Player base shortage, not exactly the games fault, padded with bots
- The dedication to functional and historical realism will not be for everyone
- Ropey visuals indicative of a lower budget release
Summary
Tannenberg is a solid and tactical multiplayer shooter with a keen eye for historical accuracy. Lower budget production values aside, M2H have done an excellent job of recreating the realism of being entrenched in the Eastern Front and the constant danger of being caught in No Man's Land.