From solo developer Matt Dombrowski by way of publisher tinyBuild comes retro-tinged roguelite Streets of Rogue. It wears its influences in open view by its title alone. It apes Sega’s classic Streets of Rage in terms of silly plot and setting, and it has more obviously, Rogue-like persistent settings.

Oddly, less so than the likes of this reviewer’s current favourite of the genre Death Road to Canada though.  Or another genre paragon in Rogue Legacy. In this instance, you only really carry over traits when completing a floor as opposed to new playthroughs. 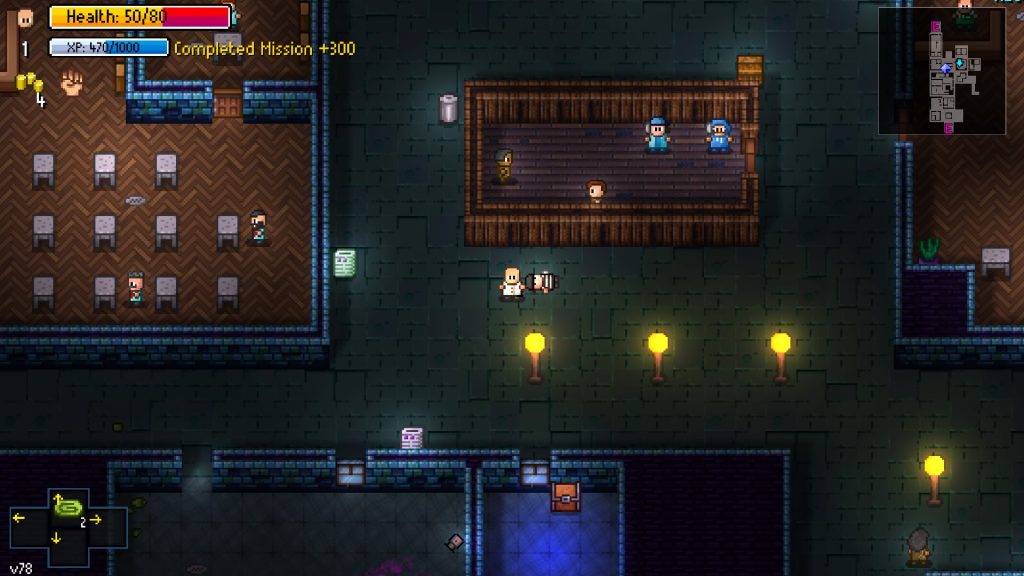 Streets of Rogue is a daft pastiche of the plot of SoR/Final Fight with some silly fourth wall breaking thrown into the bargain. Upon completing the mandatory tutorial showing you how to interact with the denizens of the city, you’ll get thrown into the game proper.

Each sub-level has several  objectives for you to fulfil, be it destroy an object, retrieve an object or kill someone or something. It’s all quite one note and not that engaging, much as the developer obviously wanted to inject a bit of humour into the situation. You can unlock new character types by fulfilling certain tasks during a playthrough, the first of which, Gorilla we got almost by accident. Others you’ll have to make more of a concerted effort to gain access to. 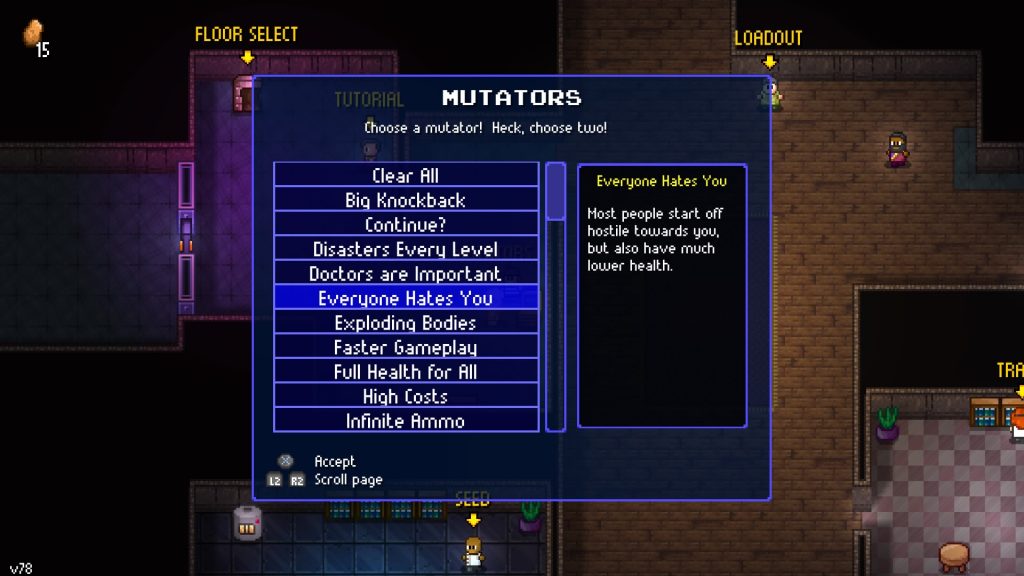 Streets of Rogue should be right up our street (not even sorry), but for whatever reason it came up a bit short in the opening hours. It’s not that it’s a bad game, it’s just not that suited to extended play sessions. Snippets are all well and good but beyond the individual traits of each character type, the gameplay isn’t that varied. That coupled with the enduring silliness and almost Benny Hill like chases when you end up with a large train of people out to cleave your skull in. All that’s missing is Bob Todd (the little bald fella Benny slapped on top of his head repeatedly) or a bevy of women in bikinis. 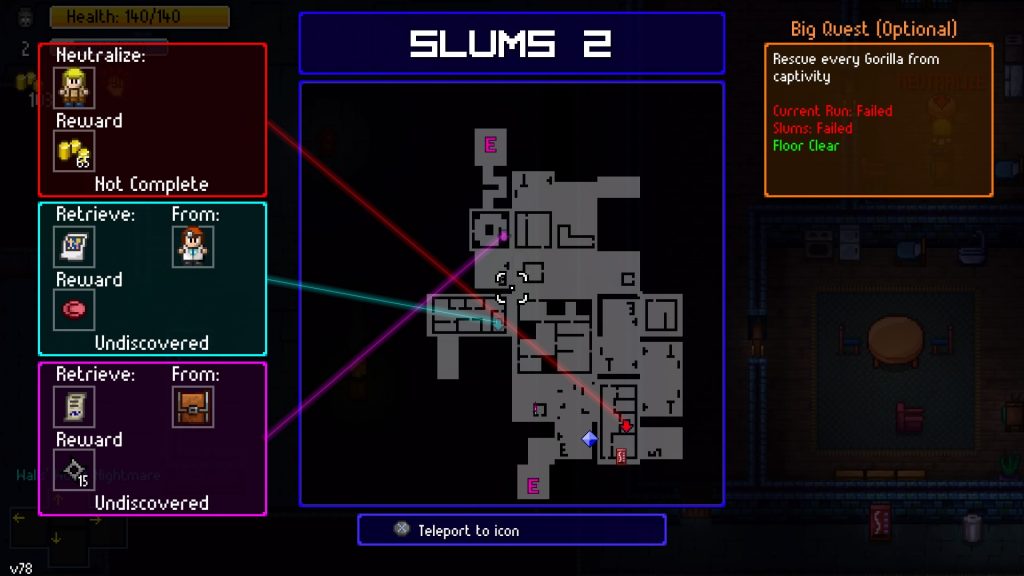 Oddly, after a while, something clicked for us with Streets of Rogue. We’re not quite sure what, but upon returning to garner a few more screenshots for our review we stayed and played some more. The emergent gameplay becomes evident when you enter a floor and factions are having a fight amongst each other. Or you choose the (unlocked) zombie player class,  infecting a couple of NPCs and letting them wreak havoc. The vampire player class, unlocked by destroying sufficient gravestones in a level, is also great fun. You can’t  eat normal food, your health only being replenished upon feeding on an unsuspecting meatbag. 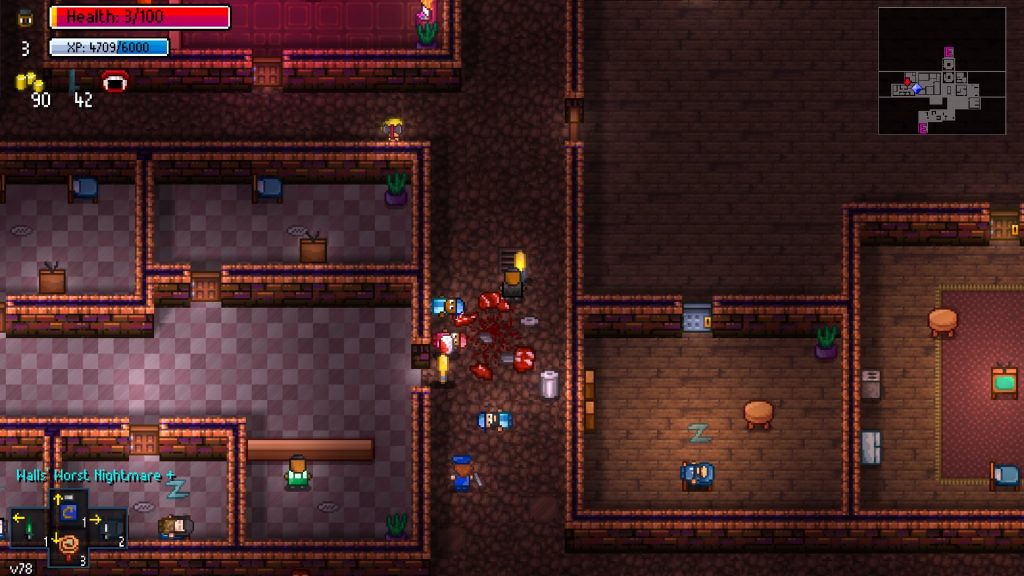 As you may be familiar with having played Rogue Legacy et al, sometimes a runthrough can be over almost as soon as it’s started. That definitely applies in the case of Streets of Rogue, but as opposed to switching off and playing something else, we stuck around this time. Perhaps having too many other games on the go diluted our focus a little, or maybe it was the fact that the country was melting last week that sitting in a darkened room   playing this wasn’t our main focus. At any rate, SoR is better than we initially gave it credit for.

Rather than gushing all over this, as some reviewers already have done, we’re cautiously saying Streets of Rogue is  worth your time. The retro style and dip-in/dip-out gameplay woujld lend itself well to play on the PS Vita, indeed there’s a version available on Switch. Far be it for us to suggest you pick it up on that instead, the observation remains. You might have the same issues as we did in terms of the slow start, but we recommend you give it a fair crack of the whip even if that happens. 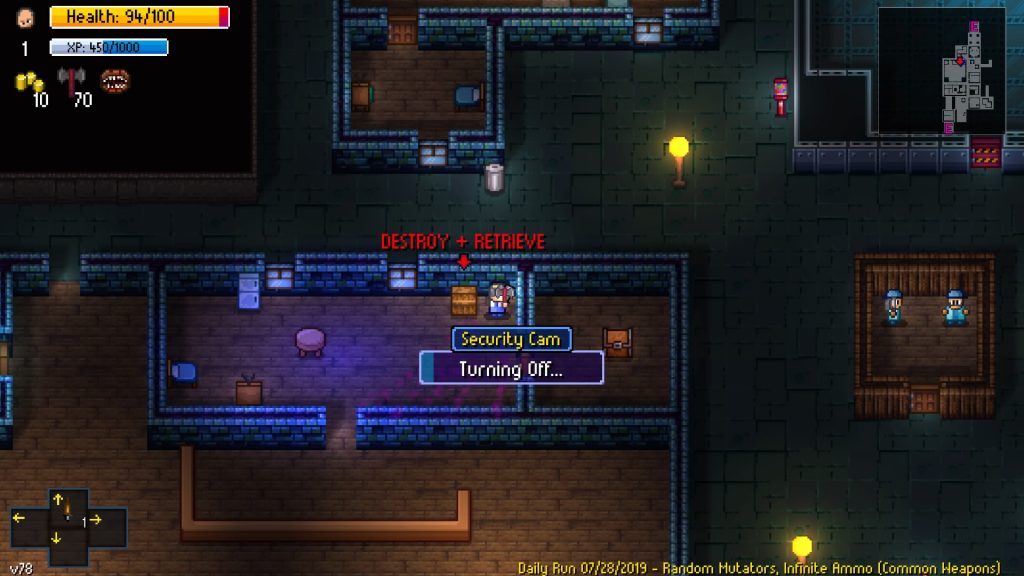 On top of the main game mode, you can attempt a daily challenge mode which isn’t procedurally generated, each objective being fixed for the duration of the challenge being available. These are modified by mutators such as infinite ammunition or overly aggressive police, to give two examples.

Each character type has a ‘big quest’ you have to fulfil. For example, in the case of the vampire it’s to kill any werewolves you might encounter; zombies it is to turn X number of NPCs to zombies. It adds another layer to the game that is most welcome.

All in all then, Streets of Rogue is very much the slow burner in terms of immediacy, but once you get to grips with its systems you’ll probably end up hooked like we are. A cautious recommendation then.

Streets of Rogue
7 Overall
Pros
+ Gets very addictive... eventually
+ Interaction between factions without your involvement
+ Meta-game adds layers to otherwise shallow gameplay
Cons
- Might not immediately grip you, it didn't us
- Perhaps a bit hard to start out
- Slavemasters are pricks. Seriously , fuck those guys

Summary
Streets of Rogue is derivative and initially uninspiring but somehow comes out addictive and rises above. Just a shame there's no Vita port as it would be a great fit.