This reviewer has their comfort zone, typically we go for quirky indie platformers or puzzle games that are best suited to short gameplay bursts. But occasionally it’s nice to push your boundaries and play something a bit different. To wit, FIA European Truck Racing Championship from developer N-1 Racing by way of publisher Big Ben Interactive is one we’d typically leave for our man Mike.

But we’re really glad we took a punt here as FIA ETRC is a window into what you might deem to be a slightly less glamorous facet of motor racing. Based as it is on the European championship promotion, the roster of drivers is largely made up of the real-world participants of the series. For example, fans of Jochen Hahn, the five-time championship winner are well catered for.

Unlike Big Ben stablemate Tour De France 2019, driver likenesses aren’t an issue as helmets remain firmly on throughout. So no weird clone line-ups on the podium in this case, but balding middle aged men would be a welcome videogame depiction.

We’d usually grumble at a mandatory licence section, but in the case of ETRC, we welcomed it as it was a great primer to the somewhat idiosyncratic handling a five-tonne racing truck exhibits. 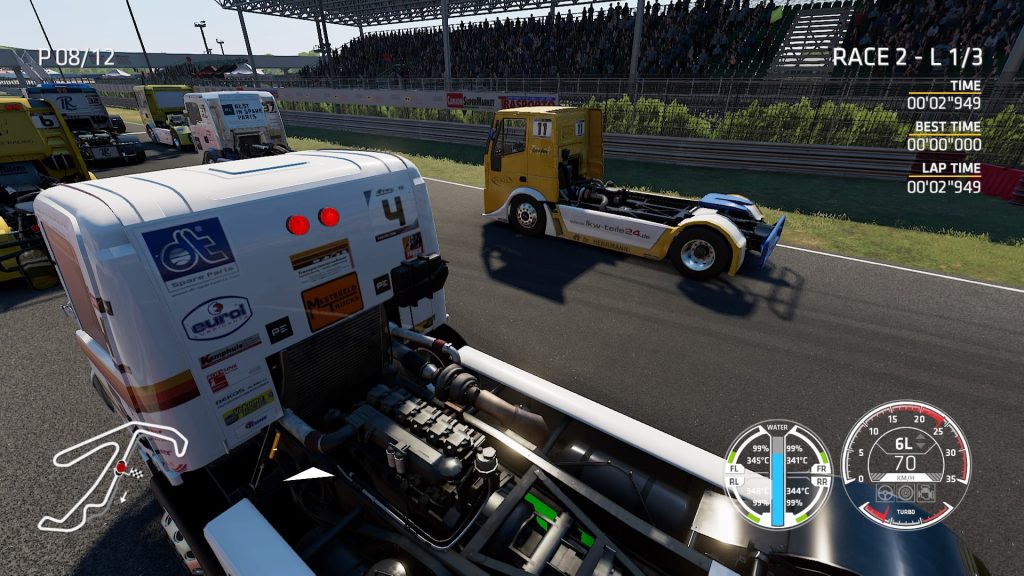 For a start, a five-tonne tractor unit is a bit front heavy due to the cab area containing the engine and passenger cabin. Subsequently braking is a bit more of a fine art than on a smaller vehicle, the brakes generating a fair bit of heat. That heat has to go somewhere, in this case brakes are manually water cooled by the driver.

In the case of ETRC this is implemented by tapping

, we have to confess during our introductory race we found ourselves off the track more often than not. When prompted to cool our brakes we were more than slightly baffled.

Thankfully the excellent licence section serves as a worthy tutorial, its arbitrary nature being great preparation for the race series itself. It introduces the brake cooling mechanic in detail as well as getting you used to braking distances involved here. It brings to mind the classic Gran Turismo licence tests a little, only instead of a small saloon car you’re throwing around a rather larger vehicle. 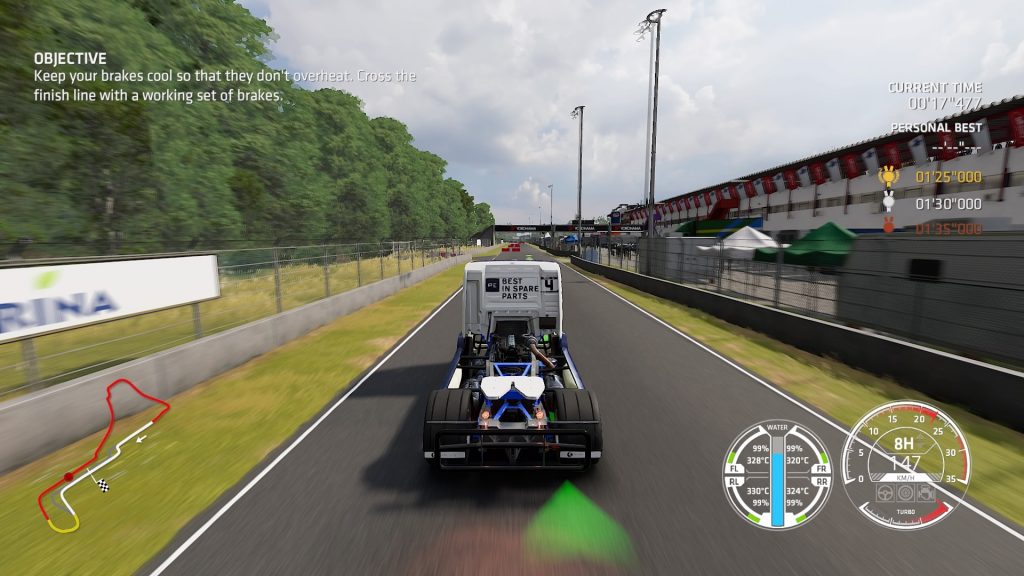 Upon completing this section, you’ll unlock career mode proper which grants you access to the real life eight race ETRC series and a few tracks outside Europe bundled up into the six race World series. We concentrated on the former option as that’s the main focus here.

Beginning as a rookie driver you’ll first be thrown into a practice at one of the tracks on the calendar. Your general performance here is ostensibly to get a one race contract with a small outfit for the forthcoming first race weekend of the championship. In reality you’ll generally only be able to sign with one of three or so teams, your initial consideration being how many reputation points you’re likely to garner by racing with them.  The better your reputation, the better your chances of locking down a contract with a better team.

You can choose whether to run races at full distance as well as choose difficulty at the outset, though given each venue has two qualifying events spread across the four races that comprise a race weekend, we chose quarter distance for reasons of expediency. 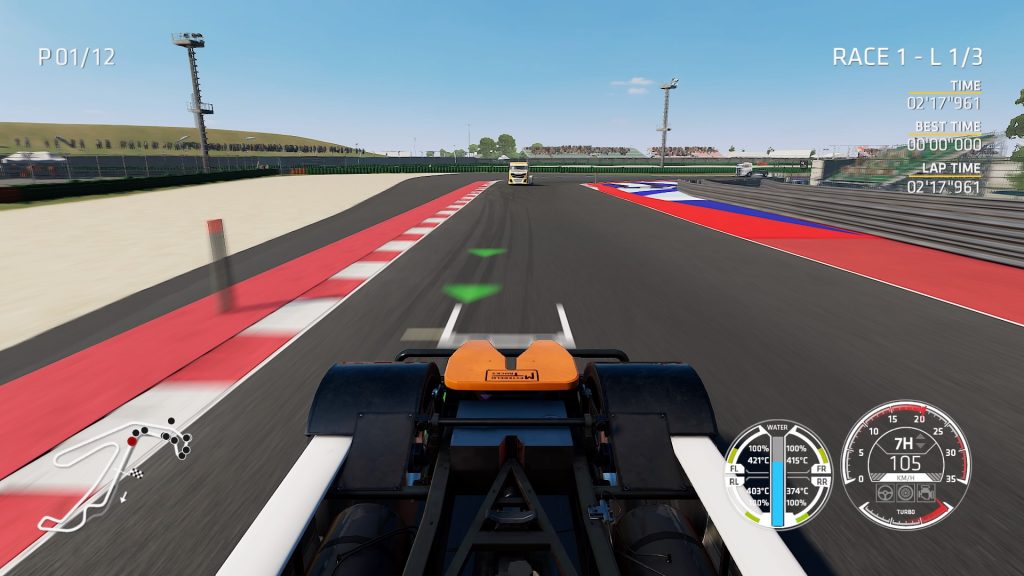 If you qualify well enough in the initial session, you’ll move to the Super Pole to try and gain pole position proper, though we’ve yet to achieve that goal. The AI drivers are a bit odd in terms of times set. Our first qualifying had us place tenth with a good mistake free lap, but we improved our time marginally during the super pole session and found ourselves third on the grid.

In our second qualifying session of the weekend we destroyed our previous best, yet found ourselves eighth on the grid and had to fight through to first place. It all seems a bit pot luck, especially when fast qualifying times by the AI don’t translate to fast race pace.

Eventually you’ll start a race proper lining up with a full field of opposing racers. As is typical of single seat formulae, the initial scramble to the first corner can often prove the most chaotic period of any race, the same applying here. There’s bumping and nudging here, but any significant impact is penalised with a time penalty. 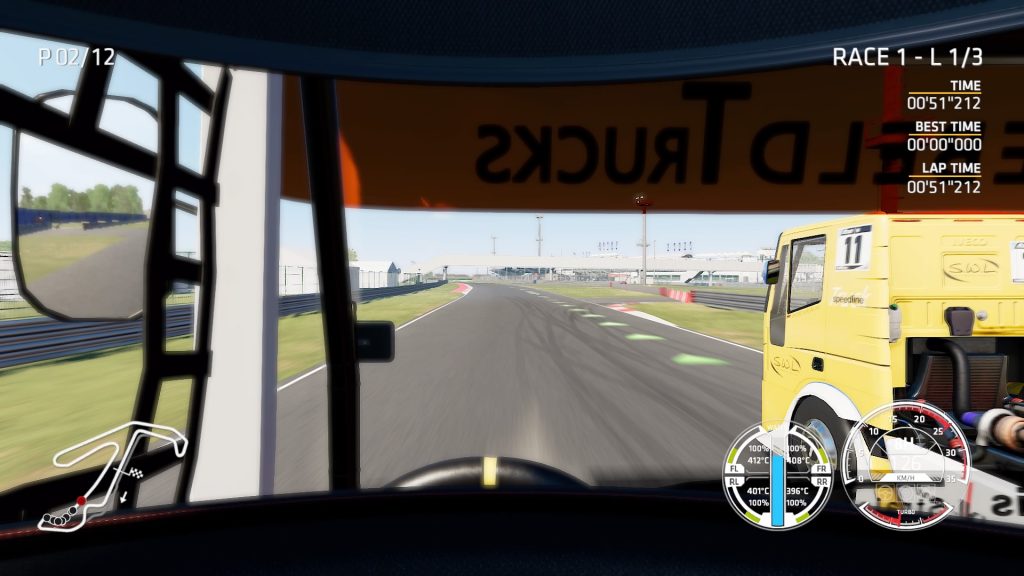 Just as hitting one penalty marker by cutting a corner doesn’t elicit a penalty, hit a second and you’ll get thirty seconds applied to your final race time. Given you’ll do well to get a ten second lead even on beginner difficulty, this generally elicits a restart. Thankfully you can restart a race without penalty, this makes for a more forgiving outcome than crashing out through no fault of your own in a first corner collision.

There are also penalties for exceeding 99mph (aka 160kmh), we expect in the interests of real-world safety, though generally you won’t be able to reach those sorts of speeds in race situations. At least not in the stock trucks without any upgrades applied anyway. However punitive this may feel, it’s refreshing in a racing game for your infractions to be treated with harsh penalties as you won’t do it again.

Each race weekend is split into four races, broken up by two qualifying sessions. These never feel like a chore, as unlike the endless parade of F1 games, the tracks are largely unfamiliar to all but the most hardened racing game fan. 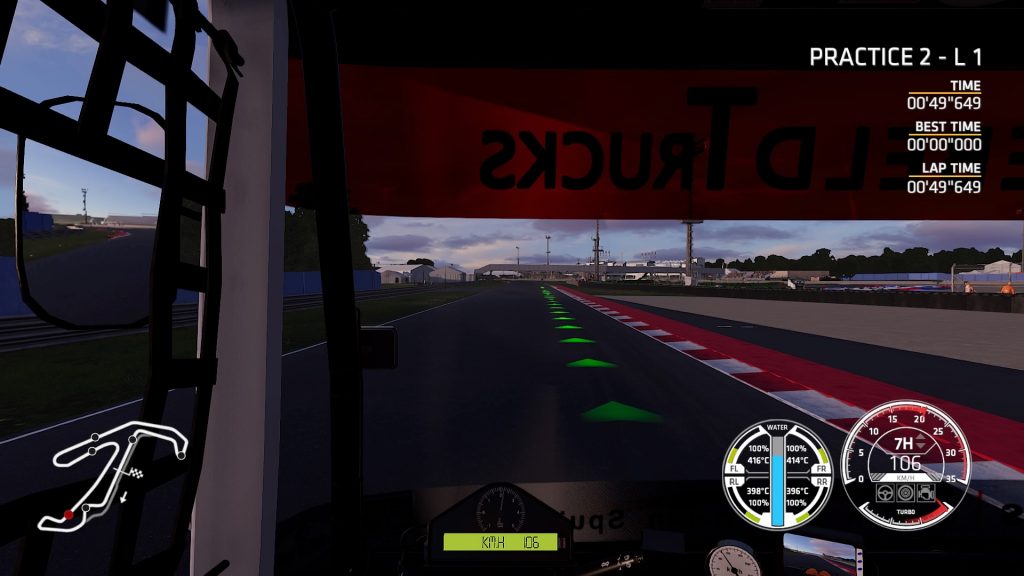 Completing a race weekend  gives you a nice summary of your progress across the four races along with an indicator of your team’s morale. In the event you’ve just completed a one weekend contract, this seems a little irrelevant. We managed three first places and a fourth and weren’t offered a contract extension for doing so. This feels bit silly, but reflects the gig culture many privateer drivers probably find themselves in.

Those of you used to the likes of Codemasters’ F1 or Dirt series may find themselves put off by the somewhat spartan presentation on display here, but this reviewer  finds the lack of extras refreshing, having long since switched off from the likes of the Forza series on Xbox. 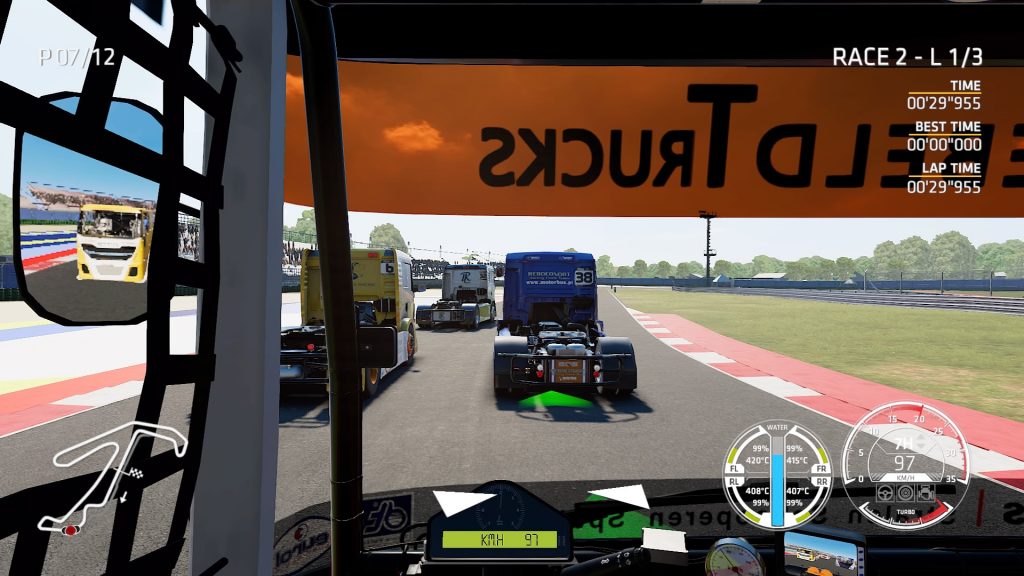 Anyone else, enjoy FIA ETRC for what it is, an accomplished depiction at niche motor racing seldom seen outside Eurosport or as part of “wackiest racing crashes ever ever ever!!!” viral videos. The four races per weekend and fourteen individual tracks make for a lengthy lifespan, comparable with any other game.

You might get bored driving the same track four times over, but to be honest if that happens this probably isn’t the game for you.

In conclusion, FIA European Truck Racing Championship is an excellent glimpse into a facet of motor racing seldom seen. It might lack the glitz and glamour of Formula One or Moto GP, but at least it’s not Formula E. That we’d not wish on anyone. We’re going to keep playing this quite a while yet.

FIA European Truck Racing Championship
8 Overall
Pros
+ Truck racing is fun, plus a road less travelled in terms of track choices
+ Licence tests set you up well for career mode
+ Rewards careful considerate driving
+ You can restart races without penalty
+ Lots to do here
Cons
- Spartan presention might put off some
- Inconsistent AI behaviour in qualifying compared to races
- Some might find four races per weekend a bit dull
- Full race distance is default option, you'd do well to drop it to 25%
- In early stages at least, your performance seems almost irrelevant
Summary
FIA European Truck Racing Championship is an excellent glimpse into a facet of motor racing seldom seen. It might lack the glitz and glamour of Formula One or Moto GP, but don't hold that against it. We're going to keep playing this quite a while yet. Recommended!