Roguelites are a tough genre for me to get into. The random nature of them can sometimes make me struggle to find a foothold whilst the permanence they do offer sometimes tends to fall short. Sparklite, from Red Blue Games offers a cutesy, retro aesthetic with a more accessible blend of combat and exploration. It works, at least at getting me through the door. 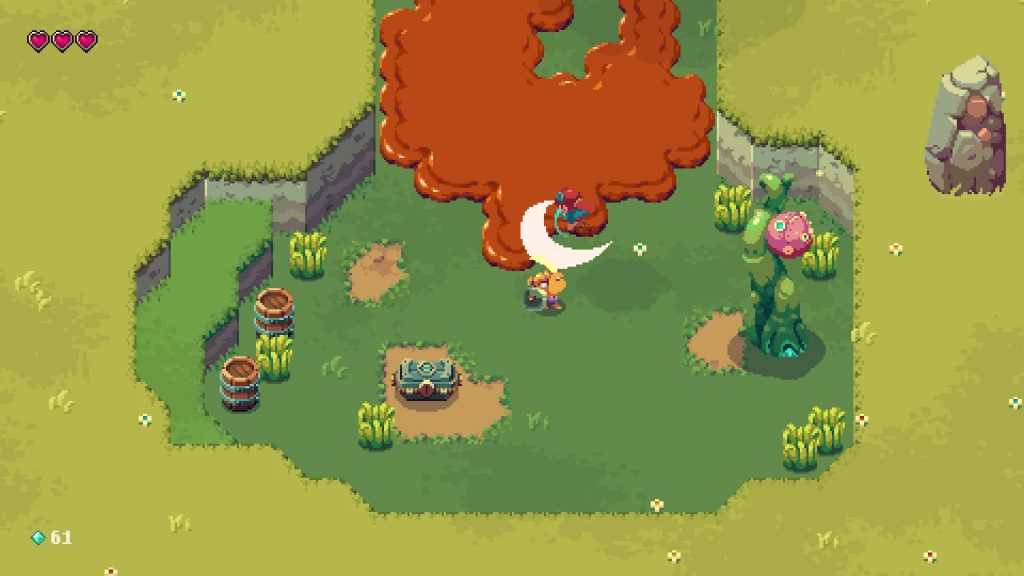 Sparklite‘s story is light and tasks our ship-wrecked heroine Ada with stopping an evil Baron from using the five stones to gain untold power. It’s basic and, along the way you rescue associates who can help you on your way. They don’t tend to offer much additional storytelling and, to be honest, the only story prods you get are when a boss is defeated. It’s uncomplicated, unobtrusive but a little lacking.

It’s easy to see where Sparklite‘s influences lie. Stepping out into the world of tiles, you see the homage to Zelda being paid in full. Your health is represented in hearts, chests open with a familiar chime and some early enemies wouldn’t look out of place in Hyrule. Your main form of attack is a multi-tool which delivers swipes and can transform into a hammer for charged efforts. At the beginning, enemies are simple to defeat. They have predictable attacks and defeating them nets you the titular sparklite. This currency maintains throughout runs which you can spend to earn permanent upgrades.

Upon death, you lose any items you’ve accrued and return to home base. Here, you can put your well-earned spoils to use. You begin with a medical bay where you can equip badges to effectively build-up your skills. You start with a small grid where you outfit any badges you’ve found in the world or bought at the medical bay. There is a hard limit to your inventory but excess badges can be fused to create more powerful versions. This is crucial to maximise your grid and this character building process can feel quite methodical. 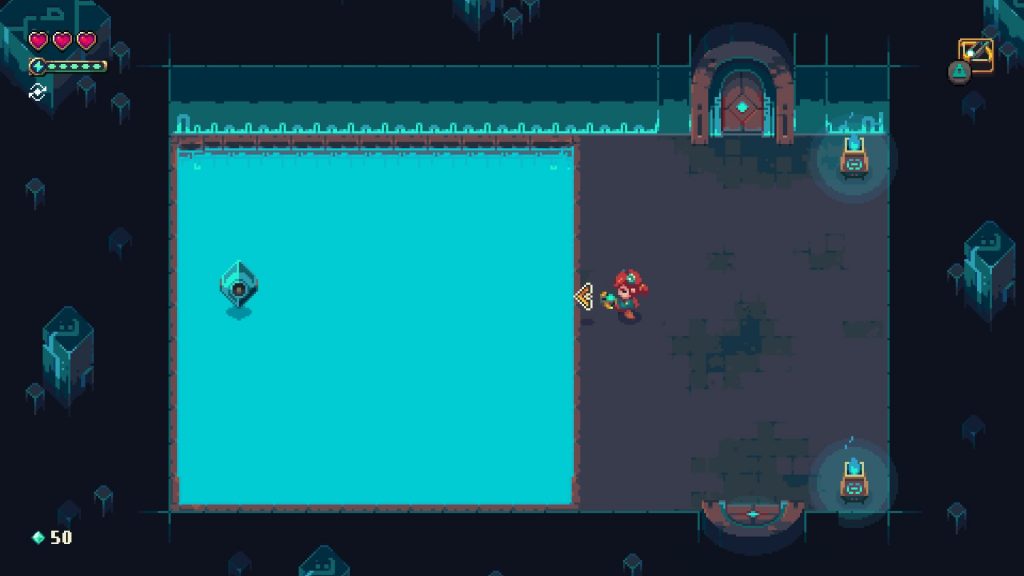 As you find more vendors and return them home, you have more options at your disposal. Widgets now can be found for free and a workshop can be used to craft new sub-weapons. These require energy to fire which can be topped up with consumables but mostly get replenished by attacking enemies. I mostly used them for puzzle solving and they’re introduced in easy-to-grasp puzzle dungeons. They open up new traversal opportunities and really expand your ability to explore.

There’s reasons to do so with beats acting as the primary collectable. Being a roguelite, the geography shifts on you each run and there’s always sparklite or items to gather. Sometimes paths lead to combat challenges or puzzles for badges. Whilst the game started to feel small in that middle stretch, it is densely packed with things to hunt for. 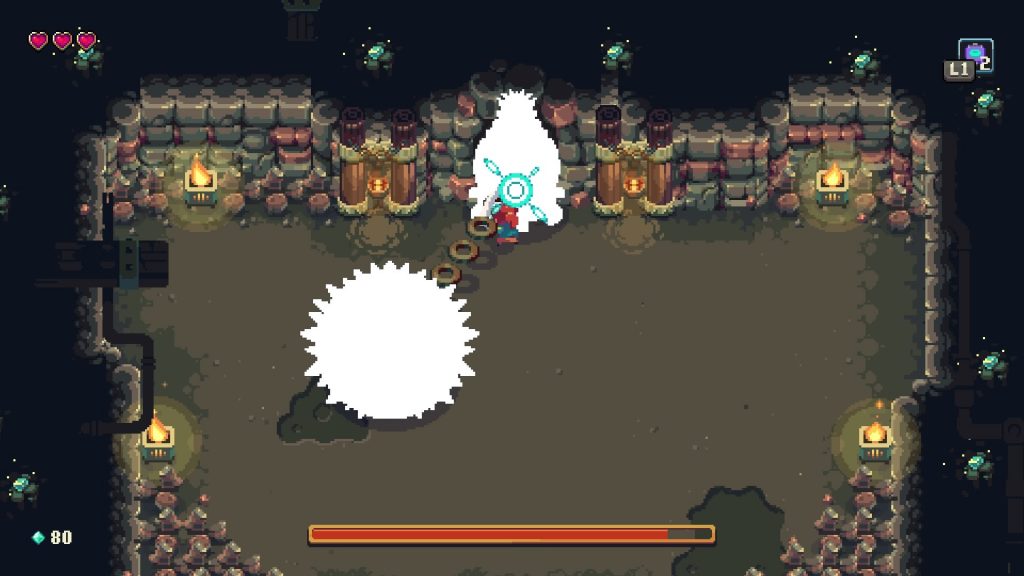 It begins slowly but, after upgrading the medical bay, Ada was more resilient, could hit harder and the pace of the game quickened swiftly. If there’s one complaint about the badges, I’ve rarely found any beyond the standard bronze versions.  You can combine badges of a lower tier to upgrade them but the shop only feeds you three upgrades at a time, usually of energy, health and weapon power badges.  I’m in a position late game where I want more power for my basic attacks.  Unfortunately, I need to purchase a badge for my gadget just so that upgrade might populate on the next run.

There was a point with Sparklite where my momentum really took off. Each of the game’s five areas has a boss with the rest of the world ready to be plundered for widgets and currency. With a fully upgraded medical bay, I had a build capable of running from boss to boss. Whilst the map is connected, you can’t progress to the next area without beating the titan. These boss fights are interesting to look at but, like the enemies around them, they have predictable attack patterns you can exploit.

They fit thematically with their respective zone and look imposing. They didn’t really present me with a challenge until the final boss. It does help give the game some finality and tests your skills but, it felt at odds with the rest of my time with Sparklite. Mainlining the bosses was a misstep by me as the final boss became a gauntlet of overpowered enemies. It can make the game feel artificially stretched as buying badges becomes more costly over the course of the game. It presents a barometer of whether you’re ready for the fight but, given how easily I tackled the other titans, I felt a little misled. It’s a shame the challenge can seem uneven. I know roguelites revolve a lot around failure but the middle of Sparklite gained some real speed. 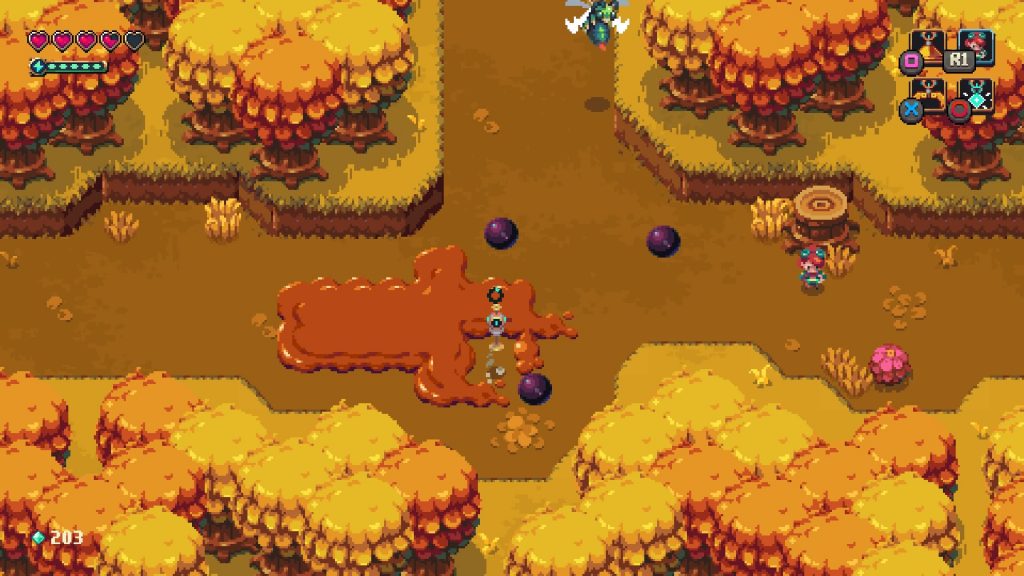 Sparklite‘s aesthetic and soundtrack combine cohesively. The cheery music compliments the twee visuals and there’s some good animation on display. Trees move in the breeze, poison pools bubble and the enemy variety shows a lot of character. They recycle them throughout the story but there’s still enough tweaks not to be bored by the repetition.

For a game that slows towards the conclusion, I’m still putting the time into it. There’s a compulsion to boosting Ada’s abilities and seeing tough foes become fodder. I do wish the shops were smarter about surfacing the upgrades you actually wanted but, even with the grind, there’s a decent pay-off.  The inventory system has some problems but the extra gadgets give you plenty of options.  Above all, it’s the first roguelite in a while that’s had me compelled to put more time into it.

Sparklite
7 Overall
Pros
+ A coherent, adorable art style.
+ Great, whimsical soundtrack
+ Combat can give you plenty of options at your disposal.
+ Plenty of diversions to pursue for extra gear.
Cons
- The brisk pace is halted by a troublesome endgame.
- Shops don't always stock the upgrades or items you really want.
- No way to discard unwanted items.
Summary
Sparklite is, for the most part, successful at being an accessible, enjoyable roguelite. It falters in terms of pacing and, whilst the tale can sometimes feel brisk, the final area really forces you to hunker down for the last challenge. It's a fun ride that stalls towards the end but there's a good sense of progression as slice and save towards the big upgrades.

One thought on “Sparklite – PS4 Review”