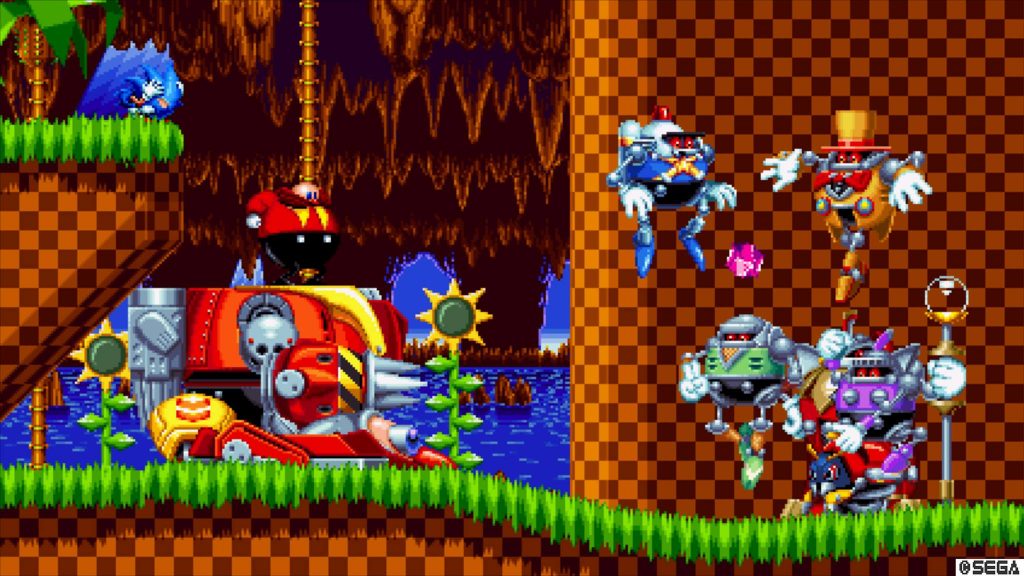 It may never be known, but I will always wonder if Christian Whitehead and his legion of fan game designers knew what they were getting into when pitching Sonic Mania to Sega. Not only were they presenting a love letter project, they were also carrying the burden of two decades worth of fan expectation. An expectation that was born when the Sega Saturn came and went without a mainline Sonic title to accompany it.

Sonic Mania is basically the game we never got. A direct/ clip show sequel to what many claims to be the last good game of the franchise, Sonic 3 and Knuckles. Ignored are the melodramatic storylines of the 3D titles, the overabundance of friends that came along to muddy waters and the shonky guitar laden soundtracks. Sonic Mania is a representation of the series at its simplest, the kind of entry that Sega seemed almost frightened to release, but now it is here and it’s about damn time too.

The storyline, as you would expect from an 2D sonic title is light and all the better for it. There is a loose narrative of Robotnik (It’s based on the classic games, so it’s Robotnik, so you can shut it.) getting hold of a time warping stone that transports Sonic, Tails and Knuckles through time and space. Robotnik isn’t alone, he now has a crack team of egg shaped robotics known as the hardboiled heavies whose prime directive is to get in your way and generally be a nuisance as boss fights. 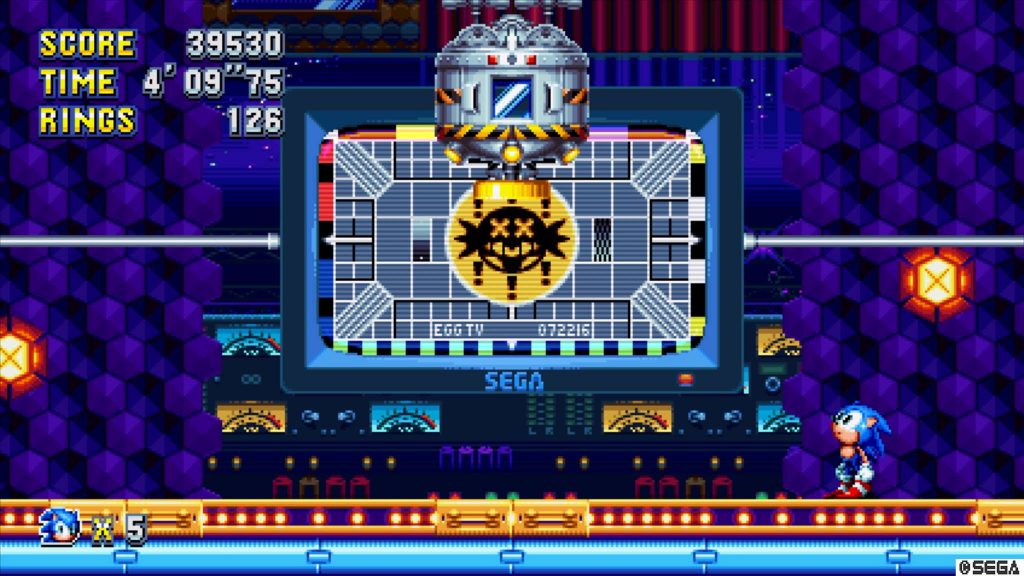 The levels at first glance can give the impression that this is simply another anniversary title in a similar vein to Generations, where previously you would be met with slightly off physics and simple geometry rearranging. Sonic Mania is so much more than that. Each level maintains that retro feel thanks to Christian Whitehead’s faithful Retro Engine while also at the same time being a beast all to themselves. The opening act of Green Hill Zone demonstrates this perfectly. For the opening few seconds it will feel like you are playing Sonic One again, but after a few seconds you will realise that this is not the world you remember as it breaks up and branches off in several, carefully conceived directions.

But things get really interesting when you enter each stage’s Act 2. Much like moving from act to act in Sonic 3 there are background transitions that change the way in which the level looks, but also in some cases, how the level plays entirely. The return of Oil Ocean is intriguing to say the least. The first act plays on as you would expect and in familiar mode. In act 2 however, fire comes into play with the oil itself, toxic fumes permeate the air and saps rings. To temporarily stop this from happening you must find switches that flush the air similar to how you would turn the lights on in Sandopolis Zone from S&K to banish ghosts. Other shifts can be less involved but still effective, such as with Flying Battery where you are able to traverse outside of the airborne base ala Wing Fortress zone, with the added caveat that there are raining and wind weather effects to contend with. These elements breath new life into familiar territory and transform them into into something unexpectedly different. For this section of the review i could easily list off the things that made me smile with surprise, but there simply isn’t enough time.

As with all Sonic games, there are the special stages to consider. Sonic Mania has two styles. Rather than repeat the Sonic 2 halfpipe for the umpteenth time they have instead gone for a Sonic CD like stage where you must chase down a UFO that is carrying the emerald that you want. The other special stage sees the return of blue spheres from Sonic 3, these are optional but they reward medals that unlock extras outside of the main game such as 2-player competition mode and time attack. The UFO catcher stages are fantastic fun, with your character being represented in the criminally underused polygonal style from the Saturn days. These control exactly like the CD bonus stages and aren’t overly difficult once you get the hang of them. 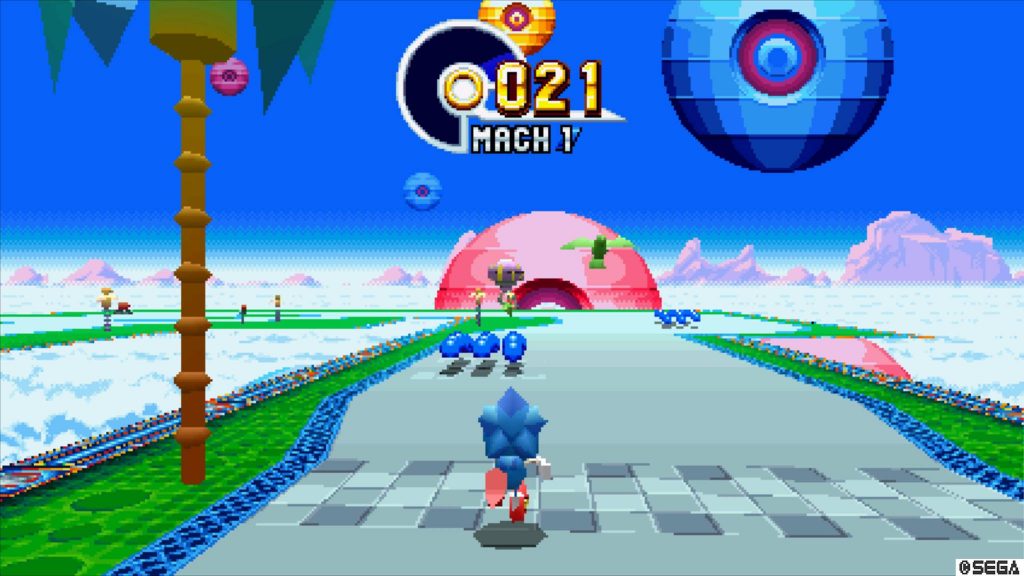 However, I did find the blue spheres stages to be a bit on the weird side. I’m breaking cover here, I have completed Sonic 3 and Knuckles more times than can be considered normal and healthy by human standards, but for some reason I find these a tad more difficult than they used to be. I’m unsure as to whether this could denote input lag or that the speed increases come earlier or more frequently but they just don’t feel as ‘right’ as should do. This could well just be me however.

One of the strong points for classic Sonic games was in their exploration.  Mania rolls with this and as such is filled with nooks and cranny’s that reward the player with easter eggs and more opportunities for speed. This is further compounded by the inclusion of Tails and Knuckles with their signature abilities that allow them to fly and climb. Both abilities have been explored in greater detail than what came previously in Sonic and Knuckles. There are far more opportunities for Knuckles as there are more otherwise unbreakable walls that litter pathways. His climbing comes in handy often with entire sections dedicated to the ability that are hidden to the other characters.

Knuckles isn’t the only character that has benefitted from extra consideration. So has Sonic with the addition of the new drop dash attack that allows him to spin up in mid-air, resulting in a speed dash when he touches the ground. While this would be rarely utilised for most players as you can get by just fine without it. It exists as a new fun toy to play with and one that will help players pick up and maintain momentum as they venture forth. 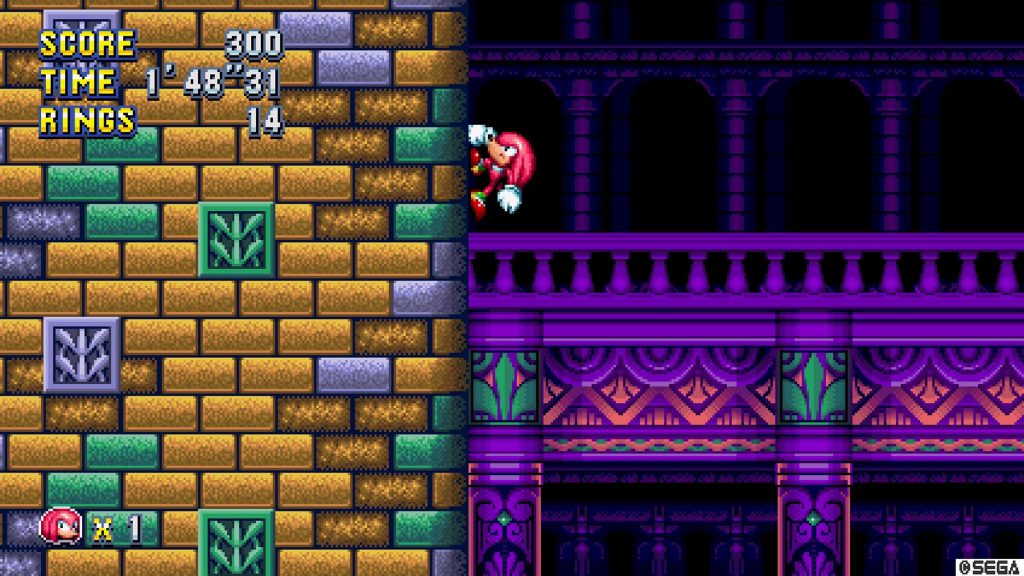 For me there is one thing that I continually return to the series for and that is the original soundtracks. For some reason, even in the darkest days of the Sonic’s history, this is the one thing that shines through and Sonic Mania, by way of fan composer Tee Lopes absolutely nails it. Taking cues from the advent of early CD rom instrumentation that was prevalent in Sonic CD and Sonic 3D on the Saturn the soundscapes and level themes have that upbeat funk to them that have etched a permanent spot into my brain. Classic levels sound utterly rejuvenated with respectful renditions playing in the first acts while the second taking on a whole new form. New levels slot right in, from the joyfully sleazy Studiopolis to the Shinobi inspired Press Garden themes, they both sound like they belong in a Sonic game and most importantly, are believably retro.

From the amazing music, great level design and the return of momentum based platforming, Sonic Mania is an absolute blast. Not only could this be considered one of the best 2D titles from the extended legacy of the hedgehog, but it very well might even be THE best. this is certainly the one that i would stick under the nose of anyone that ever suggested that Sonic was never good. Because Mania proves them so very wrong. It deserves a place on your digital library and the many hours you should put in to unlocking every single piece of content. Because let’s face it, these type of games don’t come around often.

Sonic Mania
10 Overall
Pros
+ Retro levels have been given a new lease of life in imaginative and often surprising ways
+ The soundtrack by Tee Lopes not only fits with in well with the franchise, It stands amongst the finest it has ever delivered
+ Plenty of replayability thanks to the unlock system, potentially the longest lasting Sonic game in the 2D style
Cons
- Difficulty spikes can sometimes frustrate
- The blue spheres special stages feel slightly off
- The classic Lives system doesn’t really feel necessary
Summary
Sonic Mania isn't only a very good Sonic game. It's a fantastic retro tinged platformer that just about anyone can appreciate. It's beautifully realised, fantastic sounding, passionate and incredibly surprising in so many ways. It not only respects the original games in the franchise, but could well surpass them totally. Mania is a masterclass in retro revival and raises the bar for all who dare challenge it. Get on it fast.