Volition have returned after many wondered where the company go post-Saints Row. The answer is Agents of Mayhem which delivers a single-player, third person jaunt in the same universe. Expectations and curiosity is high. Can the quality of their previous titles can be maintained, whilst delving into a new game with a new cast? 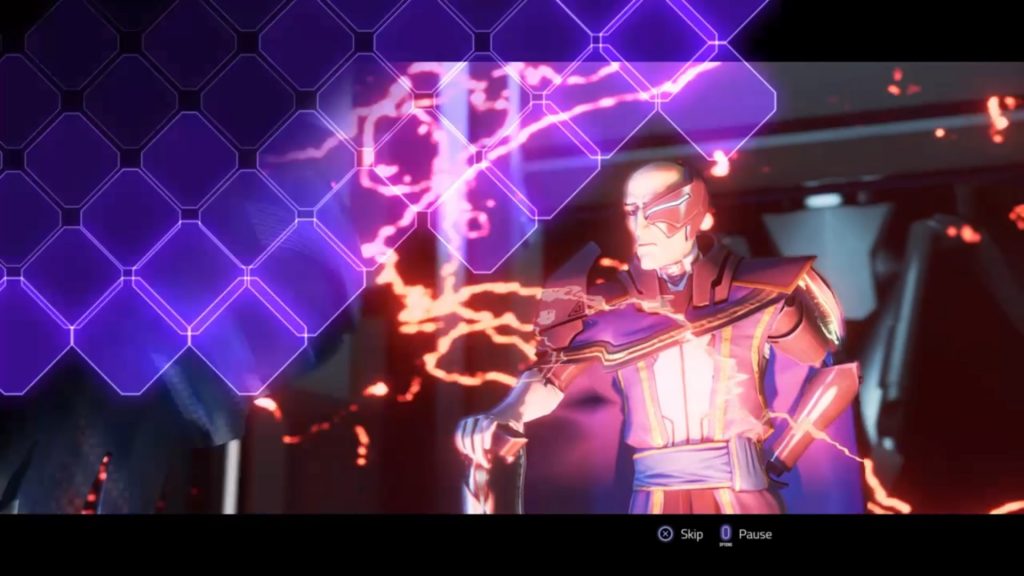 Welcome to Seoul. A mysterious event called Devil’s Night has seen a global threat from Dr. Babylon and his Ministry of Pride. Taking the form of a Saturday morning cartoon (only with more swearing), our Agents of Mayhem are a multi-cultural, dysfunctional bunch of psychopaths intent on preventing his Legion. The cartoon segments do a great job of introducing the key events and players. There’s some larger than life characters on both sides on the fence but the writing is laid on thick.

There’s a consistent look to the world and the cartoon aesthetic doesn’t waver. Volition have been committed to the style and take that approach with the full-blooded writing. A few quips raised a smile but it all strikes me as smarky and somewhat by the numbers. On the Agent’s side, some of the characters feel like exaggerated caricatures that can’t go five minutes without searching for a punchline. They’re introduced well with their motives spelled out in rare moments of brevity. Sadly, you will otherwise be drowned in some horrific one-liners that will put some people off. In many ways, the writing should suit the style they’re after. It’s overdone but worth tolerating. 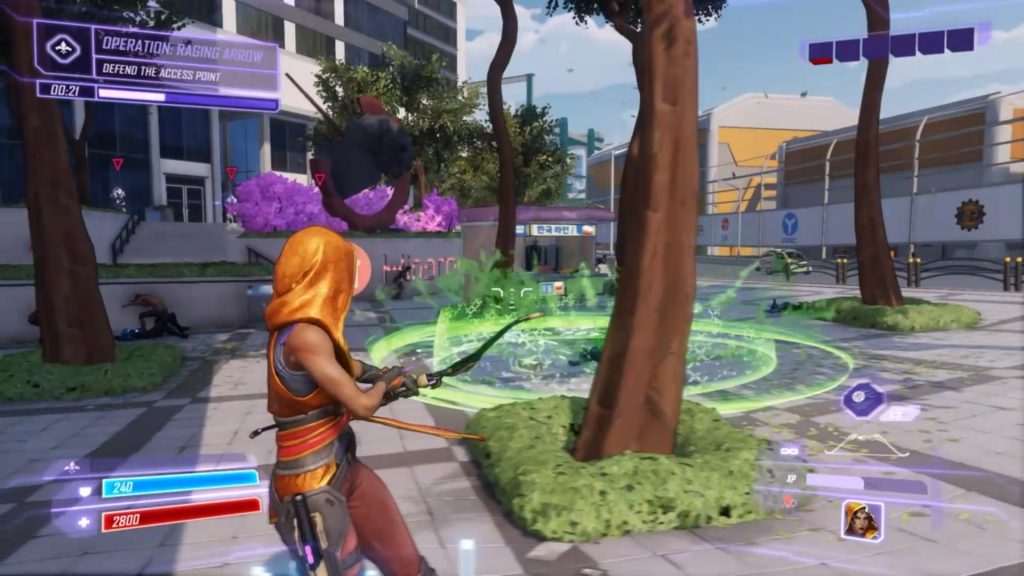 Agents of Mayhem’s gameplay has taken some interesting cues from squad-based shooters like Overwatch. You control a trio of agents and utilise their special abilities and weapons to battle hoards of Legion foes. You swap between your agents on the fly which sadly rules out any potential for co-op. It works well as a single-player experience and each agent earns experience as they kill which goes towards many, many rewards. There’s a compulsion to the game’s grind with something new always around the corner.

Combat revolves around shooting whatever comes your way with special abilities used to deal greater damage or inflict status effects on your enemies. There seems to be a real focus on this element with plenty of unlockables being focused towards buffs of various nature. Utilising your standard weaponry with those additional effects can truly reap damaging benefits. 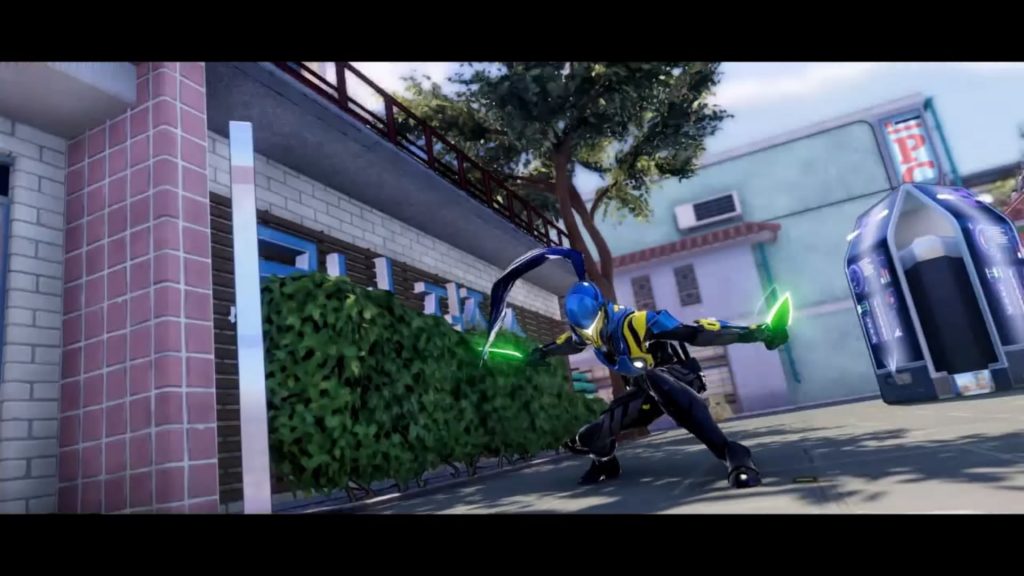 Some agents do tend to occupy similar archetypes but the specialisations help make each one feel viable in different ways. I’ve found myself trying to consider team composition on certain missions. You can get by on your favourites but there seems to be a real incentive to balance your squad out and try each of the dozen agents at your disposal. This rewarding loop is Agents of Mayhem‘s best played card and it never relinquishes it’s grip. It helps keep your hand in the till in spite of the writing and the repetitive mission design.

Being an open-world game ties the game to some well-worn tropes. Saints Row suffered from the same afflictions. Missions arrive in a handful of different forms with main missions being bolstered by side missions and side activities. They all seem to pull from the same prefab materials, sadly. Combat will usually devolve into a battle against waves of Legion whilst you look for something to hack. There’s actually a fair bit of driving thrown into the mix as you tend to spawn far from mission starts or objectives. I find that a little frustrating when you’re having to restart from a checkpoint. You’re not fast enough on foot to negate that but you can call a vehicle at will which will help you speedily reach destinations.

The open world itself carries a nice clean, neon sensibility which is pleasing on the eye. It’s still a game built upon last generation’s technology but it has a distinct look which separates it from Volition’s previous work. Whilst the missions and combat involve the same objectives, they do have the mercy of being bite-size. Some are over in a matter of minutes with only the main missions feeling more fleshed out. They sometimes conclude with a more interesting scrap against larger enemies or a boss fight. The latter offer a welcome breather as you puzzle those out. The encounters with Legion’s Lieutenants come with their own unique arenas and set-pieces. I was expecting this game to deliver on a power fantasy but the way Agents of Mayhem deals with difficulty is fun. When you select a mission, you’re handed a recommended difficulty which incrementally increases as you progress. It offers decent challenge which, again, helps stave off some of the repetitive aspects. 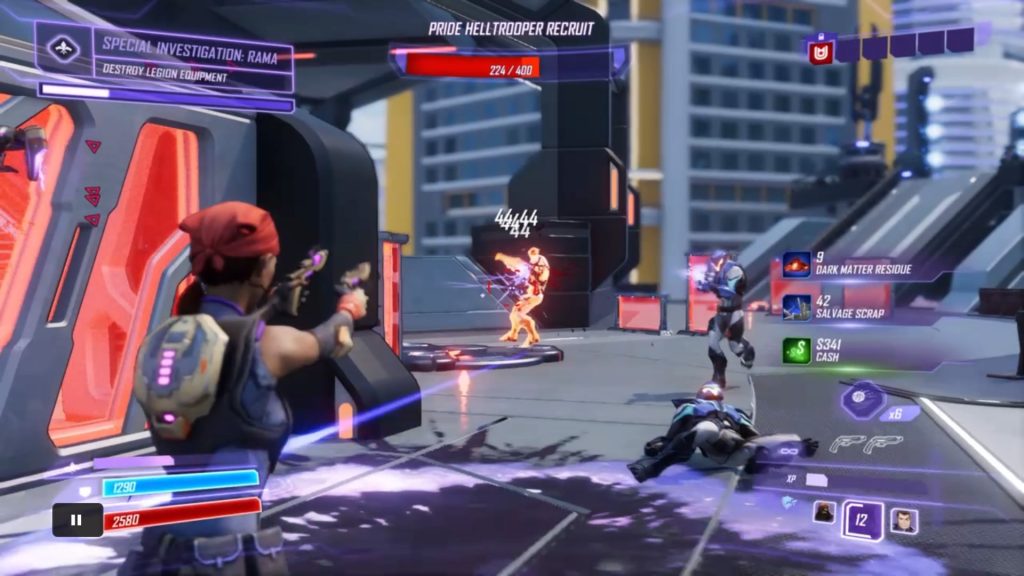 Whilst repetition dampens some of Agents of Mayhem‘s finer aspects, I still walk away enjoying it. I always have something to work towards and new abilities to try as I plundered through each mission. I can’t see this as time wasted, even if some of the writing has caused me to shake my head and the mission design has pushed me closer to boredom. I like this in spite of itself, at times.

Agents of Mayhem
7 Overall
Pros
+ A variety of viable, interesting characters to fight as.
+ Combat feels rewarding.
+ There is always something to work towards.
+ A nice looking world to wander around.
Cons
- The severity of the writing will put some people off.
- Combat can become repetitive.
- Mission design doesn't offer much variety.
Summary
At times it will bore and reduce you to groans but Agents of Mayhem's loot-driven loop will keep some players compelled. There is a better game under the surface of this and you're always being pushed towards some new gadgets, weaponry or skills. Combat delivers an enjoyable, if repetitive treadmill with plenty of room for experimentation. It's a shame it comes with so many caveats and qualifiers.