Solo: Islands of the Heart is described by the developer as a puzzle game that explores the theme of love. This intrigued me, but what does it actually mean? The visuals are cutesy and yet it it rated 12 due to sexual content. Having now played through it twice let me enlighten you. 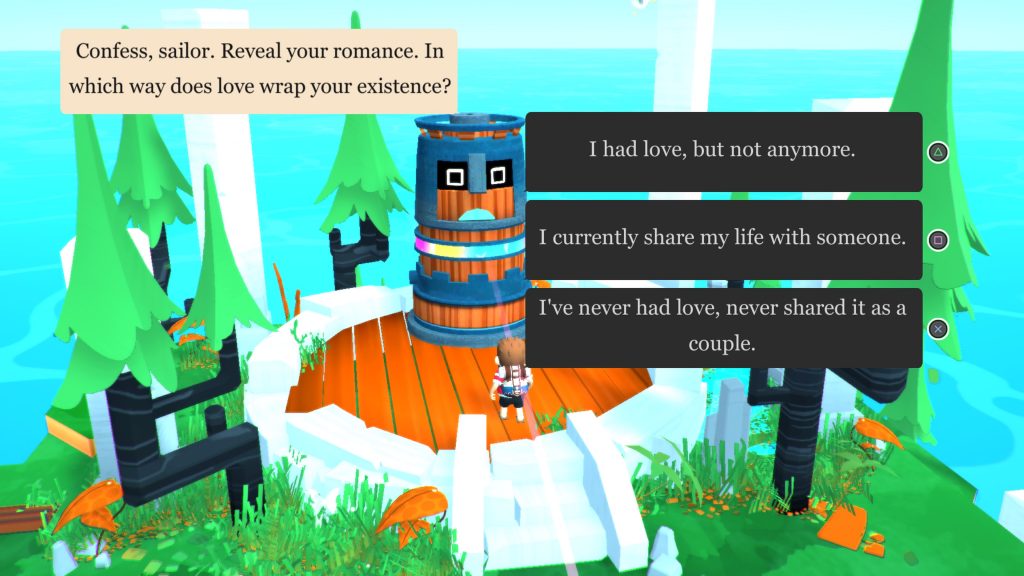 After some brief words about love the game starts. Your chosen avatar is sat on the porch of their house, you can move around the island but all there is to really do is get on a boat and sail to the next island. Here you see a little lighthouse pulsing. Interacting with it shoots a beam to a large totem on top of a hill. This is your main goal throughout the game, interact with a small lighthouse that will activate the totem. Getting there is the challenge.

The first one is easy enough to reach, you simply have to climb some stairs. Along the way you’ll encounter genie like entities that will talk cryptically about love, but add nothing else. Getting to and interacting with the totem brings up a multiple choice question for you to answer. They’re always to do with love, the first asking if you’ve ever been in love, the three answers being ‘I had love but not any more’, ‘I currently share my life with someone’ or ‘I’ve never had love, never shared it as a couple’. 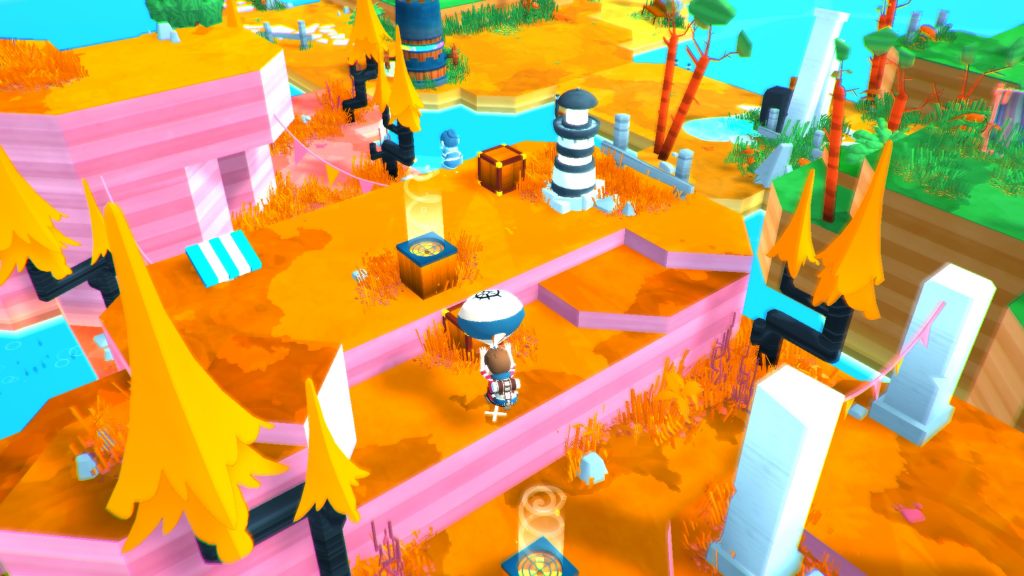 You then get to move onto another section of the island after a brief interaction with a ghost that represents your love/lost love/potential love and the game proper starts as there are a couple of boxes for you to move in order to climb onto to reach higher areas (there is no jumping). Climb up, activate the lighthouse and then interact with the totem for another question, this time about open relationships.

This is the structure of the entire game, though you quickly gain a magic wand which lets you interact with blocks from a distance. This allows for more complex puzzle solving but moving blocks around in 3D space is quite clumsy. It’s not helped by the camera, though you do get a feel a for it as the game goes on. As you progress new blocks with their own properties appear like fans, bridges and sticky blocks which also allows for more puzzle variance.

There seems to be multiple ways to complete each puzzle which is welcome and although they start off pretty simple there are quite a few head scratchers later on. On top of the puzzles needed to progress you’ll also see optional ones where you have to help an animal across a gap to their mate. There are often animals walking around that you can interact with and feed, they don’t have any effect on the gameplay but do grant trophies. Similarly there are songs you can play on your guitar which do little but change the environment (colour, weather) and you have a camera which is pointless beyond a couple of side quests which again only reward you with trophies, no in game reason. 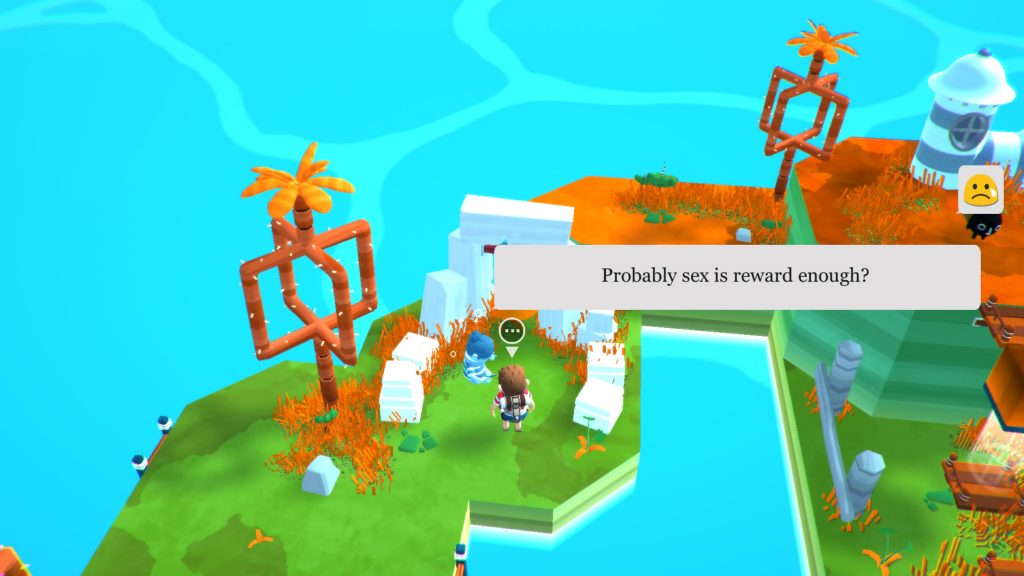 Which sums up Solo: Islands of the Heart pretty well. There are all these separate pieces and they never really gel together. There’s the block puzzles which are quite fun if you’re into that sort of thing, though impacted negatively by the controls. There’s the love questions which is an interesting concept but doesn’t change the gameplay in any way, you just get a ghost commenting (usually negatively) on what you chose and some letters you find will change in tone. Then there are the animals which you can feed but for no purpose other than trophies. Same with the animals you help get together. Same for the songs.

There’s lots of ideas thrown together and they rarely, if ever, interact with each other. You could get a similar effect from completing a level in a Mario game, pausing it and then answering a question on an online questionnaire for all the difference it makes to the game. I’ve played through it twice, making different choices and the puzzles are the same and the questions, although worded differently, are the same. There are two endings but you just choose at the end, everything you’ve chosen up to that point doesn’t matter, it just gets read back to you.

It’s an interesting idea and maybe just getting you to think about love and how you approach it was the whole point, but dressing it up in a decent block puzzler never feels coherent. The visuals are bright and colourful if not that inspiring and I’m sure the music changed throughout the game but it’s pretty forgettable so I didn’t notice. Add to that a couple of glitches which required me to shut down the game and reload (sometimes having to repeat large sections of the game, other times less so) and you have a game that doesn’t reach its potential. 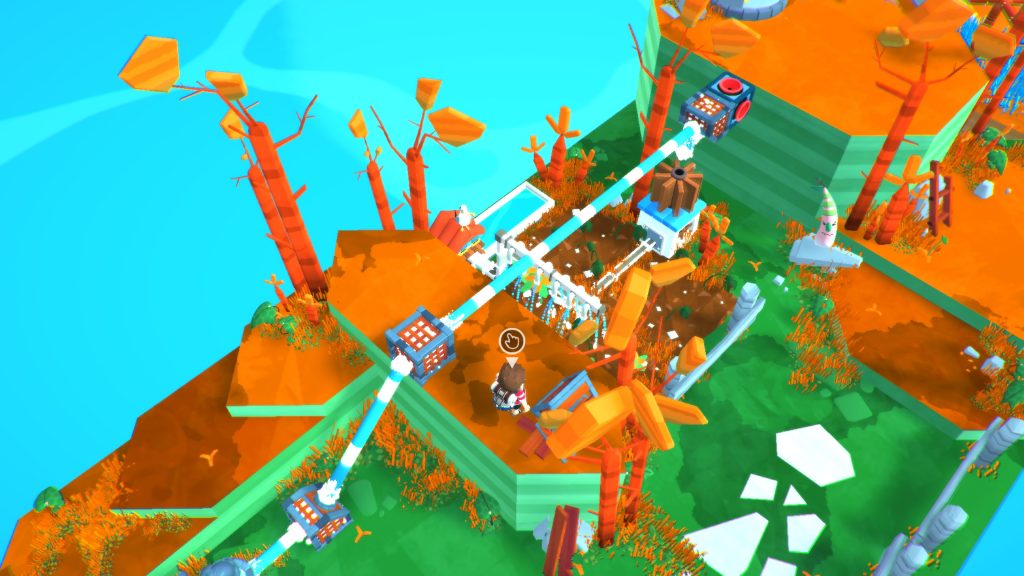 Solo: Islands of the Heart is an interesting idea, exploring the players experiences and perception of love but all the parts feel disjointed. Perhaps if you’re currently feeling strong emotions either way (love or heartbreak) then you’ll get more from this than I did, but if I’m constantly being asked personal questions then I expect that to manifest in the game or gameplay or for there to be a pay off. Here, after four or so hours I got a simple ending, then reloaded my checkpoint and chose a different, simple ending. If you know what you’re doing you can probably complete it in half that and if you like logic puzzles then you’ll get some enjoyment out of it, but it promised more and fails to deliver. Much like love, in that respect.

Solo: Islands of the Heart
5 Overall
Pros
+ Some enjoyable block puzzles
+ An interesting concept
Cons
- Controls are fussy
- Poor camera
- There is no pay off from the love questions
- Can glitch out
Summary
Solo: Islands of the Heart tries to intertwine block puzzles with an introspective look at love. In reality it is a puzzle game which asks you questions about love but never combines the two effectively. This stops them, and the other optional portions of the game, from feeling cohesive.

One thought on “Solo: Islands of the Heart – PS4 Review”