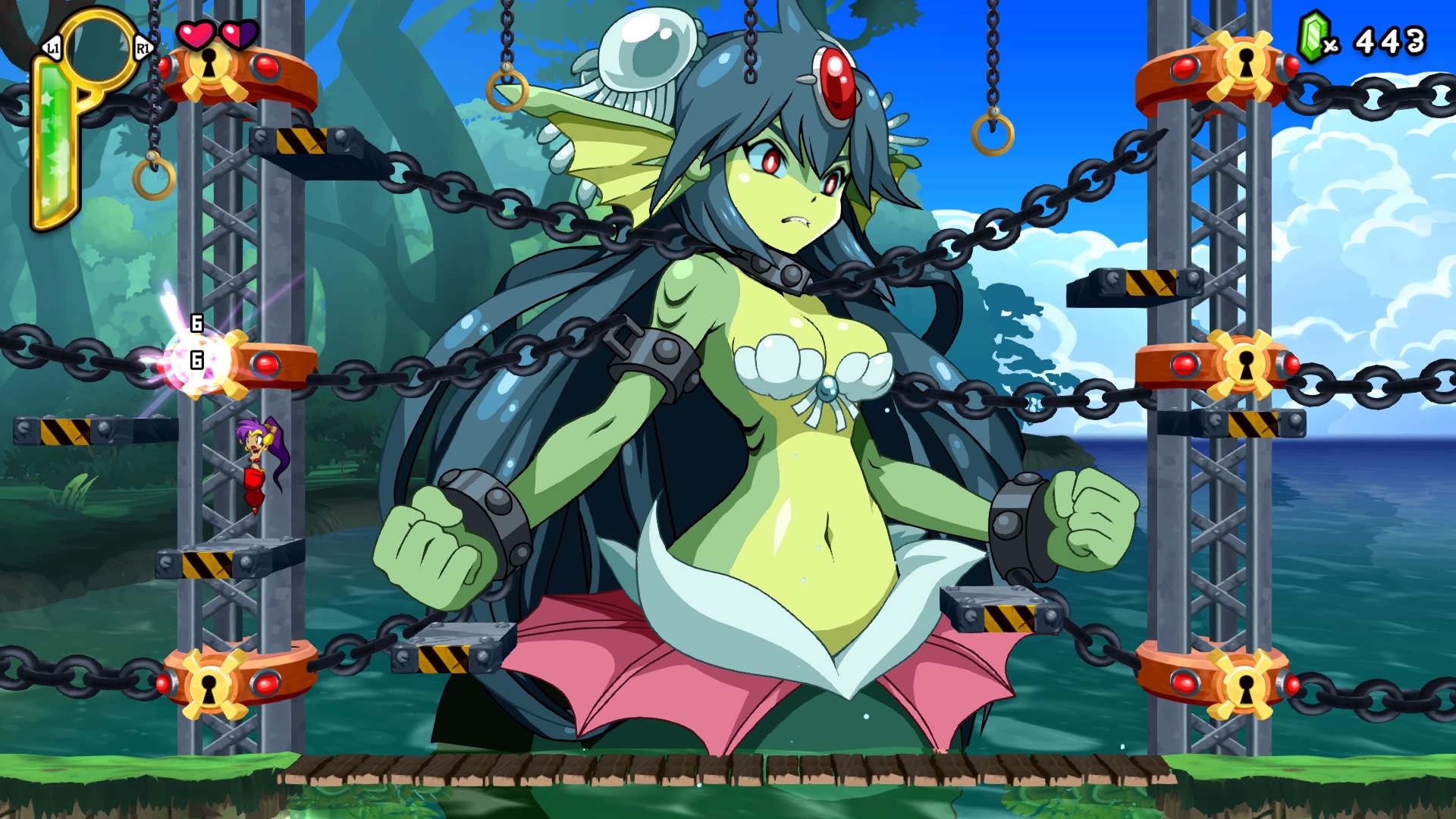 Shantae: Half-Genie Hero is the fourth title in the Shantae franchise from WayForward Technologies. This one was crowd funded on Kickstarter which doesn’t always result in a great game but WayForward know what they’re doing. Right? 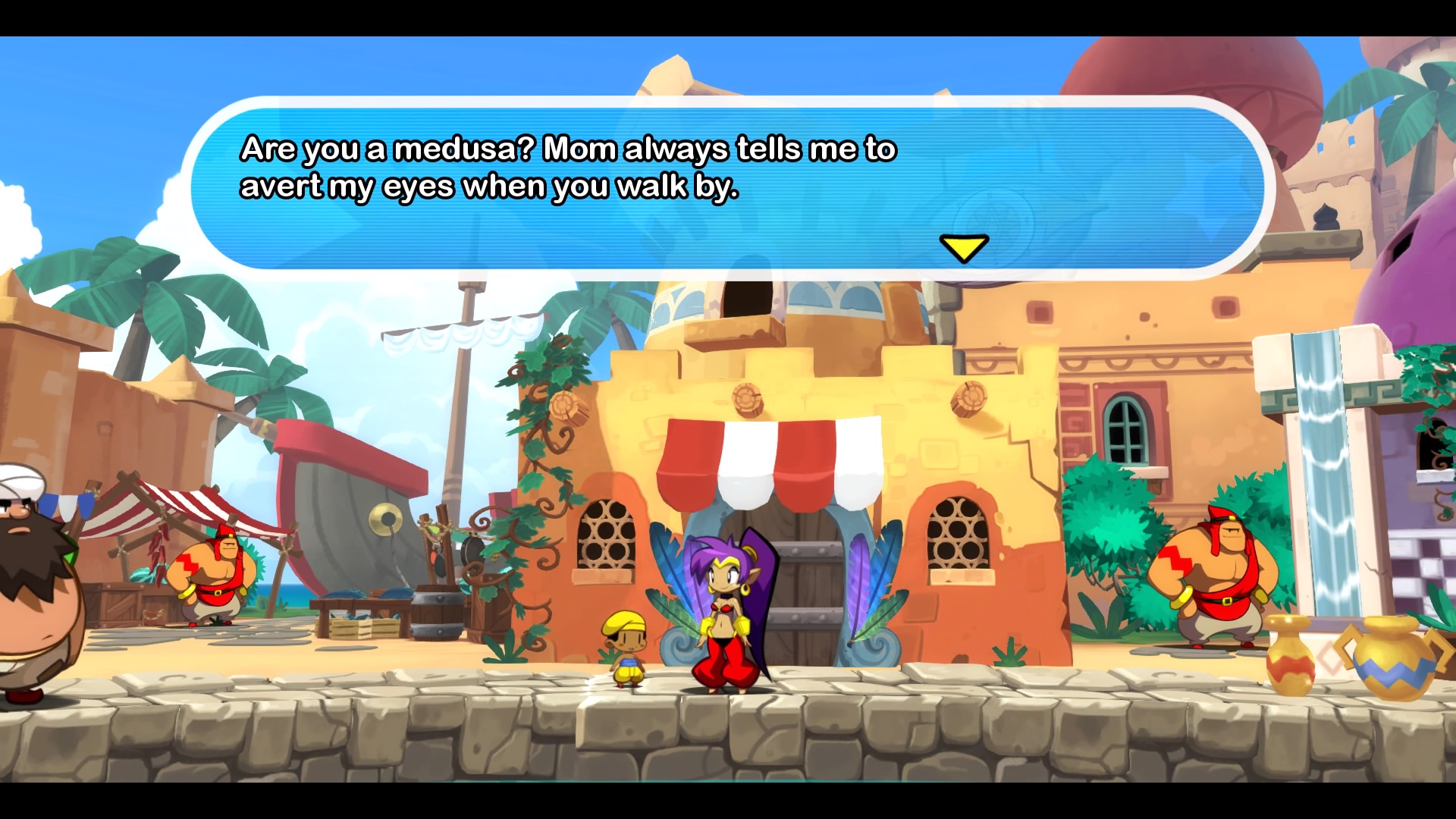 Now I must confess that this is my first Shantae title. I dabbled very briefly with one on the iPad but beyond that my experience has been limited to what I have read, so I can’t comment directly on comparisons to other entries. However, this works really well as a jumping-off point to the series.

You play as Shantae, a half-genie, half-human girl who protects Scuttle Town as its guardian. The evil pirate Risky Boots steals Shantae’s Uncle’s blueprint for a machine that can create large amounts of energy but Shantae quickly takes it back. The majority of the game is then spent collecting the required components for Shantae’s Uncle to build his machine.

You do this by travelling to a range of levels from a desert to a factory, which you can revisit as you gain new powers. Although the levels are each selected from a map, rather than an open world, this is a Metroidvania game where you will need to return to areas you’ve already beaten with new abilities to beat the game. Of course there are lots of optional secrets as well. 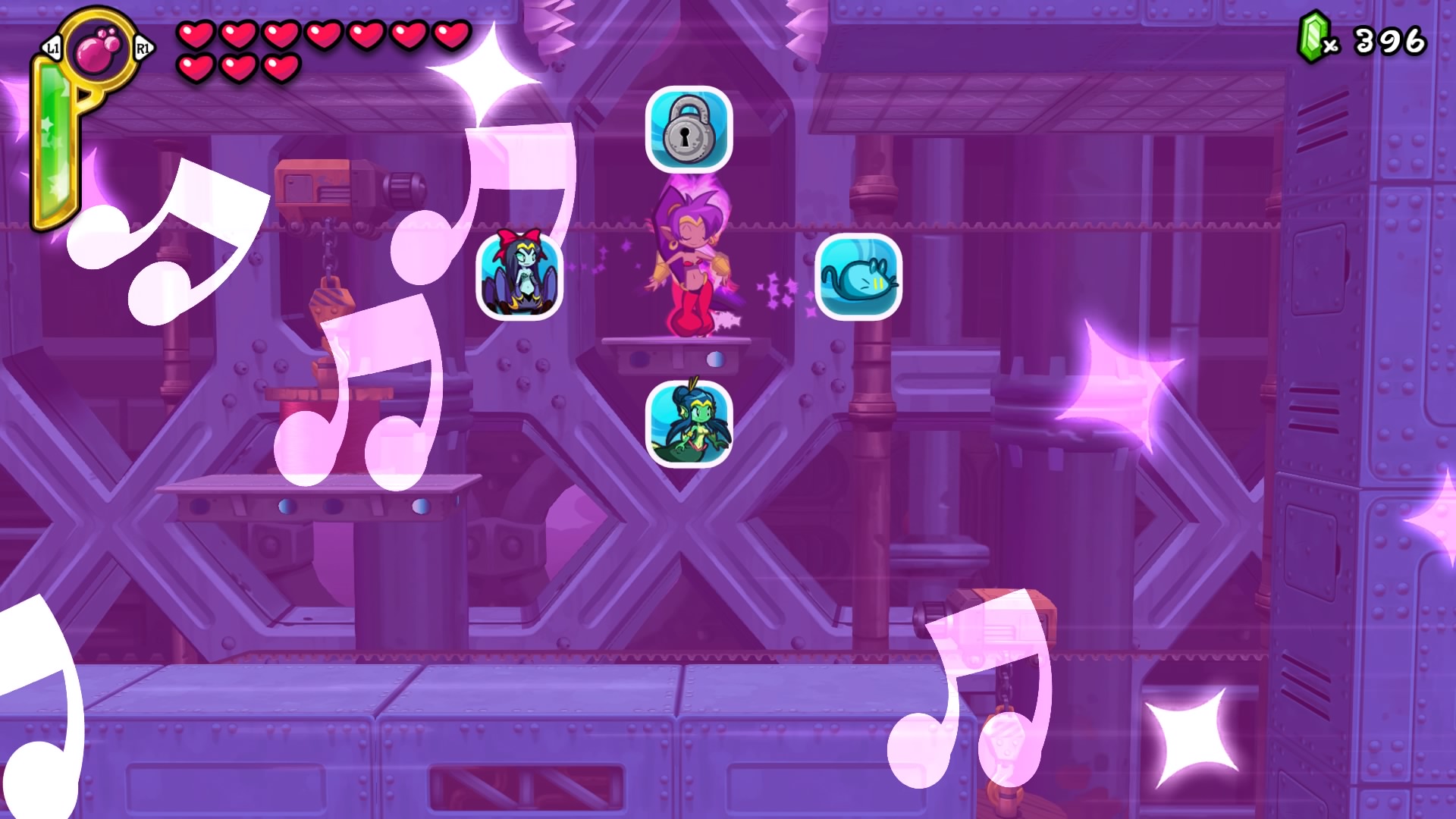 Levels mostly consist of some basic platforming with enemies dotted around to impede you. Getting to the more secret areas can take a bit of skill but generally things aren’t too taxing. Bosses are your typical platformer affair as they repeat patterns until they die.

Shantae’s abilities come in the form of dances. These dances generally transform her into a different animal which will allow her to climb walls (monkey), fly (bat), swim (mermaid) or something else just as useful. These animal forms can be upgraded as well to become more powerful.

Shantae herself can be upgraded by purchasing items from shops using gems you find in levels which will increase her attack power, attack speed and the amount of damage she takes. Spells can also be purchased which will allow you to attack from distance or shield yourself. There is a lot to unlock as well as keys hidden in levels which unlock concept and fan art. 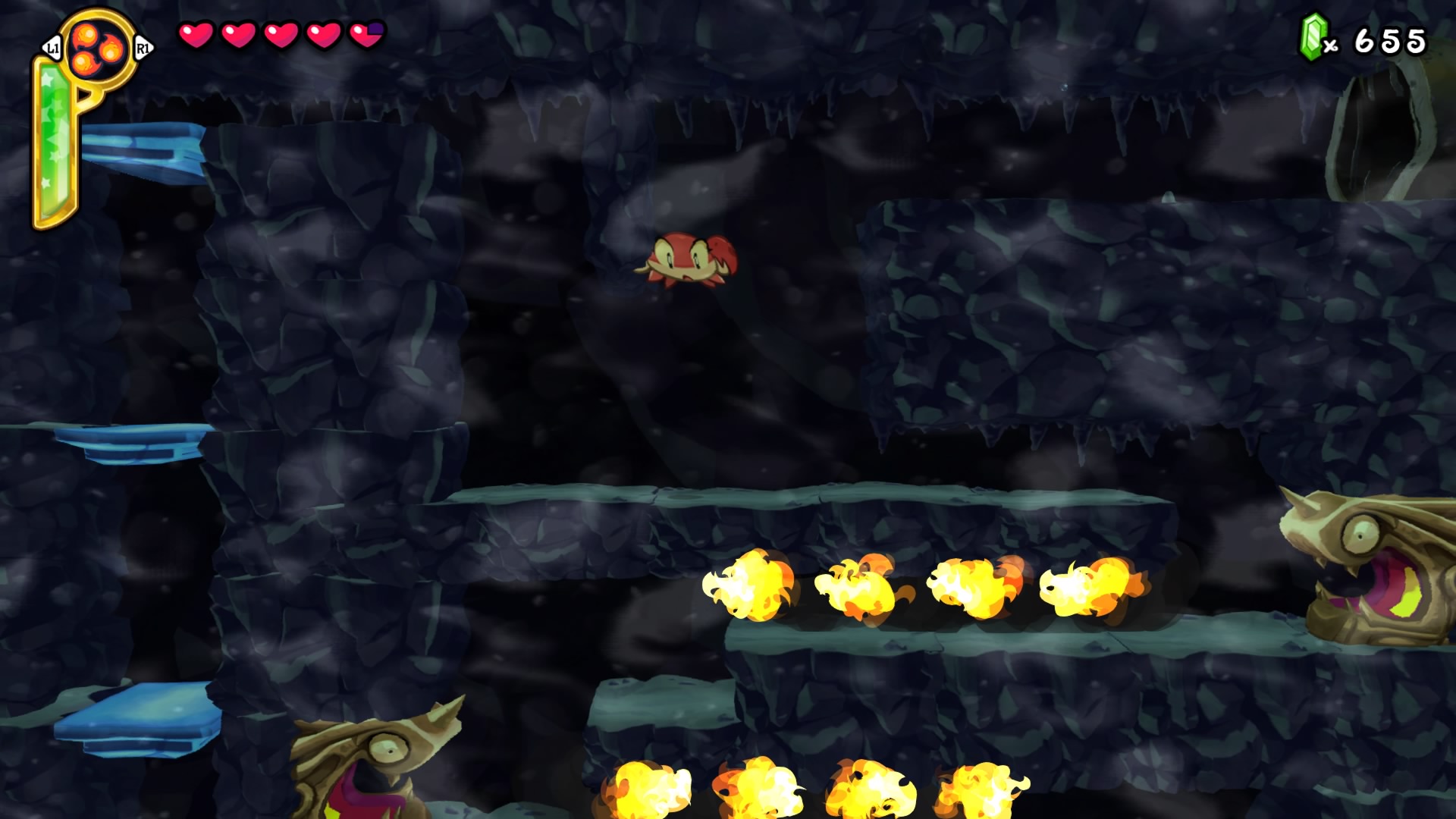 Presentation-wise the game is top notch. The environments are 3D and although they’re not pushing the PS4 to its limits they blend well with the 2D sprites of the characters. These sprites are very well drawn and animated as you’d expect from WayForward and add a lot of charm to the game. The music is also excellent and very reminiscent of platformers of the past, without resorting to chip tunes.

There is a decent amount of writing in the game too as you progress the story and talk to people to accept and turn in quests. Pretty much every line is played for laughs and although not all the jokes hit it suits the attitude of the entire game very well and did raise a smile from me on more than one occasion.

All in all Shantae: Half-Genie Hero is a triumph. My only real gripe is that it’s a little short and overly easy. I suppose if you wanted to make things harder to could disable some of your upgrades but playing it through, unlocking everything took under seven hours (and that was with a lot of fruitless searching for secrets, there is a trophy for speed running the game that can be done in less than two and half hours) and I didn’t die once. Fell down a pit a few times but that just puts you back at the nearest checkpoint rather than giving you a game over. 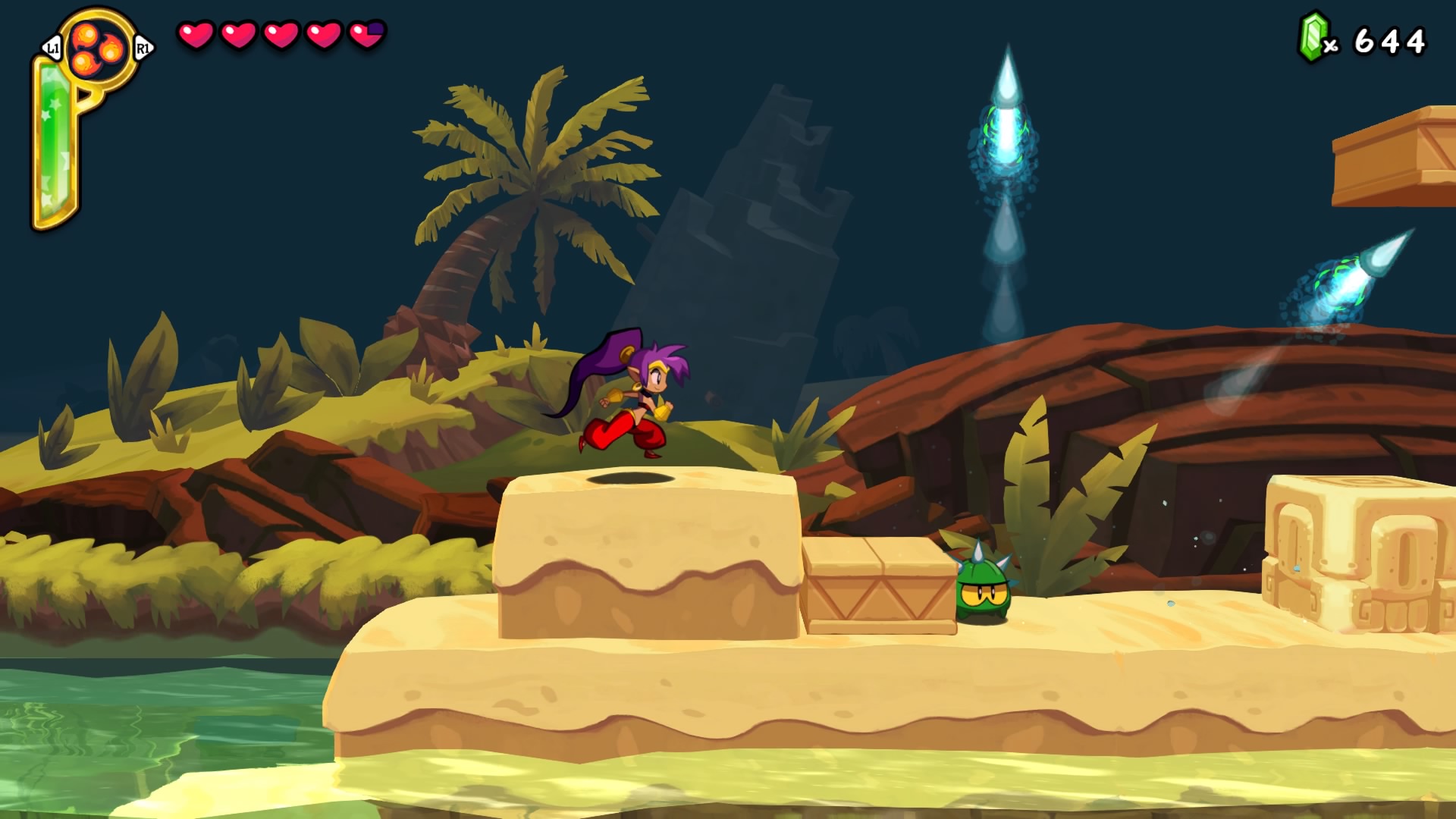 The game plays well, the upgrades come thick and fast thanks to the short running time and the upgrades do feel like actual rewards as by the end of the game you can become literally invincible if you choose. The bright and carefree atmosphere make it a joy to discover new areas whilst the visuals and audio are a pleasure for both your eyes and ears. I’d have liked a little more challenge personally but as a gentle romp, exploring areas and finding secrets, you’d struggle to find a better example on the PS4.

Shantae: Half-Genie Hero
8 Overall
Pros
+ Great visuals and audio
+ Lots of upgrades to unlock
+ The whole package is charming
Cons
- Difficulty is pitched a little low
- Not very long
Summary
Shantae: Half-Genie Hero is a great Metroidvania style game. A little easy and on the short side but that just means it leaves you wanting more. Unlocking the upgrades and using those abilities to discover new areas is incredibly enjoyable and is only heightened by the high quality and charming presentation.