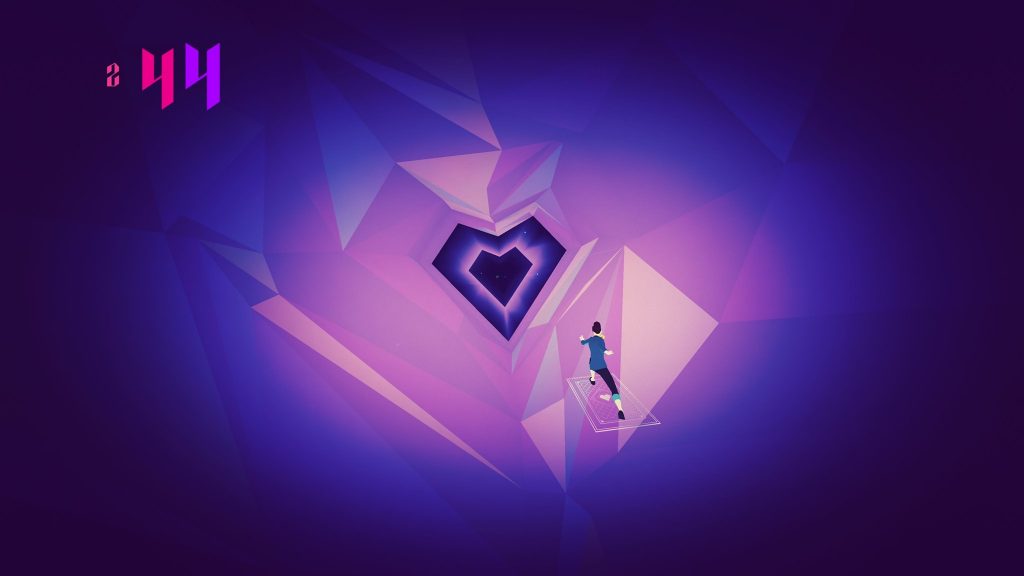 In any other review, this is the part where I would list off a few examples of similar games within the genre of the titled game. I would also normally discuss why this new game would be different, similar, comparable or not to the previous examples given. In the case of Sayonara Wild Hearts, I draw a complete blank. Sure, there are other games that developer Simogo have clearly drawn from as evidenced throughout the campaign, but the combination of ideas, the soundtrack and visual style all contribute to something that feels truly completely new. Sayonara Wild Hearts is utterly unique and here’s why you should stop looking at the screenshots, YouTube videos or whatever you are doing and consider playing this thing.

It all starts with an unnamed girl. This hapless soul has encountered a bout of heartbreak, It is not known what the problem is, however, there is very little explanation required for this game. After being visited by three Arcana from another dimension, our heroine is dropped into the other world. Taking on the Wild Fool Arcana, she must solve the problems of the other world by taking on various gangs in a hyper-kinetic ballet at ludicrous speed, involving materialised motorcycles, roadsters, tarot card surfing and even a Stag. 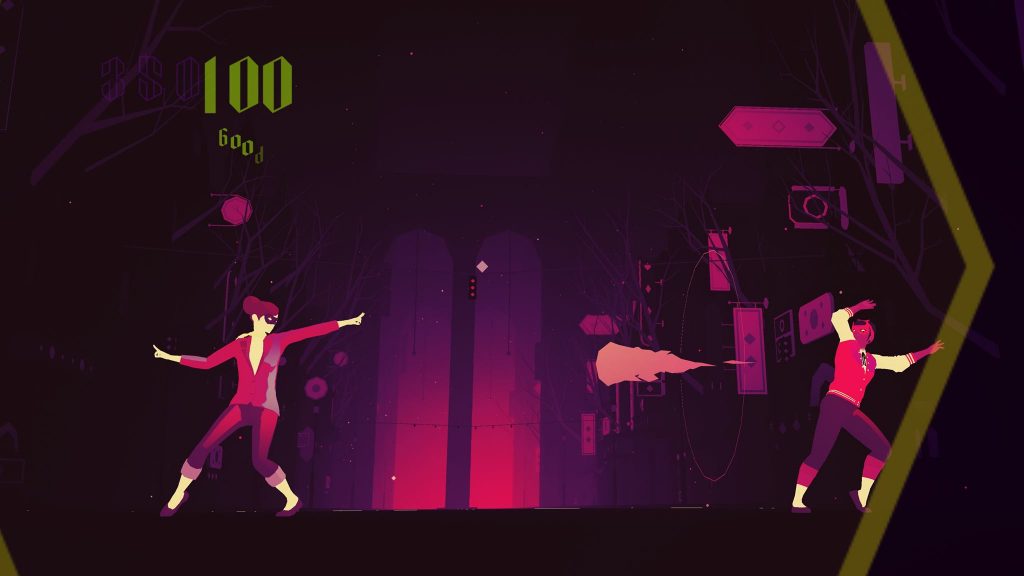 Sayonara Wild Hearts isn’t presented as a typical game, it’s more of a visualisation accompanying a high concept pop-album. Imagine if Daft Punk’s Interstella 55555 was playable and you would get a rough idea. The world’s visuals and motion are dictated by the audio playing in the background, forcing the ebb and flow of movement, to the mechanics of each stage. A good example of this comes in early in the game, where you must leap from platform to platform utilising simple rhythm action, or one even later that sees elements of the world flipping back and forth into place, with a keen ear being more important than the visual cues on screen to help you progress.

With everything going on in the background and at the speed of which the game takes place, this would seem ultimately chaotic if you were given a lot of buttons to press as well. Sayonara Wild Hearts has this covered with an incredibly simplistic control setup that consists only of the left stick and a single face button of your choosing. This input consists mainly of moving left or right and pressing an action button contextually with the music when required to. Now, some may desire for a game like Sayonara to have a more complex control setup, one that would require skill and dexterity for the sake of bragging rights and challenge. But, for this type of game, where the action is lead by the experience, I did not find this affecting my enjoyment of the title at all. Instead, it let me focus on the getting through each level at the speed and grace that is intended, having to restart constantly due to failed inputs would have marred that. This does come with the caveat of being a game you could complete in less than two hours due to the lack of stakes, but it ultimately fits the theme and pace of the title. 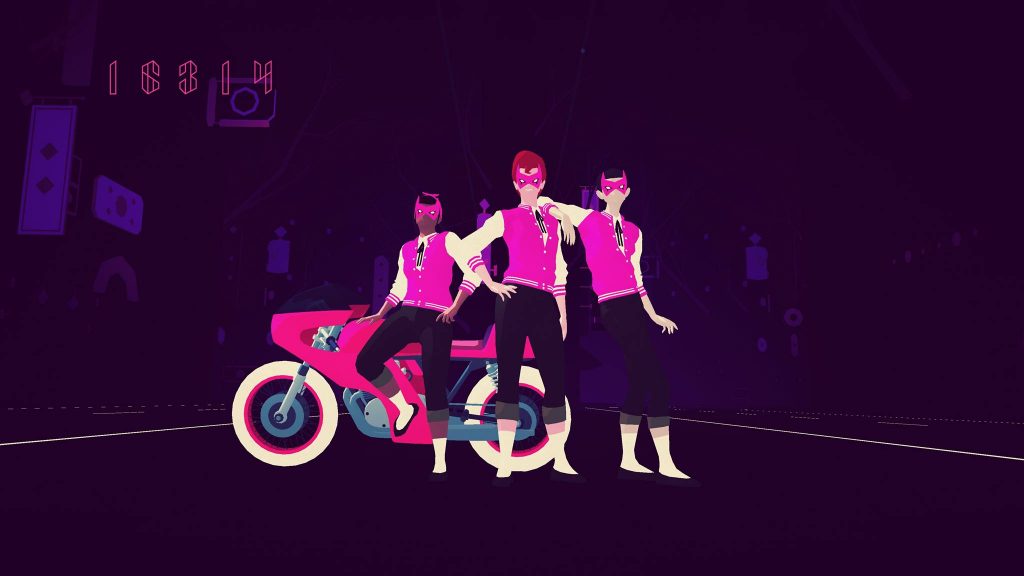 That’s not to say that you won’t be doing much in the game. Sayonara is filled with different styles of gameplay and it is impressive to witness some of the antics at display here. While the majority of the game sees you chasing foes into the screen, either on the back of a motorcycle or skateboard. The action often gets broken up into side-on perspectives depicting fights between the Wild Hearts. Other gameplay styles show up, such as a driving stage where you take to retrowave style streets before being flung into a pseudo VR, arcade like title from the Atari days or even a Rez like shooter where you need to select a group of enemies before unleashing a volley of projectiles to take them down. It may seem like a mixed bag, but where Sayonara differs from other titles that take a similar approach, is how it is all executed. None of these elements are explained, they all feel completely natural and the way in which the styles transition is downright masterful. There were few if no moments in which the gameplay style changed an i felt helpless or failed cheaply. Instead, Simogo has made everything seamless, an effort that should not be understated.

That may be a disappointment to some, far more for those if the visuals and soundtrack didn’t make up for it. Gladly, I can say in the latter departments that Sayonara Wild Hearts is an absolute treat. The audio is presented as a full-length album, consisting of various pop styles, mixed with flashes of classical music, synth-wave and even a few dubstep elements here and there. The mix of songs and the way in which they connect to each other thematically suits the game and visuals perfectly, making for some epic and well-sung audio splendour. From the opening moments of Claire de Lune, to the closing track ‘Wild Hearts Never Die’ the audio feels like a journey taken by rollercoaster, clearly defining a beginning and end with plenty of ambience and crescendo’s in-between. The only issue with this being the breaks in gameplay, a matter resolved by an unlocked album mode which segues all the songs and levels together for a seamless experience. 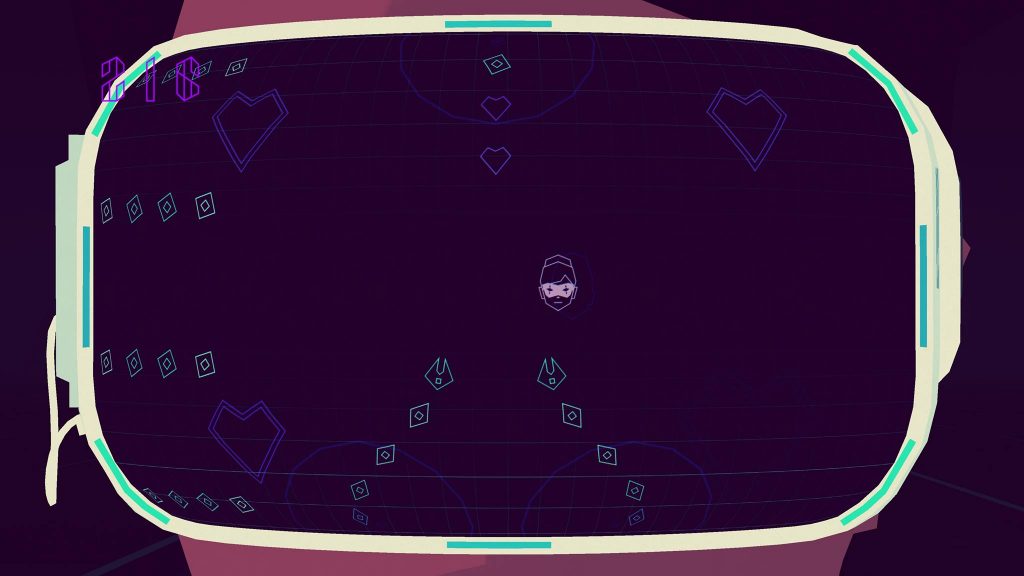 Visually, Sayonara is nothing short of stunning. The game utilises an overall minimalistic pallet of bright colours with no outlines to speak of to work its visual magic. Despite the blinding frame rate, there are very few times in which it becomes impossible to recognise what cues to look out for in each level, which items to pick up or style rewarding ramps to fly over. All of this mixes in with a stained-glass aesthetic that fits in with the overarching tarot theme. The various characterisations of the Wild Heart gangs are beautifully represented with a balletic grace that feeds in with the seamless animation style. The unsung hero of the adventure comes in the form of the camera that shoots the action; it is by far the most dynamic one I have seen in a game to date. The way it swoops into different viewpoints without muddying the gameplay style is a sheer masterstroke of development and contributes immensely to the overall speed and feel of the title.

With all the above considered, Sayonara Wild Hearts is nothing short of a visual and audio masterpiece. Some of its parts will be bemoaned by some people of course, the gameplay being simplistic, and the game length can be a sticking point. But for me, Simogo have achieved more than they have set out to do with Sayonara. They have created a visually arresting, synesthetic journey that deserves attention. One that should not be spoiled by watching the gameplay or reading too much before playing as this deserves to be experienced first-hand.

Sayonara Wild Hearts
9 Overall
Pros
+ Visually Stunning
+ I have never hit the ‘Next level’ button as quickly as I have with Sayonara
+ The very definition of all killer, no filler
+ Excellent Soundtrack
Cons
- Album mode is an unlock, should be default!
- A bit too simple to play, no stakes or real challenge
Summary
From the hyperkinetic pop soundtrack to the breakneck gameplay speed, Sayonara Wild Hearts is one hell of a rollercoaster ride. The undeniable visual flare, immense style and uncompromising frame rate hides a clear message underneath it all that many can relate to. Wild Hearts never die and Sayonara Wild Hearts should stand for years to come as a shining example of how to bring music alive into the gaming medium. It’s nothing short of fantastic.