Reflection of Mine is a puzzle game from those proprietors of easy platinums Ratalaika Games and one that continues the prolific publisher’s pattern of putting out incredibly varied titles.  This stylish puzzler uses a similar idea to games like Brothers in that you control two characters at the same time as you help them both navigate a series of troublesome stages and, unlike much of Ratalaika’s output, it’s a very taxing challenge indeed.

You play as Lilly Witchgan, a very troubled lady who is fighting a losing battle for control of her own body thanks to having a heap of other personalities vying for their chance to surface.  This is a very dark tale indeed and one that has more prominence than you’d usual expect to see from a storyline in a puzzle game. 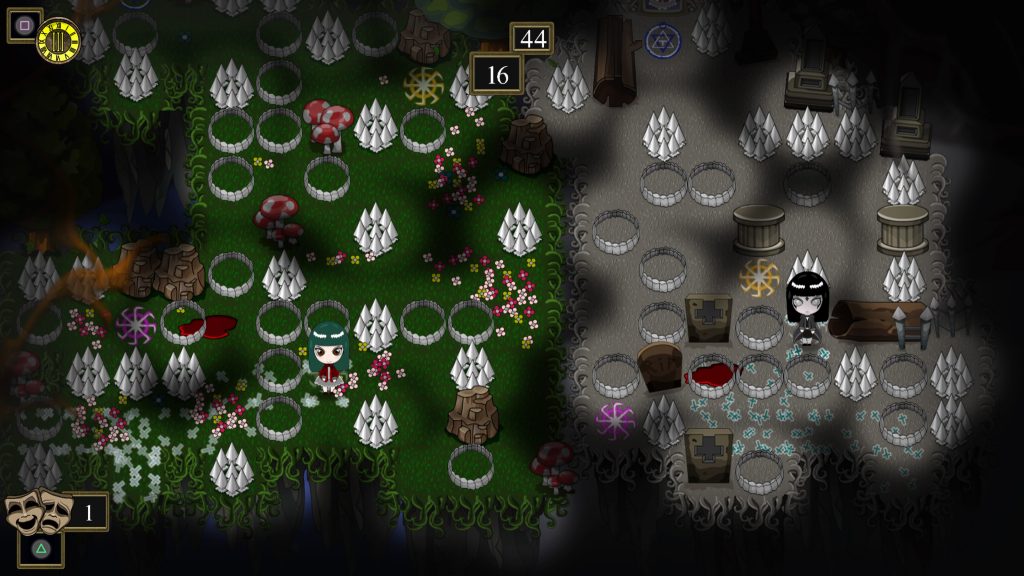 The core game is, as we said, a puzzler pure and simple.  On one side of the screen is Lilly and on the other is one of her many alter-egos.  As you move her, you move the other at the same time.  The puzzling comes from the simple idea that if you press in a direction and that way is blocked for one character but not the other, then very quickly the two characters will be in different points on the level.  Add to that a whole raft of additional mechanics and you have a recipe for some very difficult puzzling indeed.

Initially, the solutions are reasonably apparent but that doesn’t remain the case for long.  Aside from just getting each character to their target, you’ll soon have more to worry about.  Spikes and other stationary traps soon appear on either side of the map, if one girl fails then they both do.  This makes things trickier but for a while it’s all good.  However, it gets much, much harder. 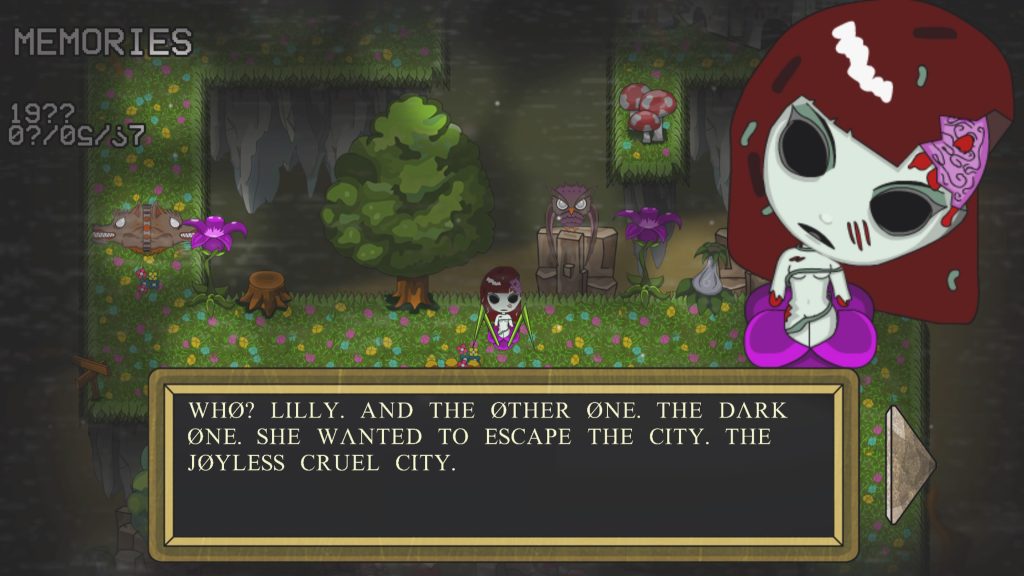 Traps that alternate from one side of the screen to another end up increasing the difficulty exponentially but then they add other elements too.  Teleporters add even more complexity, moving enemies even more so as well as moments where you need to throw things.  Before long you’re looking at stages that take over a hundred moves to beat and that’s if you’re doing it well.  It gets even worse when your other half ends up moving in the opposite direction to Lilly.

For me personally, that’s where it stopped being fun.  I was reminded of Hitman: Go which was initially a fun little puzzler but soon required so much memorisation, as well as trial and error, that my brain really wasn’t able to process it in a way that was enjoyable.  That did become the case here.  It’s the difference between solving a Rubik’s Cube and solving one blindfolded. 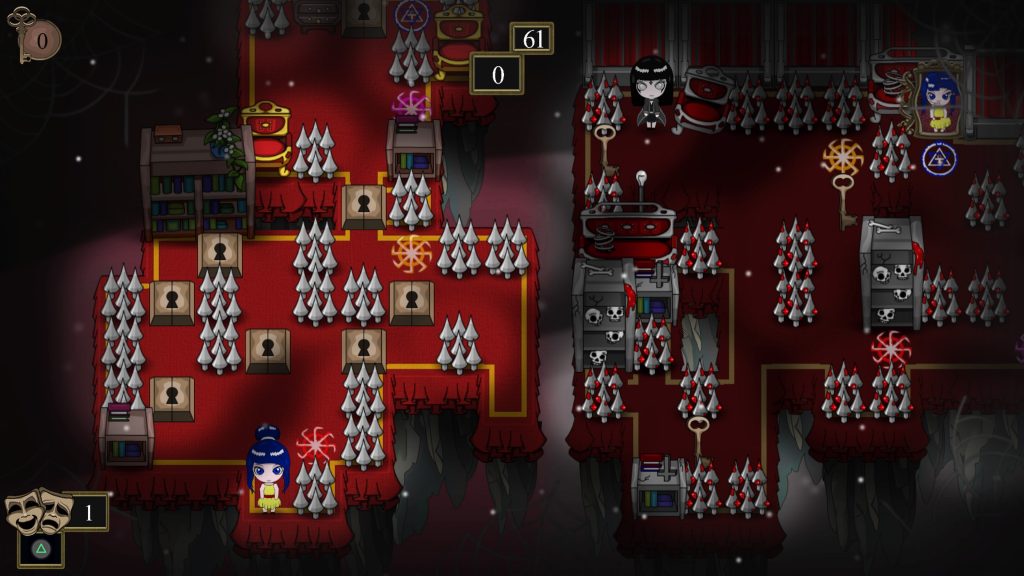 However, plenty of people loved Hitman: Go and many of them will love Reflection of Mine but this isn’t for everyone.  If you’re confident in your own ability to solve logic problems then crack on but if you’re not as smart as you think, you may struggle.  The game does, on Easy and Medium at least, offer help by showing you a less optimal solution but these don’t take into account some of the moving obstacles so not all the levels are a total gimme even with this.

Being a Ratalaika game, you don’t have to beat the whole thing to get the platinum but you will need to beat three quarters of it and there’s plenty in that portion of the game that will cause trophy whores plenty of frustration. 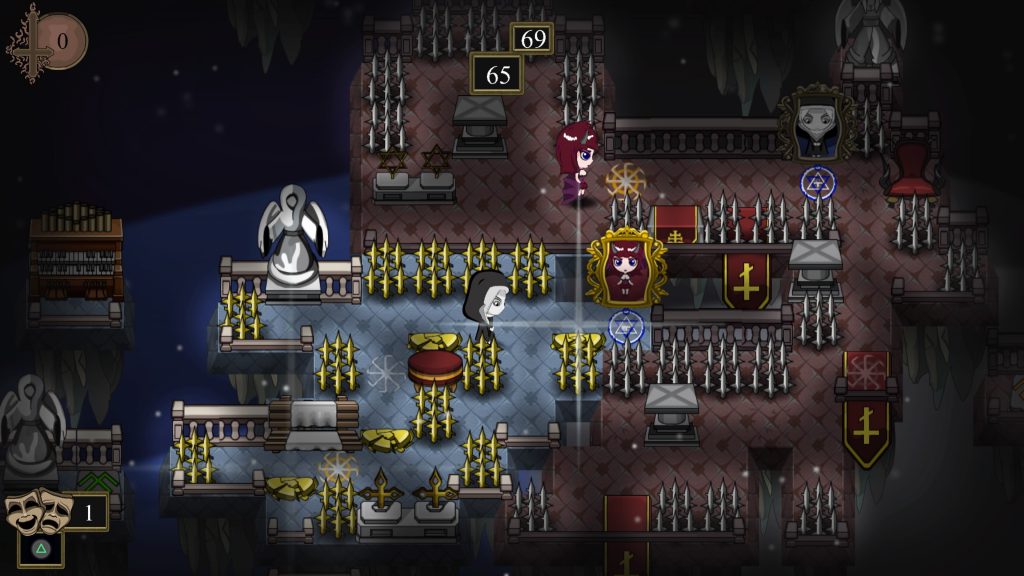 Along the way the story does keep going and while we appreciated the way it was told, and the surprising darkness of it, it did start to get a bit hard to keep track of due to all of Lilly’s personalities and how they interact.  Eventually we stopped caring but, again, your mileage may vary and we were happy that the story was there anyway.

The game’s presentation is a real highlight.  The art has a dark, anime style which is detailed and clear.  This aids both the story sections and the puzzles themselves.  It is accompanied by some fantastic music too which really sets the mood and elevates Reflection of Mine.  Just because a game is a cheap indie, that doesn’t mean we can’t have nice sound and visuals and so we do appreciate the work that’s been put in.

Probably our main issue with the game is that we have to plough through games like this to get them reviewed in a timely fashion, which isn’t really the way to play a game like this.  If you treat it as a very challenging puzzler that you dip in and out of over several weeks, you may find that keeps the frustration at bay a little but be prepared for a significant challenge if you want to get the most out of Reflection of Mine.

Reflection of Mine
7 Overall
Pros
+ A decent puzzling concept
+ Well presented
+ Significantly challenging
Cons
- Level solutions get far too complicated
- Story is hard to keep track of
Summary
Reflection of Mine is a game made with plenty of care and attention and we appreciated just how well presented this original puzzler is. The level solutions can get pretty long-winded though and eventually stopped being fun. But you're smarter than we are, so crack on. Especially if you're a fan of puzzle games.