Skatemasta Tcheco is a follow-up to Tcheco in the Castle of Lucio which was a simple 2D platformer that never made it quite as far as the PS4.  Where that game was a screen by screen platformer, Skatemasta Tcheco is an auto-scroller that sees you playing as the titular Tcheco,  a sort of fat hairy man with a fanged underbite.  There’s no story here so all you need to know is that he has to navigate his way across the game’s eight levels on his skateboard.

As you can imagine, navigating a platforming game on a skateboard that is constantly moving isn’t ideal.  If you’ve ever played the original Wonderboy, you’ll know what I’m talking about.  But anyway, that’s what happens here.  The screen scrolls ever onwards and you have to jump over the various obstacles and enemies so as to preserve your generous stock of lives (you have eight hearts but these each count as two lives).

Along the way you’ll pick up money which has next to no use beyond acting as your score, although you can spend a small portion of it to save your progress between levels (not that you really have any reason to).  You can also find letters that spell out a name.  Collect them all and a friend will help you during that level’s boss encounter.  These are fairly standard boss battles where you’ll need to figure out their patterns.  It can be a bit rough getting smacked down by a boss after navigating a tricky level and they aren’t brilliantly designed but we did like the friend aspect at least. 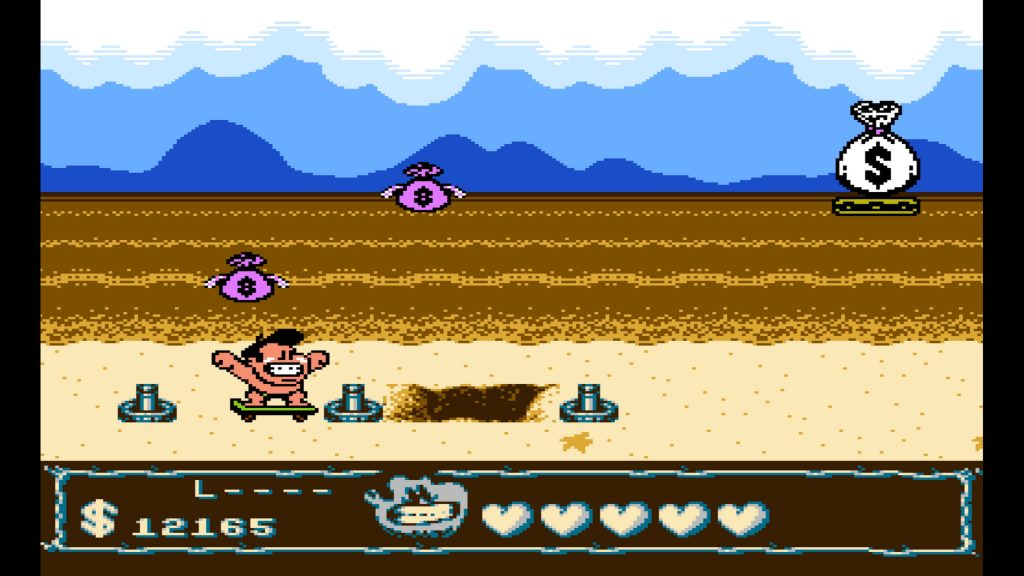 Aside from that, there’s not really much else to the game.  You move left and right with the left stick and jump with the

button which also doubles as your attack.  If you press it during a jump, you’ll dash a fair distance and this can be used to take out enemies or traverse larger gaps.  It’s very twitchy though which means you may find yourself struggling to achieve any kind of precision with it.

Each level has a difficulty rating and you can take these on in any order.  Aside from the backdrops and occasional differences in enemy types, each level plays the same.  You skate forward, jump over things, try to land Mario-style on enemies’ heads and occasionally collect things.  Your large stock of hearts helps although it does paper over one of the issues this game has. 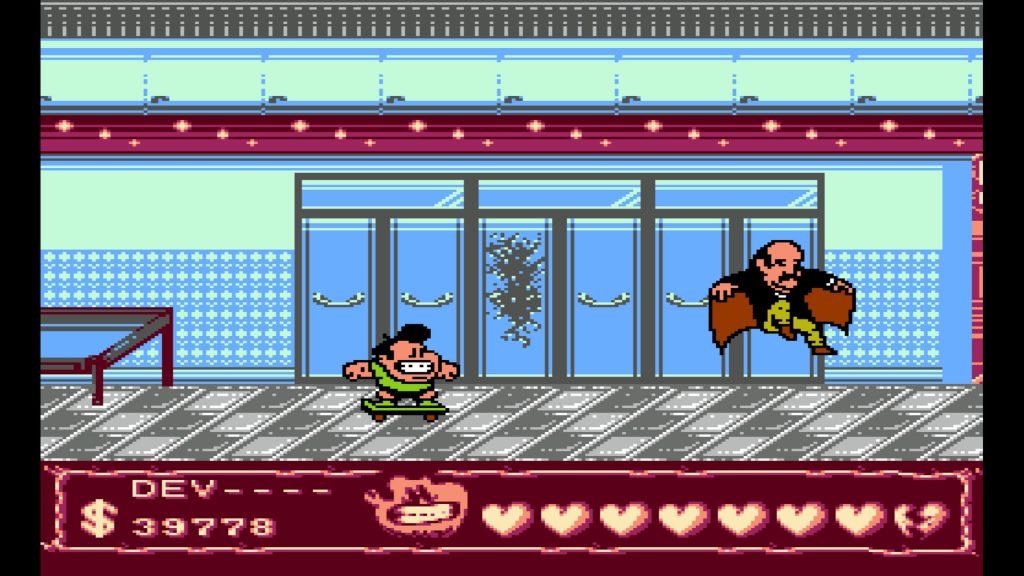 The levels aren’t great.  The placement of gaps and enemies often feels random, as if the levels were procedurally generated by some sort of algorithm.  This is compounded when you are faced with large gaping hole sections where you need to stay on platforms and avoid the ground.  It’s often a bit unfair and not helped by the game’s controls which are simple but also very twitchy.   On the easier stages, you’ll need most of your lives to get through it but on harder stages, reaching the end boss is a real struggle.

It’s just weird.  The level designs are so sloppy that the fact that they are designed seems strange.  The controls are basic and reasonably intuitive but they don’t flow with the levels at all, you feel disjointed from them sometimes especially as the 2D style removes depth but seems to create its own perspective to the degree that we often fell into a hole because we thought it was part of the background.  You often lose multiple lives in a row too just because of how badly put together the stages are.  There’s just this sense that they did just enough with them and then threw in over a dozen lives just to paper over how easy it is to lose them.

On top of that, the skating aspect isn’t explored at all.  It’s just a mechanism to facilitate making this a runner of sorts.  There are no tricks or opportunities to show off some skill, no clever scoring systems.  It’s just a thing that keeps you rolling forward. 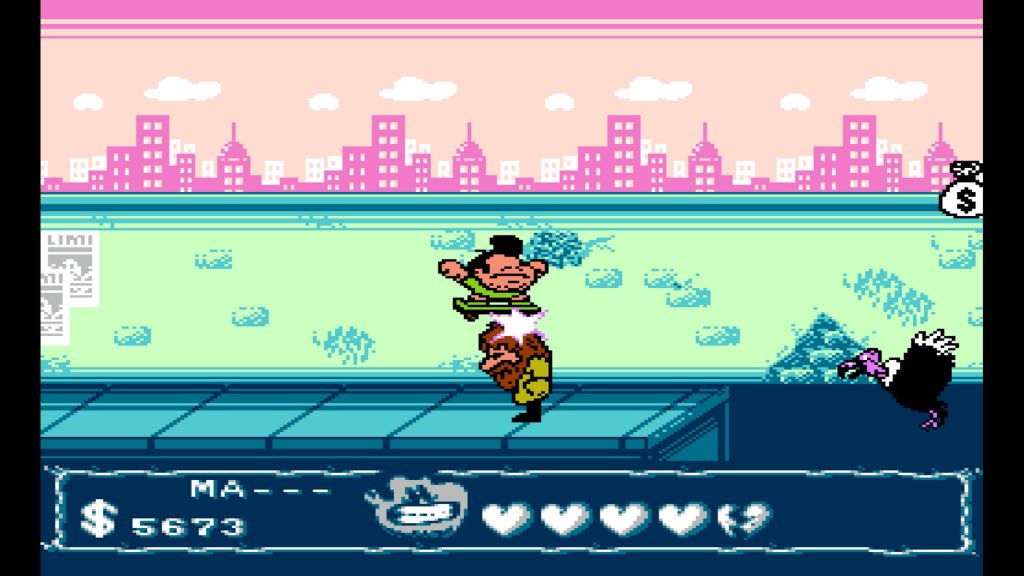 When you then consider the game’s presentation, things do not improve one bit.  The game goes for a rough NES-style visual style which is pretty awful.  We don’t mind old-school visuals around these parts but if you’re going to use an older style, it should at least be good and preferably should be something that would have turned heads 30 years ago.  This visual style reminds of some ropey public domain games on the Amiga.  If it wouldn’t have been impressive 30 years ago, it certainly won’t be now.

There’s just no sense of care to this game.  The levels don’t seem very well considered, the controls aren’t optimised, the presentation is lazy and throwaway.  There is definitely a challenge, although giving you so many lives really just highlights how poorly constructed the levels are, and the simple controls do at least allow you to get into and understand the game immediately but this sort of thing really isn’t good enough for 2020 and at the end of the PS4’s lifespan.

Other sites are being a bit more kind about the game and so we acknowledge that your mileage way well vary but nope, this isn’t for us.  Not at all.

Skatemasta Tcheco
3 Overall
Pros
+ Easy to pick up
+ Has an old school challenge to it
+ Levels are fairly different to each other visually
Cons
- Bad level design
- Awful presentation
- Wouldn't have been good 30 years ago
Summary
Skatemasta Tcheco looks, plays and feels like the sort of game that NES magazines would have given very average scores to back in the '80s, so in 2020 this kind of throwaway nonsense really doesn't make any sense at the end of the PS4's lifespan.