It only feels like five minutes since we were reviewing Snooker Nation Championship which was one of two snooker titles to come out in close succession earlier this year. While it lacked the licensed players and venues, we found it to be more fun than Snooker 19 but we did find quite a lot of snooker nerds disagreed with us which kind of felt like the old PES vs. FIFA debates but back when PES was clearly the better game but FIFA had all the real players.

Well, Cherry Pop Games are back with Pool Nation. Although, to be fair, Snooker Nation might actually be the later game as this one was released on Steam back in 2013 and appears to be much the same game as its PC counterpart. Either way this is, as you’d expect, the pool version of their snooker game.

Certainly they share a lot in common beyond their physics engines. The main menu feels a lot like Snooker Nation‘s, using panels (much like FIFA) to convey the options and offering a mix of gameplay modes, split across on and offline play) and customisation options for things such as ball sets, new table surfaces and so on. 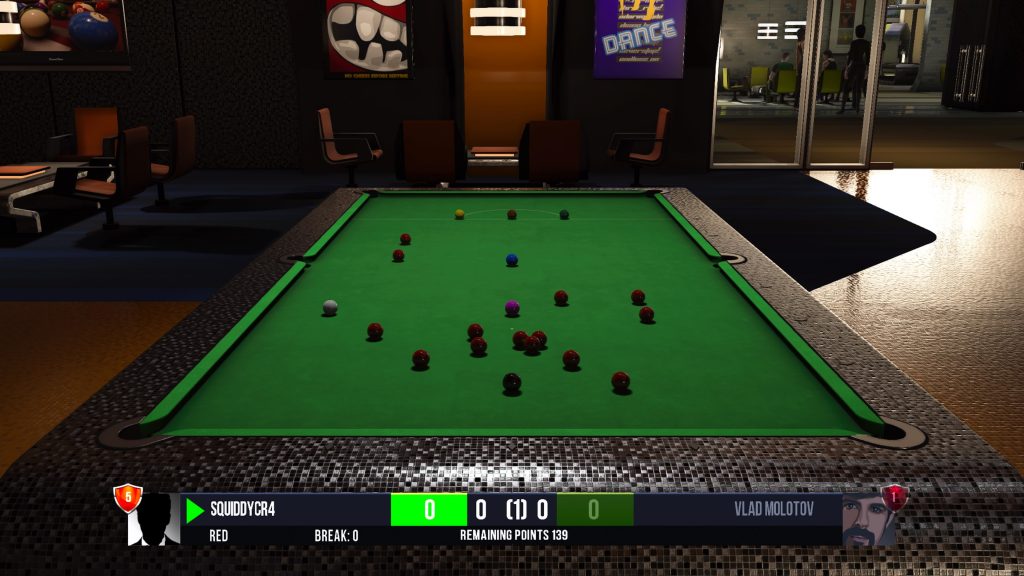 We started with the career mode. Here you are tasked with winning tournaments in various, presumably exotic, locations. It’s a bit of a con because while you are meant to be in places like Hawaii, New York and Japan, the reality is that you are in a pool hall somewhere but even so, this is the career structure and you go to each country and take part in a big pool tournament, meaning that you have to go through qualifying and then all the rounds up to and including the final.

Snooker Nation was similar, albeit with just one tournament. We like that Pool Nation has more tournaments and locations though as obviously the matches are shorter and by default a lot of the early matches are just one frame, which means that you’d absolutely fly through the career mode if they didn’t have more tournaments on offer.

The action on the baize is exactly what you’d expect, especially if you’ve played Snooker Nation or any other pool/snooker game since they went 3D. You control your direction, spin and power just as you’d expect. The game also lets you lock in your power, using

, just like Snooker Nation did and this is a nice feature as it allows you to focus on aiming without having to multitask. 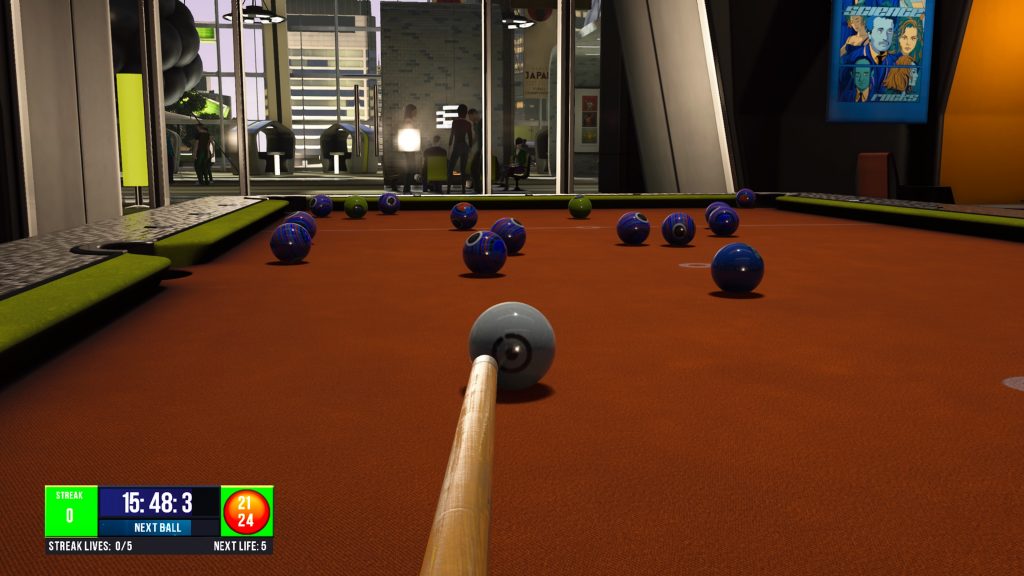 The physics feel spot on with no weirdness noticable from our untrained perspective although it’s a lot easier to send balls flying than it was on Snooker Nation, but not something that you’ll do often, and that’s something that tends to happen in pool games anyway, especially when you blast the balls.

By default the AI is set to ‘absolute idiot’ settings or ‘Easy’ as the game likes to call it and between that and the fairly generous aim assists, you’ll find it nearly impossible to lose frames unless you somehow leave the 8, or 9, ball on for the AI to sneak the frame. Pool is odd like that, you can be absolutely cleaning up and then your opponent can just pot one ball and win. But we found ourselves dominating.

To counter this, the game doesn’t have the white ball position indicator that Snooker Nation had. That particular tool was the reason why we were able to get a 147 break in that game but on the small tables here, putting it in would be like activating some sort of god mode and so we’re happy to see it isn’t there. 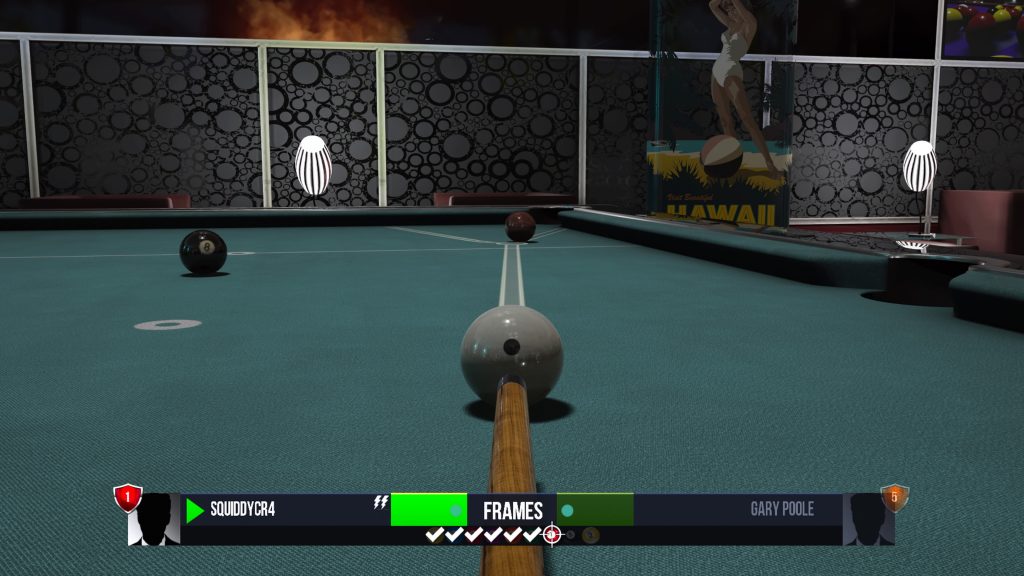 Aside from that though, what else can you say about the core gameplay? It’s slick, the physics are on point and the controls are decent.  The game only has one job to do and it doesn’t fluff its lines there at all.  Everything looks and feels just right, even down to the clackity ball noises which all feel authentic.

To beef things up, Pool Nation does add a few things to mix things up.  Firstly, there are a bunch of pool modes for you from 9 ball, which as we said before is stupid, 8 ball US (which is okay but confusing), 8 ball UK (the best pool) and other variations such as 3 ball and killer, speed and golf (where you have to aim into specific pockets).  A couple of points-based modes also offer some nice variation too.  We were also pleasantly surprised to see snooker thrown in there.  You still don’t get the white ball aiming indicator, which makes this a fair bit tougher than Snooker Nation, but we enjoyed it. 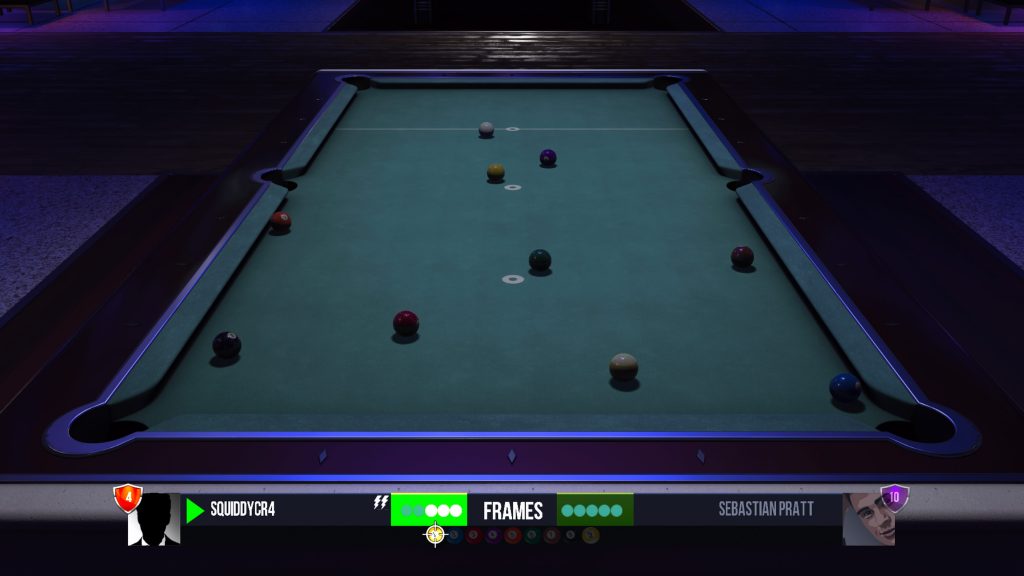 Add to all that the sharp, HDR visuals and a really lovely soundtrack of chilled out ambient tracks and this is a great package.  You also have lots of balls, table decals and cues to unlock for customisation purposes which adds an extra wrinkle to this fully featured pool game.  But there is a fly in the ointment and it has pissed us off maybe a little more than it should.

Snooker Nation had a few glitched trophies which required a patch to fix.  You’d get trophies for reaching certain rounds of the main tournament but some of these wouldn’t register even though you had clearly met the conditions.  Well, on that front Pool Nation is absolutely fucked.  It’s one thing getting the trophy for playing in San Francisco when you are in Sweden but quite another when you are getting the trophy for hitting player level 50 when you are currently level 4 and you’ve just triggered that bullshit because what you actually did is get a 100 break in snooker.  Or the fact that I got trophies for getting to 9 and 12 minutes in endurance mode (a mode where a pool ball is added every few seconds and so you need to clear up before there are 24 of them on the table and the mode ends – it’s actually brilliant) but I’ve not got the ones for 3 and 6 minutes. 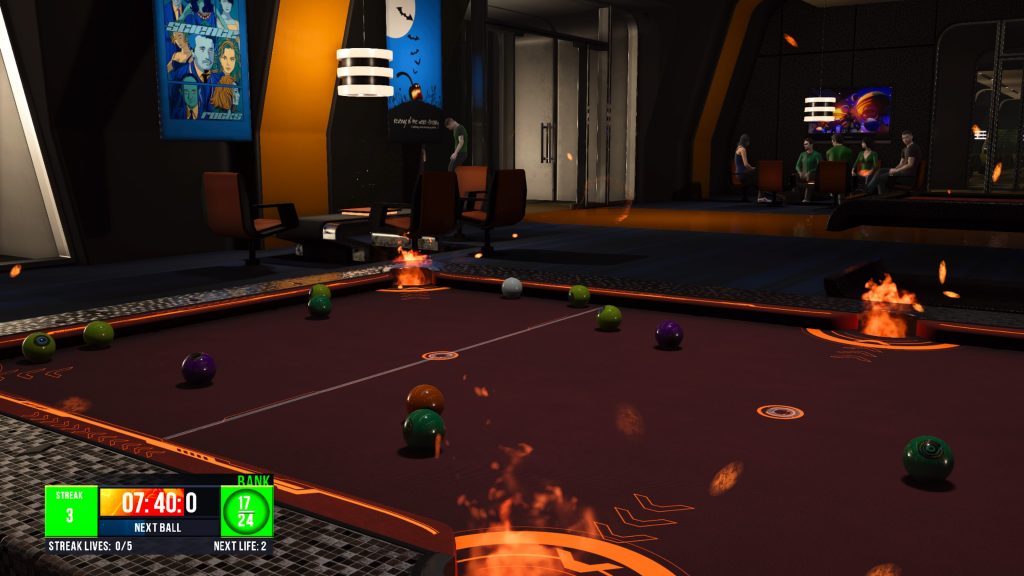 You know, this is basic stuff.  They should have learned their lesson from Snooker Nation and tested it rather than rush out a six year old port in this condition.  If you’re not trophy minded then you probably won’t care but we’ve had a lot of indies with glitchy trophies and we’re starting to lament the lack of playtesting across this market.  Like we said, this may not be a factor for you and it’ll no doubt get patched out but we’d rather see a bit of additional care and attention, especially if we want to use the trophies to get some longevity out of the game.  I’m pretty sure I don’t want to play all the way to level 100 or get 100,000 bucks if those grinds don’t yield the respective trophies.

Aside from that medium-sized annoyance, this is a very good ball-potter.  It doesn’t do anything else apart from snooker and a bunch of quirky variants on pool, but it doesn’t need to so if you’re in the market for a solid, well-presented pool game (we stop just short of calling it a sim) then Pool Nation does a very good job.

Pool Nation
7 Overall
Pros
+ Good physics
+ Really nice music
+ Sharp visuals
+ Snooker included
+ Lots of modes
+ Lots of customisation
Cons
- Limited appeal to a lot of gamers
- Locations are under-used
- Trophies are an absolute mess
Summary
The core gameplay of Pool Nation is sound and offers a good set of modes for pool fans. It's slick, well-presented and enjoyable to play too. A little playtesting and maybe a few upgrades over its six year old PC version might have gone a long way though.