Plox Neon is the second game on PSN, as far as we know, that takes the classic Qix gameplay and injects it with some neo-retro presentation and comes to us by way of Desert Owl Games.  If that doesn’t mean anything to you, Qix was an old arcade game that saw you cutting out large parts of the play area while avoiding the enemies in it.  It remains one of the great risk versus reward games and we enjoyed last year’s XPOSED and are happy to be first site to give this a proper review (it’s been out for a week, but most sites won’t review indie games like this).

Each level is a one-screen affair with very minimal scrolling.  Enemies bounce around in the middle and you are tasked with either trapping them by drawing a line around them, or trying to cut off large areas of the play area.  The bigger the cut, the more points you earn.  Points ultimately go towards a three-star rating system and there are sixty stages to play through.  However, as you cut through the area, you leave a tail behind which leaves you vulnerable.  If an enemy touches your tail, damage sweeps along it quickly, killing you if it reaches the head. 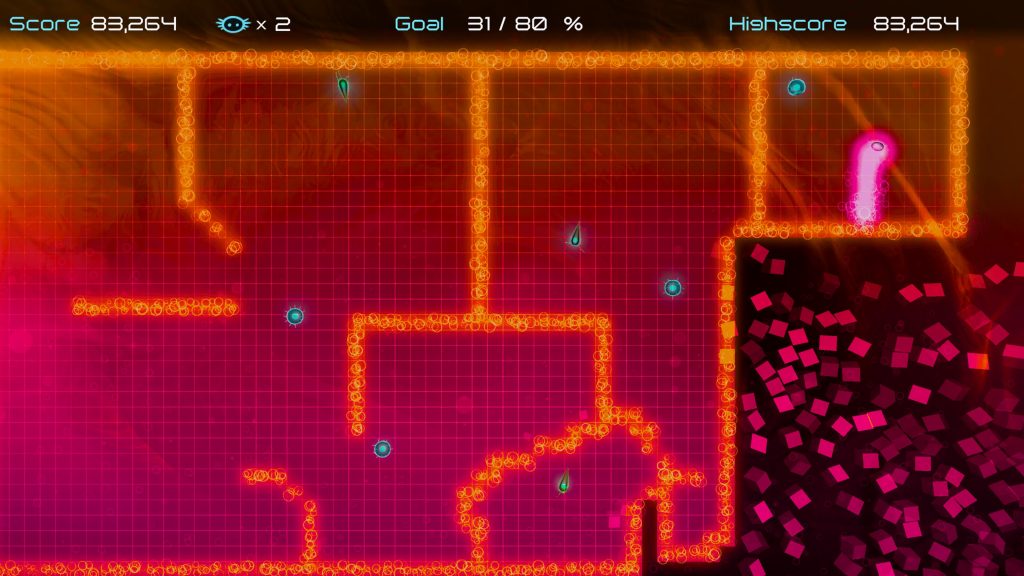 Plox Neon‘s unique take on the genre is that you don’t move in straight lines, you don’t move forward until you stop and you can actually go backwards (erasing the line).  We’ve not really seen that in this type of game and while it does add to the playability, it does make things a tad too easy.  In a game where everything is about risk, being able to go backwards seems a little too forgiving for our tastes.  To balance this, new enemies eventually show up later in the game and these can be a lot more unpredictable, or will even home in on you.

That said, I was able to blaze through the game’s 60 levels, earning three star medals on most of them at the first time of asking (even when I didn’t have an idea about how best to build up my score) which is a shame because the game has a lot going for it.  It is playable, the controls are great and the presentation is pretty dynamic for this kind of game.  The neon visuals are nice enough and the game isn’t too strict about putting lines everywhere.  On top of that the soundtrack is absolutely fantastic with some truly excellent tunes that really add some excitement to the game.  The only downside to the audio is that a few sound effects come through your DualShock 4 and that can’t be disabled in-game without turning all the sound effects off. 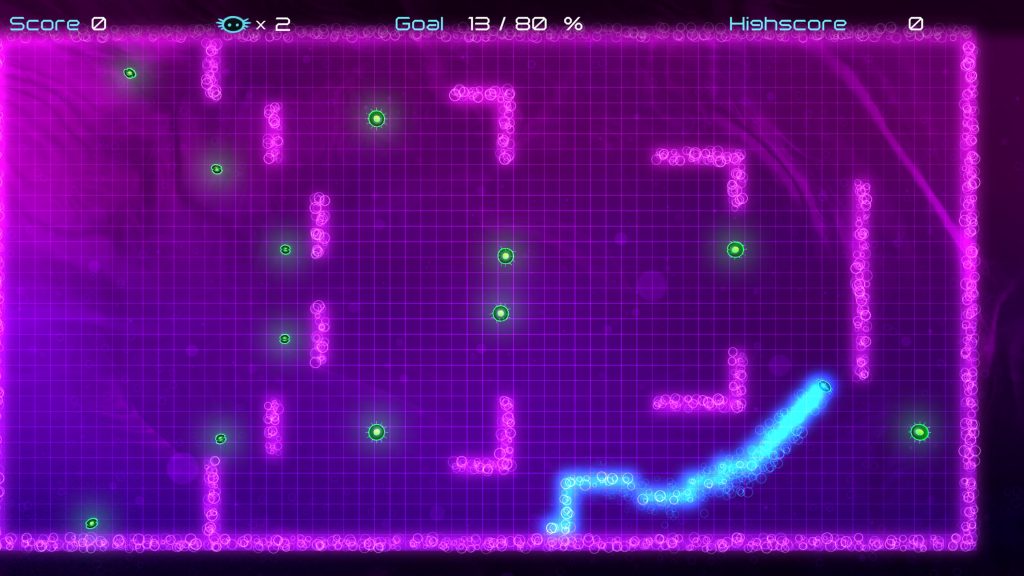 A more serious problem is that the collision detection is pretty bad in the game.  What should be a game of precision, judging each risk down to the pixel, ends up seeing you veering well out of the way of enemies because you’ll die if you get within a certain distance of them.  It feels like bullshit when it happens and is a cardinal sin in any 2D arcade-style game.  Also, random moments of slowdown did occur, as did a couple of bugs such as levels not finishing when I’d cleared 100% and my final trophy not unlocking at the time of asking (and why no platinum?).

So, while we’re fans of the concept of the game and really did enjoy the short time we spent with it, Plox Neon feels like it needed a bit more time spent on playtesting.  For now I’d say XPOSED is your best option for some Qix-style larks but this isn’t a bad game.  It’s just not as good as it might have been.

Plox Neon
6 Overall
Pros
+ Some good, simple Qix-style action
+ Great soundtrack
+ Bright visuals
+ Good controls
Cons
- Too easy
- A bit buggy
Summary
Plox Neon is an okay option for some Qix-style gameplay for PS4 owners but a lack of difficulty and some technical issues mean it's not the best one.