One thing I like about this job is the opportunity to be genuinely surprised by something. I’ll admit my expectations for Peaky Blinders: Mastermind, based on the BBC drama, were pretty low. Futurlab are at the helm who you might remember as the developers of Velocity2X. They’ve been prolific over the years but games tied to TV properties don’t always have the best track records. 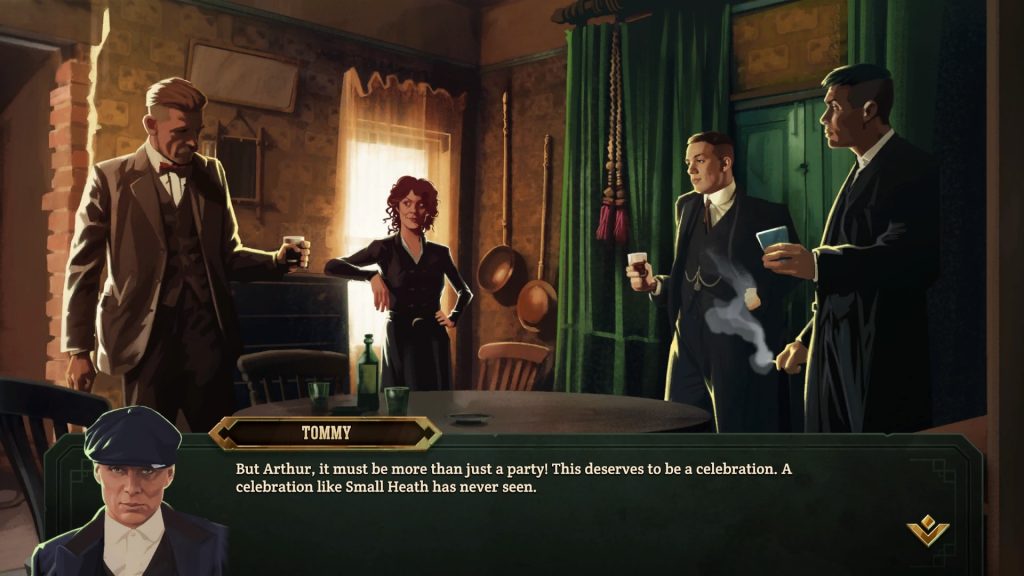 Having only a passing interest in the show, I wasn’t too sure how they’d translate the gangster shenanigans into a game. The plot plays a simple enough narrative of the Peaky Blinders dealing with the combined strife of rival gangs and an antagonistic police force. The cast is represented with some great portrait work that utilises their likenesses. Unfortunately, the lack of voicework makes the cutscenes feel flat and basic. Still, the plot manages to provide something cohesive and twist through 10 levels. It leads to a satisfying conclusion and manages to keep itself focused.

Despite the lack of voice acting, the environments have had plenty of work done to them. The Victorian setting is well realised with cluttered alleyways, overhead walkways and plenty of buildings to sneak your way through. Dogs bark, people fight and plenty of other activity helps make the levels feel lively and active. Small Heath is well recreated and the in-game dialogue helps sell the Peaky Blinder‘s stature within the town. 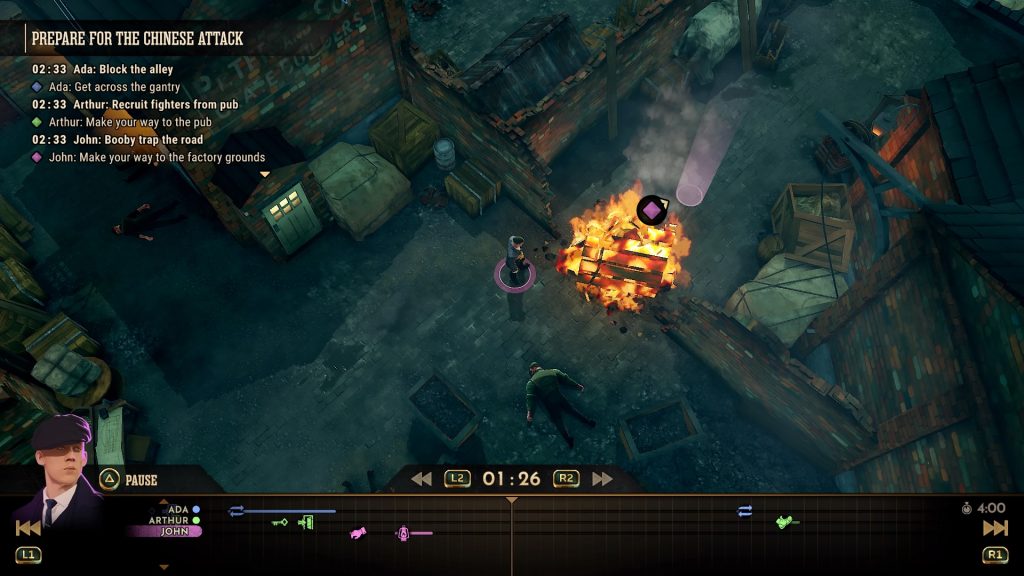 The game itself is all about puzzles and stealth. Your gang of pickpockets, brawlers and thieves assemble to tackle a number of different tasks against the clock. You’re given an strategic overhead view and usually have at least two members to work with. Each have their own set of unique skills which you must utilise to get the job done.  You’re given a handy timeline at the bottom of the screen to keep track of who is currently doing what.  If you’ve ever edited a video or audio file, seeing each track play out will feel familiar.

The men of the group are handy with their fists but can’t be sighted by the police. Meanwhile Polly and Ada can run distractions to help them sneak through. Finn can sneak through gaps and pickpocket. It’s a varied cast with plenty of abilities to tinker with. It doesn’t lead to multiple solutions but it does a good job of instructing you who is good at what.

You have the ability to rewind time which becomes crucial as you get everyone to their marks. It provides a quite methodical experience as you experiment to see who can go where and what else needs to happen to get everyone through safely. It’s like setting up a clockwork village, at times. You can switch between characters easily and failure merely means rewinding the clock and finding a way through it. 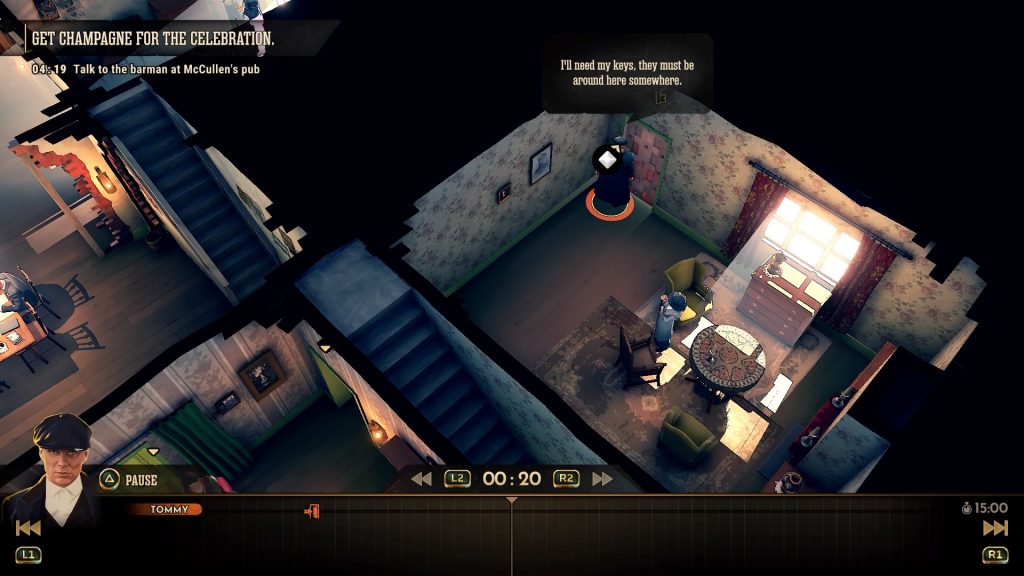 I really enjoy the meticulous nature of pulling off a successful mission. The campaign begins slowly, introducing the cast to you in manageable chunks. In the latter stages, you’re tasked more with managing a full crew. As it ramps up in complexity, the challenge becomes managing several threads at once. It’s very engaging and the later stages can really test your ability to multitask.

The time limits rarely provide a huge obstacle and the bronze medal times required to unlock the next mission feel fairly generous. It is satisfying to shave your time down and you can bump the difficulty up if you want a sterner challenge. Deducing what you need to do can be slightly cumbersome, especially if you have two characters in tow who perform similar roles. Thankfully, there is a hint system that points you explicitly in the right direction.

It feels forgiving which allows you plenty of time to experiment. You can pause the action and use the camera to scout ahead. I also find that the game does well to split the group off in very deliberate ways. Keeping you in groups of two or three characters helps you understand what’s required in that section of the map. Whilst the maps can be expansive, the amount of levers and doors you need to tackle manage to keep things restrained and bite-sized. 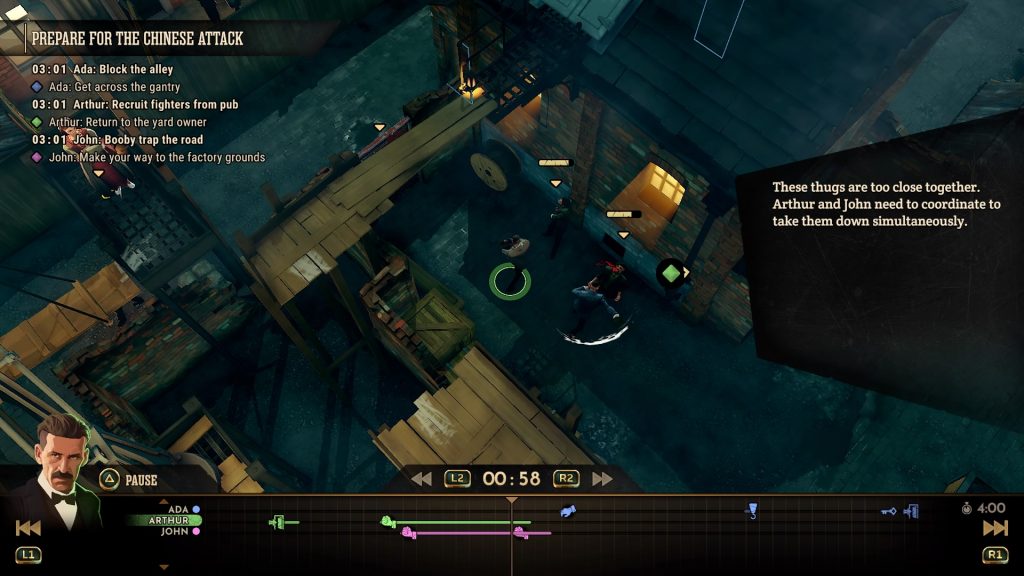 It rarely gets frustrating and, whilst the initial offering of 10 levels might feel small, the latter stages deliver much more involved efforts. You can replay them to chase gold medals and each level contains watches to collect. The campaign will take you a handful of hours and it can be compelling to perfect each level. I found it fairly enjoyable and you can tell a lot of care went into creating it.

I really wasn’t sure what to expect from Peaky Blinders: Mastermind. Giving the game a strategic nature works wonders and manages to present the gang as an effective ensemble. Utilising all the members effectively and pulling off successful capers can be very rewarding. I do wish the license was leveraged better but, despite the lack of voice acting, this is a compelling effort.

Peaky Blinders: Mastermind
8 Overall
Pros
+ Great, meticulous gameplay.
+ A varied cast of characters with their own specific roles.
+ A smartly designed campaign.
+ Environments are well designed and feel lived in.
Cons
- The story feels flatly presented.
- No voice acting from the TV cast.
- Sometimes time limits can be incredibly tight.
Summary
Peaky Blinders: Mastermind is a pleasant surprise. Whilst the license isn't used to its fullest potential, the gameplay delivers a satisfying, methodical puzzler with plenty of moving parts to consider. The levels have plenty of life to them and the more complex missions really allow the characters' unique roles to shine. For something that could've felt like a cheap cash-in, Futurlab has developed something compelling and fascinating to play through.