It goes without saying that if you want any new ideas in gaming, you’re best off looking to the indie scene but you do not expect much innovation from a game about cycling.  However, Descenders from Dutch devs, Ragesquid, offers a new spin on the genre.  At its heart, the game is simply an off-road mountain biking game.  Think Trials but seen from behind but then stop thinking about Trials because that’s only part of the story here.

Sure, the game involves you racing down a bumpy track but this game is less about precision and memory.  That is partly because the game is a lot more forgiving and a bit more realistic but also because the tracks here are randomly generated.  However, the real innovation is that Descenders is a roguelike.  Yep, the sub-genre most commonly associated with RPGs and twin-stick shooters has been applied to mountain biking.  And sure, that might sound a bit weird but it really works. 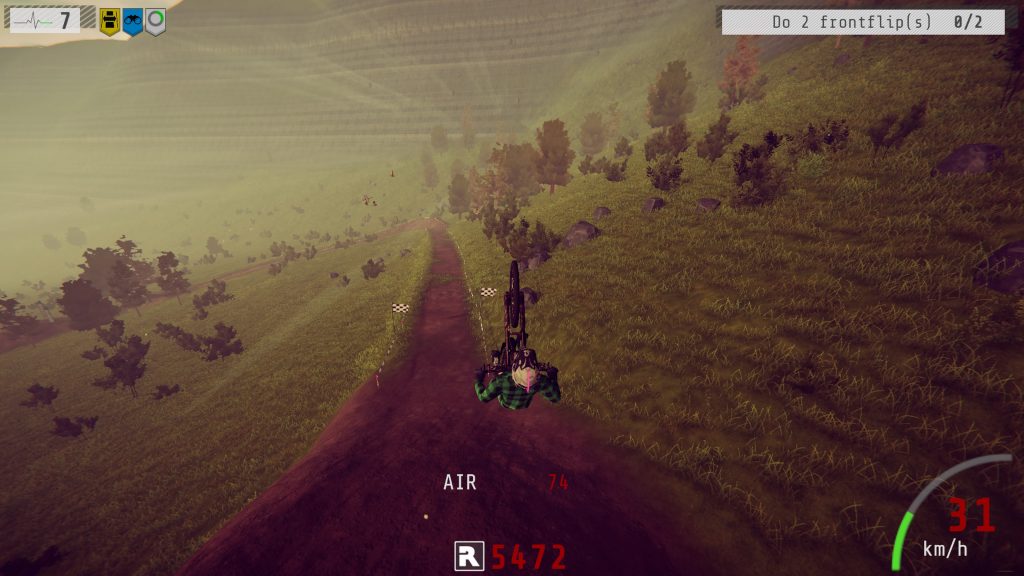 You’ll be spending most of your time in the game’s two career modes.  These both offer four environments, with each having its own character and style of tracks.  When you start a career, you’re faced with a map screen with nodes all over it.  Each node is a level and you can choose your own route to the ‘boss’ level.  As we said, each level is randomly generated but the node screen shows you the type of track you can expect by giving values for steepness, curves and jumps.

On the track, you’ll notice a couple of things pretty quickly.  Firstly this game is FAST but also it immediately feels fiddly with the controls seeming pretty loose.  Initially we weren’t too sold on it but after a few minutes we were happily speeding down the track, tricking off of any ramp we could find and carving through the sharp turns that the track had generated.

The looseness of the controls did make us think of similar off-road racing games from the PS1 era but they are pretty forgiving.  If you don’t land absolutely perfectly, it won’t matter.  You’ll probably be fine.  The turns tend to be more of an issue though as you’ll need to worry about trees lining the track.  That’s where Descenders is a lot less forgiving with even low speed impacts leading to a crash. 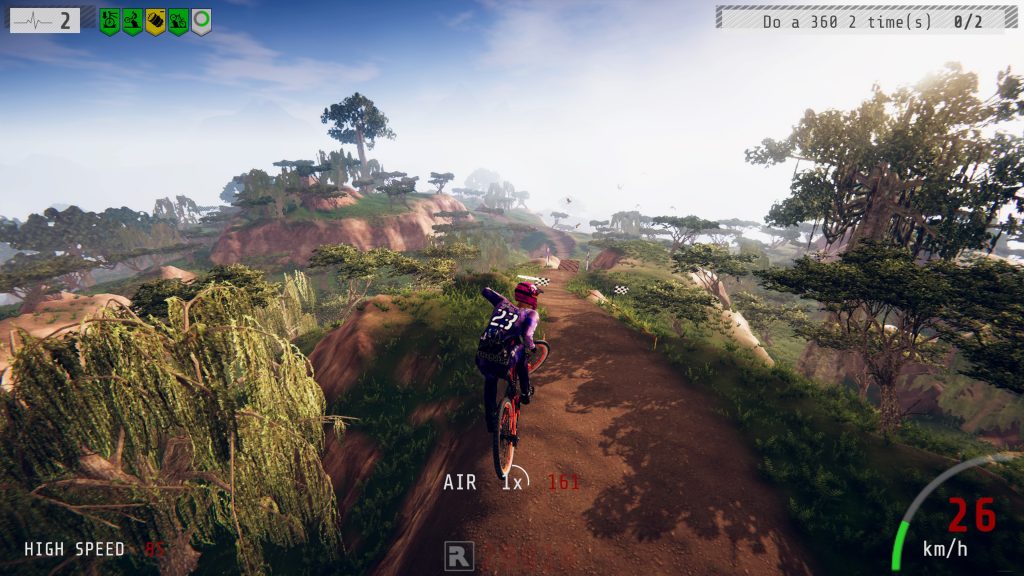 The other way that you’ll likely come a cropper is during the stunts.  Launching off a ramp will give you a bit of air time where you can pull off a trick.  You can flip and rotate with the left stick while the right stick is used, in conjunction with the L1 button, to modify with various tricks such as no-handers and other tricks where your limbs end up pointing somewhere rather than being on the bike.  This is a little bit unintuitive just because you’ll be pawing at three different parts of the DualShock just to pull off basic tricks but it isn’t too bad and before long we were landing modified back flips.  Again, the game is pretty forgiving about landings but you’ll still need to be careful in your execution.

You’ll need to get used to tricking because this is the biggest aspect of the game which is odd because of how fast it is.  You’d expect the game to be more about the racing but a tool tip on the loading screen tells you that isn’t what the game is about at all.  Descenders manages to convey a sense of speed that is unmatched by anything else we’ve ever played.  I don’t care if you’re playing F-Zero or a realistic motorbike sim, this is the first game where we were actually afraid of the speed.  But if you decide to gently pedal to the finish line, that’s fine.  The main objective is to survive but you’ll also need to get your ‘rep’ up with tricks and complete bonus objectives.

The ‘rep’ thing lets you unlock crew members who will provide benefits during this career run.  These either affect your riding by improving your control, improving your chances of landing after big air or increasing your balance or they’ll modify the tracks you ride on by reducing curves, adding more ramps or increasing steepness.  These are welcome modifiers but if we’ve got a criticism, it’s that their effect feels a bit too subtle which throws out the risk vs. reward balance a little bit. 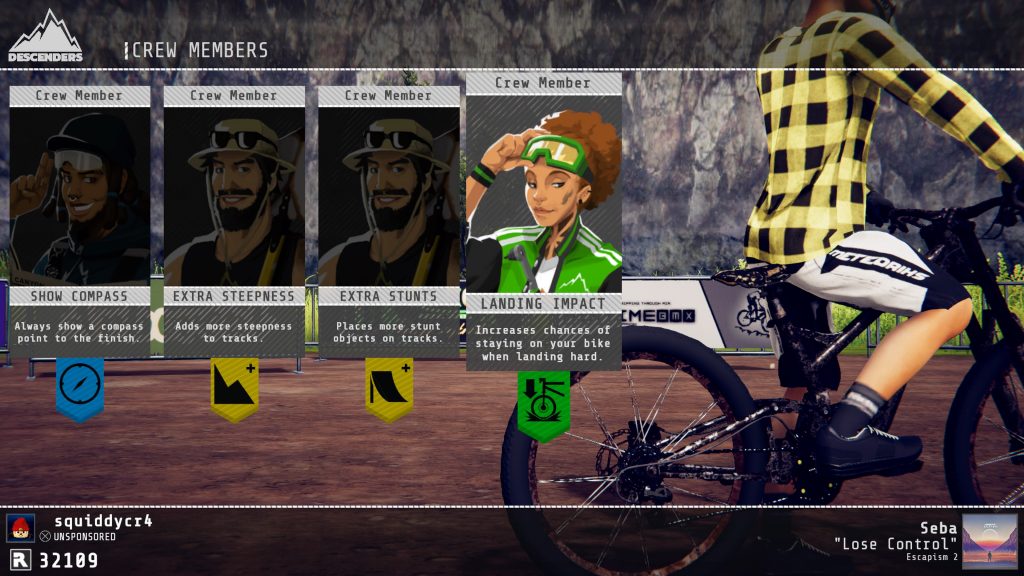 What you’ll really want to focus on are the bonus objectives and how these play into the whole rogue-like aspect to the game.  When you start a career run, you’ll have four ‘lives’ and you lose one each time you crash.  With four areas to get through, each with several tracks for you to complete, you’ll want to preserve your life count as when one is lost, it doesn’t get replenished once the current track is completed.  But you can earn a new life if you beat a track’s bonus objective.  These can be trick related, asking you to land a couple of 360s or flips, or they can involve you not letting off of the acceleration for the entire track and things like that.  These are pretty easy to earn but it’s also similarly quite easy to lose lives too.

The system works brilliantly and encourages you to take some chances while being mindful of your lives and we really, really like it.  What we like a little less are some of the ‘boss’ levels.  To finish an area, you’ll need to make your way to the boss level where you’ll find a large jump for you to successfully take on.  These can be a bit awkward.  We’re really struggling with the first level of the second career where you have to jump a pyramid.  We’ve managed to lose a stock of seven lives trying to complete bonus objectives on that thing but the majority of the the boss levels are better.

From the impressive sense of speed to the clever roguelike system, we’re really happy with Descenders.  The environment types all add their own character and offer some good variation between track types too.  So from a gameplay point of view, we’re really having difficulty putting this game down. 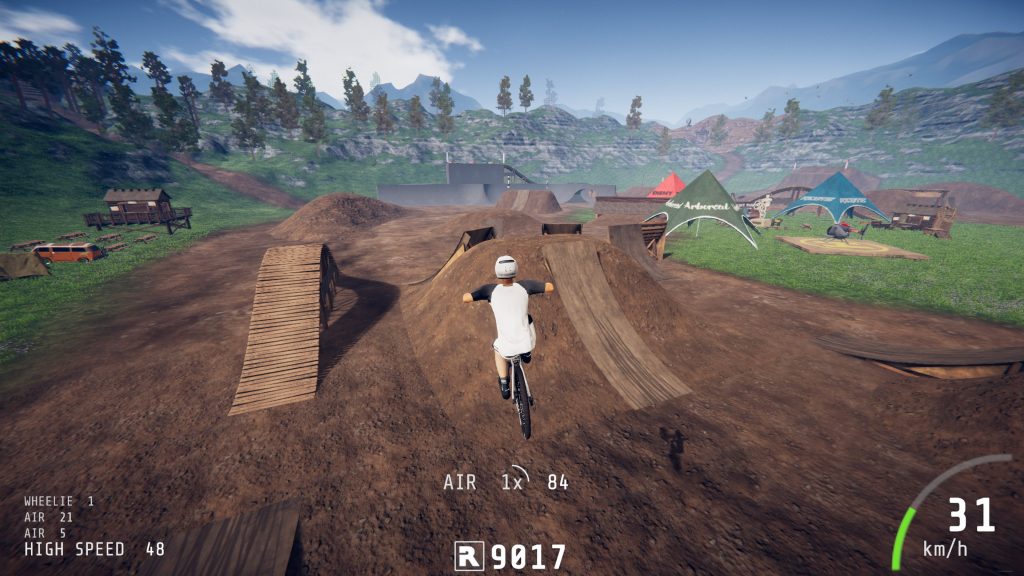 The presentation is pretty good too.  Initially the visuals might seem a bit limited with a fair bit of repetition and some texture pop in but it looks good enough and once the speed kicks in, you’ll be completely in the zone playing the game.  The fact that the visuals are keeping up with the gameplay while holding a solid frame rate is good enough for us.  The different environments all look different enough too and the graphics on your rider are fine.  There are a lot of customisation options to be earned too which is welcome.

The audio in the game is okay.  The sound effects do their job but we weren’t hugely impressed by the soundtrack which is pretty much all just modern ambient drum and bass.  If you know anything about that genre, you’ll know that the drum patterns are ALWAYS the same (snares on 2 and 4, kicks on 1 and 3.5) and it sounds more like dinner party music than something to really pump you up.  But that’s just us and the fact that we really miss the ’90s.

Overall, Descenders is great.  We love the innovation, we love the speed and we love the addictiveness.  While we didn’t expect too much going in, we’re happy to report that this is a true indie gem.  In an era where indie games are mostly twin-stick shooters or moody games about feelings, to get something this arcadey and enjoyable is a real treat.