Neptune and company are back with a new title, Neptunia Virtual Stars on PS4. Neptunia titles come in two flavours: JRPGs and spin offs which can be of any genre, from hack and slash to idol manager. This is a spin off, with the goddesses of Gamindustri now wielding guns in order to save VTubers. 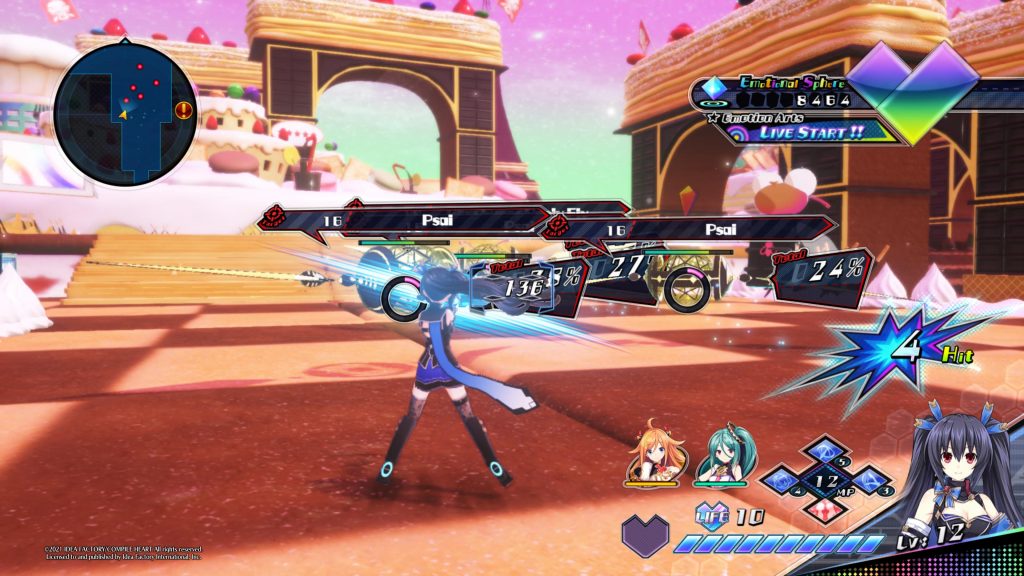 What’s a VTuber? Maybe YouTube has recommended a video to you of an anime girl playing video games, that’s a Virtual YouTuber or VTuber for short. Using face and sometimes body tracking technology YouTubers take the form of an animated character and usually also put on a cartoony voice and specific personality. It’s an odd thing but incredibly popular at the moment with even seasoned YouTubers adopting this approach rather than having their actual face on screen. It fits well with the Neptunia aesthetic.

The story goes that Neptune, Noire, Blanc and Vert have been summoned to another dimension where all ‘Content’ is being destroyed which is turning the citizens into Antis, basically negative people. VTubers are a source of positivity and so a huge number have been captured and it’s up to the goddesses to rescue the VTubers and defeat the big bad causing the trouble in the first place. I think that’s the case anyway. 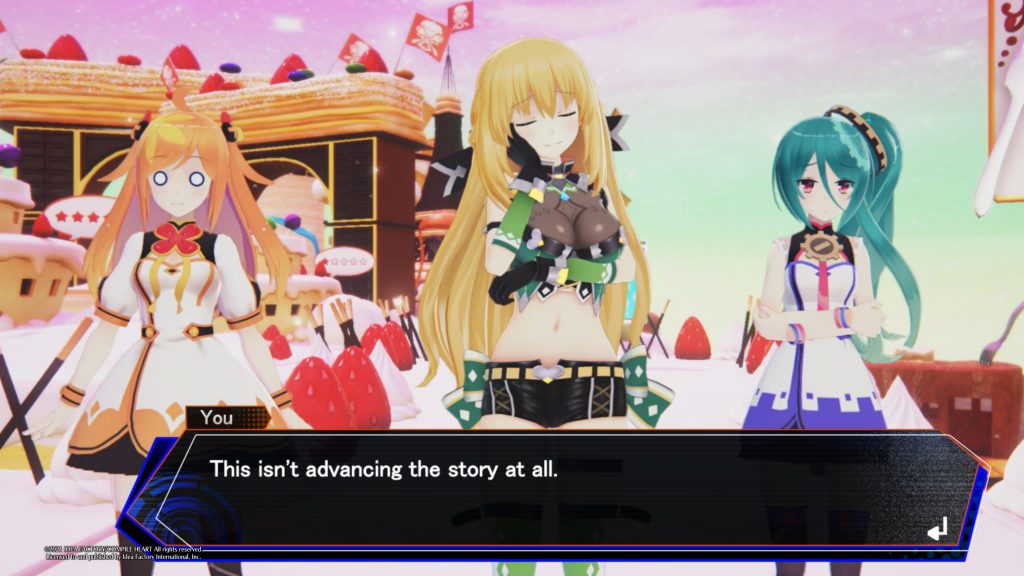 As with all Neptunia games the story is both very simple and yet overly complicated. This is due to the amount of cutscenes and the fact that they rarely stay on track, with many scenes not moving the story forward at all. I would say they were character building but the characters aren’t really deep enough to require any although, depending on the game, I have enjoyed their personalities every now and then in the past. We do get some new characters of course in the form of fictional VTubers but most of the regular extras are absent if you’re a fan of If, Nepgear, Umi et al. Basically the characters like to talk a lot whilst saying very little but that has always been the case so if you’re a fan then that won’t bother you too much. What might bother you is that there is no English language option, you only have the Japanese voices this time.

Once you actually get to the gameplay you have a couple of options. You can play as Neptune, Noire, Blanc or Vert, switching between them on the fly with their different firearms or you can play as You or Me (with a couple more joining later on), a pair of VTubers, one wielding a sword and the other a bow. You can switch between the two sets at any time and they play quite differently. 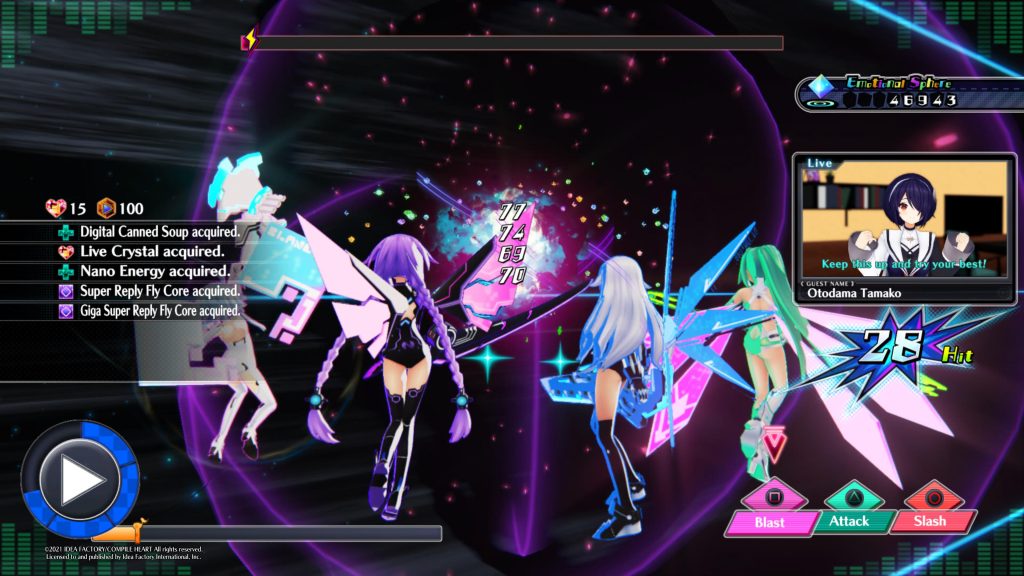 The goddesses each have a gun (which fires positive energy or something, rather than bullets). Neptune has a rapid fire machine gun, Noire’s is a slightly slower but more powerful one, Blanc’s requires charging for its full effect and Vert’s is a sniper rifle which can paralyse enemies. If you hit an enemy enough then their heart will flutter and they’ll be disabled for a time. Me is a melee fighter so controls quite differently. You need to get in close and slash with your sword but you can also time a dodge which will give you free specials for a time. The same is true for You but she has a bow so is better at range. Certain enemies will be weak against a certain VTuber so switching helps greatly. Each character also has specials that are attached to the face buttons which are limited by a fast recharging MP meter. If a VTuber defeats an enemy with a special then they can perform a finisher which will grant a boost to HP and MP.

It all sounds quite complicated and the tutorials throughout the game are actually pretty ineffectual at teaching you. You will learn as you go however and you’ll find that actually its pretty straight forward. I primarily used the gun toting goddesses, switching between Neptune and Noire as I preferred their weapons. You run through the levels and when you reach a more open area enemies will spawn. There’s no cover mechanics or anything like that, you just have to run around shooting at enemies that are either coming at or shooting at you. Gears of War this ain’t. 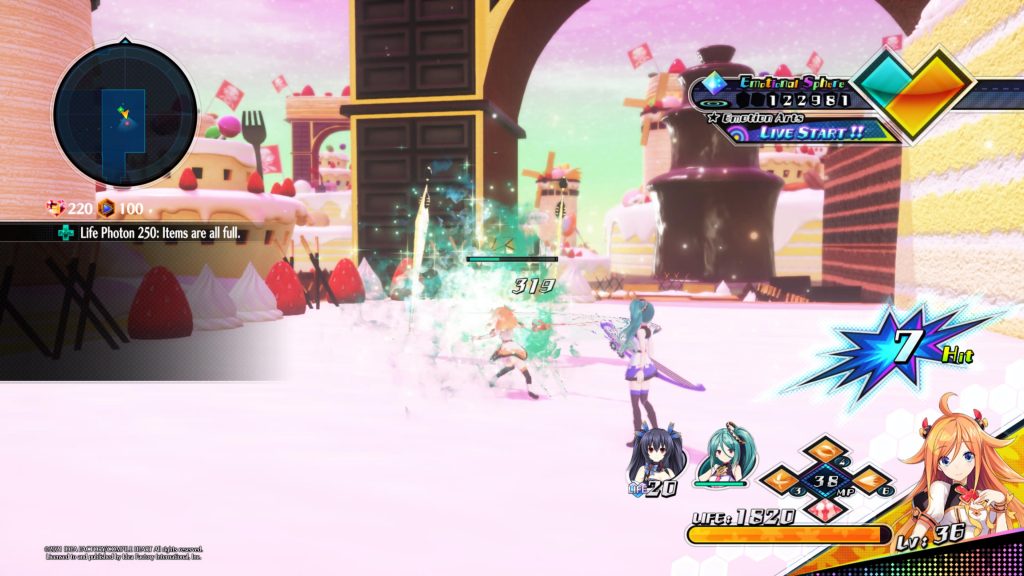 To start with this is a little painful as you aren’t that strong so it’s slow going and the levels are very straight forward. As you go through however things improve, somewhat at least. The levels get more complicated, still obviously made up of corridors and rooms but you’ll have to take certain paths to hit switches which will open new corridors elsewhere, and you’ll collect items that’ll make you stronger.

There are actually loads of items to collect, you’ll constantly have items flying into you as you defeat enemies and break boxes. The important ones are the VTubers however which can be saved from enemies, released from boxes or as a bonus with a screen clearing attack. You can equip five VTubers to each character and they’ll provide bonuses to life, attack, defence and even passive buffs like higher item drop rate. Managing these is important to making the game less of a chore, though there are so many that managing them can be a chore in itself. 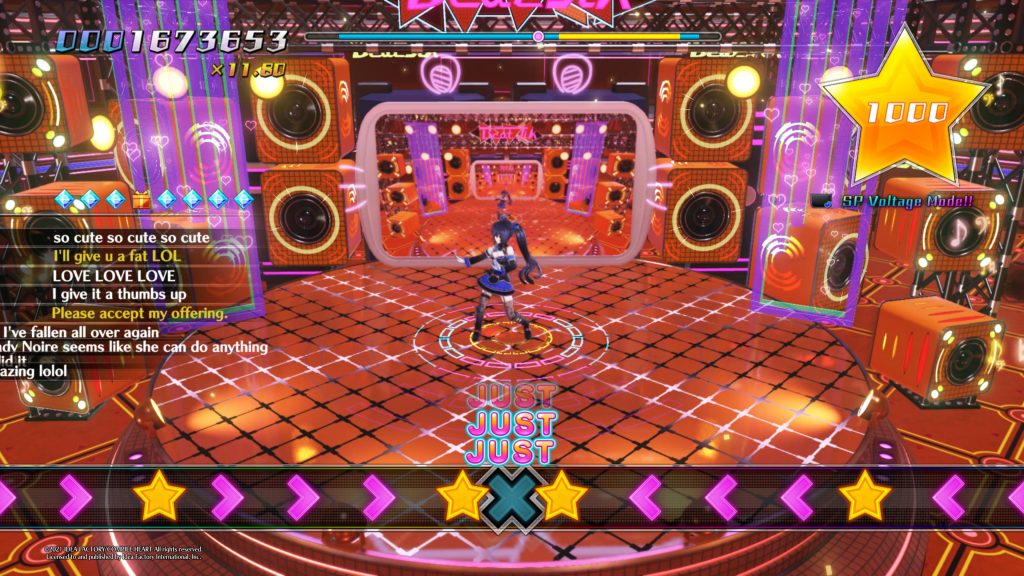 There are also cosmetic items to equip which will boost your ‘Kawaii’ for a minigame called BeatTik (a very simple rhythm action game) which you can then use the videos from to generate yet more items, hundreds of regular items to use to regain health and the like, items to convert into DP (which is used to upgrade the VTubers), music and collectible cards. It’s all a little unnecessary. It’s like the gameplay itself is very simple, including the range of enemies and even bosses which repeat despite there only being nine chapters, but extras have been added to everything else to give the appearance of depth.

As I said however as you progress the game does get better. Not the story and the mechanics never change but the levels get a little more involved and you get strong enough that just taking out rooms of enemies is fast paced. The graphics are also improved from the Neptunia games I’ve played in the past, not pushing the console massively but the characters have more detail and the worlds although boxy have more depth to them. I will say it’s one of the noisiest games I’ve played however. Neptune has always been a chatty one as you play but she takes it to another level here as she seems to talk as often as she fires her rapid fire weapon. This isn’t helped by the inclusion of the VTubers. 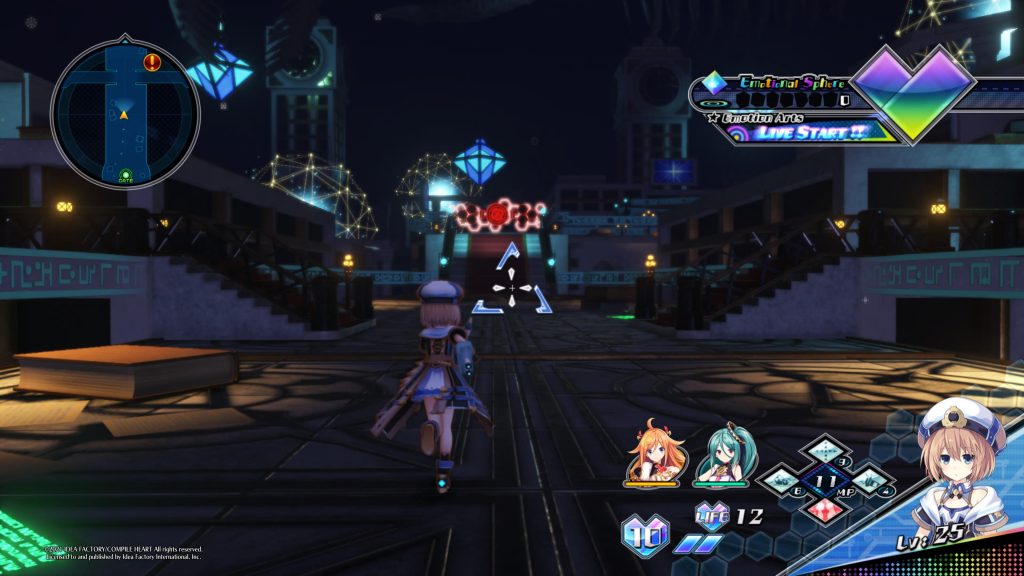 They are a massive part of the story but the ‘real life’ VTubers that exist in this game don’t have any direct part to play in the story, instead you’ll just see videos of them. As you’re running around the levels they’ll pop up on a screen and start looping whatever it is they’ve recorded, on top of your character constantly talking, on top of enemies making noises, on top of the firing of your gun. It’s not a treat for the ears.

Otherwise the only time you’ll see VTubers not in card form will be on loading screens where they’ve prepared intro videos, sometimes talking about how boring loading is, to fill the time. The thing is the load times are actually really good so a skip prompt will appear part way into a thirty second video which seems to be there to promote that specific VTuber, which feels odd in a paid for product. I’ve seen VTuber content before but being told to check out a channel whilst I wait for a load didn’t do much to convince me, but maybe fans of the scene will discover someone new or those who haven’t seen it before will find a jumping on point. 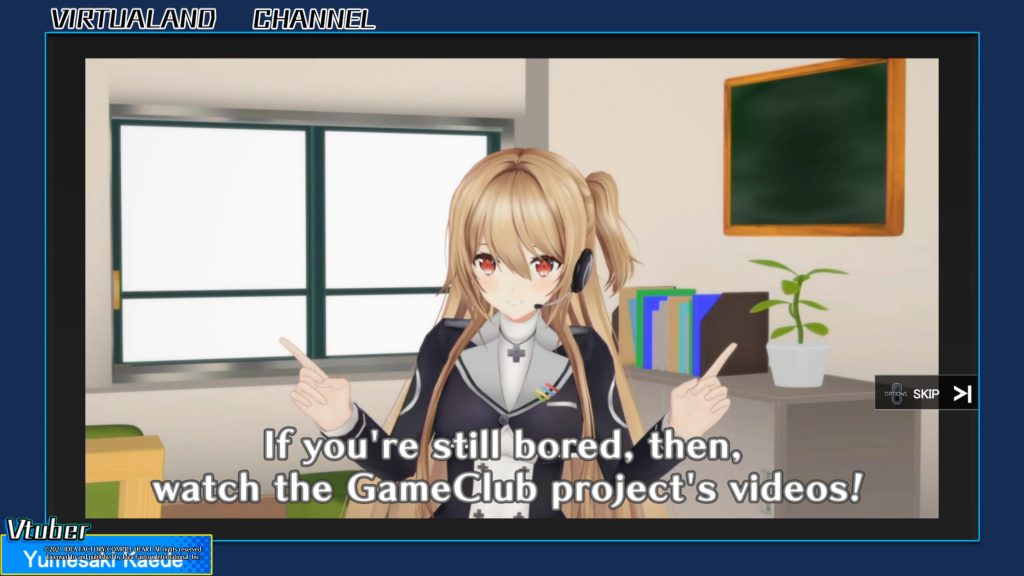 It feels like I’ve talked more about the concept than anything else in this review and that’s because the gameplay is pretty slight. I’d argue the whole VTuber thing is underused as well, as although they’re all over the story and loading screens there is no real interaction with ‘real’ VTubers so it ends up feeling a little like the 7 Up product placement in Cool Spot or something. Still, if you’re a fan of the characters already and are not expecting some epic adventure then Neptunia Virtual Stars is a carefree time. I’d have liked a little more depth to the combat itself but if you approach it in the right frame of mind then, as with most Neptunia games, it’s a light hearted romp.

Neptunia Virtual Stars
6 Overall
Pros
+ Fun concept
+ Fast paced gameplay once levelled up
+ VTuber fans will enjoy the cameos
Cons
- Actual gameplay is pretty shallow
- Poor tutorials
- Characters talk and talk and talk
- Story is weak
Summary
Neptunia Virtual Stars may be an action game but it has many similarities to the rest of the series. The characters talk too much and the gameplay is quite simple despite the complicated tutorials but once you get into it the action is fast paced and inoffensive.