Bullet Beat is a confident little shoot ’em up is from Ternox Games and is best described as a mix of Space Invaders Infinity Gene and Rez.  It’s a cheap and cheerful addition to PSN’s ever-growing library of shoot ’em ups and is aimed at arcade fans and anyone who still remembers dubstep.

The game is a hybrid of single screen and vertically-scrolling shoot ’em ups where you are at the bottom and you destroy any enemies above you as they swoop or materialise into the play area.  You’re armed with a basic blaster and only have movement (on the left stick or d-pad) and one fire button to worry about.  The game gives you a choice of a ‘campaign’ mode (which just gives you ten levels to work through with no story) or ‘endless’ which is more of the same but longer. 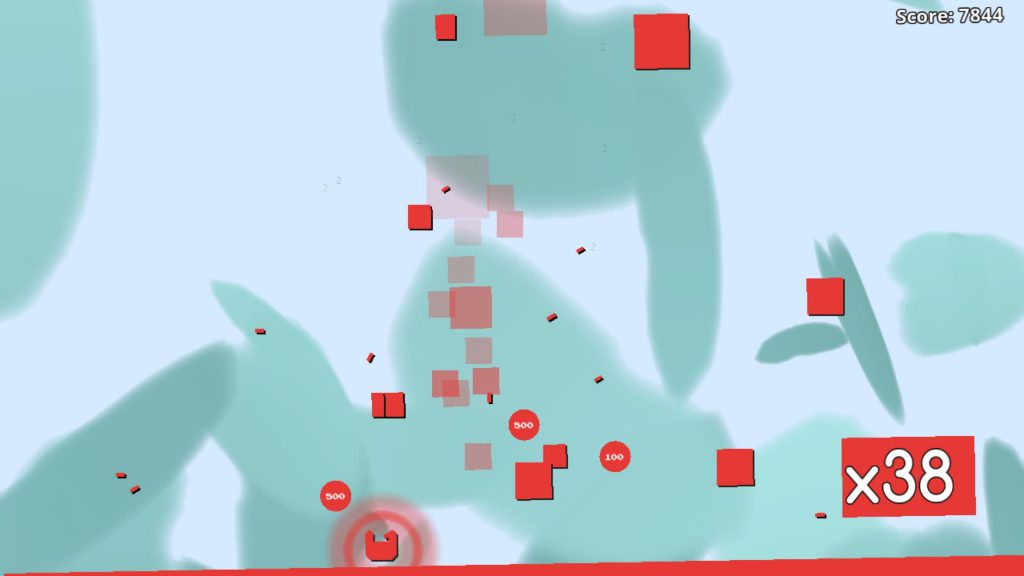 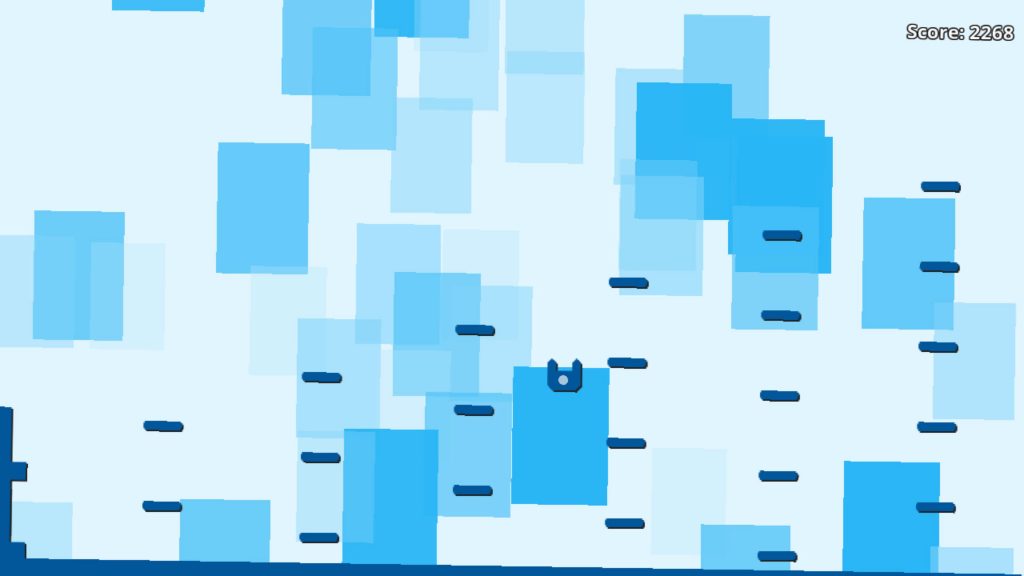 In terms of gameplay, there aren’t many more wrinkles than that.  Enemies drop power-ups that give you temporary boosts to your firepower and there’s a combo-based scoring system which encourages you to kill enemies in quick succession to build your multiplier up.  The good thing about the power-up system is that you can earn several at the same time, turning you into quite the formidable force.

Most of the game’s levels are punctuated with end of level bosses and you’ll get the occasional mid-level elite enemy to deal with also but that’s basically it.  There are a couple of moments where objects attach themselves to you and a couple of sections where you’ll be dodging things in the background (although for 95% of the game, there is no level detail at all).  I wish there was more to write (I’m only at 281 words now and I need to pad this mother out) but that’s really the gameplay summed up. 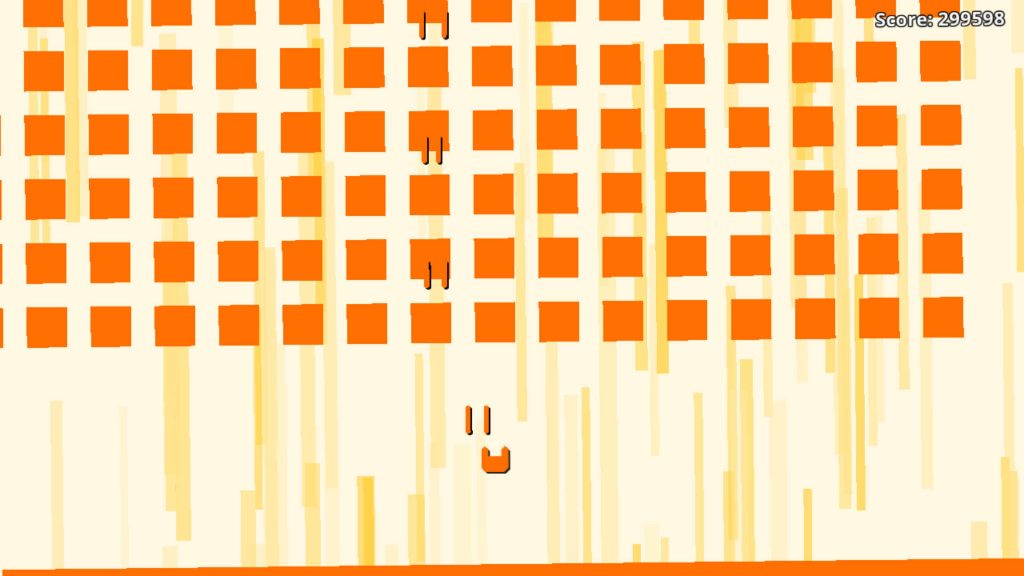 Bullet Beat‘s thing, and the reason for the Rez comparison earlier, is the way it integrates music.  The game syncs enemy fire to the beat of the music and enemies pulse in time to it also.  It doesn’t meaningfully affect the gameplay (for example, the scoring isn’t tied to shooting on the beat or anything like that) but it does make the music more prominent and gives you a feeling of connection to it.  The game generally opts for big, bass-heavy dubstep tunes which all sound pretty good (especially if you’ve got a decent soundbar).  If dubstep isn’t your thing, you might want to swerve it though.

The game makes similarly bold choices with its visuals.  The action is mostly monochromatic with you, your enemies and all the bullets sharing one hue.  The colour changes between levels (and there’s a little bit of colour in the backgrounds) but it is a very stark look.  Both the graphics and gameplay evoke memories of Taito’s sensational Space Invaders Infinity Gene but not quite to the same effect.  That said, the game gets a bit more intense towards the end and the visuals do get a tiny bit more interesting. 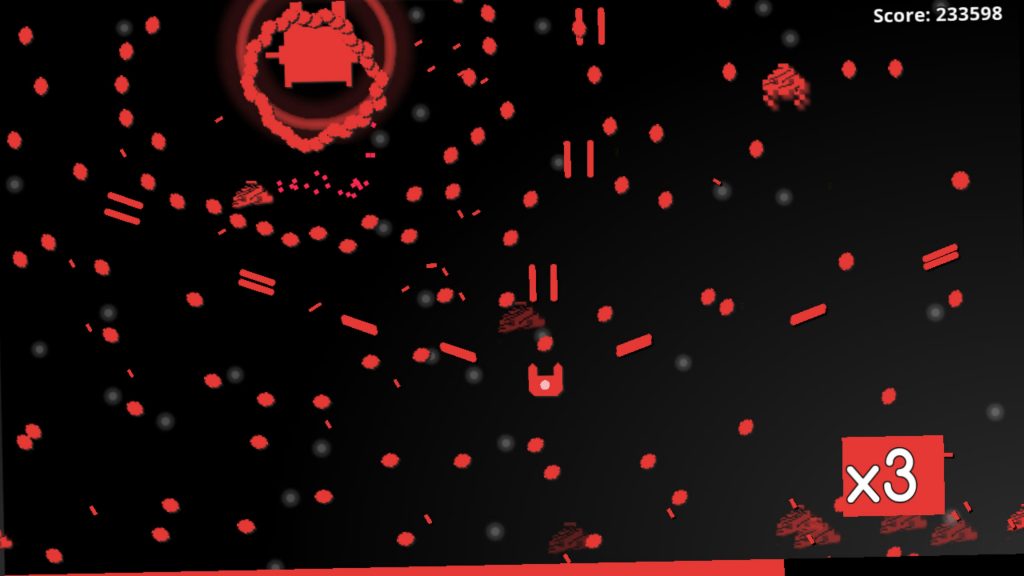 While Bullet Beat is playable and reasonably enjoyable there are issues.  The minor ones are that some boss battles go on for too long, especially because it is hard to tell if you are damaging them (the game’s colour scheme won’t allow for much of an indication that you’re hitting them in the right spot) and that the game is a bit too short and repetitive.  Some enemies hover below you where you can’t get them which just kills seconds until they reposition.  Our main gripe though is that the game has no leaderboards.  For a shoot ’em up that really has nothing about it (gameplay-wise) apart from a scoring system, having no leaderboards (either online or off) makes any kind of repeated play entirely pointless (pun semi-intended).  Any replay value then rests on the game’s trophies but you’ll take them down in thirty minutes.

So while Bullet Beat doesn’t have any broken elements, it just feels as though it is missing some key and obvious features that would have put more meat on its bones.  The game’s ten levels are short and light on set pieces and moments of interest, the music gimmick is for presentation only and doesn’t add anything to the gameplay experience and while it all feels exciting at first, just muting the sound is enough to reveal the gameplay’s obvious shortcomings.  The game is cheap and feels reasonably polished but don’t expect a meaningful or lasting experience from it.

Bullet Beat
5 Overall
Pros
+ Nicely presented
+ Good soundtrack
+ Easy to pick up gameplay
Cons
+ Too short and repetitive
+ Lacklustre gameplay
+ No leaderboards
Summary
Bullet Beat's mix of shoot 'em up action and booming music works well initially but the simplicity of the gameplay and a general lack of features soon take the shine off of what could have been a decent effort.