It might not be new territory but StarBlade’s kickstarted project arrived last year on PC with the perspective of playing the bad guy. Now Playstation 4 owners have the chance to inhabit the mind and lair of a supervillain. 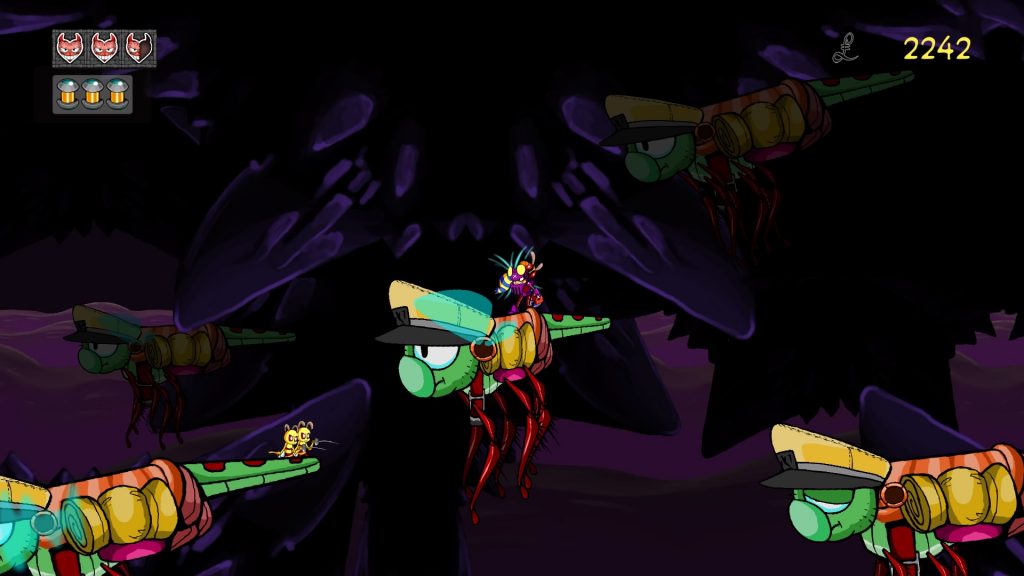 Nefarious manages to have some real fun with it and executes on the premise really well. Crow’s got the usual mobile death fortress, robots and vehicles at his disposal to turn against the various heroes that cross his path. The premise is played very tongue-in-cheek with some fantastic writing. The pursuit of princesses makes Crow seem driven, funny and, dare I say human?

As a platformer, Nefarious does fall short. Taking huge inspiration from the MegaMan series, jumping is floaty and a little imprecise. It makes for a troubling latter half. Combat is simple but I’ve found hit detection to be a little off. You can miss strikes when you’re right on top of enemies. Checkpoints are frequent but it’s worth upgrading health and ammo for the sake of surviving some of the game’s tougher levels. It’s not a difficult game but, the game does try to up the ante near the climax and the controls aren’t robust enough to stand up to such scrutiny. It’s a shame but I found it something I’d rather tolerate as I grew more interested in the writing. Whilst the game does take huge inspirations from tougher platformers, it doesn’t aspire to match their level of difficulty. 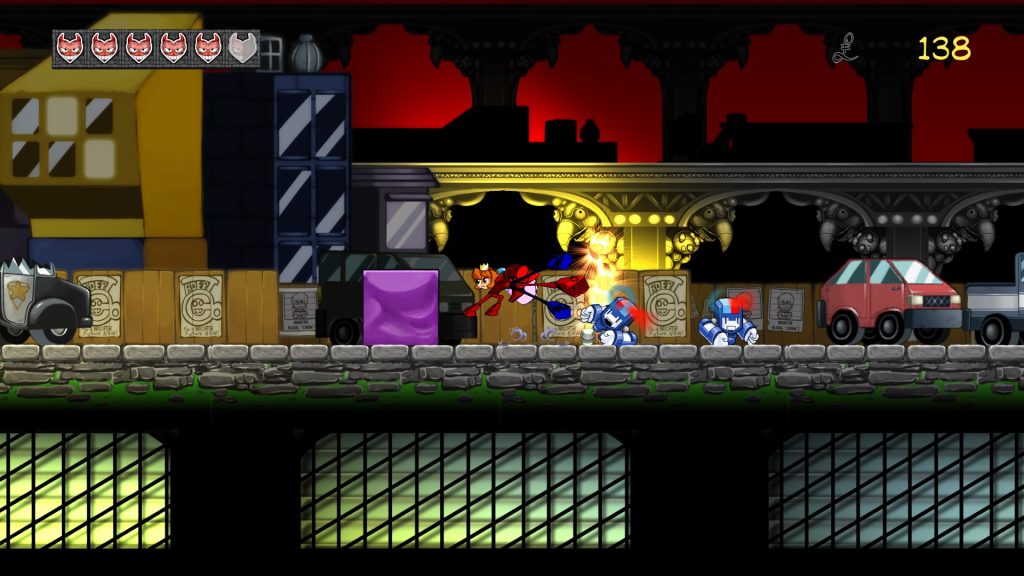 It’s rudimentary in how it controls. You have a jump button, can punch and can hurl grenades at ranged enemies. As you traverse the varied levels, you collect lucre which acts as your main currency. You can return to your ship and spend this money on upgrading your abilities. This seems quite essential as you bolster your health, ammo and can gain useful enhancements like triple punches and rockets. They improve your effectiveness in battle and helps smooth out some of the game’s rougher obstacles.

Most stages culminate or incorporate boss fights into them and these are interesting in their design. You usually take control of Crow’s many weapons of destruction against an assortment of heroes. The challenge of these is a little inconsistent with some fairing a lot easier than others. It does offer the neat twist of putting you on the other side of some well-known scenarios but some fights can be over quickly whilst others feel needlessly drawn out and scrappy. It gives the developers a chance to have some fun with the format which I applaud. They might not always work but they’re at least worth seeing. 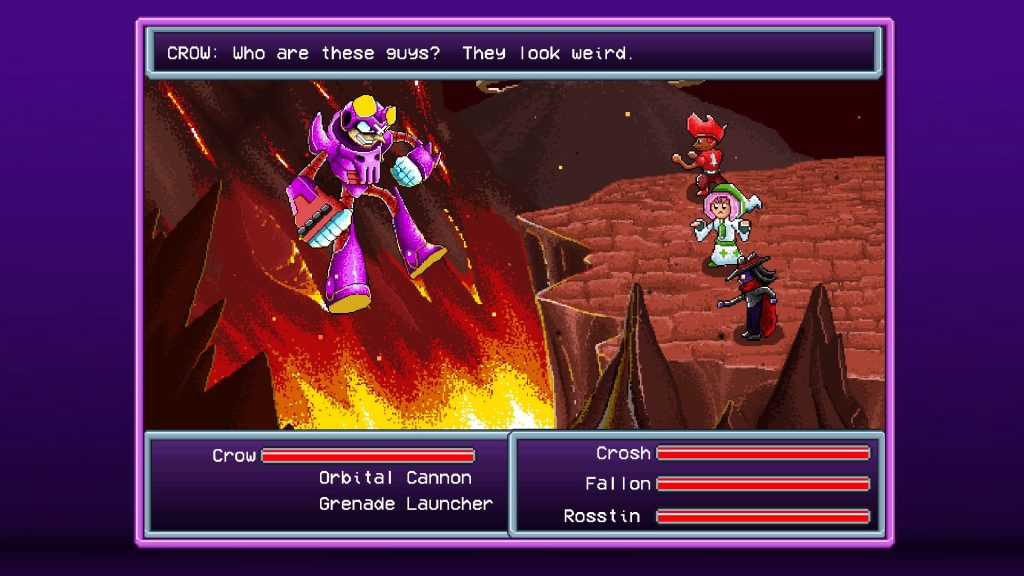 Make no mistake, Nefarious is written well. It’s a premise that could wear thin but there’s a well-managed tone throughout Nefarious that holds firm. Crow’s appropriate cartoon villainy is played nicely and the banter between him, his crew and the captive princesses paints a charming picture. There’s a lot of character to it and the game likes to toy with expectations regularly. Given how open they are with their inspiration, it’s nice to see this subverted and the campaign goes off in some direction you genuinely are sidelined by. It manages to feel cohesive, too with the writing propelling you through a game that’ll probably take you a handful of hours. It’s just long enough and doesn’t outstay its welcome.

Visually, the game can’t escape the kickstarter origins. It’s colourful and there’s some decent animation but it’s all fairly primitive. I’d hate to be reductive but it does look like a game you’d play in your browser a decade ago. Still, it’s not too noisy and you can easily see where your next platform or enemy is. Even when the game does throw down the gauntlet, you know where the danger is coming from and can try to avoid it. 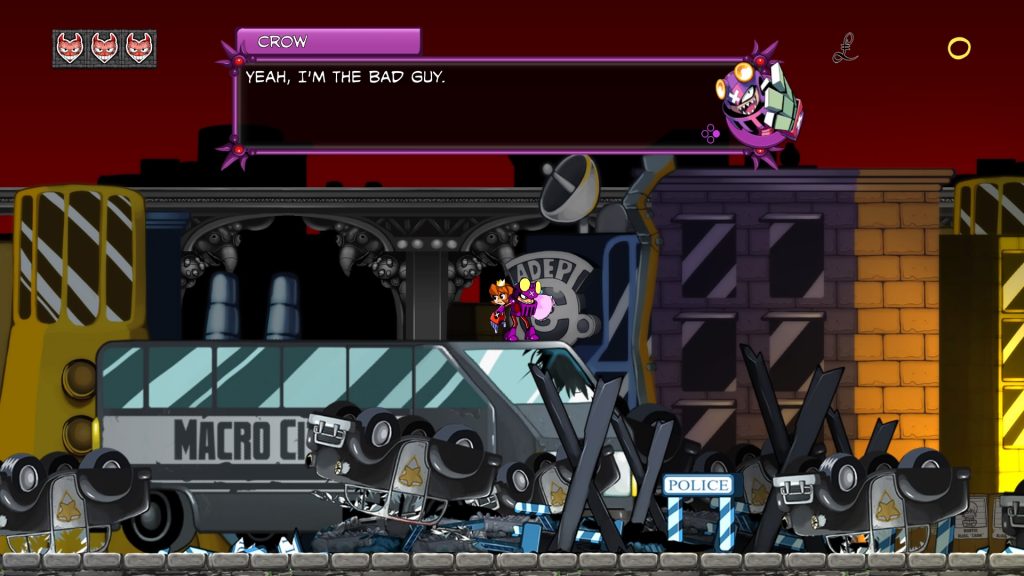 Music is surprisingly catchy and charming. I’ve had a couple of level tracks jammed in my ears for days now and it does at least make some of the repetition of failure not feel so monotonous. There’s some very, very limited voice acting which is probably due to budget constraints. With how this game looks, sounds and is written, you can see where they priorities time and effort. And, to be honest, they made the right call.

Nefarious could’ve wound up going so many ways. It could’ve stuck closely to the platforming that inspired it and wound up being judged against it. Instead, Starblade opt for something lighter in tone and execution and, whilst it does have moments of frustration, there’s a story with some sharp dialogue and a pace that just about manages to keep me onboard.

Nefarious
6 Overall
Pros
+ Smart, funny writing.
+ A varied campaign that goes places you don't expect.
+ Enjoyable, catchy music.
+ Well-paced and doesn't outstay its welcome.
Cons
- Combat is a little bland.
- The platforming doesn't stand up to scrutiny in the latter stages.
- Some bosses can feel like frustrating duds.
- Visually uninspiring.
Summary
Despite the shortcomings in Nefarious' platforming and combat, there's a great likeability to its tone and writing. The controls aren't particularly precise and you'll need some character upgrades just to tolerate some of the harder challenges. If you have the patience, there's an interesting experience with plenty of charm here.