Despite being a sport in decline, the NASCAR Heat series appears to be picking up pace as a competent simulation series dedicated to America’s favourite oval racing championship. Building on last year’s effort, Monster Games are hoping NASCAR Heat 4 can keep the momentum going. 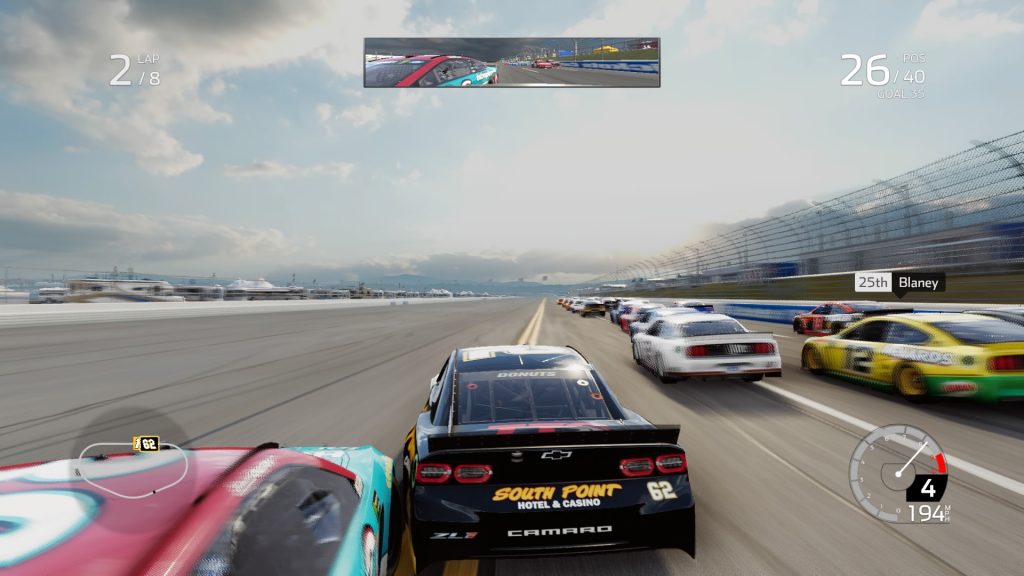 NASCAR Heat 4‘s handling doesn’t feel drastically different from last year. You spend a lot of your time hitting the rev limiter and looking to draft your way through ovals to gain results and the handling feels consistent and responsive enough. Vibration indicates when you’re in a strong tow and recovering from contact is doable, providing you’re not tipped into a spin. The cars feel weighty and their powerful engines translate well to the game. On dirt, slides are easy to instigate and you can really feel the front tires dig into the surface. Race fuel predictably gives the car more mass and a car in qualifying trim always feels a lot quicker.

Racing still remains wonderfully competitive as you look to slot in lanes, spot gaps and try to figure out just where to place yourself during turns. Oval racing feels like such an opportunist sport and it’s translated well to the screen here. By default, losing control takes a little bit more effort and the model feels forgiving whilst providing your options to add to the challenge.

For those wanting a more authentic simulation experience, difficulty and assists are customisable. You have standard casual, normal and expert presets but these can be tweaked within these boundaries to provide something a lot more tuned to your skill level. Car setups can be tweaked as well, providing you’re on a custom or expert difficulty level. From the garage, these can be tinkered with. 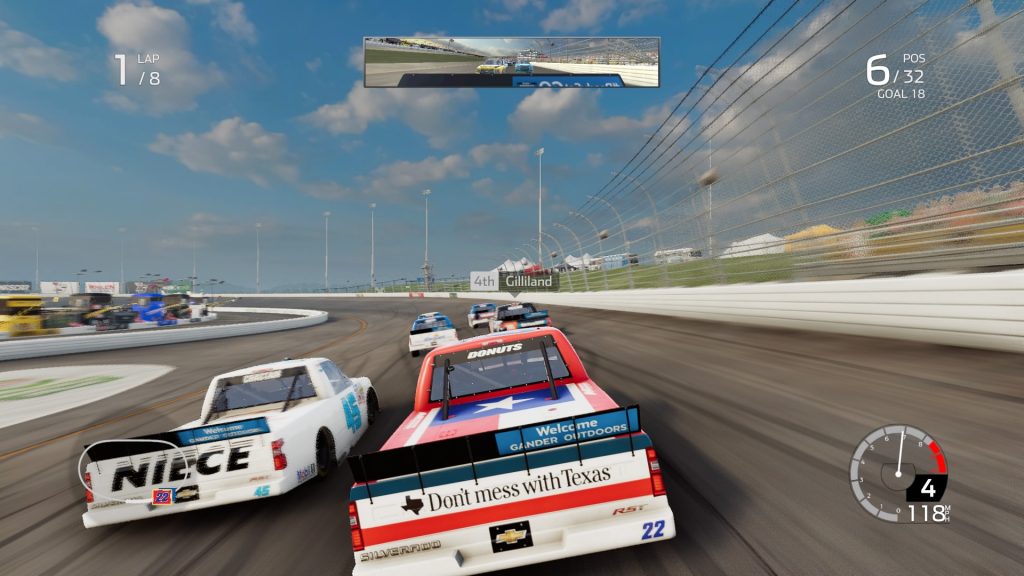 NASCAR Heat 4‘s career mode remains almost identical but you can now choose your starting point. There’s four series to pick and, if one of them doesn’t take your fancy, you can skip straight to the big leagues. The social media aspect remains as charming as ever and still manages to impact the racing. I’ve found myself becoming something of a cleaner racer and, as a consequence, a chunk of the grid are happy to act as draft partners and give me space in the pack. Enemies will bump and run and it’s nice to see the pre-race presentation give you an idea of who will help and hinder your race.

You’re still working your way from the fictional dirt track to the hallowed ovals, looking to secure contracts en route. Sponsors can be kept happy chasing results and other teams will cautiously approach you during and in between seasons for drives. There’s a lot to do but, if you’re familiar with last season’s effort, the structure won’t throw anything new at you.

That’s not to say it isn’t still engrossing. I love making friends across the grid, climbing the ladder and seeing the actual racers congratulate you in hastily shot phone footage. Gone are the more produced introductory videos in favour for more drivers giving up their time to shoot these brief videos. As a result, it doesn’t feel like a compromise.

Of course, the option is still there to run your own car or team as the money you’ve earned from racing transforms a fledgling outfit. I rarely tend to dabble in this but the simple management aspects from crew hire and parts does give your funds some kind of meaning. It can help you feel a bit more involved than just driving and setting the car up each week. 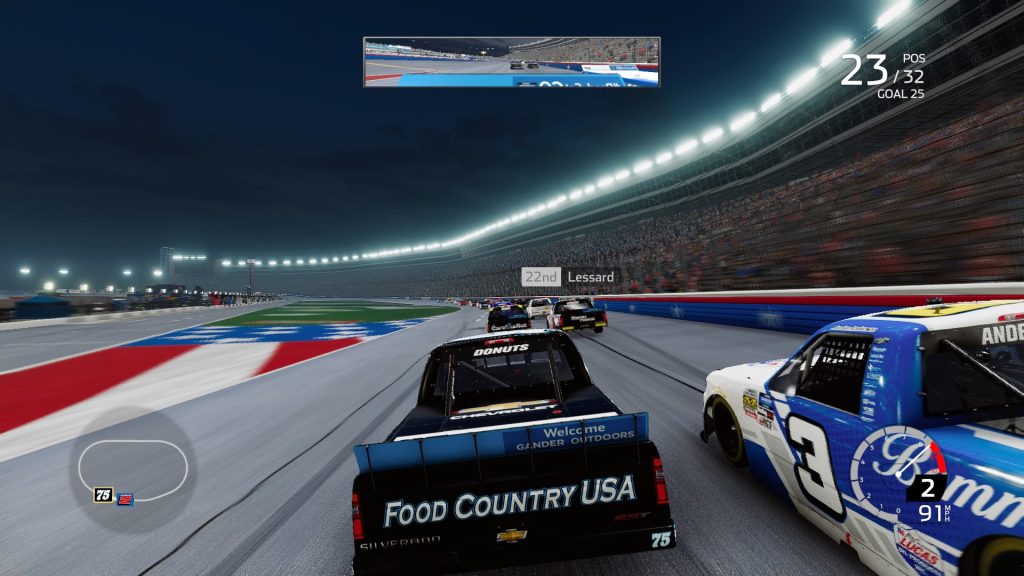 Visuals remain appealing. Car models are impeccably rendered and the tracks themselves are shown a great deal of care. Each has their own sense of charm and character with no two ovals looking alike. Some hold a carnival atmosphere, the extreme banking of Talladega is shown in full effect and the short tracks really limit your ability to draft past trouble.

A new touch are day to night transitions which appear during races. This game has incredible skies so seeing time pass during a race is wonderful to see. Track surfaces and surroundings remain incredibly detailed and active. The bumps of the tarmac are translated nicely by your vehicle’s suspension and, in general, the presentation is clean and easy across the board. It’s a shame it still hitches up from time to time. It’s not struggling to maintain a frame-rate but, there’s intermittent instances of the game momentarily hitching. It’s distracting but not race destroying.

The engines of the vehicles retain their roar and the dirt racers sound appropriately rugged. Your spotter will warn you of cars coming up on you and encourages you throughout your races. He’s still cheery and informative and, even if you can’t see them, you can certainly hear company.

The remaining modes feel fairly predictable. You can have your usual championships, single races and practice sessions whilst also diving into a set of pre-made challenges. These are understandably tough and tend to task you with chasing down or holding off a pack to advance. Some of it seems beyond me but those wanting a sterner test could find it here. If nothing else, it can provide some valuable training wheels in the art of drafting. 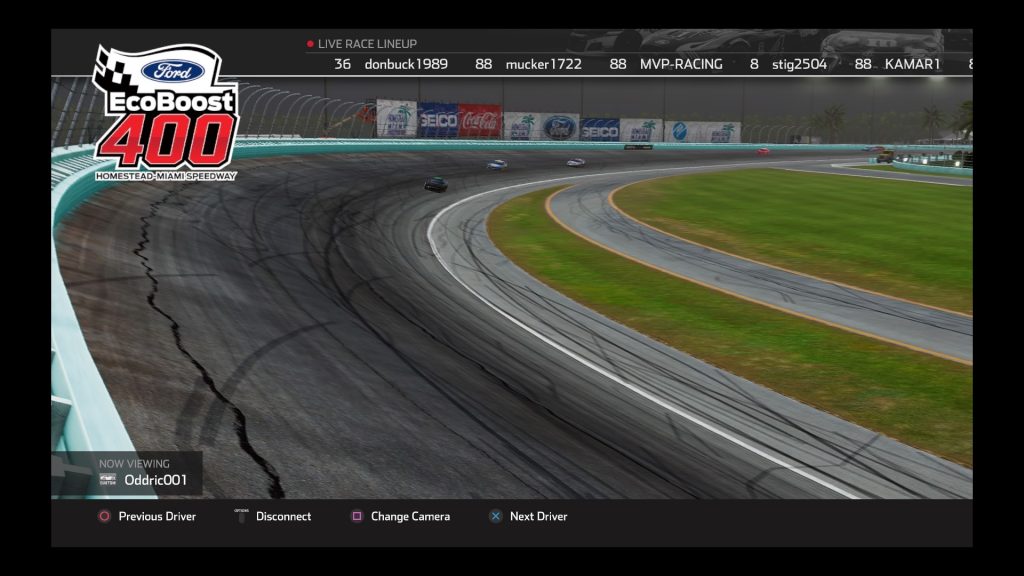 Online’s seen a couple of changes. When setting up your lobbies, you can pause the countdown clock if you wish to make some last-minute changes before hitting the grid. Spectator mode returns which gives you something to watch whilst waiting to join a race already in progress. Net-code seems stable and lobbies are as customisable as you expect. Difficulty, cars and tracks can be picked and limited. For those wanting a more committed experience, the eSport options return for another season.

A couple of smart changes elevate the social aspects of the career mode whilst giving the visuals a chance to shine with the new time of day transitions. There’s nothing radical about NASCAR Heat 4 but it still provides a compelling, customisable racer. I wish the visuals maintained their smoothness but I can live with the small, irregular stutters.

Review 0
7 Overall
Pros
+ Engrossing, close racing.
+ Handling feels planted and consistent.
+ The social aspects of the career are complimented with the addition of draft partners.
+ Day and night cycles give the races a better sense of time passing.
+ Plenty of options to alter assists, difficulty and preferred style of racing.
Cons
- Small stutters happen during races.
- Presentation is clean but is starting to look a little stale.
- Might not be enough new here for people to switch from last year's effort.
Summary
It's not making any sweeping changes but NASCAR Heat 4 manages to make the social aspects of the career more influential. Transitions from night to day compliment the already brilliant visuals, even if the small stutters remain present. Racing online and offline is still competitive, fun and the options make the package feel accessible.