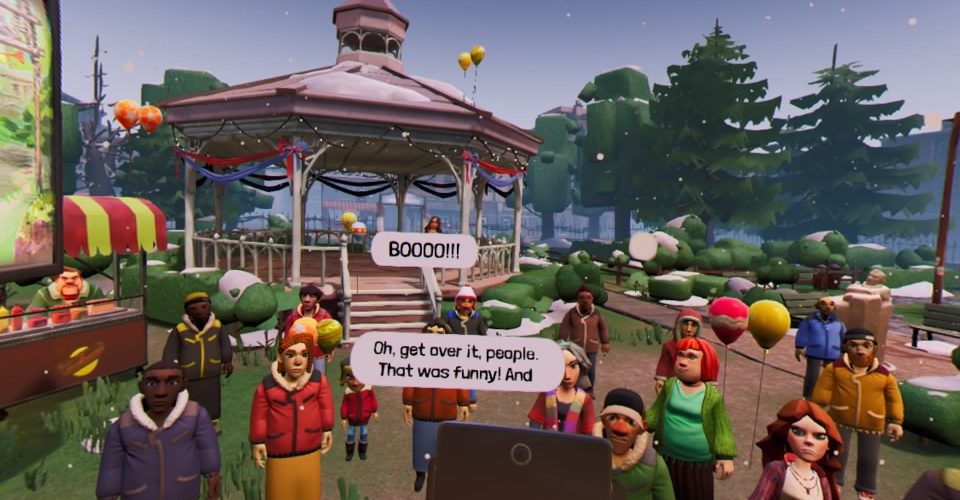 I was once told I looked like a young Bill Murray, so when a VR sequel to the 1993 film Groundhog Day is released who better to review it? Someone who has seen the film more than once a while ago? No, shut up, I’ll do it.

Groundhog Day: Like Father Like Son is new on PSVR and requires two Move controllers. As the title may suggest you play as the son of Bill Murray’s character, Phil Jr. Phil Sr has died, so Phil Jr has joined his family back in Punxsutawney to celebrate the local legend that is his father, an upstanding citizen that everyone loves after the events of the film. Phil Jr is an up and coming vlogger and is only passing through on his way to LA to meet with a social media giant to sign with them and increase his audience massively. He only has to last one day before he can move on with his life, but anyone with any knowledge of the film knows that’s not going to happen… 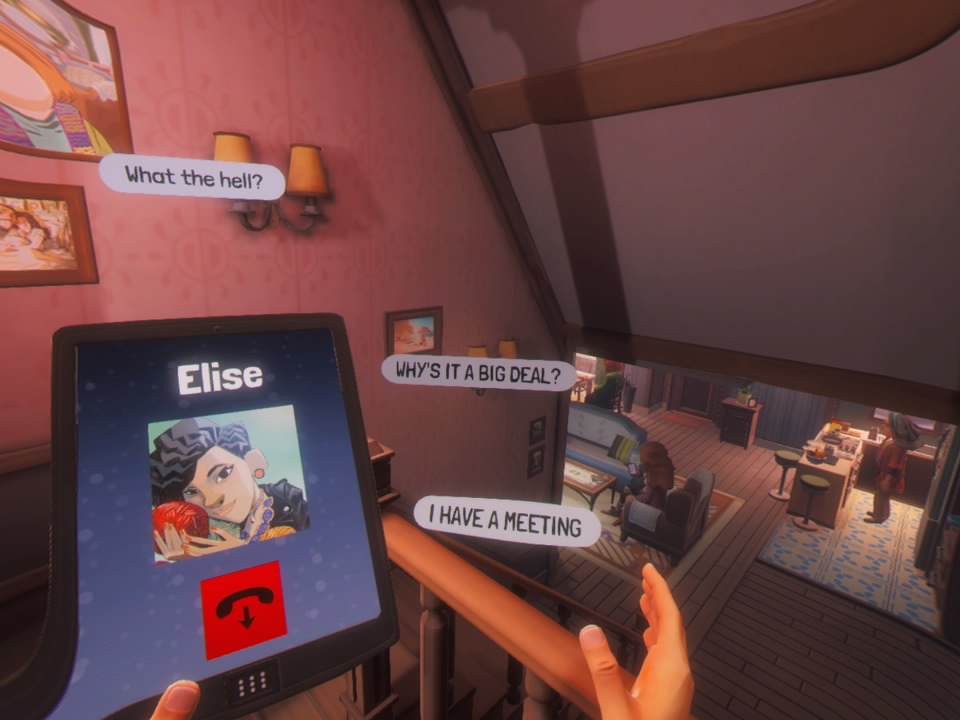 Things quickly start to go poorly, with Phil Jr’s niece crashing the family car through the house putting her in hospital. As such the majority of the family can’t attend the ceremony and so it’s cancelled. Phil Jr is still going to leave but gets snowed in and can’t catch his plane and things could not have gone much worse. Then Phil Jr wakes up the next morning, but it’s not the next morning, it’s the same morning again. And again. And again. You probably saw that coming.

Much like the film Phil Jr has to grow as a person and help those around him rather than helping himself in order to hopefully break the loop and finally wake up the following morning and move on with his life. He does this by interacting with people over and over, learning little titbits of information and completing rather simple puzzles and mini-games. 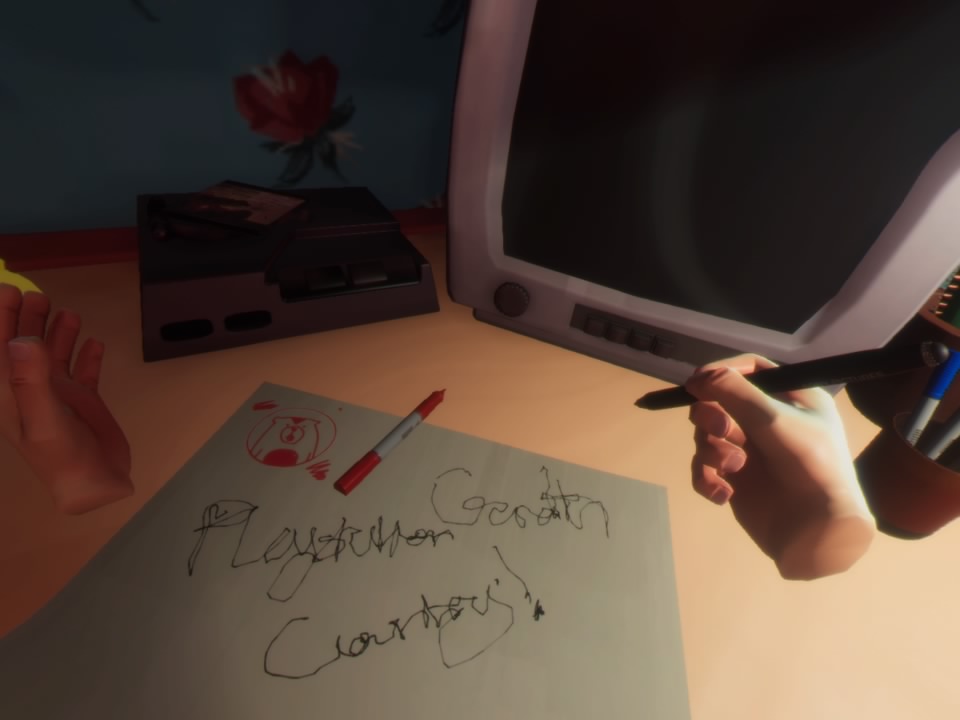 Upon waking up you’ll see that you can only teleport to certain spots in the room, there is no free movement and you can’t choose specific areas to teleport to. In these positions are things you can interact with and Phil Jr will often comment on them. There are books and audio cassette tapes to look at, a basketball net over a bin with an infinite supply of balled up paper and a pen and paper on the desk. Here I was very impressed with the interactivity as I was able to draw and write on the paper with surprising accuracy with the Move controller. Once you’ve played around enough you can head downstairs to deal with your family.

Your brother and his daughter are having a fight and his twins are playing outside in the snow. Your mother is part talking to you and part on the phone with Ned who is organising the ceremony. Amongst this chaos you can do what you like in the predetermined positions. If someone talks to you you may get a choice of responses but know that on your first time through most answers aren’t going to be nice. Amusing sometimes, but Phil Jr is a self-centred human being and so you will not get pleasant or ‘correct’ responses until he has seen the error of his ways. 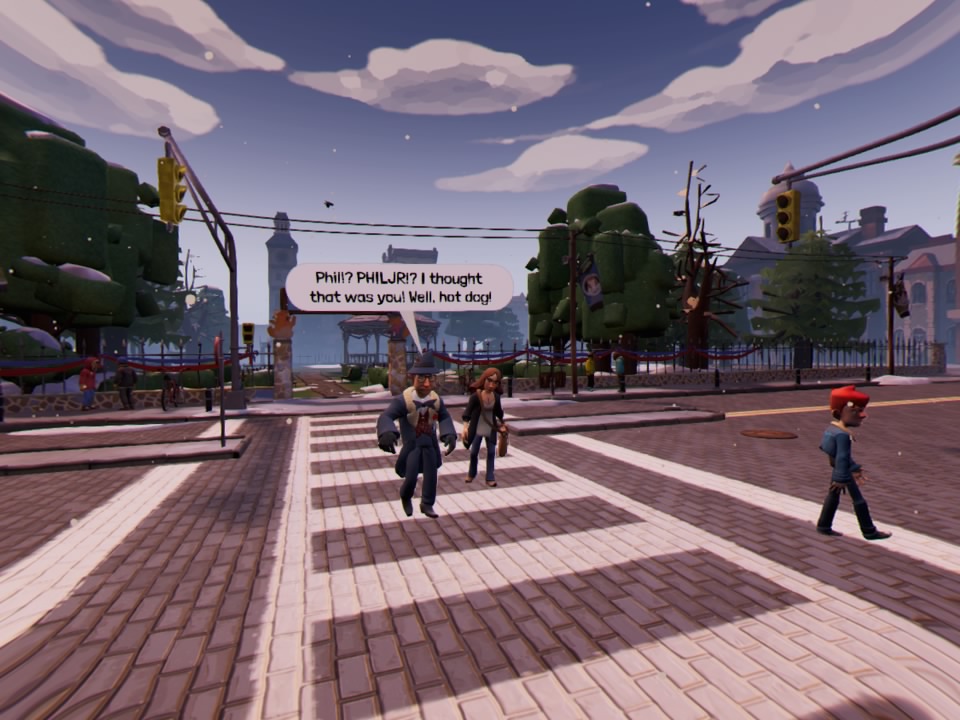 You need to stop the daughter smashing the car through the side of the house so as you replay the first scene over and over you’ll see the chain of events that cause this to happen and must figure out how to stop them from occurring. Just as an example, the daughter is annoyed that there is no vegan option for breakfast, so maybe you can help her out with that using the power of VR and motion controls. There are other optional things you can mess around with of course but ideally after a couple of repetitions you’ll have made everyone happy and you can move onto the ceremony. Once you’ve completed a puzzle the game usually gives you a shortcut to happiness so you don’t have to repeat the same actions over and over unless you want to, which is nice.

Once you’ve moved onto another scene you’ll repeat the process, gathering information which may help in a previously cleared scenario as well as the one you’re in. Upon finishing a section you’ll be asked if you want to repeat it or continue on, so if you know you can improve the situation further then you don’t need to play your way through to that part again. Very smart design. During these interludes you’ll see Twitter posts by Phil Jr which differ depending on how well you’re doing, with the responses from his followers. It adds a little more context to your actions and fills out Phil Jr’s background a little more. The load times at the end of each section are a little on the long side however. 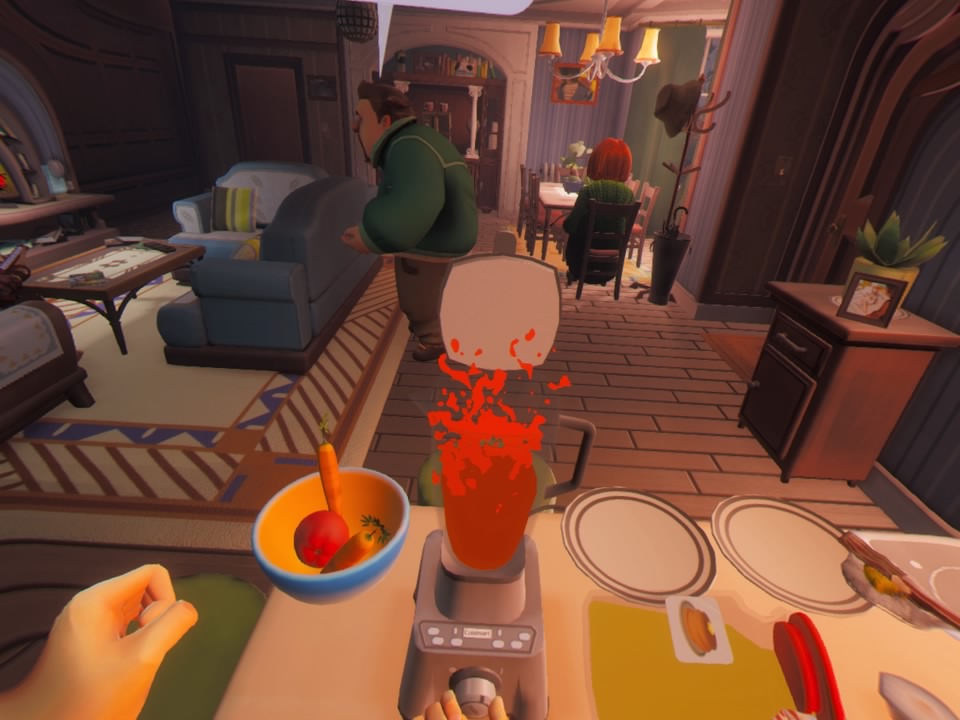 There are hidden collectibles in each area and plenty of optional trophies for doing specific things or completing the mini-games well, like playing the guitar or a choreographed dance. To get through to the end of the game can take over five hours and the way scenarios evolve and open up is quite interesting. The intrinsic repetition can cause a slight problem, especially with the odd mini-game you have to repeat so that Phil Jr becomes better at it, but as long as you’re making progress then the game doesn’t stall.

The presentation is pretty good overall. The voice acting is decent across the board and Phil Jr is suitably dislikable, but often amusing with it, although f-bombs are dropped at a weirdly constant rate for a sequel to a PG movie. The character graphics use a stylised look but I’ve seen far worse though the animation leaves a lot to be desired. Sometimes their movement can be a little clunky as they find their mark but it’s easily forgiven due to the cartoony visuals. The Move controllers have their good and bad moments, with the impressive pen usage at the beginning being accompanied by plenty of awkward moments. If you’re short on space then you may struggle as I had to adjust my set up at times to be able to reach low enough, high enough or get a suitable range of movement. There was one mini-game that had me begging for the release of the next gen PSVR with new controllers, but I was able to finish the game without too many problems. 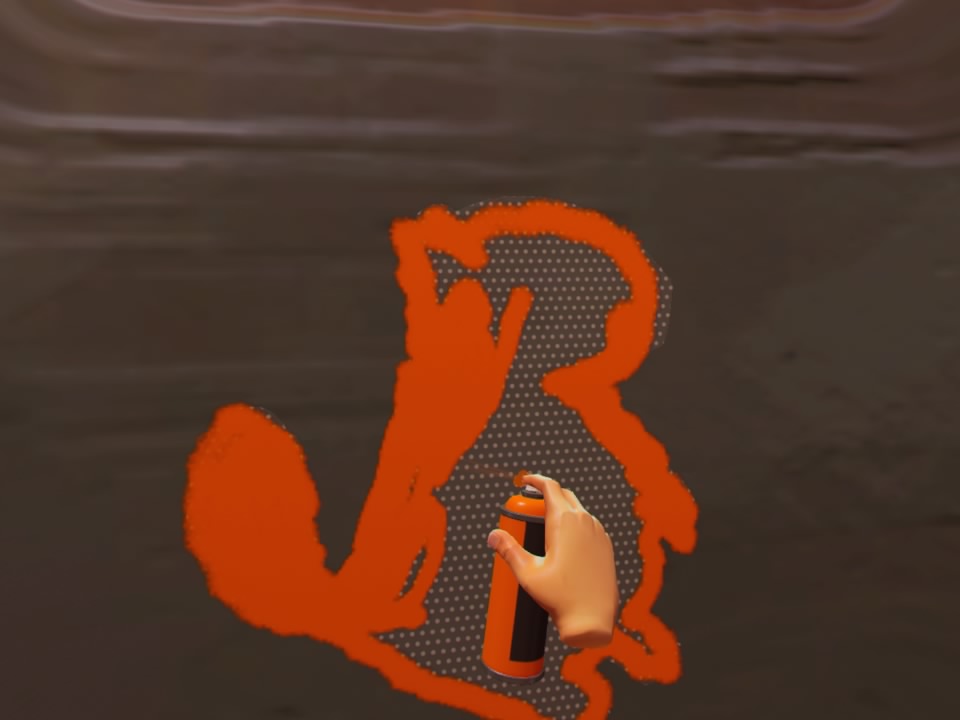 Groundhog Day: Like Father Like Son is an enjoyable title for fans of the film and those that like a stronger story in their games. You get plenty of the fun VR shenanigans with the Move controllers but the story is what drags you along and determines what you can and can’t do. It is, obviously, repetitious by nature with certain activities being more annoying than others in that respect but whilst a decent length, the game doesn’t outstay its welcome either. Once you’ve beaten it and done all the optional stuff then I’m not sure there’s much replayability which for the price could be an issue but it’s worth strapping on the headset for again.

Groundhog Day: Like Father Like Son
7 Overall
Pros
+ An interesting premise
+ Well presented
+ Some fun VR shenanigans to be had
+ Lots of optional trophies to play around with
Cons
- Repetition can be a little much
- Move controllers can misbehave
- Some long load times
Summary
Groundhog Day: Like Father Like Son is an enjoyable return to Punxsutawney in game form. The repetition is both an interesting concept and a bit of a pain, but you will appreciate it, and the VR shenanigans, as the scenarios develop.