I can’t say it’s often we get a game to review that’s been out since May. Monstrum has been out even longer on the PC but a sequel is on the way. Ahead of that impending release, the original has been sent our way from Junkfish. A very small package, there appears to be some clever tricks under the hood in this simple survival horror. 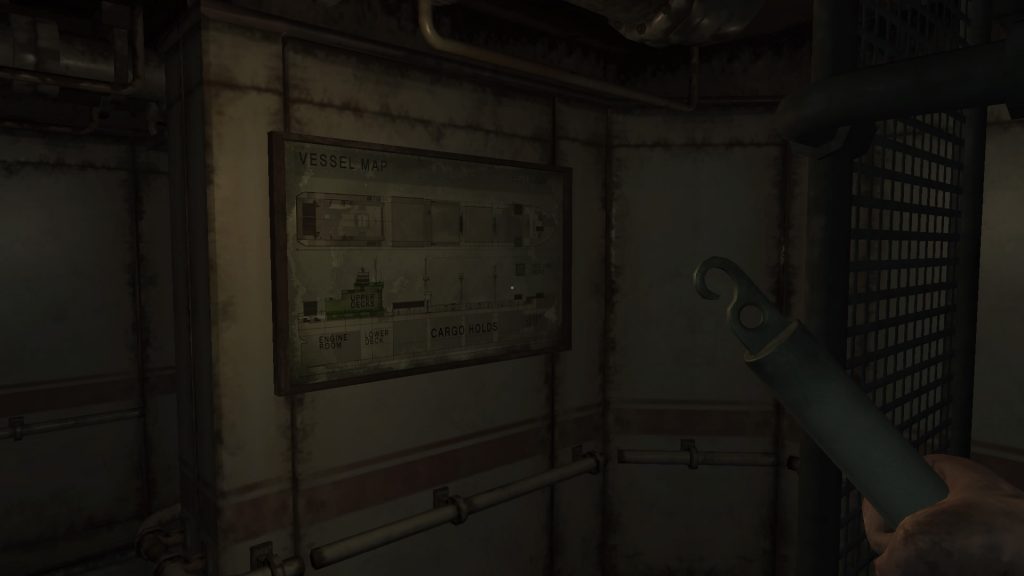 I wish I could tell you more about the story of Monstrum but it’s quite hard to piece together. Audio logs and notes are scattered about the cargo ship and the only inhabitants on that vessel are now you and a monster. It would be very, very nice to have been given more to go on. A little more on the premise or even some guidance. As it is, Monstrum is a very slight game when it comes to narrative.

The gameplay is also kept fairly simple. The easiest comparison I can make is 3D Monster Maze but on a bigger scale. With just a monster for company, you have to cobble together an escape plan by finding items and a means of departure. All whilst a monster is on your trail. It’s a simple concept that seems to have been executed well by Junkfish.

On the surface, there isn’t much too it beyond the cat and mouse gameplay. You are, however, given tools for defence and an abundance of areas to hide from your pursuer. Each map is randomly generated and death is permanent so memory is not something you can rely on. Some aspects of the geography remain constant. The escape routes, for example, will always be in the same spot. They’ll always require the same items and the ship’s layout will always feature six decks and a cargo hold. 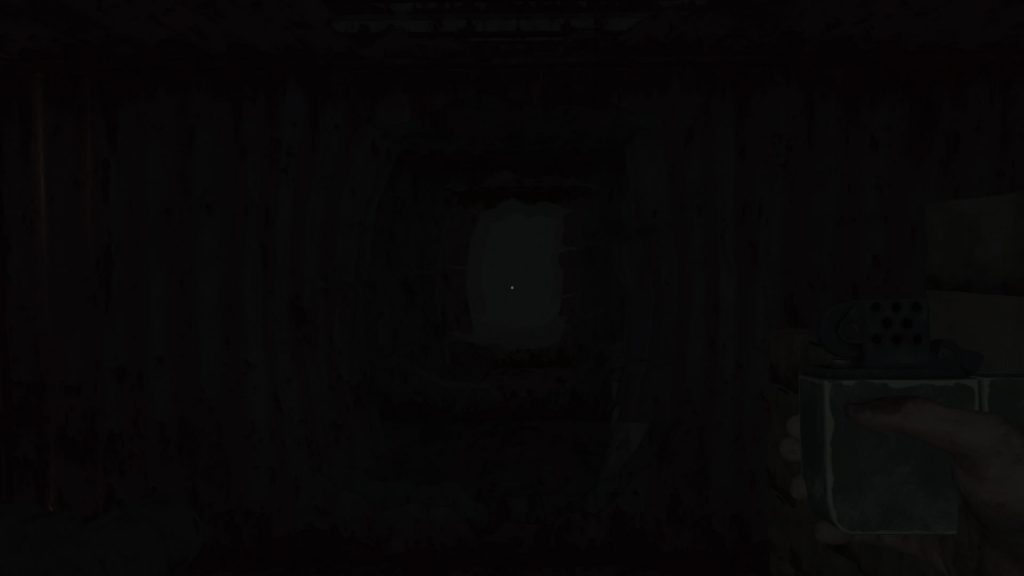 Navigating the ship can feel confusing. There’s not many rooms to check on each deck but the procedural nature of the environment leads to a feeling of never truly having your bearings. It helps to put you on edge which is one of Monstrum‘s greatest strengths. Items are easily spotted against the darkness and, with a limited inventory, you have to decide what to carry and leave behind. Nothing beyond the escape items feel entirely necessary but radios and throwables can help provide distractions against the monsters.

These foes come in three varieties. The Brute is the fastest and his size is intimidating. His vision is clearly his greatest aspect and, whilst he is the fastest monster, you can outrun all of them. He telegraphs his presence with heavy footsteps and an ominous growl. The Hunter can also wander but she prefers to wait. She can spring herself from vents and spawn where her eggs are laid. It’s easy to see where the inspiration lies but I suspect this is where an enemy encounter might feel unfair. I’ve not had her teleport but her nature implies that she could spring up behind you at any point. 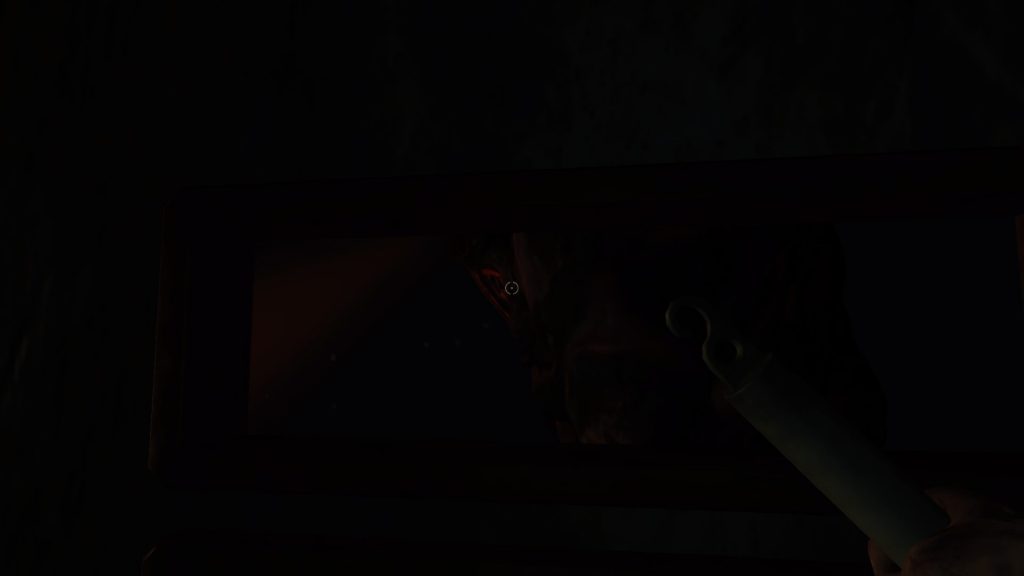 The final member of the trio is the Fiend who operates as a more supernatural being. He produces no footsteps, preferring to hover. As such, you’re looking around for flickering lights or humming that usually signify he’s nearby. Whilst I feel all their designs are a little goofy, they all provide trick adversaries. I’m not sure who I prefer to face at this point. The Brute gives you a lot more warning and the rules he plays by are clear to see with his florescent vision cone and plodding footsteps. I feel I’ve done the best against The Fiend. His movement is very slow so escaping his clutches feels the easiest.

Taking on these monsters does feel exhilarating. There’s no guarantee when and where they’ll spawn so there’s a great sense of anticipation in the early stages. Listening out for footsteps or looking for clues whilst also searching for items can make for a tense experience. The sound direction plays a large part in that.

There’s no musical score so you have the distinguish the rocking and knocking of the ship from an enemy’s movements. It really makes you pay attention and I find myself stopping from time to time just to listen out for footsteps other than my own. I don’t think the monsters are especially tuned to yours so there’s no real need to crawl and tiptoe around. Hiding spots are plentiful and your ability to outrun all of them allows you to beat a hasty retreat. My failures have all felt down to my poor judgement, rather than being conned by some rubber-banded AI.

As much as I’ve enjoyed Monstrum, there’s been plenty of rough edges. The most obvious of which are the visuals. Texture work just looks muddied and rushed. There’s a real lack of polish and, whilst some of the lighting is complimentary, textures pop into existence. A budget product from a small team, the environments feel very prefab and can run together. It’s functional at best but I feel like the sound delivers most of the atmosphere. 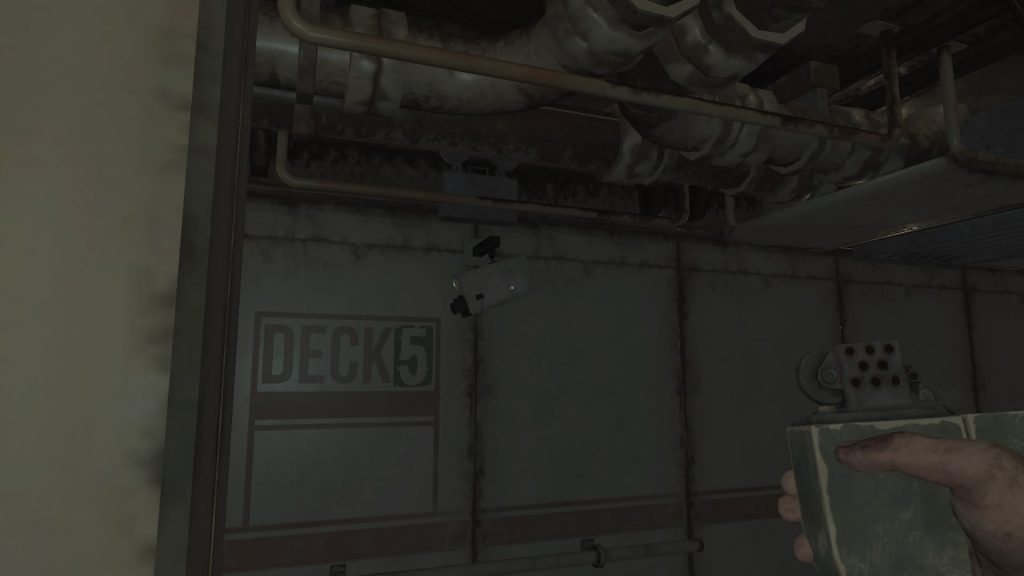 I also wish the game took time to explain itself more. There’s not a lot to get with Monstrum but you’re dumped on the ship with very little pretence and only a note for guidance. Resources online have helped me grasp the monster behaviours, how to best use items and walkthroughs on how to trigger each escape. It can be very off-putting when, as a new player, you’re given such a cold opening.

Monstrum‘s a very slim package that does offer some interesting depth. It’s a shame you have to really engage with wikis and websites to really piece together the rules of engagement. You can tell it was made on a small budget with a small team but the hide and seek, cat and mouse nature of the game has been well realised. It would be nice to see this built upon but it seems the sequel’s going in a more multiplayer-focused direction.

Monstrum
6 Overall
Pros
+ A fair game of cat and mouse.
+ Outstanding sound design.
+ The procedural nature gives each run a different feel.
+ Very good at building tension and apprehension.
Cons
- Rough, cheap visuals.
- Does very little to introduce and teach new players.
- Whatever narrative there is poorly presented.
- A small package that doesn't quite justify the pricetag.
Summary
Monstrum has a rough start and it does not do well to educate new players. There's a real lack of explanation when it comes to enemy behaviours and objectives. Once I'd come to terms with it, I found a game that was surprisingly fair and accomplished in the art of building tension. It's not a great game to look at but there's fantastic sound design at work that does build apprehension well. As basic as it is, there's a decent thrill here, however short it lasts.