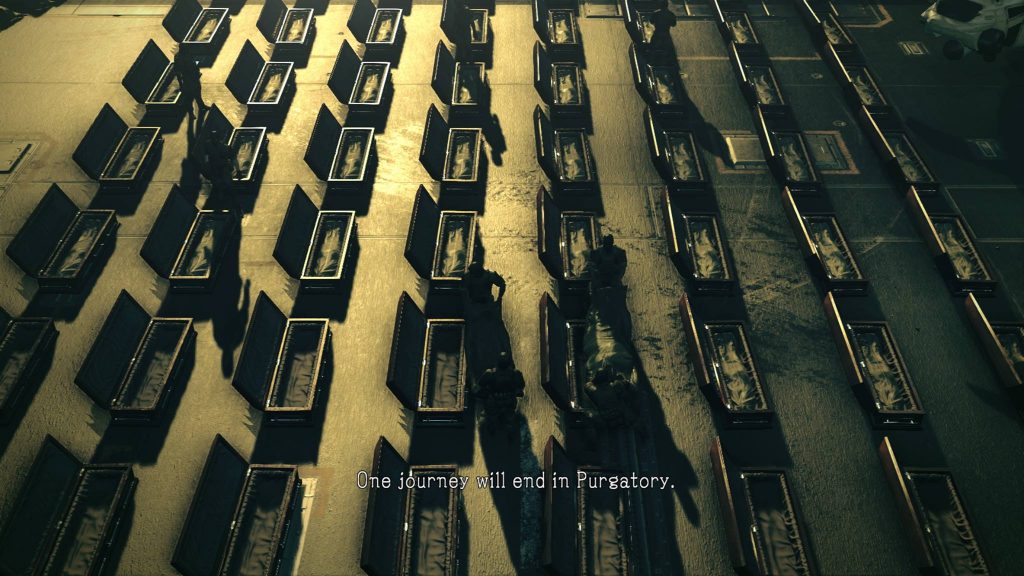 As soon as Metal Gear Survive was announced, there was blood in the water. The departure of Hideo Kojima from the franchise left a bad taste in the mouths of fans and Konami’s idea of following up the critically acclaimed stealth franchise with a Zombie led survival title certainly did not help matters. Survive has a lot to prove to get over these trappings and unfortunately, the game fails to do this to any meaningful or lasting degree.

You play as a rank and file soldier from Big Boss’s mercenary group. Starting from the end of Metal Gear Solid V with the fall of mother base, both you and the base are warped via wormhole into a desert-like realm called Dite. Beyond the lavish cutscene with typical MGS flair, the story is quite anaemic from this point. The general idea is that you must survive the landscape around you while collecting Kuban energy to overcome the horrors of the world you now inhabit and to reduce the spread of interdimensional viral outbreaks from happening in the real world. 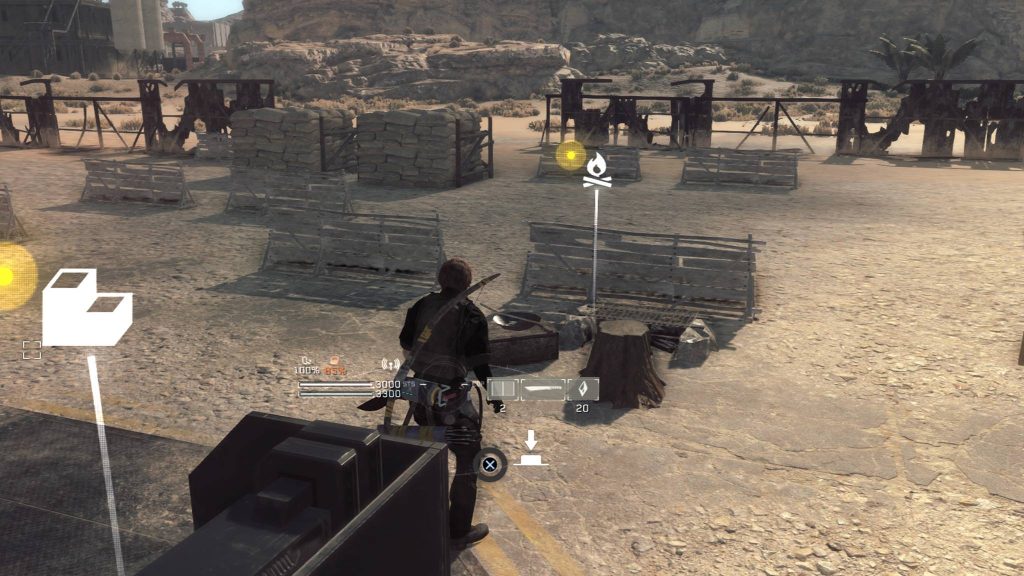 This is a suitable setup for a survival title, even if the inclusion of a wormhole in such a serious and considered world as MGS is baffling. However, any sort of intrigue that the opening provides gets diminished when you encounter the way that the story is presented later. Instead of continuing the impressive cutscenes you are greeted with flat conversations with NPC’s, delivered by text and still imagery that often interrupts gameplay to explain mechanics or overly flowery dialogue that amounts to little more than “go there and do this.” You could argue that a story in a survival game is relatively unimportant, however story is very important to a Metal Gear game and this flat delivery betrays the usual sense of charm and personality that the series is known for.

Unfortunately, Metal Gear Survive struggles with the gameplay aspect also. It suffers from the trappings of the survival genre, stripping back the freedom filled movement and exploration from Metal Gear Solid V and turning it into a series of bars that govern hunger, thirst and oxygen that limits just about everything you do. You cannot get far in the game without sating these bars and so you must constantly forage for supplies, otherwise you run the risk of an untimely death and a hefty chunk of progress lost during a mission. To put this into perspective, your home point in Survive is the newly crowned mother base. Every mission starts from here and you must run from here to your mission, if you die at any point or fail to rescue someone in time before the mission is through, you start from here again and must run all the way back. Considering the game plays at a snail pace due to sprint conservation and thirst, this can turn even the simplest missions into laborious time sinks that reward little more than a few lines of dialogue and some materials for your base. 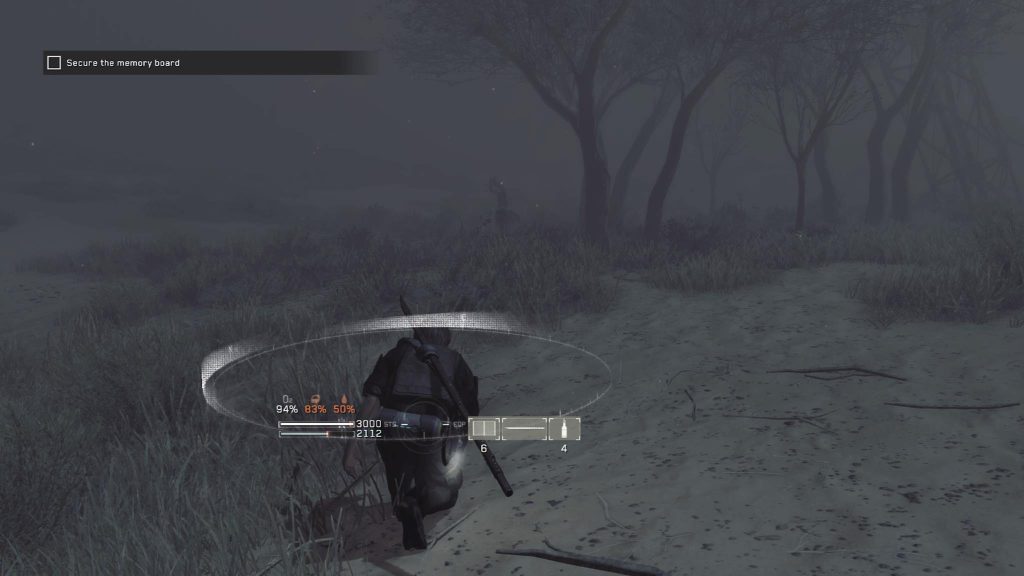 Of course, there are ways around the previous grumbles when you get far enough in the game. For example, you can revive yourself at the location of death if you have a special pill, get around faster with a vehicle that completely removes the challenge of a fight and supplies become easier to manage when you build farms at your base. However, it takes a long time to meet the standards in game that allow these, making the early game far more laborious than it needs to be.

Combat is another bugbear. It is dreadfully simplistic with the zombie enemies. For the most part in the early stages you will be carrying melee weapons only. These are only capable of taking down zombies one by one. To get around this limitation you can place down fences for a quick fortification that keeps the enemies at bay while you poke at them from relative safety. It quickly becomes apparent that the zombies themselves are pretty dim-witted and will focus you head on despite having an easier time if they simply walked around the obstacle, for the most part also they are not able to climb surfaces, allowing you to whittle down their health from an elevated position unscathed. The enemies are only really a threat if you allow them to gang up on you in a confined space or if you allow your oxygen bar in dust areas get too low. 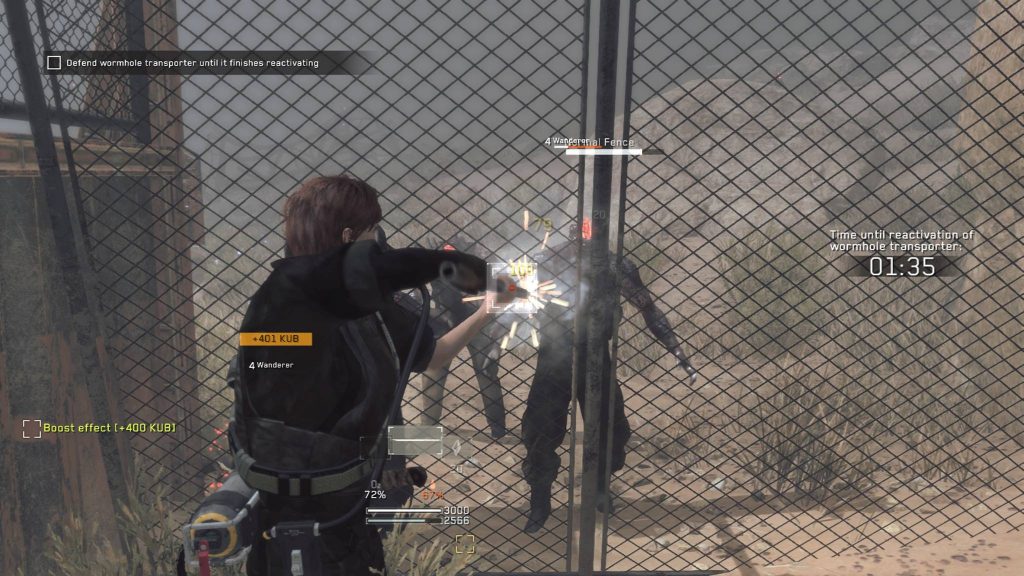 One of the more interesting aspects of Survive is in the previously touched upon base building mechanics. As you progress through the story you can rescue and recruit staff that can man certain stages of your base while you are away. In addition, materials you find around the world can be used to fortify your base against the wasteland inhabitants. Constructing and improving your base is integral to success in Survive and gives purpose to the NPC’s you encounter as you put them to work maintaining your farms and heath stations to create resource factories while you are away. It’s almost a shame though that this side of the game is so necessary to enjoy and play the game, in most other survival titles this aspect could be considered a sideline to enhance your experience, in Survive it is a downright necessity.

Barring the issues above, Metal Gear Survive does look the part, the world of Dite is beautifully derelict and atmospheric but no amount of graphical fidelity or resolution can make up for the fact that the game is just a dull game overall. The tedium of the main campaign could have been improved by the coop experience and I am sure that many would be looking forward to this as a main reason to pick up the game, however unfortunately you cannot play the campaign in this mode. It is instead more of a horde mode game type which equates to yet another missed opportunity in a game filled with them.

Metal Gear Survive
4 Overall
Pros
+ The Fox engine is as versatile and atmospheric as ever
+ The base building mechanics are fun to work with and do well to improve the game somewhat
Cons
- The survival mechanics feel more like plate spinning exercises
- Enemies lack a real sense of threat
- The story is very hard to invest in due to boring dialogue and npc’s
- Just generally quite dull
Summary
Metal Gear Survive replaces the personality and heart of the Metal Gear franchise with plate spinning survival mechanics and a story that simply does not excite. There are some serviceable moments to find within the game, however the sense of tedium unfortunately overpowers the whole experience.