Jade’s Ascension is a twin-stick shooter from Spanish dev team Papas Con Mojo, a small team who were selected for the PlayStation Games Camp in 2019.  This effort is their first PS4 title and is currently an exclusive, although a PC port is due next year.  The game does have some issues though and they all have the same root cause.

The idea behind Jade’s Ascension is that you have to ascend a tower.  You’d assume that you’d play as Jade but that’s not the case, instead you pick from one of six characters who instead take on this task.  The game itself offers no story, so you have to dig into the press release to get the details but even then they are fleeting.  The tower is a trial.  If you can conquer it you’ll become the Emperor of Mojolonia.  To do that you have to get to the 100th floor.

Once you pick your character, you’ll start on floor 1 of the tower.  From here it’s pretty standard stuff.  You move with the left stick and aim/shoot with the right stick (bonus points there, we like it when there’s no fire button in twin-stick shooters).  L1 is used to dodge, R1 uses items and R2 fires off your special ability.  Enemies teleport in randomly and drop coins when you kill them.  Clear the floor and you’ll need to go to the middle of the screen where a lift will take you up to the next floor where more enemies will present themselves. 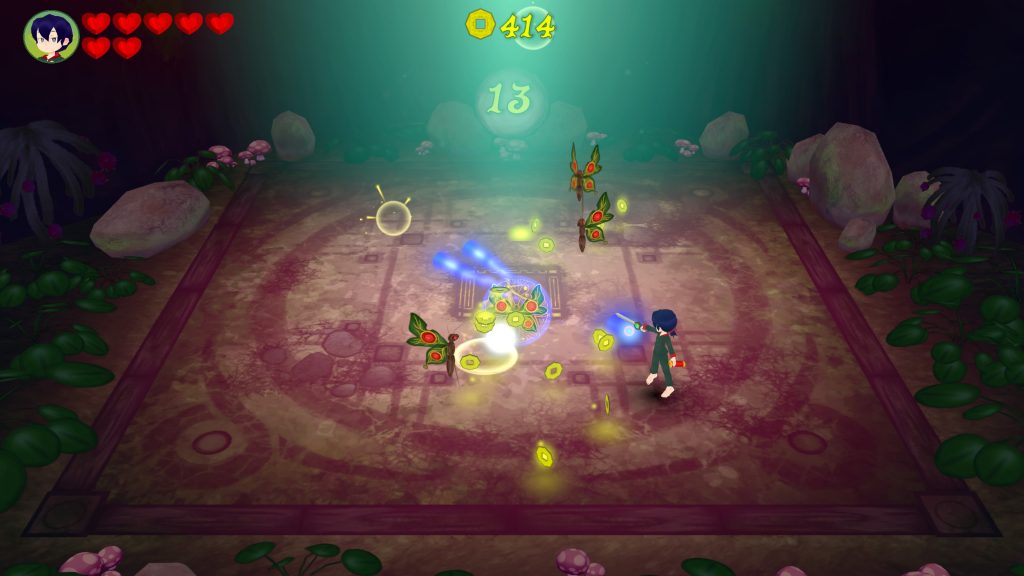 After a few levels a shop will show up where you can buy upgrades for your character and an item to use in combat.  The upgrades let you improve your weapon, its range or add extra lives while the items are turrets, bombs, shields and a spinner trap.  You can only carry one though and they aren’t all that effective.  The only other wrinkle to the basic gameplay is that after twenty levels, a boss will turn up but these are easily defeated.

One thing that the game doesn’t really explain but is probably the most important thing in the game is that there are five towers.  At some shops there will be a portal and these will let you jump to one of the five towers (jade, fire, water, earth and wood).  Jumping to a new tower puts you back to floor one but if you leave and find a portal to come back, you’ll resume where you were.  Why would you want to abandon progress from the tower you are on?  Well, it does let you go back to the easier early stages where you can get coins to improve your firepower, so it is worth doing.

Okay, that’s the basics.  Now lets talk about the problems.  When we said one root cause, we meant something that we see occasionally when reviewing indie games.  Small teams seem to use little or no playtesters and so they get mired in achieving their technical goals without really considering the gameplay and that’s the case here because anyone with objectivity would tell them to fix these things before the game was released.

The least important thing is the story.  Can we not get at least a text screen to give some context?  The press release talks about the game having a  “strong link to the Chinese mythology” but there’s no actual story here.  The six characters are just names and basic character models with no back story at all (despite the press release encouraging you to “discover its main characters” and when you get to level 100, nothing happens apart from you popping a trophy that calls you ‘your majesty’ and the game carries on without any indication that you’ve achieved anything.  No celebration, no coronation. 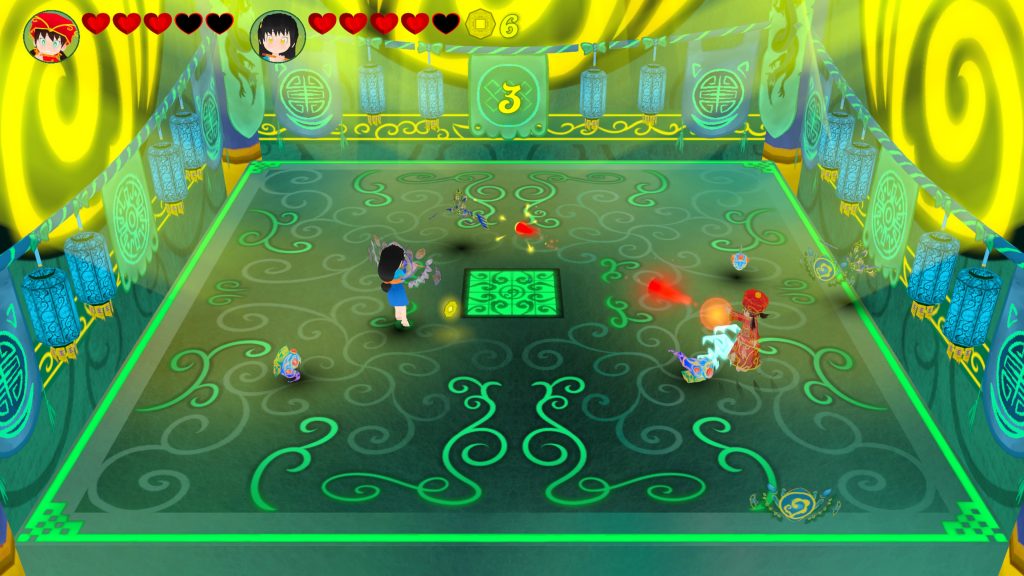 The press release talks about a focus on collaboration but this is nonsense.  It’s good that the game supports four players but that’s local only.  During a lockdown.  In a pandemic.  It’s not like there’s much happening on screen.  I’ve never counted more than 15 enemies at one time so netplay would have been possible.  The release also says “players must coordinate themselves to overcome different rooms” but that’s not really true.  The problems are 1) the game is easily beaten in one player mode, 2) it’s much easier to just stay in a corner than actually run around and so coordinating your attacks just isn’t required, there’s no real strategy here, 3) good luck finding three other people who want to sit down and play such a repetitive and simple game like this.

In relation to that first point, I ended up just turning the game off after 105 levels because I was bored.  The only tricky point is early on when you’re underpowered.  From around floor 7 to 15.  That’s when it can be difficult.  Get past that and then it’s pretty easy to get to the hundredth floor.  I’m reminded of a term used by top Pac-Man players called ‘crossing the desert’ which is how they describe everything from stages 21 to 254 where each level is the same and it just becomes an endurance test.

In co-op the game is unchanged but slightly easier.  The boss battles come earlier but that’s about it.  You can’t revive each other or interact in anyway (you can even occupy the exact same space) so really all it does is increase your attack potential.  It’s not very well designed though because all players share coins but when a player buys an upgrade, only they get it.  So you’ve got to agree who upgrades rather than working to your own progression.  This also highlights another really stupid gameplay decision.  In these sort of games, the main thing is risk versus reward.  In Geometry Wars 2 and 3, enemies dropped things that increased your score multiplier.  Here they drop the coins, so you’d think there’d be a reason to go and get them but no, all coins are automatically collected at the end of a round.  They don’t even disappear after time (although you might think they will because sometimes a graphical glitch causes them to flicker). 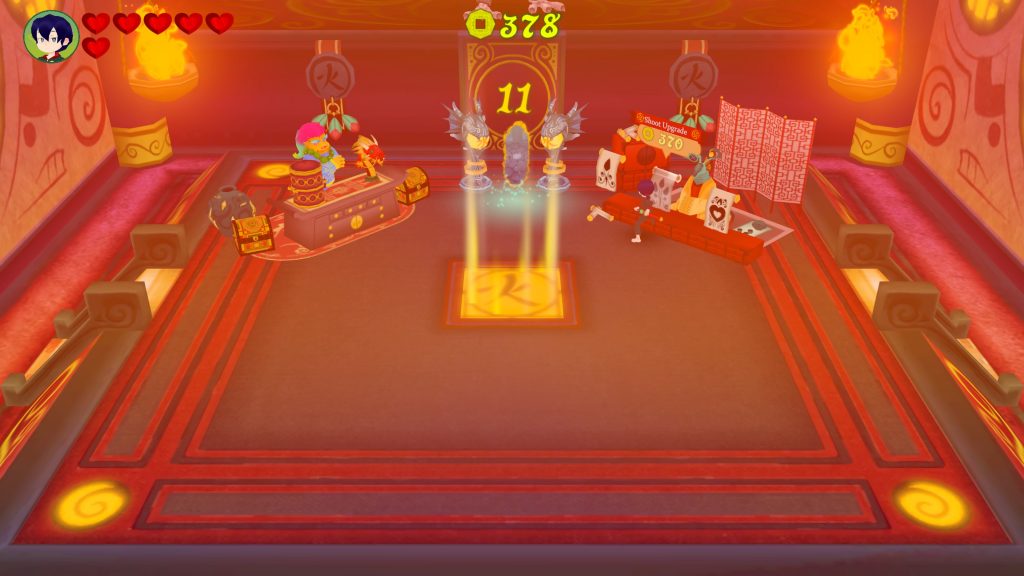 The press release talks about an “arcade game flow” being a selling point but the game feels clunky and unsatisfying.  There’s a few reasons for this.  Firstly, all the characters play exactly the same and that includes them floating slowly when they fire.  Truly flowing twin-stick shooters like Geometry Wars 3 and Stardust Ultra have a feeling where you are on the edge somewhere between control and imminent death.  In contrast Jade’s Ascension is slow and plodding.  But there’s also the way that enemies just disappear when shot, literally disappearing from existence with no death animation, no sound effect, no anything.  Even the game’s sound seems to be actively uninteresting with just an annoying whirring sound when you fire and a scratchy, weak sound effect when your shot hits an enemy.  Different enemies get the same sound effect too so you’ll get that weak snare tap effect whether you shoot a large soldier thing or a floaty butterfly.

Aiming is weird too.  The perspective the game gives you makes it slightly awkward to judge shots but then you also get some enemies that seem to not react to damage (until they suddenly just die) and so the feedback you get from combat is just really limited.

They also talk about a high replay value but that’s bollocks too.  Each screen of a tower is exactly the same graphically so there’s no visual incentives to keep playing, there’s no reason to drop back in in terms of gameplay either.  After ten minutes, you’ve seen everything.   Literally the only reason to replay is the trophies and that’s because, rather stupidly, they only give you one boss battle per run, even if you get to level 100 of a tower you won’t see a boss if you beat the level 18 boss on another tower.  So you’ve have to replay then but that’s from bad trophy design and not because of any kind of compelling gameplay.

The visuals are weak also.  The main characters are generic cute Chinese characters and the enemies are pretty generic too but at least more varied than the playable characters.  Each level is a simple square with no scenery or interactable objects at all.  And you’ll see lines of colour where your shots glitch out.  These were apparent immediately which again speaks to a lack of playtesting.  Also, sometimes enemies become one colour and you have no idea why. 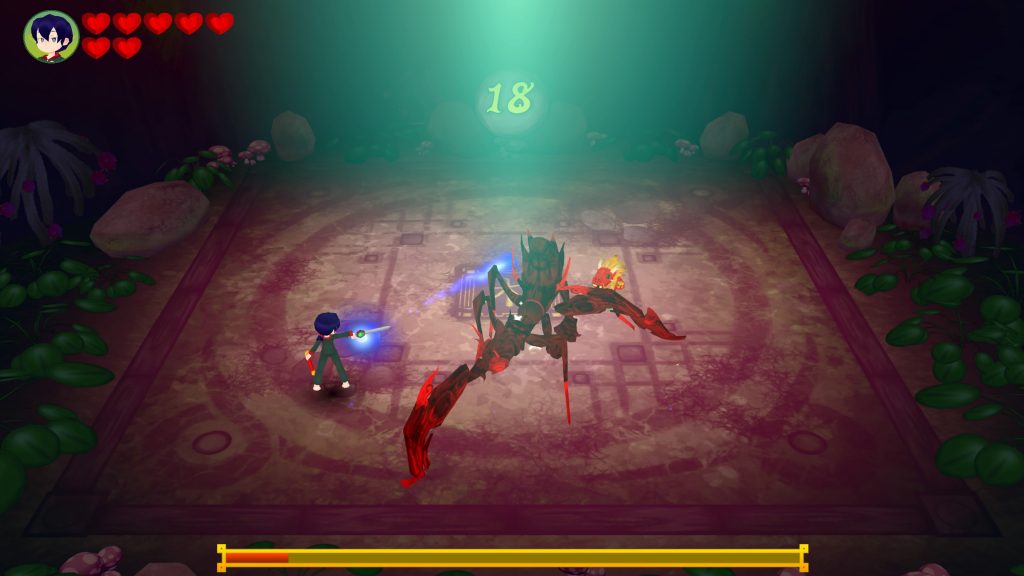 There’s no doubting that Papas Con Mojo know how to code.  We couldn’t put out a game like this but if we could code to this standard, we wouldn’t put out a game like this.  The problem is that they haven’t got the game design figured out.  The press release talks about being inspired by Cuphead, Furi and Enter the Dungeon (they mean Gungeon) but there’s nothing from those games that you can detect in this one.  You can tell early on that this game is going to be a weak effort (pretty much from the moment you see the opening menu and realise that it doesn’t support the d-pad) and it never does anything after to convince you otherwise.

The only high point is that the background music is pretty decent but even then the opening sound settings were a little out of whack and needed adjusting.  However, based on yesterday’s time with the game (the session where I beat it) I might have given it a point or two more for simply working but in today’s follow up session, I had an issue where the game wouldn’t progress after I cleared a screen.  The only other review out there currently (from Pure Playstation) also notes that issue.

If you’re going to take a classic, heavily-populated genre then you’ve got two choices.   You either make it spectacular or you make it simple but perfectly playable.  Jade’s Ascension does neither.  It’s slow, unexciting, flawed and the exact sort of thing that we didn’t want to close out the PS4 era with.  If this came out in this form twenty years ago on the PS1, it would have been forgettable then.  On a PS4 this is really without merit.

Review 0
3 Overall
Pros
+ Supports four player co-op
+ Music is alright
Cons
- Slow, clumsy gameplay
- Very repetitive
- Co-op doesn't add much to the experience
- Bland, empty levels
- Weak visuals
- Technically unreliable
- No story
- Poorly designed
- Adds nothing to the genre
- Useless sound effects
Summary
Jade's Ascension is weak both in terms of presentation and gameplay and adds nothing to an already populated genre. If it was technically reliable that'd be something but the game feels unfinished even beyond the incredibly limited scope of its design.