Iron Snout is a beat ’em up from Lithuanian coders SnoutUp and they describe the game’s genre as “arcade wolf fighting” which is a fair assessment of what the game asks you to do.  It is published by Ratalaika Games and so comes in PS4 and Vita versions as you expect, with each version packing its own easily attained platinum trophy.  Now usually with a Ratalaika joint, the platinum pops long before you actually finish the game but that’s not the case here but only because Iron Snout isn’t your typical modern day videogame.

Instead, the game has more in common with the old Nintendo Game and Watch handhelds from the ’80s.  These titles offered simple LCD graphics and basic, but addictive, gameplay where you generally only had one or two elements to worry about and you just kept going until your died or ran out of battery/nutrients in your body/the will to live. 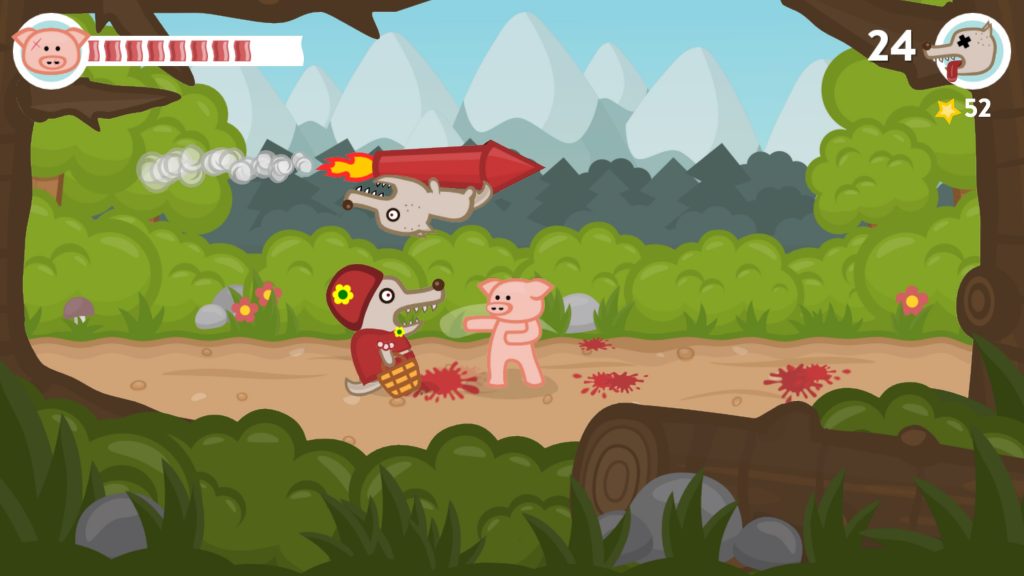 In Iron Snout you play as a pig who stands in the middle of the screen and you have to defend yourself from an onslaught of wolves who pile in from the left and right sides of the 2D play area.  They come in different guises and each of these has their own attacks.  Some will just run up to you and try to take a swipe but others will bounce, fly or throw things at you.  Sometimes you can take an enemy out with a simple attack but other times you’ll need to avoid their attack and catch them on the way past.  There’s not a ton of variation here but there are enough enemy types to keep the game interesting for a while.

To take out these wolves you’ll need some moves and thankfully it turns out that you are a master of Pig-Fu.  You can attack to the left or right at three heights – normal, ducked and in the air (old-school retro gamers will be reminded of the mini-game in IK+).   You control your height with the left stick or d-pad and with either left and right on the d-pad,

.  Or you can use any combination of those.  As you’ll be mashing away at those attacks, it’s a nice touch that you can mix up the controls in case anything gets uncomfortable or you want to trade precision for frequency.  Either way, the controls are extremely responsive. 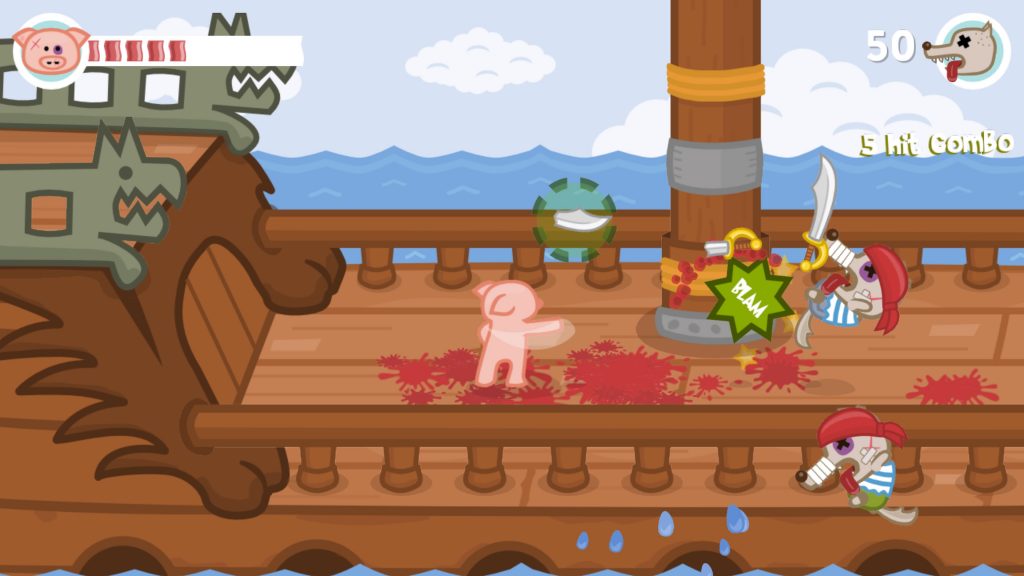 You then pick your game mode and have at it.  The enemy attacks come thick and fast and increase the longer you survive and you’ll need to be on top of your game if you want to put in a good score.  In the normal game mode you can take eight hits but there is also a sudden death mode where you can only take one attack before the game ends.  Either way, the action is the same and while it is pretty basic, we have to admit it is quite a lot of fun especially when you start to flow a bit and find yourself dodging attacks, kicking enemies in the face, stealing their weapons and using them against incoming threats.  And when airborne enemies start swooping in, the ability to dodge them and maybe throw other enemies into them makes the game feel like a really fun and frantic experience which again takes us back to perfectly dodging our way to a 999 score in the Game and Watch version of Donkey Kong 2.

Games of Iron Snout are usually done in few minutes unless you’re really good but are addictive enough to make you hit that retry option but, as you’d expect from a simple game like this, the game does lose its appeal fairly rapidly.  It doesn’t help that Ratalaika’s insistence on having an easy platinum means that your motivation to keep going will soon be tested.  If they’d made the trophies a little more challenging, that might have been a good way to increase longevity here.  Also, there are no leaderboards which means that there’s not much reason to keep playing. 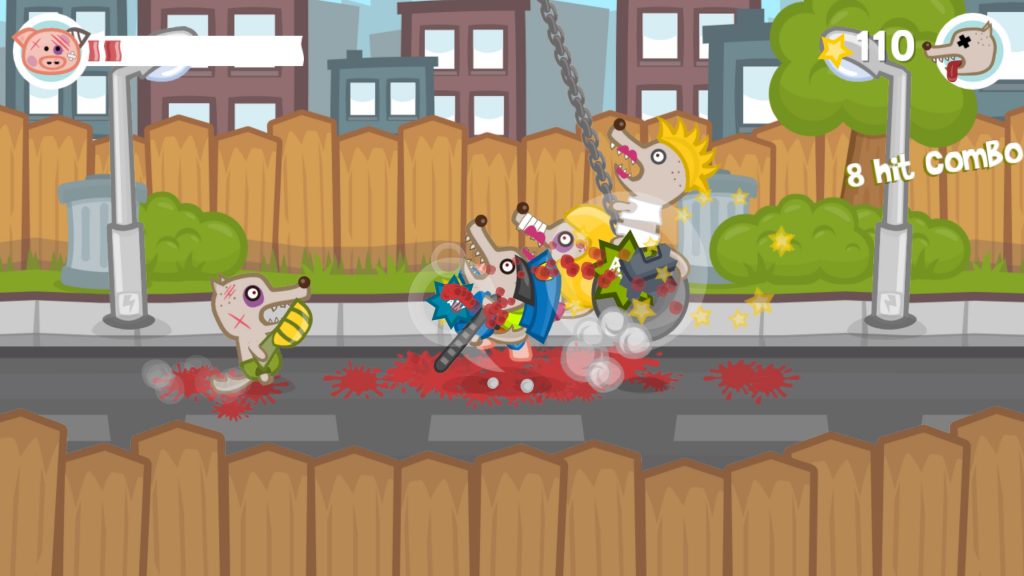 Taking out one hundred enemies on a level will unlock the next one and there are three in total, each with their own enemy types.  We’d like to have seen more levels for sure, especially with them all being one screen affairs and that speaks to the game’s early days as a freebie on Steam.  It’s cheap here, the Ratalaika games always are, so we can’t complain about value for money but there’s not a whole lot to praise here when it comes to content and so half an hour after installing it you may find the only thing stopping you from deleting it is its low footprint on your hard drive.

Visually the game sports a clean, Flash game kind of aesthetic with some cute character designs and some comedy cartoon gore.  It all looks a bit like the old Happy Tree Friends animated series with the only let down being the animation on your main character.  There are barely any frames of animation as he combos his way through kicks and punches.  It keeps the speed up and makes everything responsive but it does make it look like the game is cutting a few corners.

As far as the Ratalaika games go, this is one of the more fun ones and its silly visual design and super sharp controls make Iron Snout just about worthwhile.  Gamers looking for some real substance would be well advised to give this one a miss but fans of simple retro gaming may get something from it and die hard Vita fans will appreciate the cross-buy support.

Iron Snout
5 Overall
Pros
+ Responsive controls
+ Bright and cheery visuals
+ Cross-buy
+ Can be addictive
Cons
- You'll have seen everything in half an hour
Summary
Iron Snout is an enjoyable one-screen beat 'em up that has slick controls that help you keep up with its frantic but fun action. Its mayfly like lifespan is an issue though.