As my last review involved dreaming, I might as well keep this existential train rolling. Coming from FFT Games, Into A Dream is a narratively-driven puzzle-platformer about a man’s depression. With some obvious cues from games like Limbo, this game manages to keep the gameplay fairly light whilst delivering some hard-hitting punches. 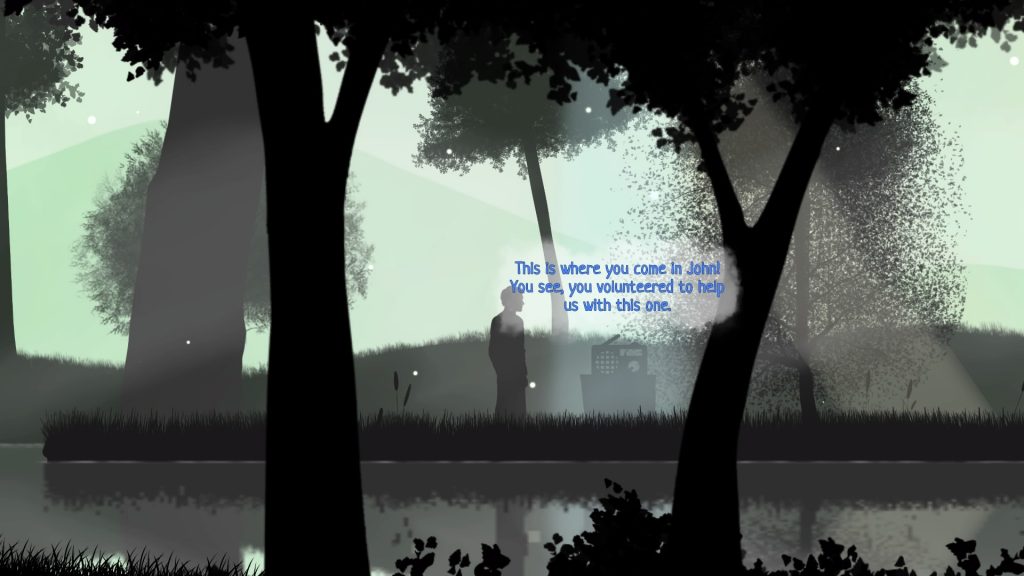 Into a Dream takes on a fairly weighty subject matter and handles it well. The scenes, whilst disconnected do run together to provide a cohesive plot. Our protagonist is John Stephens, a work colleague of Luke Williams who has undergone a mental breakdown. Under the premise of a medical procedure, you must dive into his memories and uncover why he’s so clinically unwell.

It’s a story dealt with a lot of compassion and empathy. At times it can sound like the characters are over-sharing but it does allow the player to get a more complete perspective. Very little is held back and that did make some of the exchanges sound a little less human. The voice acting is good but some of the delivery can feel a touch off. It’s hard to know how much of that is down to the script or down to some of the voice cast not being native English speakers. Some lines do fall flat. 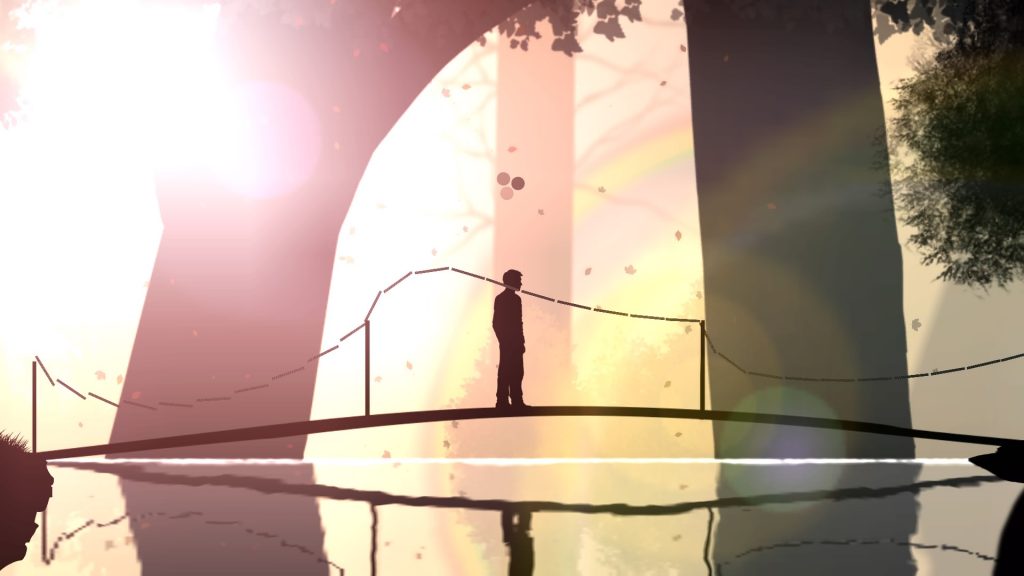 Our main characters are solid. John convincingly performs as some concerned for his friend whilst Luke will often pour his heart out, shut up shop and generally act conflicted. He’s got a lot on his mind and it shows. There’s a build to it as you uncover more of Luke’s woes and it’s understandable to see how the pressure gets to him. It’s a repeatable story that in the final act starts to become a little ridiculous. You can get away with a lot with a dream premise but the road to the climax seemed at odds with what was a largely grounded story.

Musically, there’s a strong piano score that helps establish the mood. There’s a good ambience involved and the only time the score seems to fail is in the closing stages. It’s not a problem with tone but rather a technical issue where the soundtrack loops rather obviously. Otherwise, it’s acted and scored well. 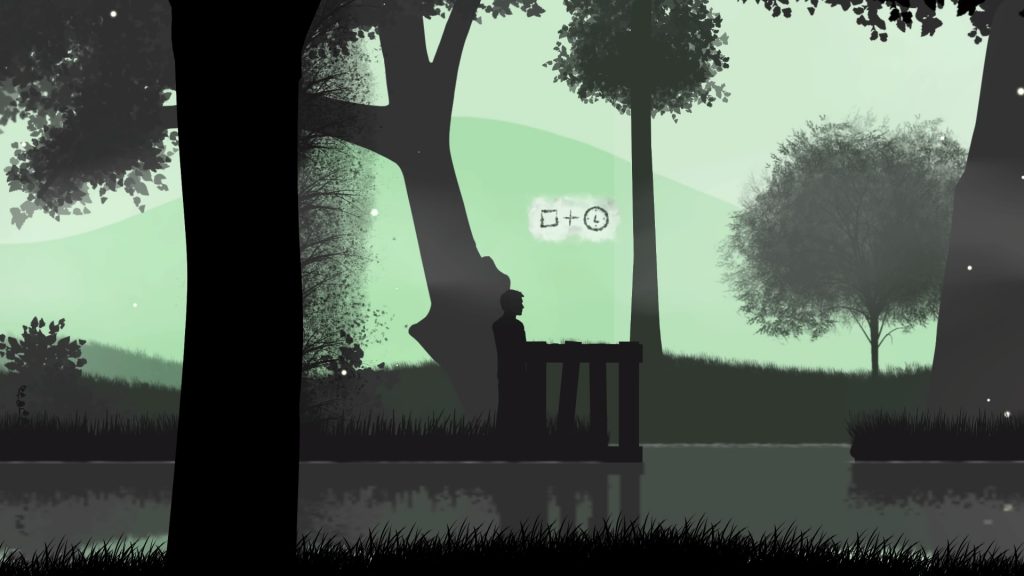 It’s presented nicely with the silhouetted characters set against some rather lush and colourful backdrops. It all looks rather lovely with some very seasonal visuals on display. It’s great to look at, nicely animated and detailed. The little film burn effect you get as you change scenes is a stylish touch. John’s animations can look a bit out of place when contrasted with the rest of the static cast. It does help sell the impression that he’s a bit of an interloper but the way his joints move make him appear puppet-like.

Any serious shortcomings for Into A Dream come from a purely technical level. None of them are fatal although I definitely felt a close call. Hitches as they change from one scene to the next is forgiveable but I’ve had a couple of more peculiar instances. The more common and replicable being towards the closing stages. Comparing it with a PC walkthrough, there appears to be a screen that’s missing from the Playstation 4 version I reviewed. Thankfully, it doesn’t require some blind, complex platforming but I did wonder if the game was broken until John’s visage wandered into view.

With the game autosaving fairly frequently, you could be unfortunate and find yourself in a tricky situation. I had another example of the game seizing up. During a party scene, I had characters engaged in dialogue that, for whatever reason, didn’t stop. The game doesn’t save during dialogue so all progress was lost. It’s something to be aware of but, after a few playthroughs, it’s hard to pin them down as serious problems. Especially given the relatively short experience. 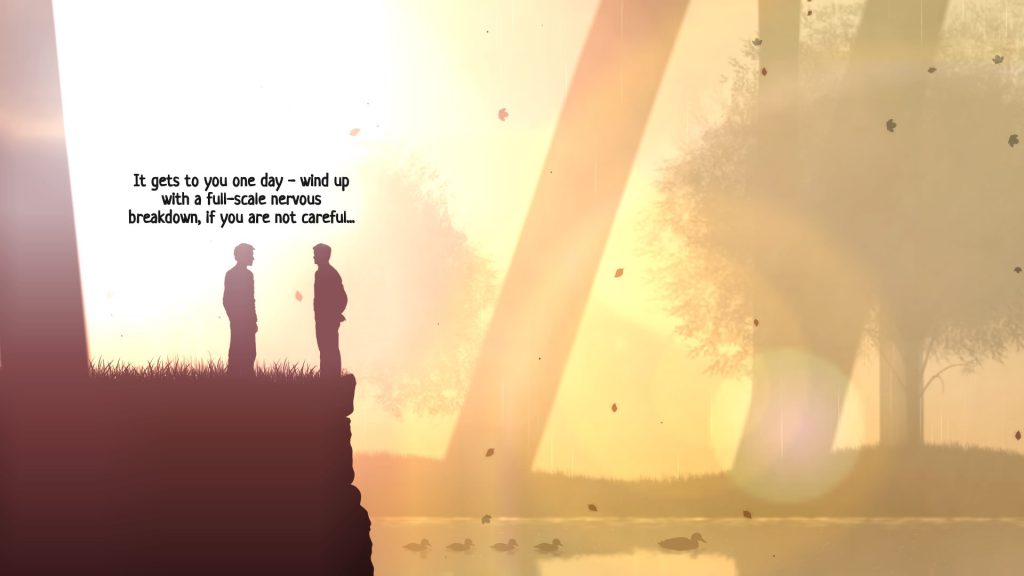 When it comes to the gameplay, the platforming required of you is kept simple. Puzzles won’t tax you and there’s very few that require anything beyond an easy task. Items and switches are easy to spot and there’s a good sense of momentum to things. Whilst I do make comparisons to games like Limbo, this is a much more forgiving experience with the emphasis firmly placed on the narrative. It’s serviceable but not a challenge. You can revisit the game for missing trophies but the story won’t branch beyond some choices of dialogue. I’ll admit I did play a role for my first playthrough. I told that crowd I was from Accounting and that’s the hill I’m dying on. It’s not something I often do with games but the nature of the story almost demanded it.

As a complete package, Into a Dream does well to handle some fairly heavy subjects with a degree of deft. The presentation brings plenty of life to what are mostly static people and it helps sell the unease of being inside someone’s memories and thoughts. It’s enjoyable, even if the climax does become a bit more heavy-handed and presents some of the game’s more stilted dialogue.

Into a Dream
7 Overall
Pros
+ Beautiful visuals.
+ A decent, sombre piano soundtrack.
+ A strong, heavy narrative that's handled with care.
+ The main characters are well acted.
Cons
- Some of the voice acting can feel a little stilted and flat.
- After a fairly grounded story, the climax can feel a little ridiculous.
- Some technical oddities that thankfully don't appear terminal.
Summary
Into a Dream is a thoughtful and well-observed effort that manages to get the broad strokes right. I was compelled by John and Luke's relationship although the cast don't seem to hold much in reserve. The voice acting and writing does suffer a touch from some stilted delivery but it largely manages to hold together. The gameplay offers to move things along with some simple puzzles and, despite some technical hitches, it's a recommendable effort.