Can’t Drive This is driving game but with a heavy emphasis on track construction and it comes by way of German coders, Pixel Maniacs.  It’s a co-op focused affair and entirely chaotic too.

The idea is pretty simple.  As one of you drives, the other creates the track.  Both parts of this equation are pretty easy with the driver just using the left stick to steer and triggers to accelerate and brake while the builder places pieces of the track using X to place and shoulders to rotate them.

The uncomplicated interface is essential as the game moves at a fairly solid pace (especially as the driver will explode, Speed-style, if they go too slow).  You build the track using square panels and these can have straight roads, turns, ramps, speed boosts, firey hoops and other obstacles on there.  You can place them anywhere within the grid system of the track in a way that evokes memories of the old puzzle game Pipemania (or the hacking bits from Bioshock). 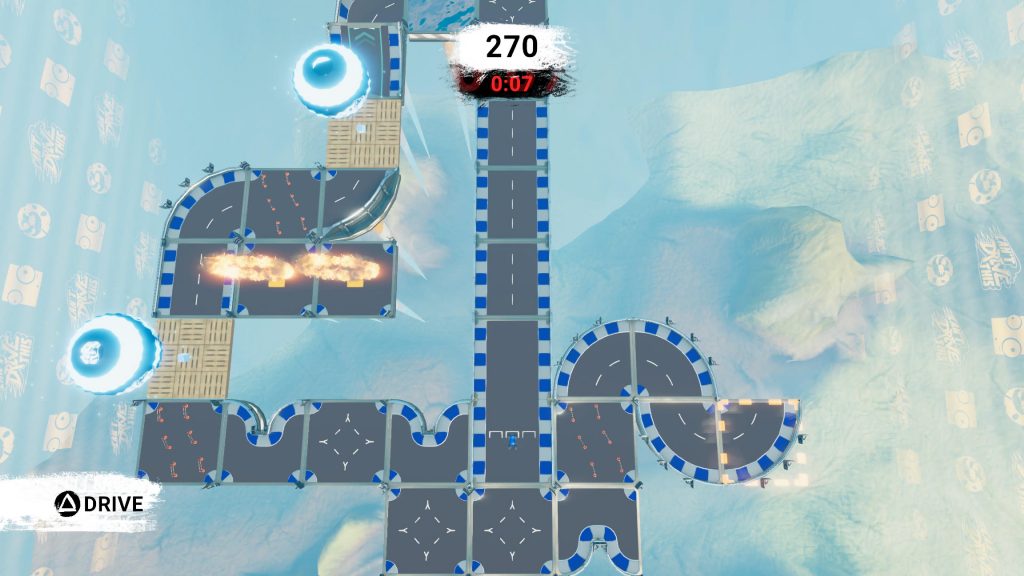 The driving part is relatively simple and the combination of elements plays out like the original Trackmania game (no, not the one you remember but rather the 2003 original) and while the game is designed for co-op (and it supports online and local) solo play is also supported by giving the player a time limit within which you can switch between driving and building.

Solo play isn’t a ton of fun though and so you’ll be wanting to play with a buddy.  This is definitely the way forward but isn’t without some problems.  The main issue is that while you both see a split screen view (even online), sometimes the driving side affects the building side, giving the builder a terrible view of the action.  They aren’t independent but they really need to be.  Too often our runs were scuppered by a lack of visual information (see below pic for a good example).  This is true of solo play too though with us finding that the timer would block our view of key areas.  That said, it is kind of fun to play and that’s in either role.  The chaotic nature of the game does make it enjoyable but, again, that camera does really spoil things at times. 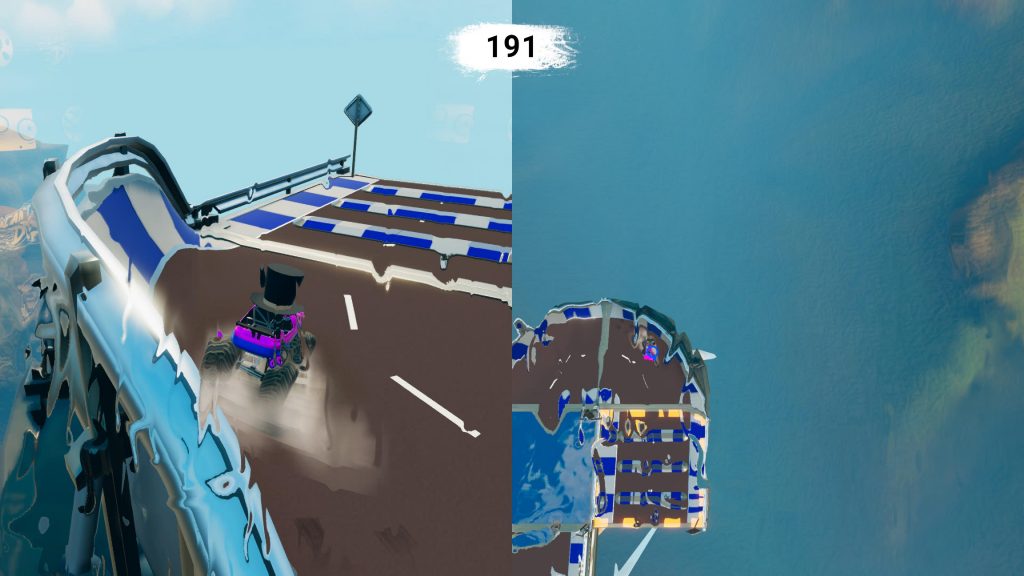 The main mode (Yardage) is all about getting as much distance but Can’t Drive This offers some additional modes too.  Game of Drones sees you grabbing holocubes with a view to extend timers, while Capture the Egg offers 4v4 online action although annoyingly we couldn’t pull this together with a mix of friends and randoms.  You’ll need four local players to form a team which isn’t happening during this lockdown.  The fact that this mode can’t be filled with random matchmaking is a really odd choice and given how easy it is for indie games to die online, I think it’ll be rare for two four person squads to actually find each other.

That’s pretty much it though which feels like a bit of a missed opportunity.  There’s just not much content here.  The single player mode should have had levels with specific puzzle-based layouts to get the brain working for a start but also, given the similarity between this and Trackmania (and also Gripshift) we would have liked to see time trials where you can figure out short cuts across parts of the track.  Also, a standard Mario Kart style race mode would be nice and, while we’re daydreaming, a pressure-free track building mode would be good also. 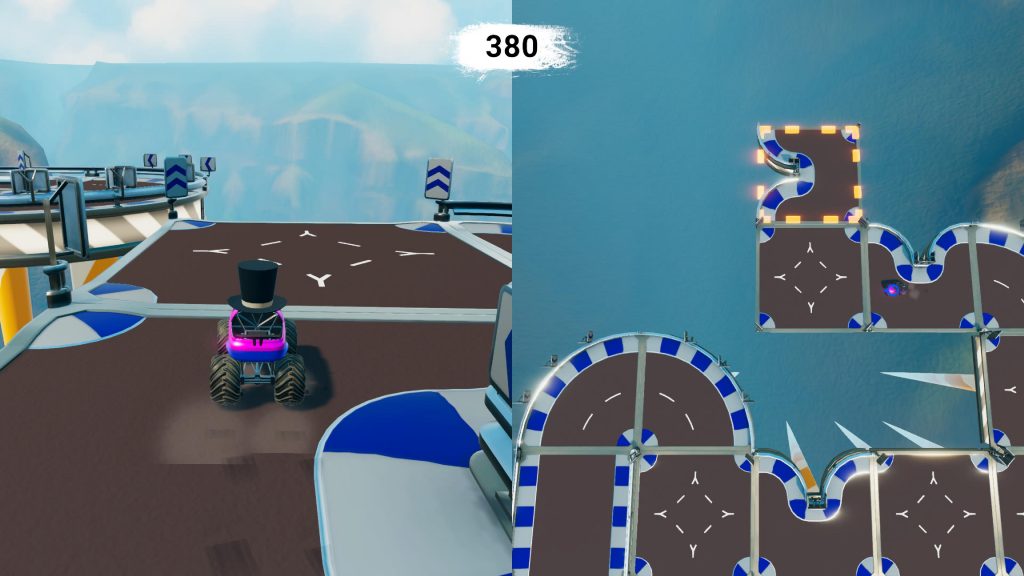 Instead there’s no real reason to keep playing the modes Can’t Drive This beyond earning trophies and getting some cosmetic items.  While co-oping our way through it, we felt as though we’d seen everything within a few minutes and the game’s overall structure wasn’t pulling us back in.  That’s really the story here.  Can’t Drive This feels like a multiplayer mode that would normally be attached to a big single player campaign.  A few modes to play around with when you’re done with the meat of the game but there is none of that here.

The game’s presentation is a mixed bag too.  While we like the clarity of its design, those camera issues really get in the way.  On the plus side though, the DualSense haptics do get a bit of a work out with some resistive triggers and a some good vibration based on the types of tiles you are on.  We’re very pleased to see this implemented, even if the resistance is just a tad too strong maybe.

Beyond that, it’s hard to find much else to say about the game because there just isn’t much to it.  There’s a good core mechanic here for sure and there’s some fun to be had but everything around that feels like a missed opportunity or just not refined enough.  So, it’s hard to recommend Can’t Drive This but we’d be well up for a fleshed-out sequel.

Summary
Can't Drive This mixes up driving and track building in a clever way but is a bit too thin a package and is spoiled by some bad camera positioning at times.