RIP Bigben Interactive, we barely knew ye. Now known as Nacon, they bring us Belgian developer Neopica’s latest in Hunting Simulator 2. Something of an about face from ETRC  by the same developer, though they did release the first of these games in 2017. We have to confess it passed us by originally.

We came into Hunting Simulator 2 with the very best intentions. After an at best perfunctory tutorial, you’re thrown straight into the game proper. Your first task is to get a weapon of sorts. You’re already gifted a dog as a companion during the tutorial. You’ll be glad of his company, put it that way.   The first environment in Colorado you’ll likely explore is all very verdant and lush. You may even spot an animal if you’re lucky. Or in our case, an animal’s piss. We wish we were joking. After a couple of evenings play, our save file had six hours on it and we’d shot six animals total on it. Boredom incarnate. 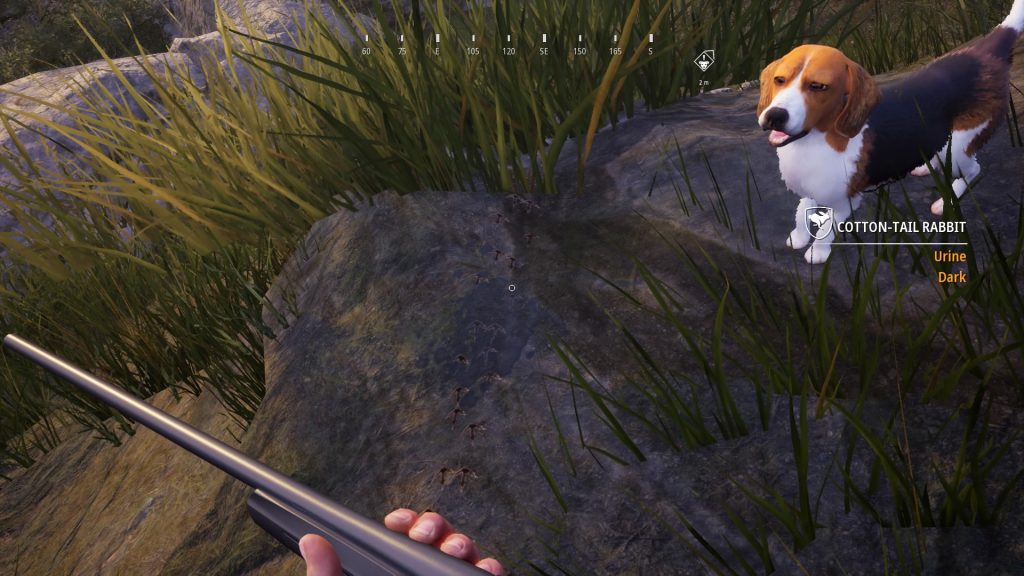 Get used to a whole lot of nothing as HS2 does a nice line in very sparsely populated woods and wilderness. In our six hour stint before we restarted we had walked more than marathon distance , analysed almost two hundred animal tracks and apparently spotted eighty seven animals. The only thing that kept us sane was our ever present dog who was tracking for us.

Part of the problem is that Hunting Simulator 2 concentrates on the scenery to such an extent that you’ll do well to spot any damn animals. Yet they retain perfect line of sight and peg it at the first opportunity. If you include our second save where we got a better idea of what was going on and played to suit, we ran around for ten plus hours and killed a mere ten animals. Two of these were from the mandatory unskippable tutorial that shows up even if you’ve done it before. 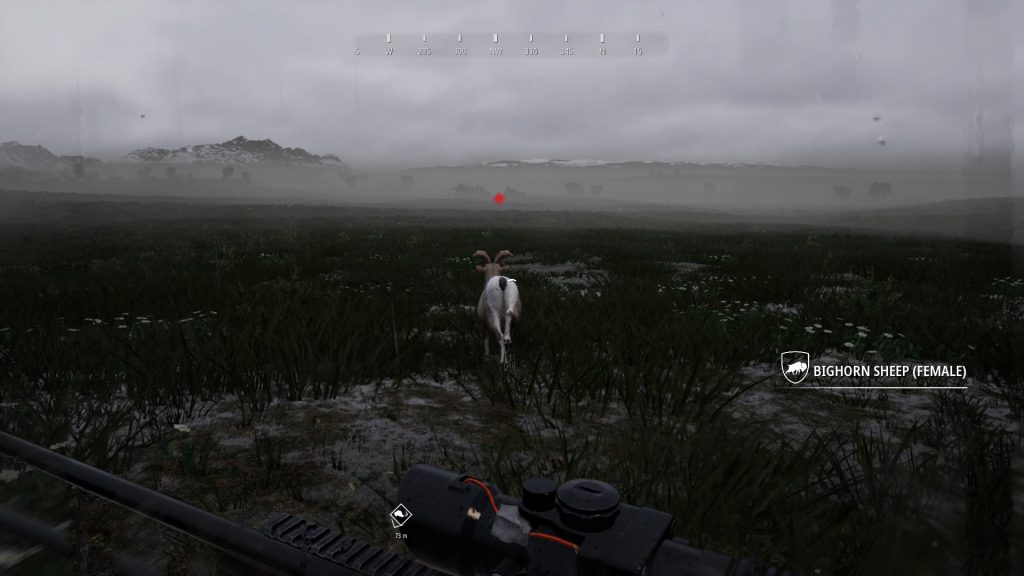 To shoot a particular animal you’ll need a permit for that animal type. These all cost ingame currency, just as all weapons and accessories do. Another thing that exacerbates the feeling of alienation for a new player is the fact that most of the rules are hidden in a wiki at your hunting lodge. We thought we were being clever by getting all the permits in one area. You can only use predetermined weapons on a certain animal type. At least in theHunter we previously reviewed, if you shot a bison with a standard rifle you’ll piss it off and perhaps get trampled. Not here.

For a start, don’t be shooting a duck with a standard rifle even if you have a permit. DING. A nice fine for unethical hunting. Even if you have a shotgun, don’t be shooting towards a flight of ducks or geese more than twice. You shoot a third time, DING. A fine. Money is tight at the outset anyway, so to get bullshit fines feels like death by a thousand little pecks when you can ill afford it. 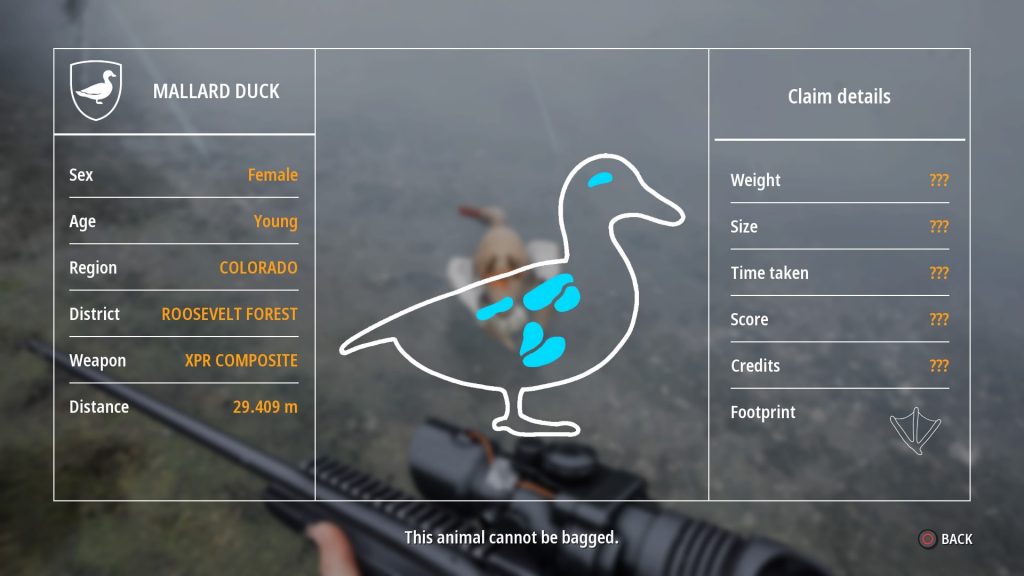 Even if you have a permit for an animal and the correct weapon some of them feel like bullet sponges. We must’ve shot this one longhorned sheep a half dozen times over the course of our stalking it. It bled and bled and bled but did it die? Did it buggery. This was almost enough to make us call it. We discovered geese were easy enough to track down, what with the whole hanging around in convenient groups on lakes and ponds and obligingly flying over your head. We downed one only to get fined, though we didn’t know this would happen. Then we called it and started a new save.

After the mandatory tutorial, we went with a shotgun and bow so we could at least take down some easy bird kills at the very least. Then we discovered another quirk. If you shoot down a bird over a body of water, it’ll plummet into the water. You’ll even see it floating there. But in some cases, you won’t be able to retrieve it. At the same lake, we shot another which fell close to us. This time it landed on a rock by the shoreline. You’d think we could retrieve that. Oh no, we couldn’t get close enough. Here’s the best thing. 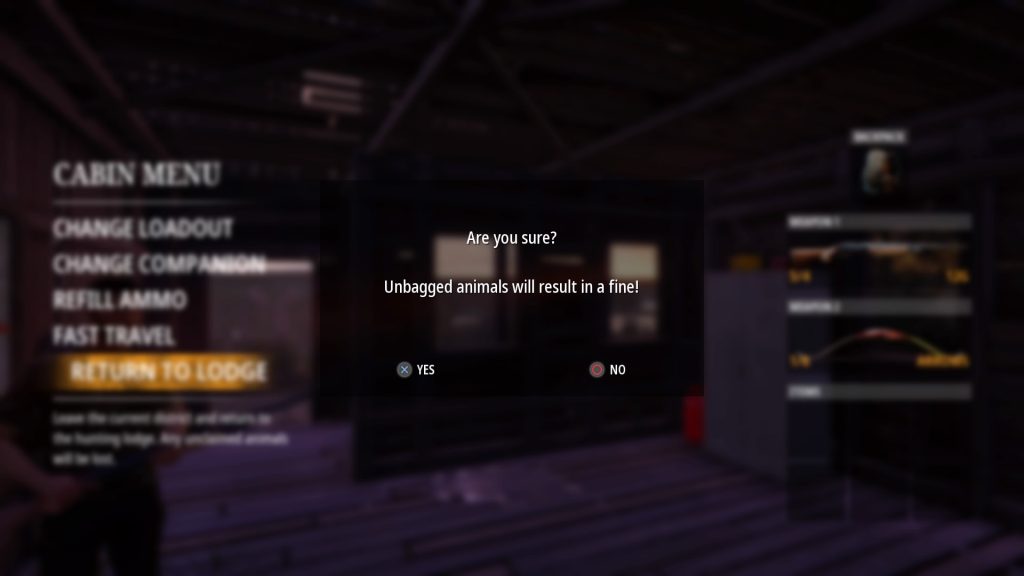 If you return to your lodge without having ‘bagged’ a kill, you get fined yet again, Yes, even if you’re unable to physically reach a kill you’re shit out of luck and get hit in the wallet. To further rub salt in the wound, the arbitrary unethical kills can’t be claimed as a trophy or for ingame money. So you get fined and can’t offset it at all.

What would really help would be if you had some sort of mechanic where your view of the animal is the same as they have of you. Not once did we see the mythical rabbit that supposedly was hopping around in our vicinity. Though if we had, we’d probably have got fined for shooting it with the wrong gun anyway. 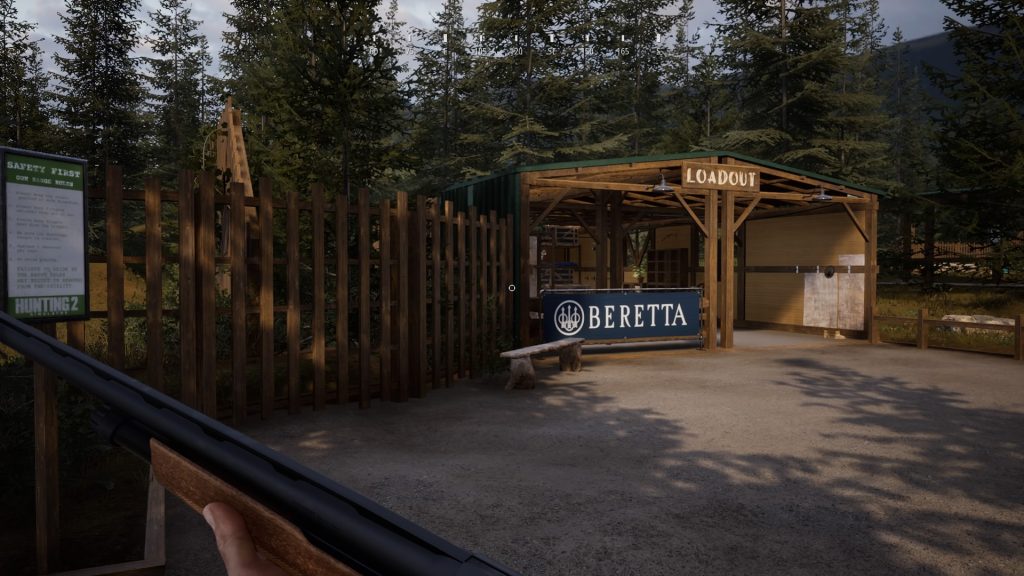 The practice range next to your lodge is an oddly compulsive play, but you can only play with the weapons you actually own. Even this part proves irritating. To start the range minigame, you go to the main tent. You get thirty seconds typically which gives you a fair chance. But you can’t restart straight away for another attempt, you have to spend thirty seconds traipsing back to the range-head to begin again. This has the effect of making even this feel like a chore unfortunately.

Your lodge is your main hub where you can buy weapons, accessories and permits. We’d recommend a backpack that’ll allow you to carry two weapons anyway. You can select the time of day you choose to hunt, morning, noon or night. We went with the first two options but clean sacked off the night option as we were having enough trouble finding animals in normal conditions, never mind otherwise. 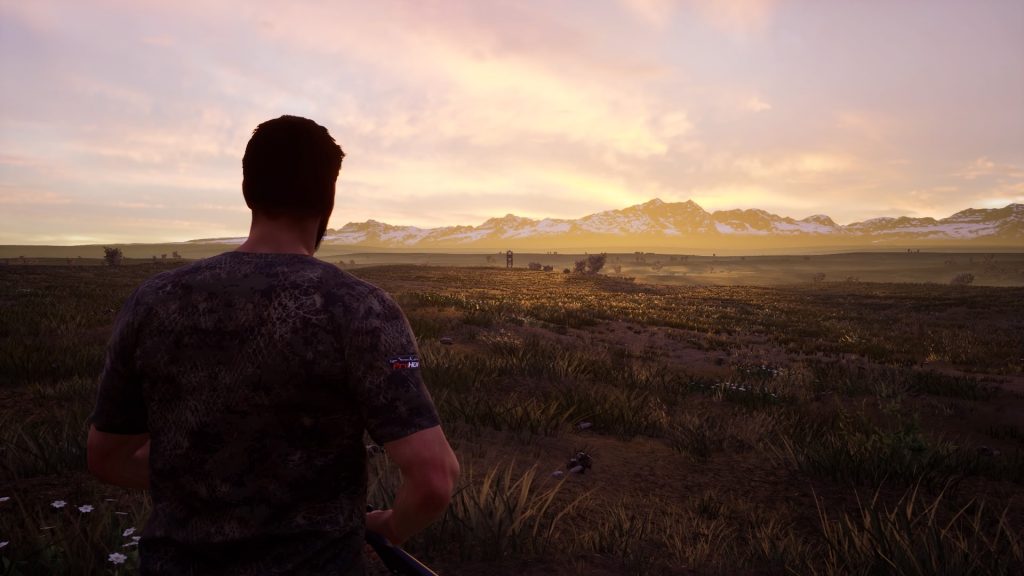 The UE4 engine gives sweeping wide vistas, that sometimes come across as beautiful. But for a hunting game it comes away feeling a bit generic and better suited to an FPS. Combined with the fact you’ll rarely see animals we can’t help but feel hard done by here. After while boredom sets in and running around discovering hunting towers and stands becomes preferable to animals. They almost feel secondary.  Which sort of means that Hunting Simulator 2 fails in that respect.

Actual huntsmen might like the rigid structure here and the fact that you can walk around for hours without seeing any animals besides your faithful hound, but for us HS2 falls down in the being fun part. If we want misery while we trudge around aimlessly, we’ll go shopping at Costco. We’d like a hunting game to perhaps involve a little more hunting. Not being penalised for trying to play a game. Especially when you eventually happen across a quarry only to find you can’t shoot the bloody thing ’cause you either have the wrong weapon or missing permit.

As it is, we’d rather play Neopica’s FIA European Truck Racing Championship instead of this. If we had to choose a hunting game, we’d go with theHunter over HS2.

Cons
- Very rarely will you actually see an animal, much less shoot one
- Far too many restrictions on weapons and permits
- Fines for every infringement are a complete buzzkill
- Even if an animal can see you, it's unlikely you will too
- Practice range is overly clunky
Summary
Hunting Simulator 2 might as well be called Misery Boredom Simulator as we spent ten+ hours playing it and came away wanting shoot ourselves to end it all.