Hoggy2 is the sequel to a game we had no idea even existed until Ratalaika sent it to us for review. Yet it all seems very familiar despite that.

The titular Hoggy is an amorphous blob that doesn’t remind us of Kirby in the slightest, oh no. His continuing mission is to seek out new fruits in new locations while vanquishing evil robots who threaten galactic peace and harmony.

Naw, actually his mission is to eventually defeat the shit moon robots that are holding his blob kids hostage for no particular reason other than the fact they can. You collect keys as you go from one jar to another collecting fruit. Think the pots you go into in Doki Doki Panic aka Super Mario Bros 2 for some idea of where you’re at. 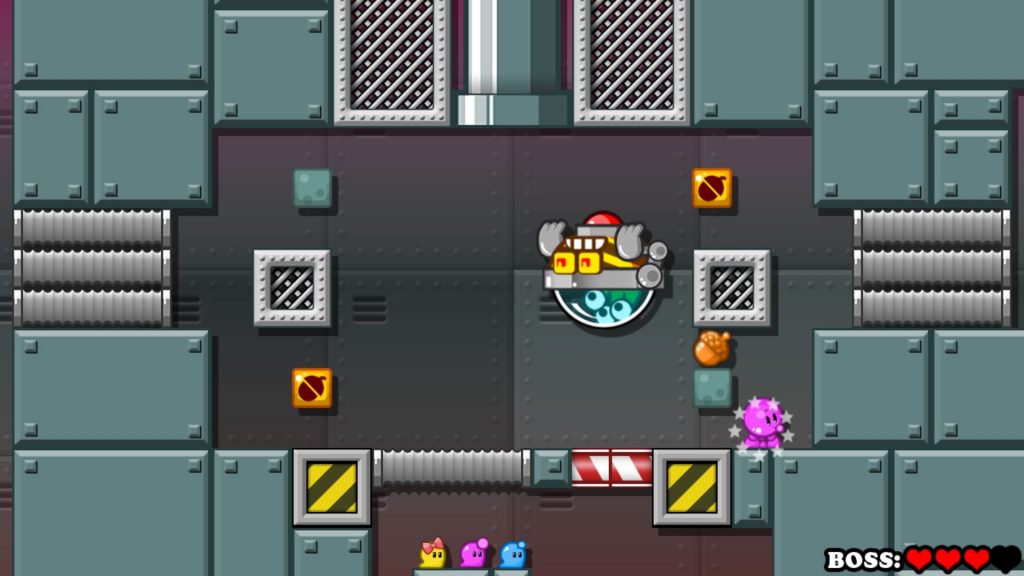 Collect all the fruit in a particular vessel, you get a key. Keys are your currency for reaching otherwise gated off areas. Hoggy himself isn’t the most mobile of characters, seeing how his moveset is limited to left and right and he can’t jump beyond jumping from roof to ceiling. This is further complicated by enemies who’ll instantly kill you and level furniture such as spikes and bombs that will readily maim you on demand. Any mistakes are generally your own though, as this reviewer’s kid kept telling him with glee. Everyone’s a bloody critic, even five year olds.

Another hazard you’ll encounter is the block that will instantly kill you in the event you or any other object touches it, resplendent with comedy boxing glove. On the occasions you come up against this, you’ll generally have to think laterally about how you negotiate levels. 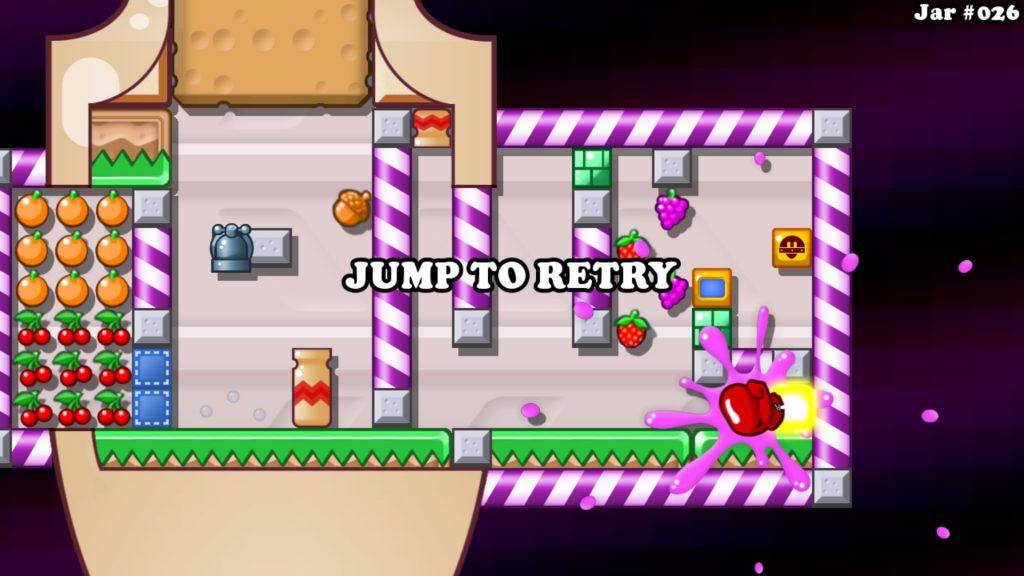 Gameplay is immediate and intuitive, just as the graphical style is bright, breezy and kid friendly. The developers even saw fit to include a 20 key kids mode to accomodate younger players before they graduate to the occasionally taxing main game.

Hoggy himself can pick up various items en-route to make himself impermeable to damage as well as modifying enemy behaviour. Acorns grant him with the ability to crush some enemies and blocks, plus in some cases slow down enemy projectiles. We’re not quite sure why, but it’s a convenient device. 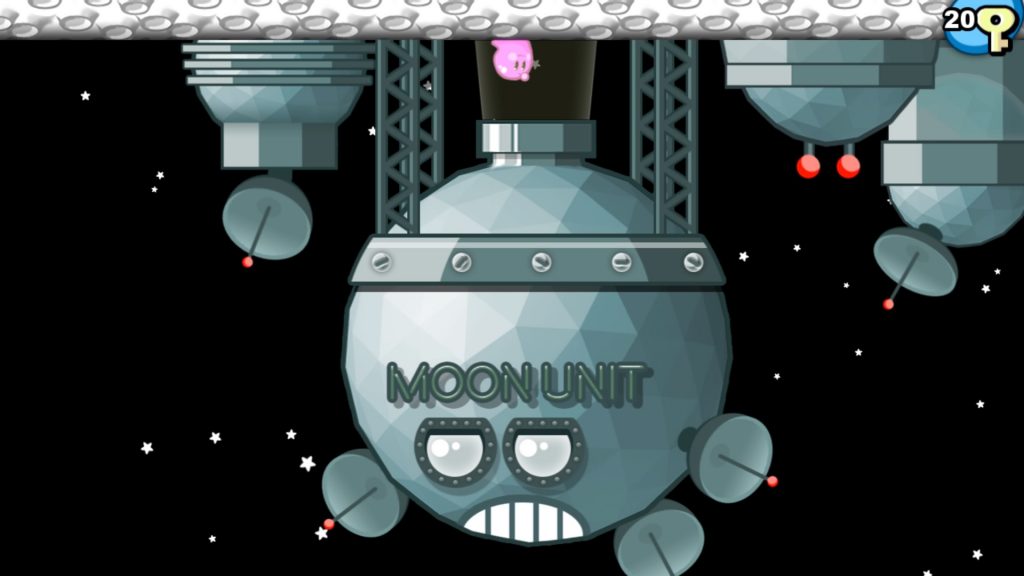 In addition he can pick up mushrooms that clone you, not unlike cherries in Captain Toad Treasure Tracker, perhaps the mushroom being an oblique nod to Nintendo’s WiiU/Switch hit. The most fun is the chilli pepper that turns Hoggy into a flaming indestructible fireball, impermeable to almost every hazard you’ll encounter. The downside being unable to pick up any fruit as you’re in this altered state, so you’ll need to find a dripping tap to revert back once you’ve cleared a path.

This being a Ratalaika release, you won’t  take too long to get your platinum on both PS4 and Vita, in the case of the main game you’ll have unlocked all the trophies having not seen much before the first set of puzzles and a sub-boss that proved easy to defeat. 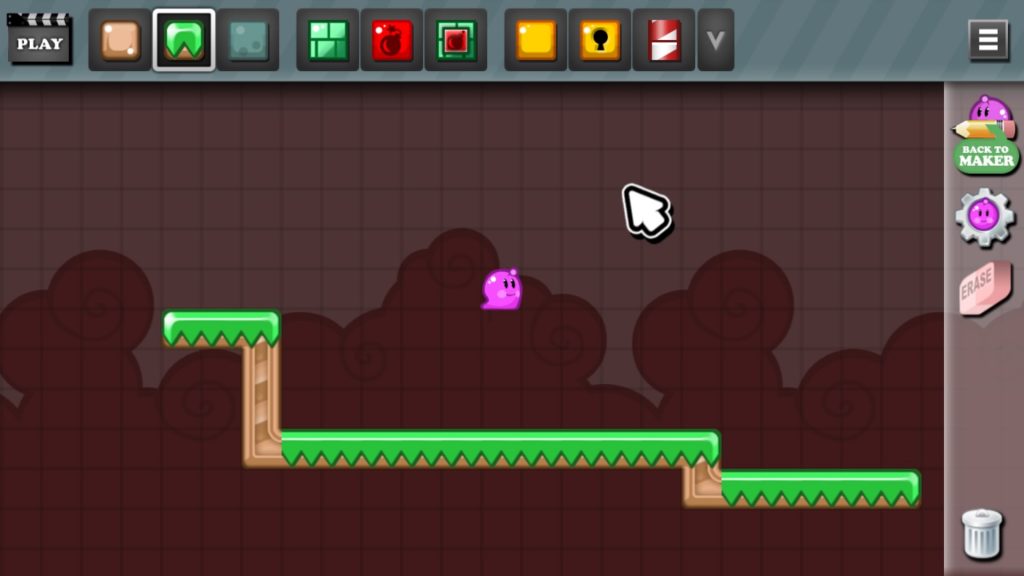 This is our second Ratalaika release in a row where we’d recommend you keep playing beyond getting your platinum, the short immediate nature of each level making this a perfect fit for sporadic play on Vita once again.

Coupled with a level editor to create your own gauntlets of death defying fruit acquisition, this is an incredibly generous package for not very much cash. Our child expressed a great interest in creating his own levels as well as playing solo, Hoggy2 being a perfect example of a game others might move on from rapidly, released just in time as the schools go into their summer break.

All in all then, Hoggy2 is a fun kid friendly puzzle game with the usual easy double platinum for not very much cash. The level editor is an added sweetener as is the kids mode. Recommended.

Hoggy2
8 Overall
Pros
+ Kid friendly
+ Fun responsive gameplay
+ Tons to do
Cons
- Some later levels have increasingly oblique solutions
- Trophies are a rinse as ever, better than a one and done
- Pretty derivative, not massively original
Summary
Hoggy2 is a fun kid friendly puzzle game with the usual easy double platinum for not very much cash. The level editor is an added sweetener as is the kids mode. Recommended.