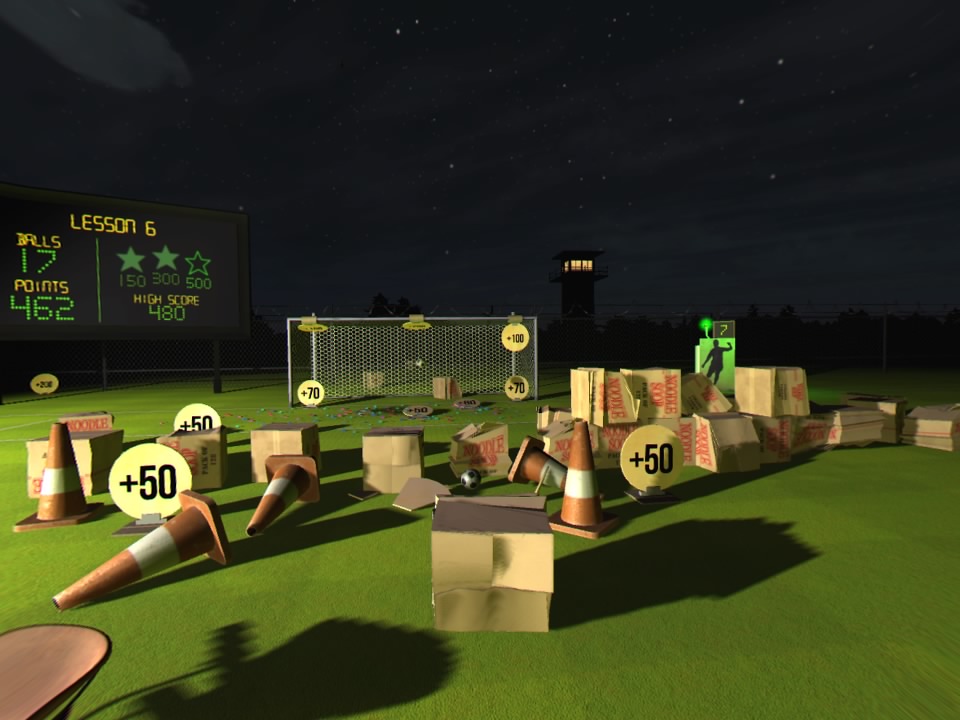 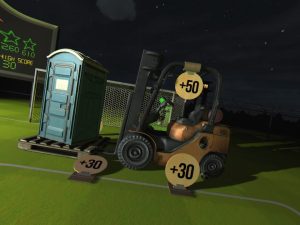 We’re getting quite a few games in to review at the moment but only two of the writers (myself and Grizzly) have taken the leap into PSVR and so have been dividing up the responsibilities there based on our general genre tastes.   Grizz hates football.  I kind of hate football (I’m a lifelong QPR fan and the last thirty years have been miserable) so I figured I’d review the football game.  However, Headmaster is so loosely about football that anyone can play it and enjoy it.

The concept is as simple as it is daft.  You are a football player who has been sent to, or rather sentenced to, the Football Improvement Centre.  With its barbed wire fences, prison cell styled accomodations and grim atmosphere, it resembles a prison camp and the only way out is to work on your game, or rather one aspect of it, graduate through the various examinations and rejoin your football team.

As dark as the concentration camp setting, and communist style talk of ‘re-education’ is, Headmaster plays the whole thing for laughs but in a smart Portal 2 kind of way. 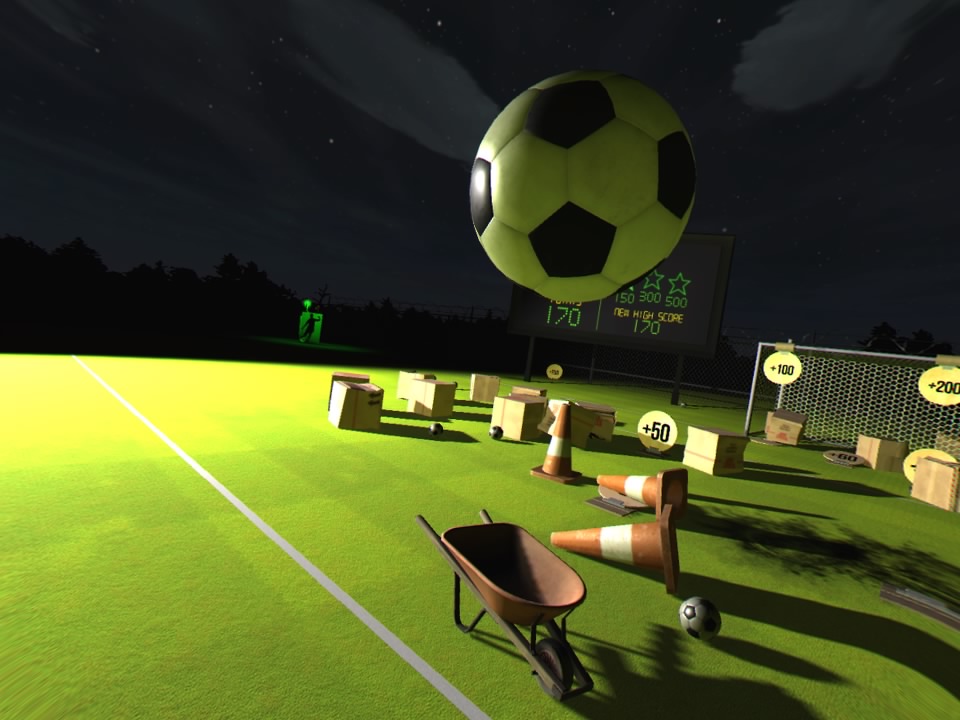 Each level is something of a mini-game.  On a basic level, your job is to head footballs at targets.   An automated ball launcher flings footballs at you and you head them deftly towards you target thanks to the tracking abilities of your PSVR headset (the unit is required for the game).   That is the core of the gameplay right there, all that changes is the distance to goal, the angle of the approaching balls and the type of targets, and obstacles, that make up the level.

Your only interaction with the game is pretty much heading the ball.  You use the joypad to pause and that’s about it.  Menu interactions in the game are controlled by looking at the option you want to select.  Aside from that, to the outside world you’ll be making headering motions in the air, thankfully from a seated position.  The controls are actually surprisingly tight.  I was able to make micro-adjustments to hit the targets I needed to knock down and it doesn’t take long to figure out how to get things done.

If you let the incoming ball hit you square in the face, it’ll bounce forward slowly.  Meet it with a bit of pace and that pace will be added to the header.  Head it with the left of your forehead and it’ll cut to the left.  Hit it with the top of your head and you’ll apply some height and so on.  It takes a few seconds to get it and after that it’s all very intuitive. 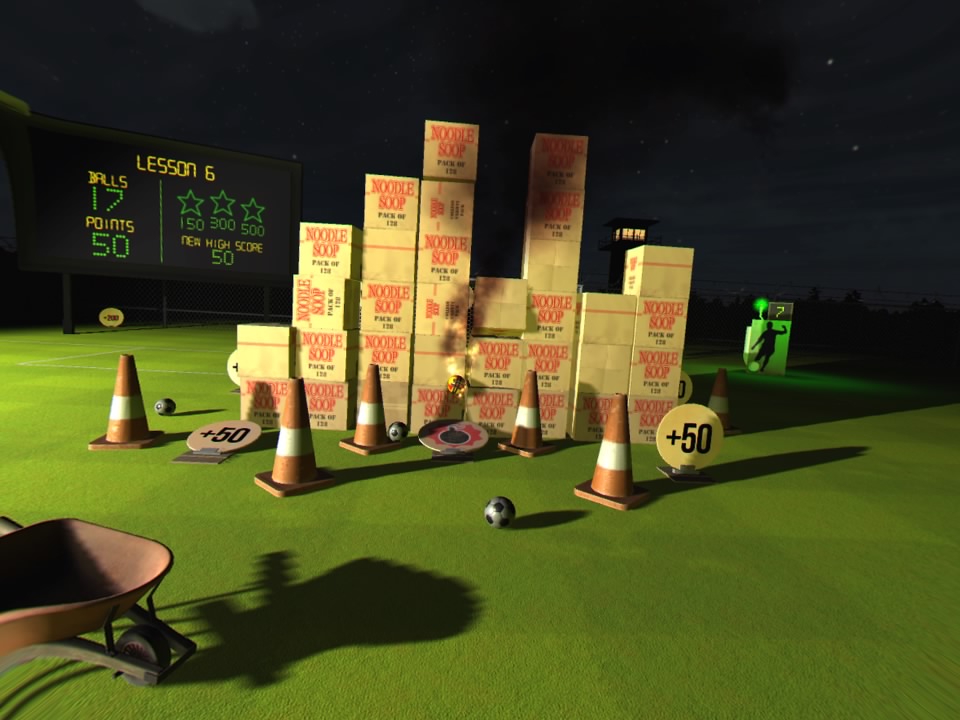 And addictive.  You see, each stage has a three star system.  Get one star and you get to move on but, if you’re anything like me, you’ll be eeking out those extra stars wherever you can.  Complete enough levels and you’ll get a more complex ‘exam’ stage where there are far more targets to hit and more complexity to the scoring.  There’s a star target before you can unlock the exams too, although these aren’t too harsh but certainly if you just one star every level, you won’t be unlocking the exams.

If that all sounds a tad samey, that’s because it is.  But, in short-ish bursts, the game totally works and it is so savagely addictive that you really can’t go wrong with it.  The pass-the-VR-unit local multiplayer certainly has all the ingredients of a great party game too.  There’s no online play though which is a shame.  A nice online of keepy-uppy would have been nice.  And ridiculous. 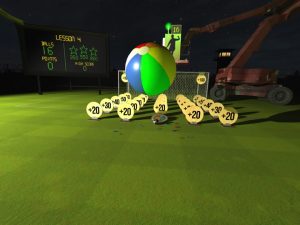 The presentation is pretty good.  Visually the game is quite plain with the only variety coming from the weird and wonderful level designs while the sound consists of basic effects but also the running chatter from the automated training recordings and the occasional live interactions from the camp instructor.  As I said earlier, these have the feel of Portal 2 with a very officious, straight-laced characterisation that is punctuated with plenty of jokes.  The running idea that the camp is not a prison (the bars on the window are just there for your safety) lends plenty of humour for example.

The game is undeniably a tad thing and has the feel of one of those old Eyetoy sports games (if you remember them) but it’s a bit of a crowd pleaser that uses the PSVR tech well.  It’s not trying to do a whole lot but what it does, it does really well making Headmaster one of the surprise hits of the PSVR launch.

Headmaster
7 Overall
Pros
+ Seriously addictive + Not just aimed at football fans + Plenty of humour + A good showcase for the PSVR
Cons
- Not much variety - Can be a bit drab visually (although not all the time) - Probably not great for your brain
Summary
Headmaster is silly, repetitive and simplistic. It's also possibly the most fun you can have with your PSVR headset, at least in short bursts. A party game that anyone can play, it takes a chance that the core concept is strong enough and pulls it off.