.hack is a franchise I’ve been aware of for a while. I believe I played a portion of the first game on the PS2 and I own a couple of the visual novels though it’s been so long since I read them that I might as well not have as far as retained knowledge goes. .hack//G.U. Last Recode is the second wave of PS2 releases bundled into one package on the PS4 plus some extras. A lot has happened in games since those days of memory cards and wired controllers though so is this worth a look? 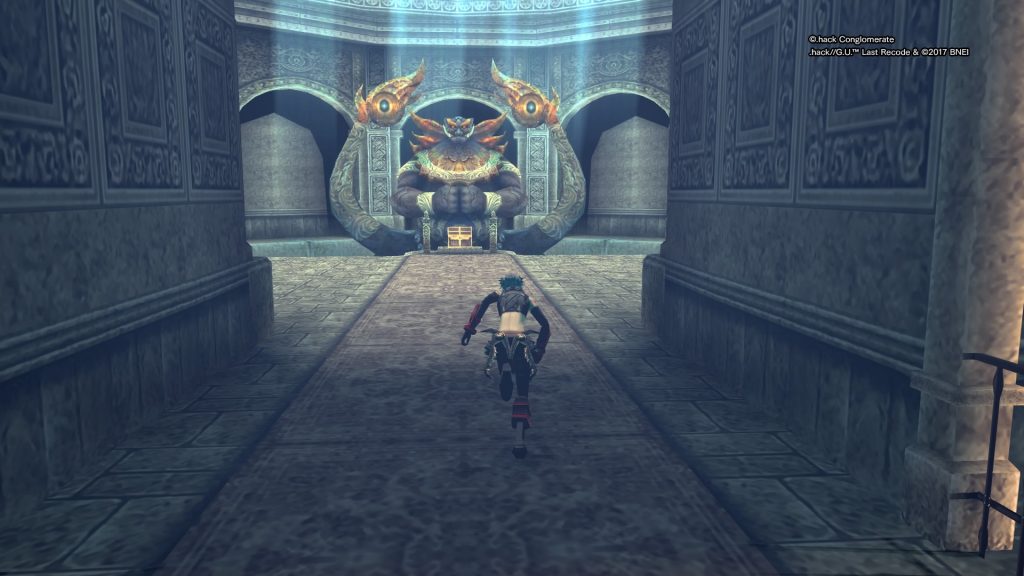 As with all the .hack fiction G.U. takes place primarily in an MMORPG called The World. You play the part of Haseo, a new player in The World R:2. As soon as he logs in he is greeted by a couple of players who show him the ropes of how to play only for them to turn on him at the end of the dungeon. They are PKs or Player Killers, people who prey on ‘noobs’ just for laughs. Haseo is saved by a mysterious stranger named Ovan and then goes on a mission to become a PKK, a Player Killer Killer. Time then jumps ahead and Haseo is indeed a renowned PKK called Terror of Death, but when searching for Tri-Edge, a character who killed his friend in game, placing her in a coma in the real world, he finds him and loses. Upon re-entering The World he discovers all his levels, skills and gear are gone. It’s back at this square one where you retake control and, with help from new friends, get to the bottom of all this.

This intro section is very cutscene heavy with a minimal amount of player input unfortunately. Combine that with reading the online forums, news sites and your emails outside of the in game game and it’s quite a slow start. Things do progress though and before long you’ll be in a rhythm of doing a story mission, leaving the game to check your emails before going back into the game to do another mission.

The stuff outside of the game is actually one of my favourite parts. Rebirth, the first episode, was released in 2006 where the internet was quite a different place to what it is now (the game is set in 2017, funnily enough) and yet it’s very recognisable. News sites have links to videos, forums discuss tactics, secrets and share fan art. About the only thing that’s not realistic is how pleasant the majority of people are to one another. Combine that with people in the game talking like they are in fact in a game and it makes for a believable scenario that I appreciated. 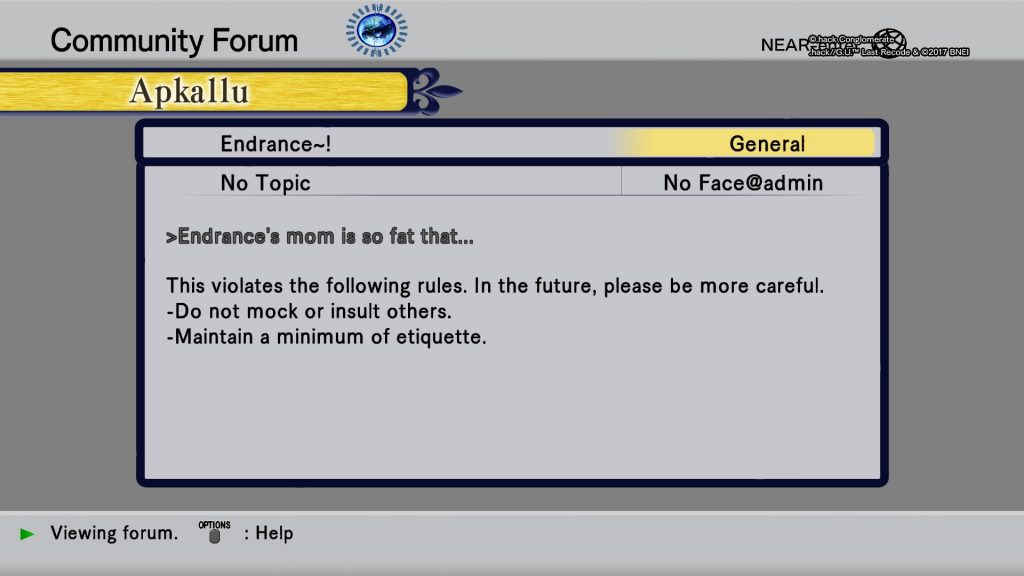 Actually playing the game is reasonably MMO like. You invite up to two friends to join you on a mission and then can enter a string of three words to create a dungeon of different style, content and difficulty. Inside the dungeon you encounter enemies that you can surprise for a free hit, once engaged you’re placed inside a battle arena and can use regular attacks, charged attacks or specials to whittle down the enemies. You can also block when you need to defend and if you stun an enemy with enough hits then you can activate a special that will grant you extra experience at the end of the fight. The battles are actually pretty repetitive but they are over quite quickly and trying to get those extra experience points at least adds a little more strategy to what could have been a simple button masher.

Outside of the fights you simply walk around the dungeon looking for a boss or the chest at the end. You are rewarded by how thorough you are so it pays to check every room, defeat every enemy and open every chest but, again, the areas do become repetitive quite quickly especially in the first episode where there are only three variations. In towns you can speak to and trade with other players, run a shop, enter an arena and buy, sell and alchemise items. Teleport points help you get around or you can ride a motorcycle, which is good as things you can interact with are spread apart with nothing in between of interest. 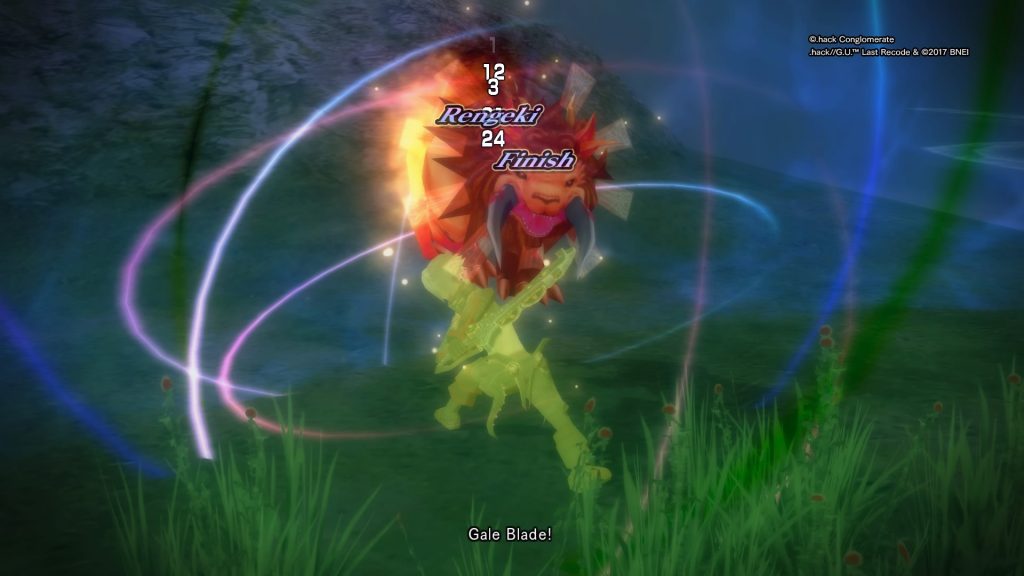 The repetitive combat and exploration combined with the updated but still obviously PS2 visuals hurt the game somewhat. The character models can look okay from afar but up close textures are incredibly blurry, mouths don’t move when speaking, in fact there’s very little acting at all. Every now and then you will get a cut away of a far more animated scene, usually a close up of a face and these look great and they blend in with the scenes surprisingly well but they are few and far between. The voice over defaults to Japanese and is pretty good, the English is old school anime voice work quality and is an acquired taste.

There are improvements elsewhere advertised though I can’t speak from experience. The frame rate is smoother, movement and combat speed have been improved and some quality of life improvements like a higher inventory cap and retry feature are smart inclusions. There is a cheat mode upon starting that lets you play each episode with a maxed out character with the best gear if you want to just blow through it, though some trophies are disabled if you do this. You can jump into whichever episode you want off the bat too, though if you go in order you can import your character from one to the next. There were only three episodes released originally and now you get a fourth, shorter episode which wraps up the story, plus a story recap of the previous games and a parody section where they take scenes from the game and put funny dialogue over the top, just for funsies. 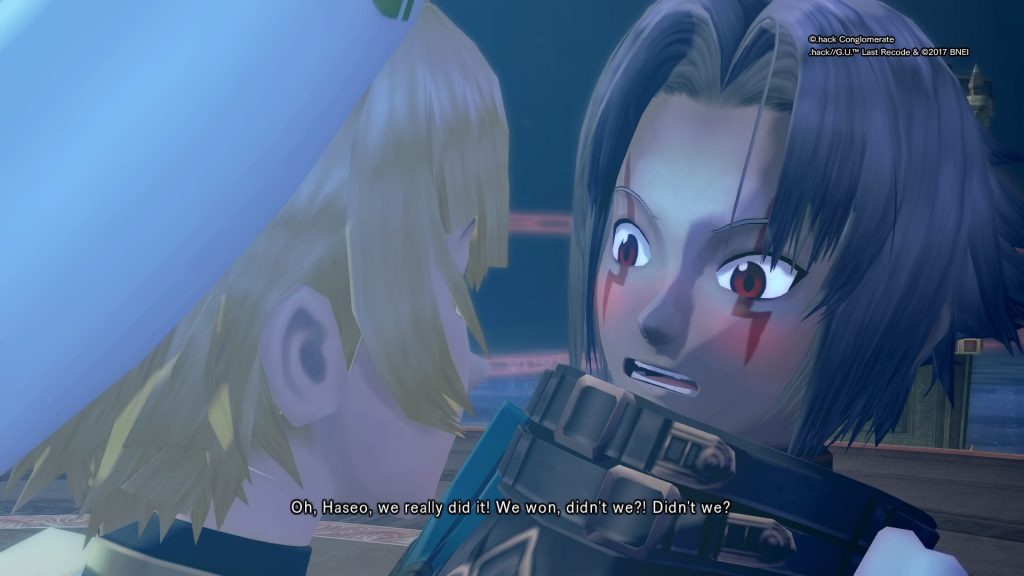 If you’re already a fan then .hack//G.U. Last Recode is a great package for you to experience some old favourites or if you want to see the conclusion in episode four. The cheat mode will let you eliminate any difficulty in seeing it through again but with the improvements playing through normally is still a valid option. If you didn’t play it first time around then there is merit in the world created, it’s quite easy to just sit and lose hours to much like a real MMO and there is something about a PS2 era JRPG which warms my heart. Definitely a product of its time, whether you can stomach that or not is up to you.

.hack//G.U. Last Recode
7 Overall
Pros
+ Fictional MMORPG is well realised
+ Four separate episodes to play through
+ Improvements make it easier to go back to
Cons
- Showing its age in many respects
- Repetitive combat and dungeon exploration
Summary
.hack//G.U. Last Recode is a generous package with the three original PS2 episodes plus a new closing chapter. The modern improvements help make it more palatable for today's tastes but there is no doubt that this still looks and plays like an old game. How much of a negative that is will depend on the player.