Every now and again a game comes along which has more than a touch of what I like to call ‘feelings’ about it. Games like Journey and Abzu are probably the poster children for this genre, games that are as much about the experience as they are about the gameplay. Oure is aiming towards this genre and only partially succeeds. 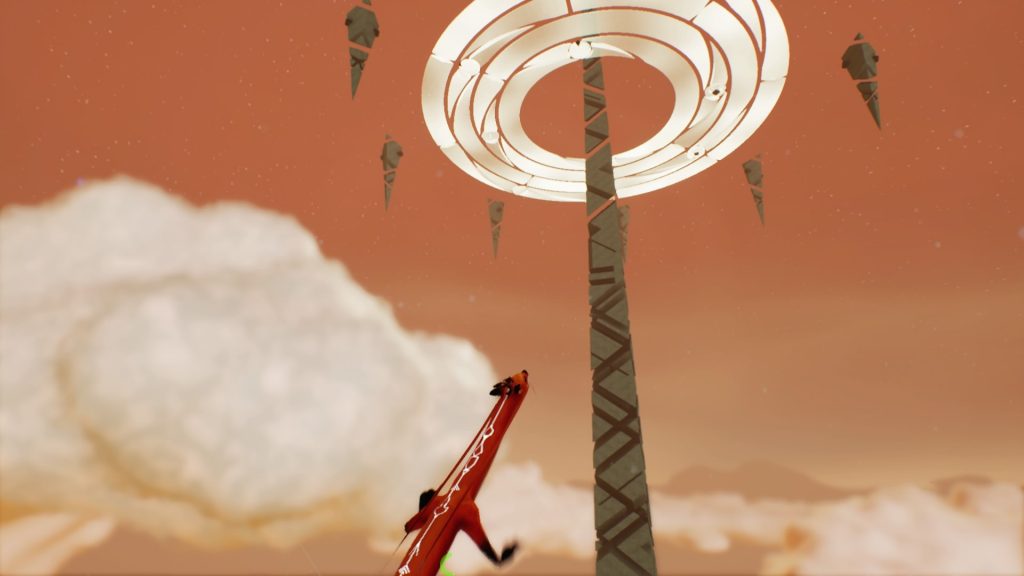 The first I, or anyone else, heard of Oure was when it was announced and simultaneously released during the Sony Paris Games Week. I can fully understand why this was chosen for this announcement as it looks the part.  With gorgeously dreamy cloudscapes and a lithe red dragon wheeling around this looks exactly like the kind of indie hit to get the internet talking.

Upon starting Oure  I was greeted with a bit of a scene setting story which explains something about a world in peril and a little boy who is the only hope of salvation. To be honest I didn’t fully grasp what was happening and this was driven home some more when I controlled a boy to jump off a platform and turn into a dragon.  Not understanding the plot doesn’t mean I couldn’t enjoy the game though. 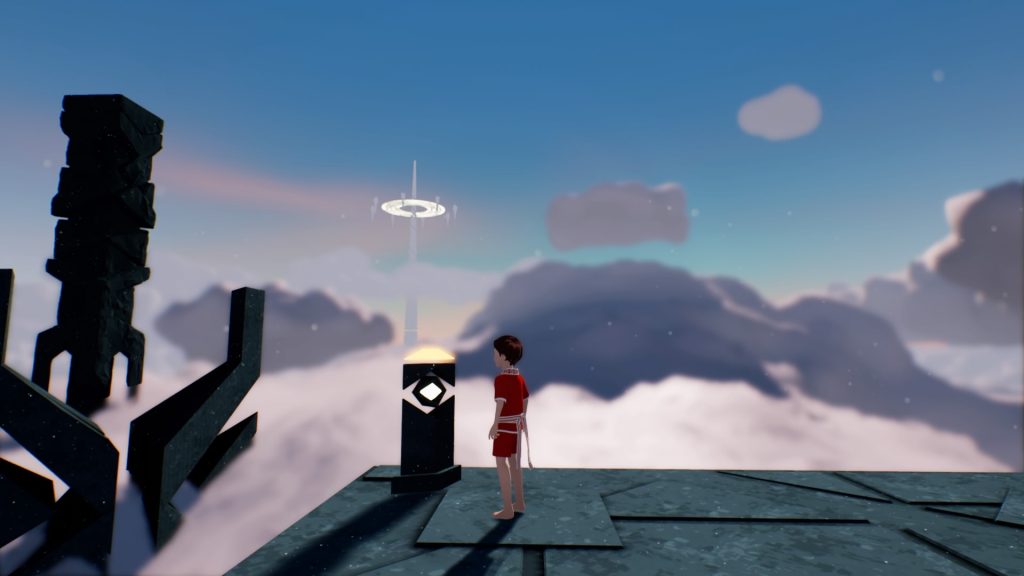 As the dragon you can fly around the clouds collecting blue orbs and just generally chilling out.  The right trigger let’s you climb, the left descend and the X button lets you accelerate.  All of these actions are governed by your stamina which is represented by the tattoo on your back. Control is wonderfully easy going, with no urgency or real peril. If you play the game at its own speed things are enjoyable and relaxing.

If you try to speed through the game, trying to get accurate manoeuvres and maximise your stamina consumption you’ll likely be frustrated. Oure works best at a slow carefree pace, and it is here that some substantial control issues are most easily ignored. Given the floaty nature of the dragon trying to wrestle any kind of precision out of the beast is near impossible. Add to this a camera which regularly struggles to fully frame the action, often getting stuck in the clouds, and Oure can be a frustrating experience. 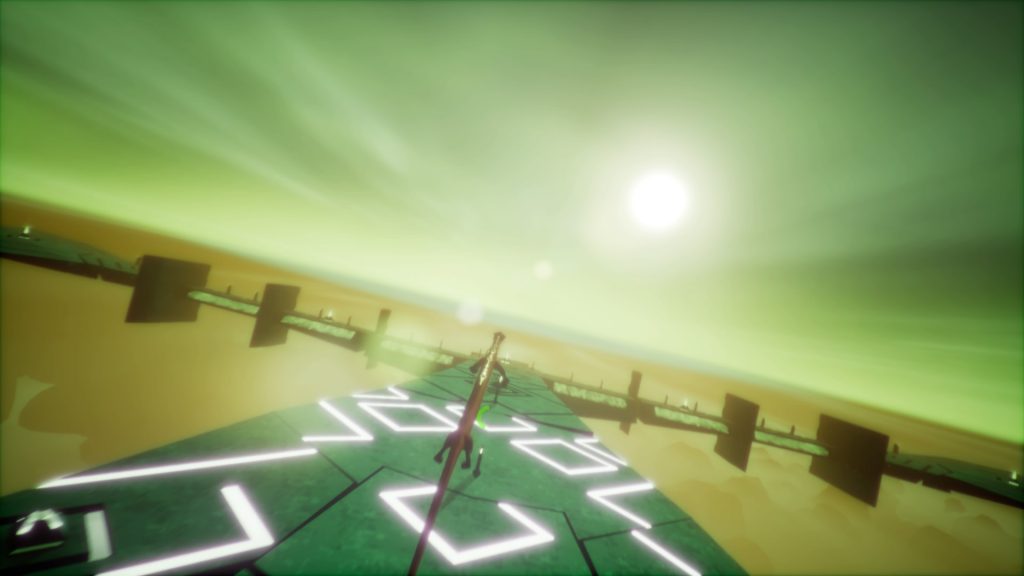 It is a shame the controls aren’t that precise as you’ll be needing a fair bit of precision when it comes to tackling the eight titans. These titans are massive beasts which need to be healed by flying your dragon over them and pulling pins from their backs. These elements are puzzle based and rather fun to play. It kind of feels like a reverse Shadow of the Colossus as you are crawling all over the titans saving rather than killing them.

As fun as these titan sections are to compete they are again made more frustrating by the imprecise controls and dodgy camera.  This is a massive shame as what should have been the centre point of the game just ends up being a bit annoying.

Before you can get to the titans though you need to find them. They are hidden away in the world and need to be summoned through activating pillars scattered around. Given the lack of any kind of map or instructions the only way to locate these pillars is by spinning round and sending out a kind of sonar pulse which will temporarily highlight places of interest including, some of the more than 750, collectibles. There is a load of stuff to collect in Oure and many of these aren’t apparent from the start. If you see something standing out of the clouds the chances are you can activate it somehow and get a collectible orb. The way these puzzles aren’t spelled out and rely on your own inquisitiveness is a wonderful example of game design and it never felt like a drag collecting more orbs. 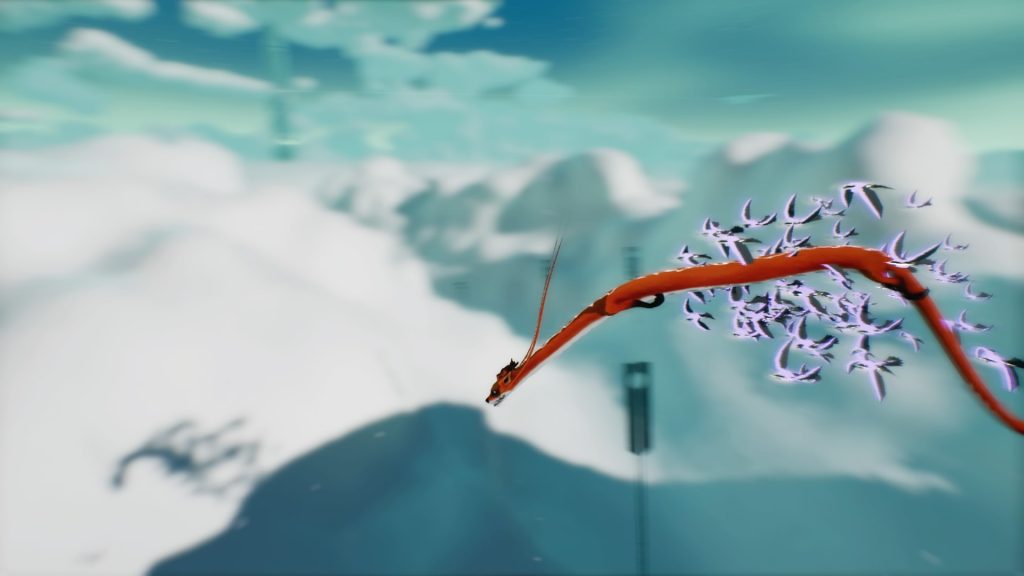 Oure is a mixed bag of a game. The overall experience of playing it is a tug of war between beautiful dreamy vistas and frustrating controls and camera issues. Whilst it may not reach the critical heights of Journey there is still a lot to like here, and anyway I though Journey was rubbish.

Oure
7 Overall
Pros
+ Great dreamy visuals.
+ The titan puzzles are interestingly realised.
+ Easy game to just chill out to.
Cons
- Dodgy imprecise controls actively frustrate the gameplay.
- Camera has a tendency to get lost in the clouds.
- The story never really grabbed me.
Summary
Oure is a mixed bag of a game. The overall experience of playing it is a tug of war between beautiful dreamy vistas and frustrating controls and camera issues. If you're willing to just go with the flow and get used to these issues there is a lot to like here, but if you get frustrated by imprecise controls this isn't for you.