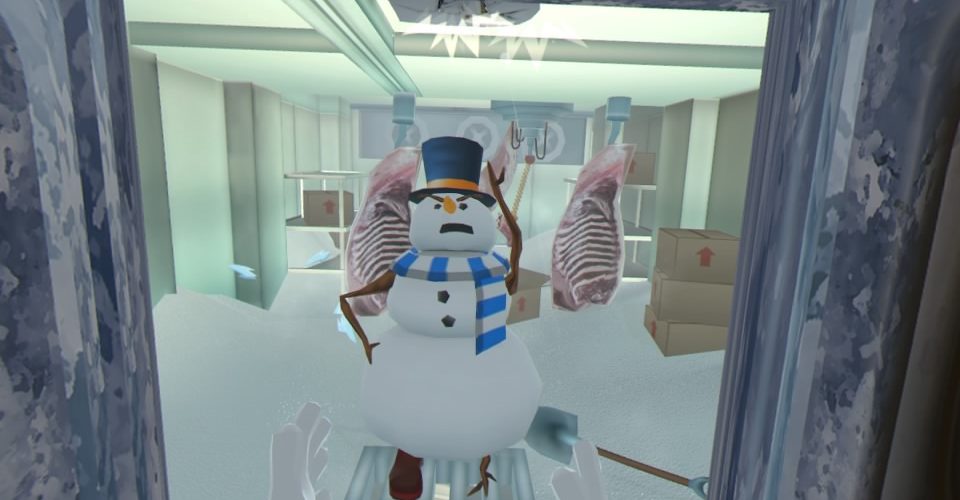 Floor Plan from Turbo Button is a VR game that isn’t a shooting gallery. That’s probably enough to get you interested but also know that it’s only £5 and you never leave the elevator you start in. 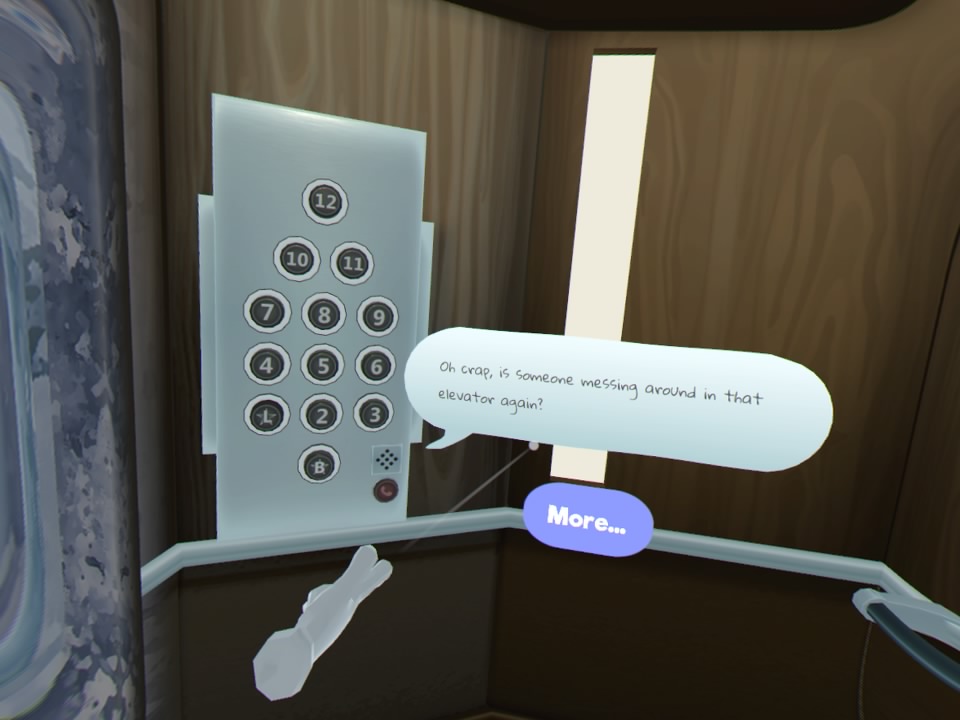 button to grab and use items. Both work very well, but if you’re pointing with your face then you’ll need a wider range of movement. There is a disconnect when using items however, this isn’t one of those games where simply messing with different things is fun. You click to use stuff and it does it automatically, you won’t be turning a key in a lock for example, it’ll just happen.

As mentioned you start in an elevator, the door is open and a greyscale room is in front of you with a fireplace burning and gramophone playing. There is little to interact with though so a quick glance around shows one button with a ’12’ on it – pressing it takes you to floor twelve. As the doors open a mannequin, half dressed in a space suit stands in front of you with a top on the floor. Picking up the top and placing it on the mannequin reveals a coffee cup and some more floors to explore. Boots and a helmet are still missing so dressing this mannequin fully is obviously the main goal and that coffee cup is going to help you do it. 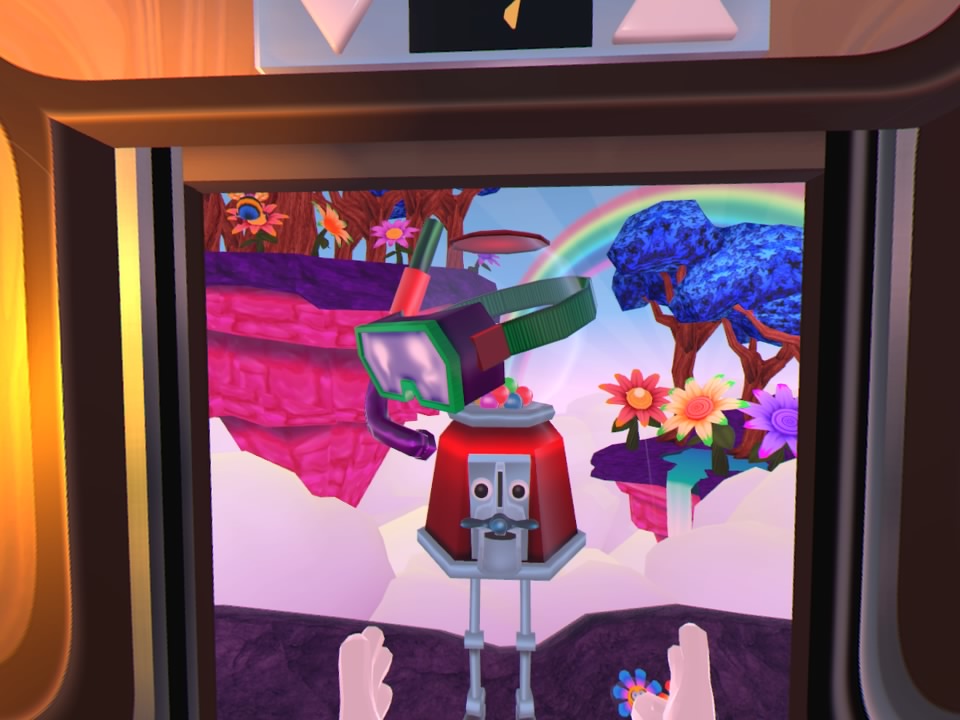 Jumping between floors to explore them and see what you can do is the entire game. You’ve got a coffee mug, what can you do with it? Some actions will help, some will just be for fun, some are just plain wrong. Figure out what to do and you may get another item to use elsewhere or perhaps the change you’ve made on one floor will have an impact on another floor. Floor six is above floor five and so on so there are times when a major change to one may move things along on another. The game doesn’t give you too much to explore at a time so keeping track of what you can do and what may be the next course of action isn’t too difficult.

If you do get stumped there is an assistance button on the elevator which will give you a hint or two to point you in the right direction if you feel you need it. There was one point where I wasn’t sure what to do and the hint did help me out but obviously the success of beating a puzzle on your own should be reward enough to stop you abusing this feature too much. 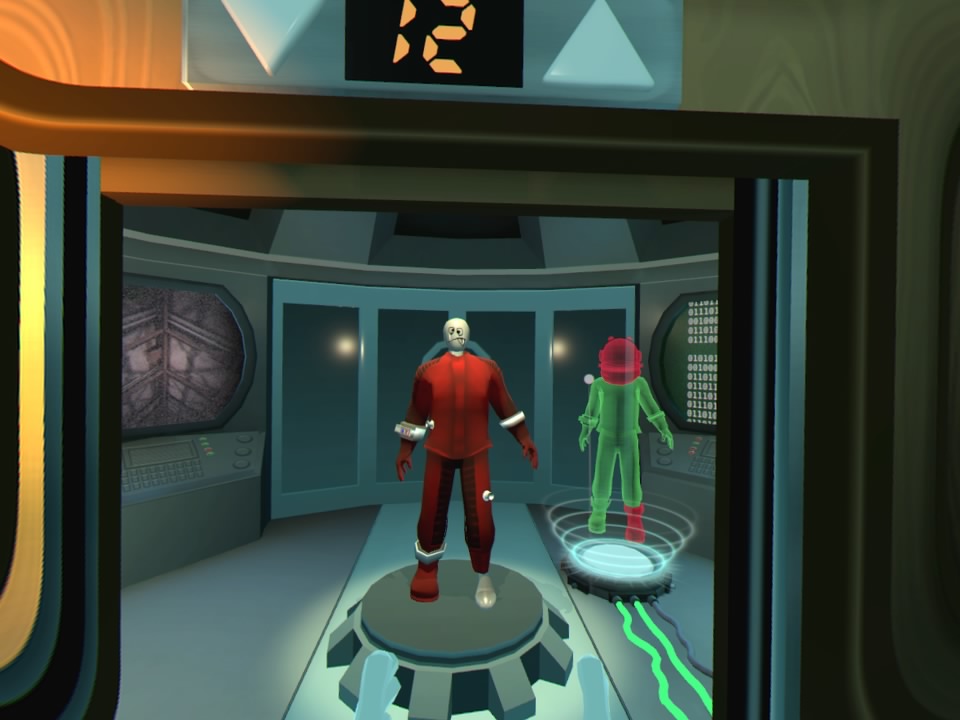 As you get more items of clothing for the mannequin more floors open up for you to explore, but the game isn’t particularly long. I completed my first run through in forty-seven minutes according to the results screen. A quick look at the trophy list before starting a new game and I’d had them all unlocked in probably just over an hour (including one for beating the entire game in under ten minutes), no platinum.

As I mentioned in the first paragraph though it is only £5 (less in this launch period for PS+ members) which I think is a fair price for a fun if over too soon experience. Each floor is unique and has quirky, colourful characters to interact with which pop out from the mundanity of the lift you occupy. The controls feel natural and the puzzles start off quite simple but can have you scratching your head at times. It is not going to satisfy those calling for ‘real’ games in VR but it’s not advertised as such. 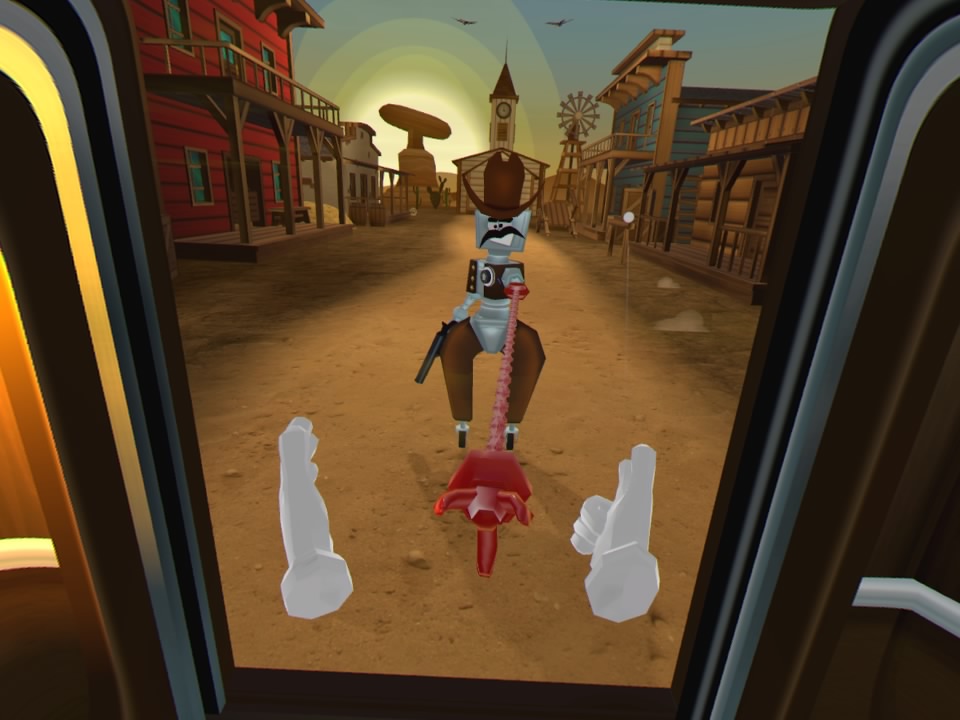 Floor Plan is a fun little experience which brings point-and-click gameplay to PSVR with a simple charm that doesn’t push the technology too hard. Know what you’re getting into and you’ll have a fun, but brief, time. Possibly another game to show to VR virgins as there is little movement and it is easy to understand.

Floor Plan
6 Overall
Pros
+ A good range of point-and-click style puzzles
+ A variety of environments and characters
+ There's a charm to everything
+ Works within the technology's limits
Cons
- Very short
- Not as tactile as some VR games
Summary
Floor Plan is a fun little experience which brings point-and-click gameplay to PSVR with a simple charm that doesn't push the technology too hard. Know what you're getting into and you'll have a fun, but brief, time.