Death Road To Canada had us interested from the outset. Retro-styled, zombies and rogue-like mechanics? Sold!  The game is presented in a cute pixel art style which initially seems rather at odds with the subject matter at hand. After a while though it makes no odds and you’ll be cleaving undead brains all over the place.

The premise for the game is that the USA has found itself in the midst of yet another zombie outbreak. You start in Florida and have fifteen days to drive through procedurally generated roads to safety north of the border. Not too far off reality then we suppose, except instead of zombies it’s an orange shitgoblin and his minions that’re the main threat in the US at present.

You start the game by choosing a lead character and a buddy. You can randomly generate their attributes and traits such as their familiarity with guns or ability to heal friends. 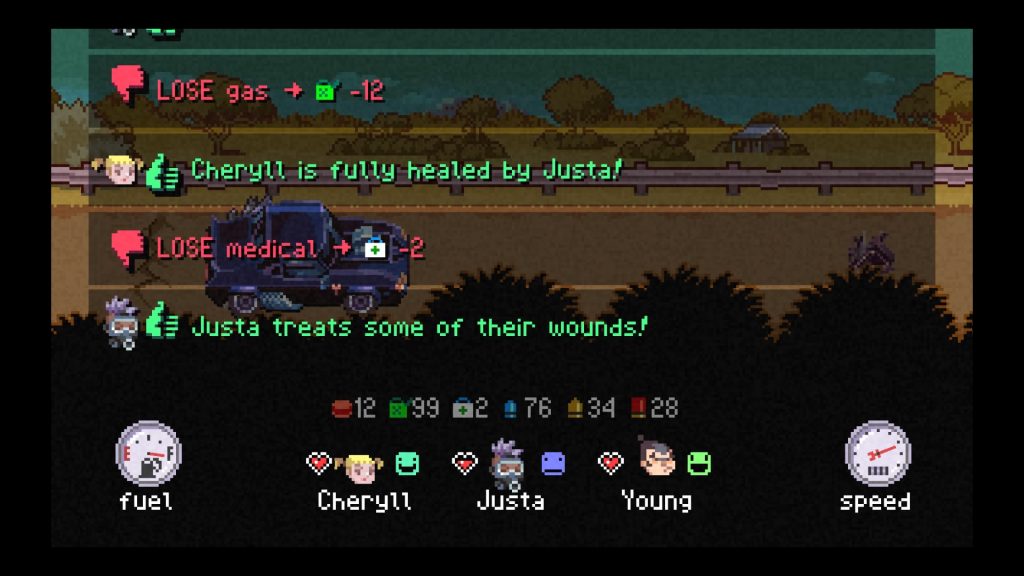 After a one-shot tutorial mode you start driving with eight units of food and 100 fuel, but that’ll only get you so far and before too long you’ll be thrown into the fray to resupply.

Your drive north is nothing if not uneventful. You’ll stop frequently, generally to resupply, rescue a potential new party member or arbitrarily to fight off a horde until such time as its deemed safe for you to hit the road again.

If you wade into this game in typical videogame style hitting all the zombies you can, you’ll die quickly. Each hit takes a little of your stamina so you can be overwhelmed quickly if you go in fists flying. Often the best course of action is to avoid a fight altogether and pick up resources instead, they being vital to your ongoing survival much more than any body count.

The game’s three key commodities are food, fuel and medicine. Food keeps your strength, and hence morale, up. Fuel, strangely enough, is essential to keep your vehicle going. Finally, medicine is used by characters in your party to patch up any injuries.

Going back to the stamina aspect, you’re often better off with firearms if you have the ammunition. The bonus being you’re only really constrained by your ammo count rather than your limited physical ability. 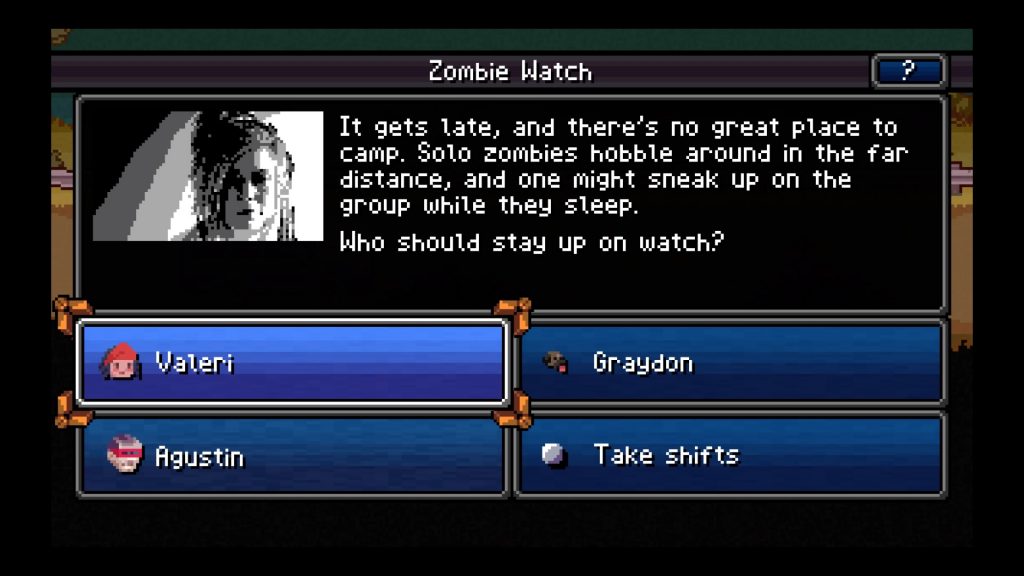 As you travel down America’s highways you’ll meet potential new companions, some cookie cutter templates, the others pop culture references, some more subtle than others.  You can have up to four human and animal party members at any one time and the interchanges between your fellow travellers affect your ongoing progress. Sometimes one companion will pick fights and demand a group member be ejected with immediate effect, it’s often better to boot them as a disruptive influence ’cause who really needs that sort of bullshit?

The game doesn’t take itself at all seriously, there’s a humorous undercurrent throughout the entire game, frequently amusing and regularly scatological (there’s a trophy for opening 100 toilets). You’ll likely find yourself laughing out loud on several occasions. Some situations play out differently and to great comic effect depending on the characters in your party too. 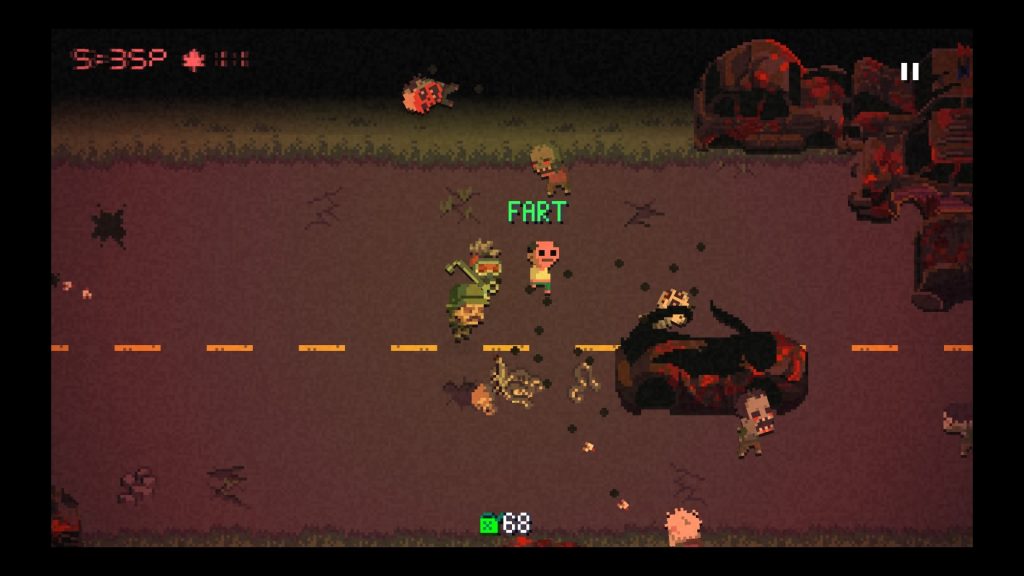 If you have the opportunity to stop at a trader camp to swap resources for fuel, food or weapons, it’s generally a good idea to do so even if you don’t have anything to swap as you’ll often find items to loot otherwise in the general environment.

The regularly sparse nature of supplies in the zombie wasteland will lead to your car running out of fuel or your groups’ morale plummeting due to no food and increasing hunger. If your car runs out of fuel, you’ll be reduced to running down the road until you find another vehicle. In the meantime you’ll be much more vulnerable to marauding bandits or getting lost, this reviewer actually lost three party members and got a game over screen due to some bad luck from the RNG in this gameplay phase. It can feel a bit harsh on occasion.

If you’re a connoisseur of classic zombie cinema, you’ll know that being out at night with brainfeeders isn’t a good thing under any circumstances. Death Road plays on this trope to good effect, horde density increasing in volume and aggressiveness the darker it gets. A stylistic touch we could do without is for this to be a factor in otherwise well-lit internal locations, it’s a bit odd for the time of day to have an effect on the light conditions indoors. 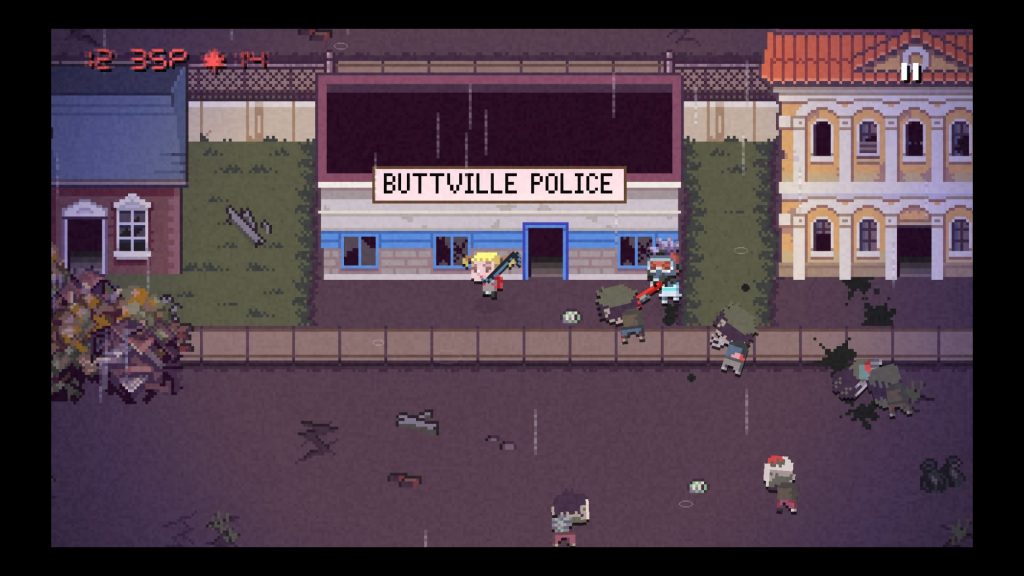 In a similar manner to another exemplar of the genre, Rogue Legacy, you can upgrade traits and perks to make future attempts potentially easier. For example making the Gungineer perk more effective or ammo pickups yielding more shells than the default. Similar to Legacy, you’ll find yourself getting much closer to your goal due to your own ability increasing as well as the perk load out you’re using.

Despite all that instant death sometimes comes despite your best efforts, sometimes even in an apparently innocuous supply run early on in the game. It can be especially galling when you’re close to finally reaching apparent safety, one teeth grindingly close wipe coming with three days remaining when we had a full tank of petrol and loads of food, our undoing being a large aggressive horde that kept coming despite our unloading our shotgun towards rapidly advancing zombies. You’re going to die a lot. And die again.

Yet before you know it, you’ll be restarting for another go and all of sudden it’ll be half one in the morning and you’ll have eyes like pissholes in the snow the next day, But you won’t care as the core gameplay hook here is just so compulsive you’ll feel driven to keep playing. 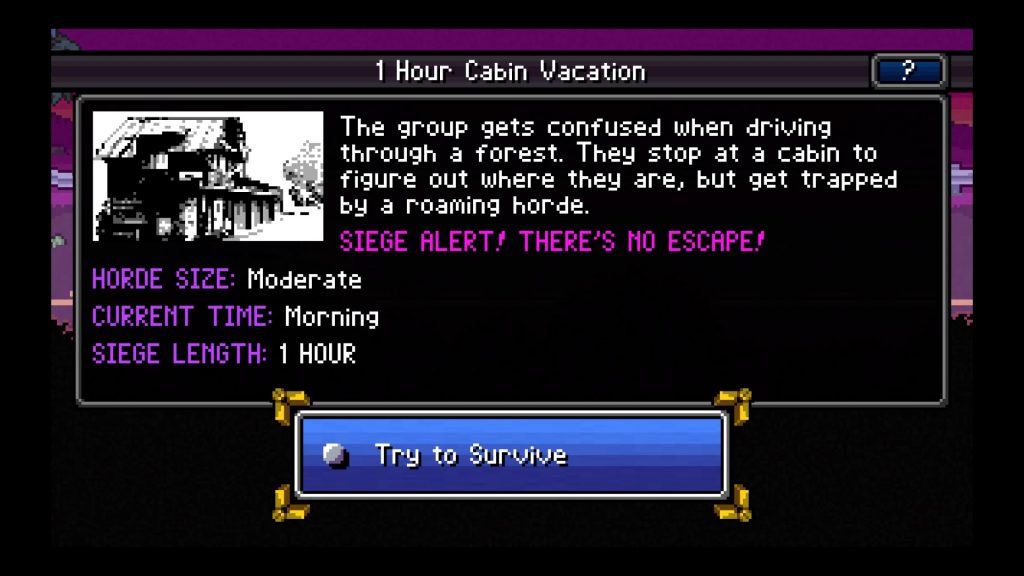 It’s just like being a fan of a mediocre football team; you know your team is going to get dicked again and again, week in, week out. But you keep watching them despite everything. DRTC inspires that same level of hope and devotion.

Finally, the sound effects and music do their job brilliantly, I found myself leaving the game running at the game over screen on several occasions just because I liked the tunes.

Death Road To Canada is a brilliant addition to the rogue-like pantheon, you should be playing it right now. It’s excellent. At the time of writing we’d just got within three days to the land of the maple leaf before we succumbed to the hordes yet again, the only thing stopping us having another go was writing this review.

Death Road To Canada
9 Overall
Pros
+Often funny
+Compulsive just one more go gameplay
+Excellent graphical style and catchy music that doesn't get annoying
+Varied strategies for success
Cons
-Death can sometimes seem to come out of nowhere snatching defeat from the jaws of victory
-Some randomly available party members can be worse than useless
-Runs occasionally never get going due to sparse resources at the outset
-RNG can lead to rapid wipes despite your best efforts, can feel a little harsh
Summary
A fantastic procedurally generated zombie road trip that you'll want to play again and again. Often funny, moreso if you like poop jokes. Highly recommended.