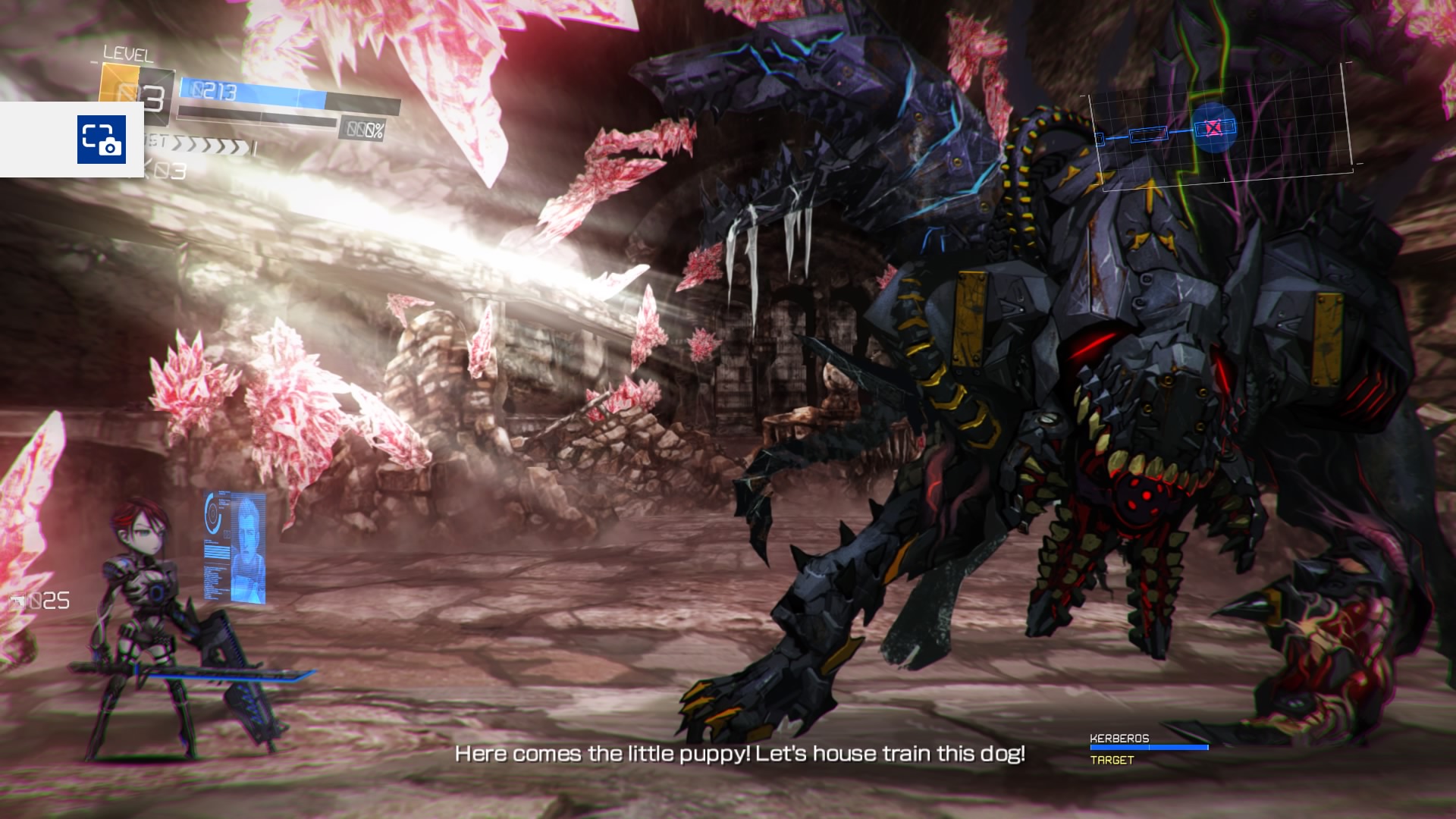 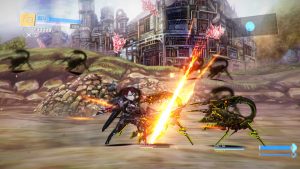 Earth’s Dawn is a 2D hack ‘n’ slash with a strong loot element for the PS4. Based around a group of super soldiers who are Earth’s last stand against an alien invasion the story doesn’t ultimately matter but there are cutscenes introducing the main missions. The question is do you like repeating missions in the same area over and over again to get better loot, level up and earn new skills?

Mercenary Kings was released on the PS4 a couple of years ago and was a fun if repetitive romp through a hand full of levels. It’s a good comparison point for Earth’s Dawn as the structure is very similar. There are a few large levels which house multiple smaller missions. There are main story missions which will move the story on and far more ‘free missions’ which you can complete to strengthen your character and gain more materials.

You will learn the level layouts as despite their size you’ll be seeing the same areas over and over. You have a map that builds as you explore and the game will put a marker where you need to go in order to complete your current mission. Generally the story missions will involve moving through a level before beating a boss but free missions can range from collecting a certain amount of an item, defeating a set number of enemies or even just getting to a location against a time limit.

Combat takes the form of pressing square and triangle to use your left and right hand weapon to do combos. It doesn’t feel quite as good as the recent Odin Sphere release but you have got launchers, mid air combos, throws, finishers and multiple dashes you can string together to look pretty stylish whilst fighting. As you level up and progress you unlock different styles like being able to dual wield weapons, you unlock a super meter which you build up and can initiate for a brief period of strength and some very useful moves like being able to deflect missiles or take no damage whilst running. 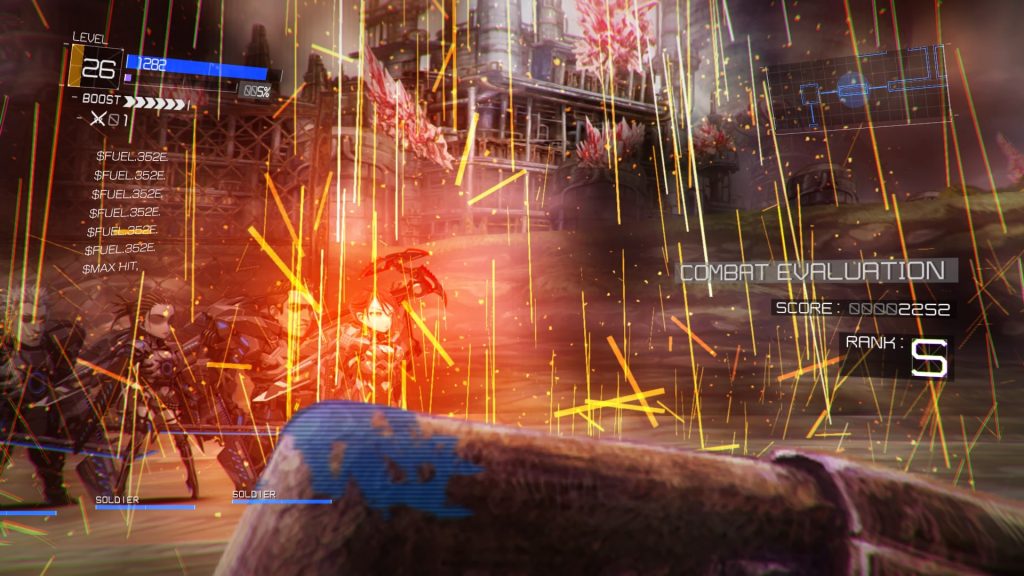 You are rated from S-E depending on how well you do and this can effect your rewards. From completing a mission you will get set materials which you can use for crafting, but on top of that you can also gain stat boosts. If you complete a level with an S-rank you may get a resistance to ice which you can equip for example, whilst simply completing a level will get you HP+10 or something similar. The game encourages repeat plays of the same mission as you will be able to get that bonus two or three times depending on the mission.

As you complete missions a countdown ticks down and when it reaches zero you must face a counter mission which is the story mission. You’re forced to take this mission on but if you fail then you just go back to grinding out other missions and can attempt that mission again at your leisure. It’s an odd addition as initially it seems like you must complete this right this instant but they are generally quite a bit harder and so it’s very rare to complete it on the first attempt and so you go back to playing other missions until you are ready.

Completing the counter mission usually unlocks new items which you can build. All the equipment in the game has to be crafted from the materials you find or are awarded in missions. You can craft swords, guns, broadswords and bows which each have different play styles. On top of that you have to craft your armour, any accessories you want to use and appearance items for your character.

You can choose between a male and female character at the start and you can craft glasses, different looking armours and hats, none of which alter your stats and are just there to change the look of your character. It’s a welcome feature though the inability to preview what you’re making means you could be wasting materials on something that you think looks terrible and as, unlike Mercenary Kings, this is strictly a single player game your appearance doesn’t actually matter that much. 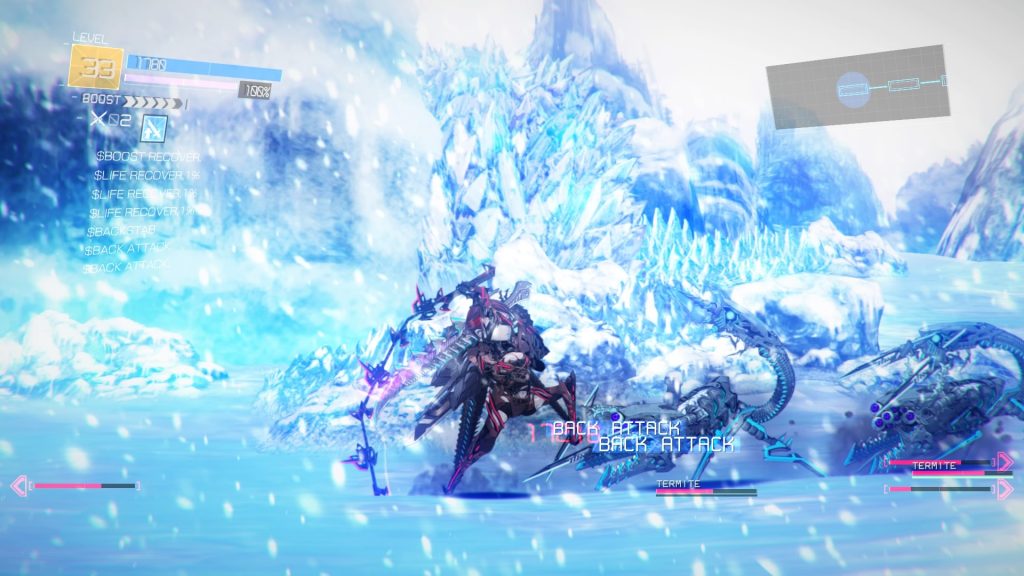 The skills you unlock by completing specific missions need to be applied on a massive skill tree. You are limited to how many skill you can equip but this too can be upgraded by collecting orbs in the levels. I was generally ahead of the curve and able to apply everything I unlocked that I wanted but it’s an appreciated level of customisation.

Visually the game has been compared to Vanillaware’s work and although it is of a similar style it’s not up to that standard. It’s less colourful which suits the setting but the character animation and drawings are a notch or two below the excellent work from Vanillaware. Which doesn’t mean it’s ugly as that is a very high standard to be compared to and I like how well the backgrounds blur the line between 3D and 2D. 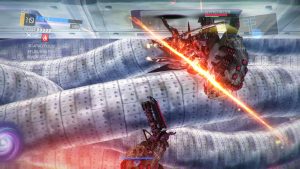 The bite sized mission structure is fun and you’ll find yourself doing more than you anticipated as you’re constantly unlocking more skills and so you always feel like you’re making progress. However you are fighting the same enemies over and over again, in the same stages and quite often doing exactly the same missions over and over again. How much repetition you can stomach will be up to you but I’ve found the gameplay loop quite addictive and have enjoyed my time taking Earth back.

Earth's Dawn
7 Overall
Pros
+ Bite sized missions + Lots of useful skills to unlock + Weapon upgrades feel like upgrades
Cons
- Repetition is the name of the game - Story missions bring a spike in difficulty
Summary
Repetitive gameplay is the only thing holding back Earth's Dawn but it is a pretty major part of the equation. The missions reward you well and it always feels like you're making progress, but the lack of variety may be a deal breaker for some.