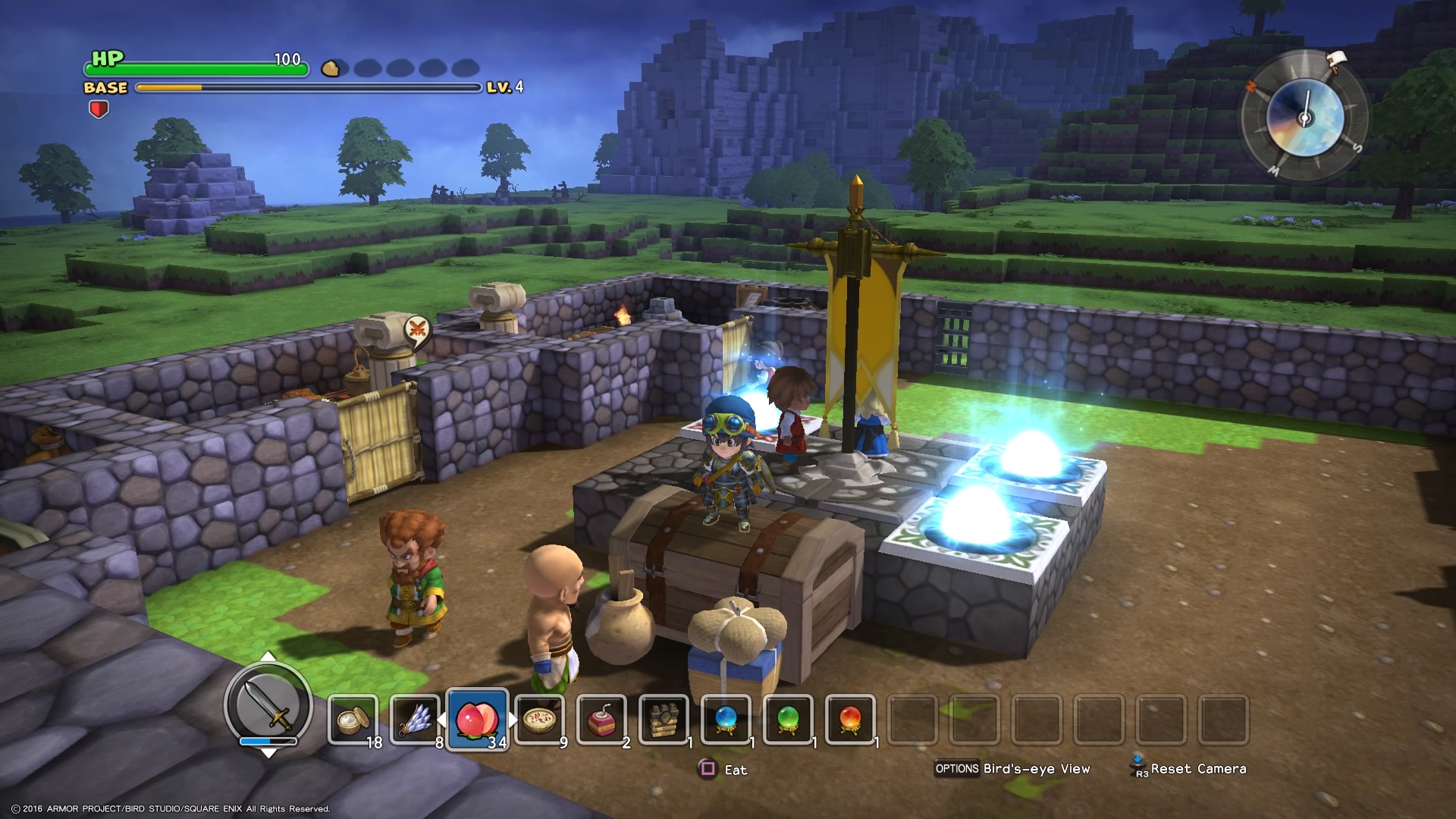 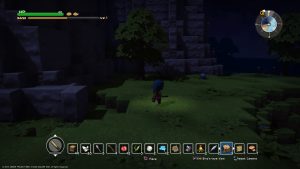 A quick glance at Dragon Quest Builders may have you thinking this is a Minecraft rip off, and you wouldn’t be completely wrong. Rip-off would be a strong way of phrasing it as although the world is built up of lots of blocks that you can destroy, collect and then use to build it actually brings many new twists to the table.

Apparently this takes place after an optional ending to the very first Dragon Quest game (which I’ve never played) where the big bad has taken over the world and monsters roam freely. Humans have forgotten how to build and so towns no longer exist and those humans who do remain are scattered. That is until your character arrives. S/he doesn’t have any memories but is informed by a voice from above that s/he is The Builder, a fabled hero who can build things which in this world is something special.

When you start you can choose a name, to be a male or female and then you can choose skin colour and hair colour but that’s it. Then after a brief tutorial you’re whisked off to the ruins of a town. You’re given a flag to place in a specific spot and that attracts new residents as the town develops. Although you can just wander off and find materials and start building the town’s residents will give you quests which you’ll have to complete to progress.

The early quests will help you with understanding how the game works as you’re told where to get materials and how to build simple bedrooms, kitchens and workshops. As you build within the set boundaries your town level goes up but this is based on what items are in a room and what the walls and such are made of, the appearance doesn’t really matter so it will be down to your preferences whether you have everything neat and tidy with roofs on or if you just do the basics. 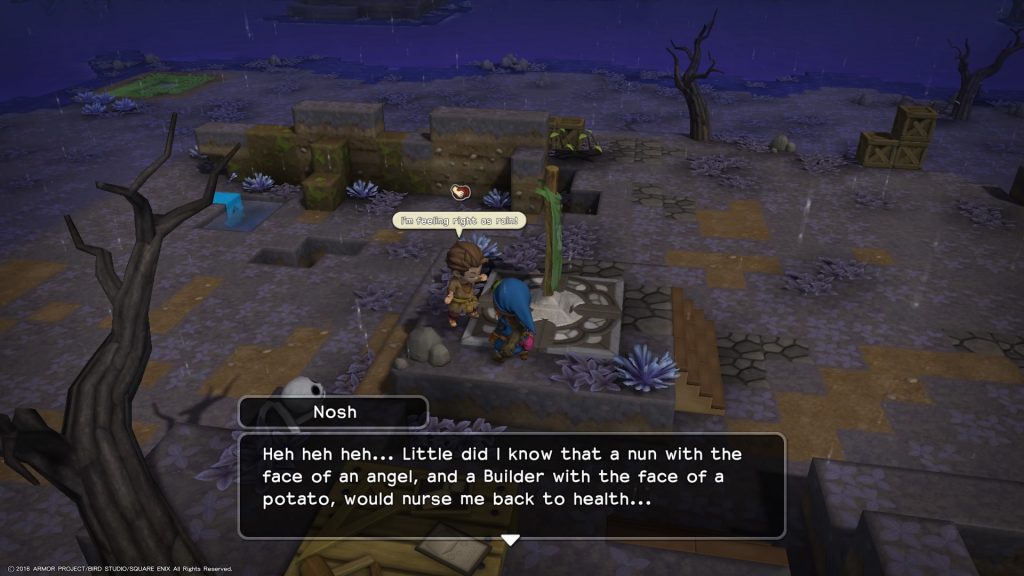 Monsters will sometimes attack the town, either as part of a quest or at random which your townspeople will help defend. The combat is very simple in that you just walk towards the thing you want to hit and press the triangle button. Most fights involve getting a hit or two in then running away before you take a hit and then getting back in to land some more hits. It’s pretty basic but you can build stronger weapons and armour as you find stronger materials. The Builder doesn’t level up in the traditional RPG sense.

As you explore the map and find new materials the game will tell you what new things you can build with them. You can’t choose what to combine and see what happens, you have a list of what you can make and if you have the materials you just choose whether you want to make one or the maximum amount with the materials you have (you can’t choose to make just three, for example). When designing rooms you can do a bit of experimentation. The game will tell you basic designs but putting different items in rooms will have them become classified as something else, so a bedroom can become a private bedroom or an inn.

The game is split into chapters with each chapter concentrating on a specific town. As you progress through the quests you discover portals to different areas with different materials and enemies and each chapter culminates in a big boss battle which will use something you’ve built to help take them down. Completing the chapter unlocks a new town which has different residents and locales and starts you from scratch, having to re-collect all the materials and equipment all over again. It doesn’t take long to get up and running once you know how but going from a powerful weapon to a basic one can be a bummer.

Items degrade over time so you’ll have to build new weapons and armour and The Builder gets hungry so you’ll need to carry a supply of food with you at all times. Thankfully fairly early on you gain the ability to create the Colossal Coffer which basically acts as an inventory enhancer. Initially you can only carry so much but with the Coffer anything you pick up that doesn’t fit in your pocket goes automatically to the Coffer and you can also transfer stuff from the Coffer to your character at any time from anywhere, like magic. Exploring would have been a much bigger chore without this but with it you can scavenge for materials to your heart’s content. 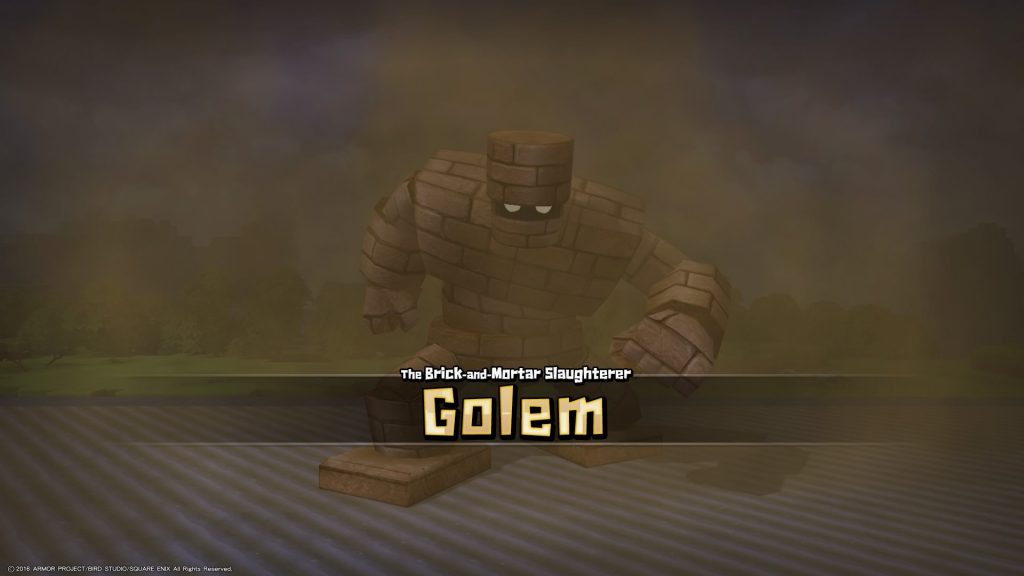 Upon completing the first chapter you unlock Terra Incognita which is basically your free play mode. Here you can build whatever you want and you can share your designs with players online, though other players can’t enter your world. For those who prefer the looser structure of Minecraft rather than the missions and story then this is where you’ll be playing but it’s not available from the off, as I said.

As usual for Dragon Quest games Akira Toriyama supplies the character designs and on the whole the game looks very nice. All the landscapes are made up of blocks but the draw distance is excellent and the enemies have a lot of character. The soundtrack is great although you’ll hear a lot of the same tracks as you explore the wilderness. Load times are very swift which is really noticeable after recently playing Deus Ex: Mankind Divided and XCOM 2.

Overall the game is a very relaxed affair. If you die you drop some items but can go back and pick them up and it’s fun to explore new areas for new materials or finding hidden quests out in the world. Upon completing a chapter a list of chapter challenges will appear which you can continue to try. One is always time based which is an odd choice as I then went from taking my time and exploring everything on chapter one, thus failing the time challenge and so needing to start the chapter over, to rushing through all the quests as fast as I could so that I wouldn’t have to repeat the chapter again just for the time challenge. It’s a strange addition to an otherwise rather sedate game.

Other oversights are the lack of any map which meant I would get lost on occasion after a long expedition and as I mentioned earlier the lack of ability to craft a specific number of items. I also had a few occurrences of rooms not being classified properly but that didn’t stop me progressing in the game. 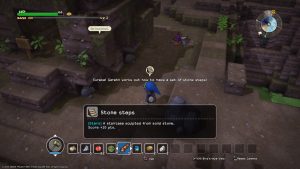 Dragon Quest Builders is an excellent game. I can’t compare it directly to Minecraft as I’m one of the few people on the planet not to have spent much time with it, but if you want a more structured version of that then that’s exactly what you get here. If that’s not what you want then the Terra Incognita mode will probably offer you something but you will have to progress in the main game before unlocking it. What I do know is that Dragon Quest Builders is a very well made game with enough new ideas to make it worthwhile.

Dragon Quest Builders
8 Overall
Pros
+ A fun spin on the Minecraft formula + Great presentation all round + Plenty to do and a few options on how to do it
Cons
- Combat is a bit simple - Could do with a map - Can't specify how much of something you want to build
Summary
Similar to Minecraft it may be but Dragon Quest Builders is a great game in its own right. The quest structure works as both a tutorial and a reason for building, whilst those who prefer to just get on with it have the Terra Incognita mode to turn to. A very well made game all round that should appeal to both sets of fans.