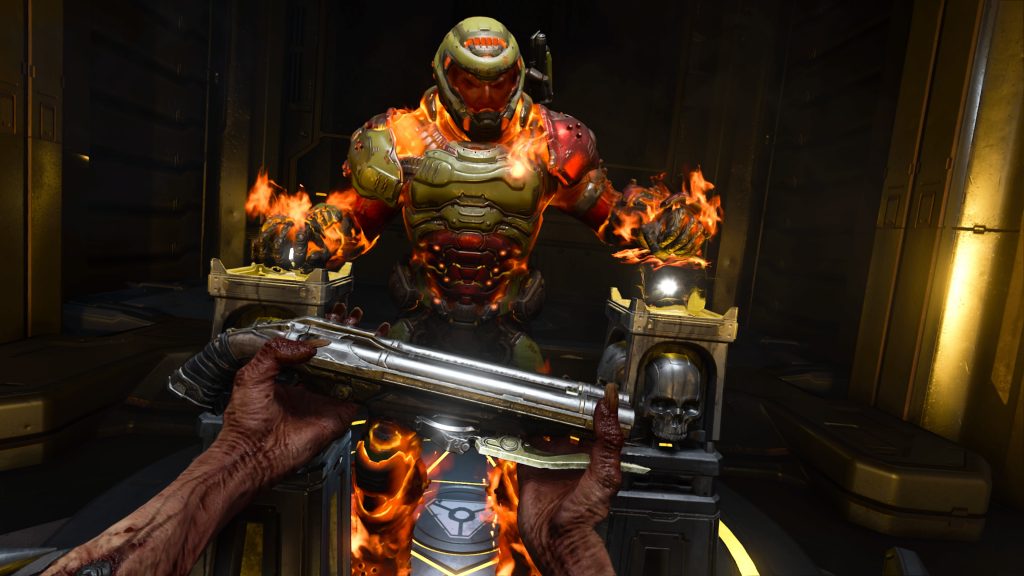 It’s good to be back.

There was a lot to love about Doom 2016. From the way you started out the game on a slab of stone only to immediately massacre the denizens of hell, to the loving recreation of hell spawn that dare to get in your way and the unmistakable “no fucks given” attitude to the story; Doom 2016 was a masterclass in retro shooter renovation. What made the 2016 reboot feel so fresh was odd however, it didn’t do too much of the unexpected. Instead, it stuck to the guns that made the 1993 title a classic, without going the often treaded route of being gritty for the sake of it or bogging down the game with over realistic war game tropes. It was Doom and if that’s what you like, then Doom is all you needed.

To follow that up must have presented a daunting task. Id Software had already returned triumphantly and provided an experience that answered the hushed prayers of players of decades past. The ones that bemoaned Doom 3’s claustrophobic, darkened corridors, the ones that used their copy of Quake 4 as a coaster in favour of the free Quake 2 disc that came included with the Xbox 360 version. With so many unbroken aspects, the only feasible way to continue is to simply provide more and more is what Doom Eternal certainly brings to the table.

When we say More, we mean more. Doom Eternal takes everything that was great about Doom 2016, improving and expanding on all the elements, making them bigger than before. As the first example of this, you have the story. In the previous instalment, the story took a bit of a backseat and became a joke, with the now famous way that Doomguy reacted to expository dialogue by smashing whatever was speaking at the time. This time, there is a genuine feel of a narrative that long-term fans should enjoy. Thanks to the exploits of the UAC, the company behind the brilliant idea of harvesting energy from Hell for power, Demons have descended on Earth and is either killing indiscriminately or enslaving humans to build nests around the globe. Once again, you play as Doom Slayer, the marine that is just far too angry and violent to let this happen as he utilises an orbital ship that teleports him around the world to do what he does best. 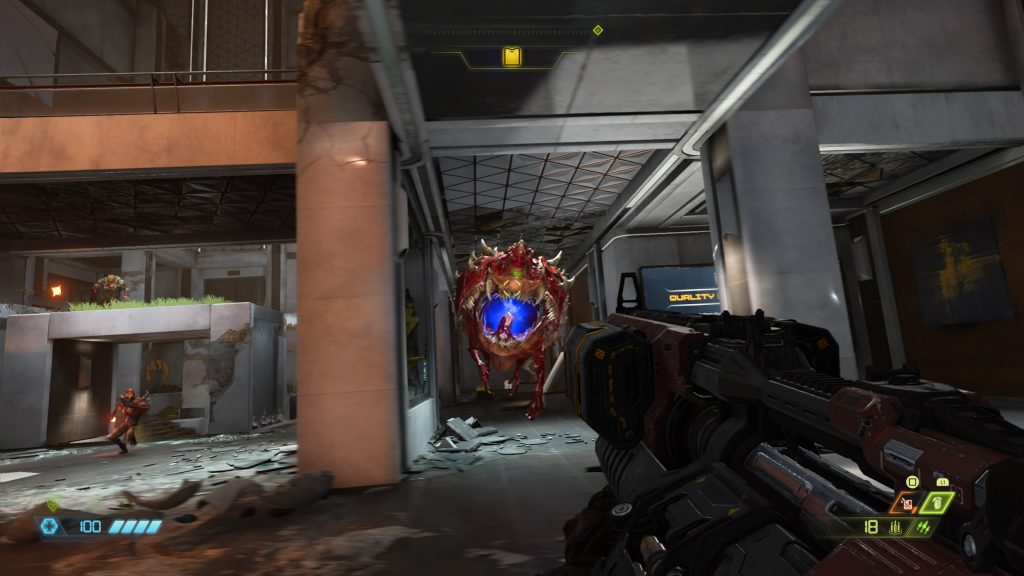 The Demons of hell and the removal of their vital appendages have never looked  or felt as good.

What is a bit of a surprise is just how much the world of Doom and main character’s story is fleshed out. Doom Slayer is portrayed as a character with slightly more to his motivation than simply going on warpaths for fun and being angry. Instead, he feels like an intrinsic part of the universe, both as a member of a sacred order of demon killers (more on that when you play the game, no spoilers here) and as the ultimate threat to the demonic hordes that you face. In fact, the absolute best aspect of this game is how it nails the sense of being this unstoppable force that even the armies of hell are so scared to see you sprint into view. It makes you feel like the true final boss as you land into frame, demons going about their business and dropping everything just to defend themselves as you rip and tear through them.

If any game embodies the words Rip and Tear, it’s Doom Eternal. The Doom Slayer has never been faster or more violent. The arsenal of weaponry returns from 2016, but with some much-needed tweaks to make each weapon more viable and essential to taking down demons with style. The pistol is gone, your starting weapon is the trusty single barrel, a weapon that retains all the punch and brutality of the original, with some key differences. For one, it does not immediately get superseded when the super variant is handed to you, instead, it becomes an ultimately viable solution in certain battles thanks to the more considered upgrade system. With this, all weapons can be upgraded with the use of weapon tokens that are found when completing challenges or throughout the world as pickups.

Upgrading your weapons in Doom 2016 felt more of a means to an end, a trapping of modernising the FPS, but now the upgrades feel great. Each weapon gets a choice of two modifiers and in the case of the shotgun, you can pick between an explosive shot or a rapid-fire stream of shells that decimate lesser foes and tear large chunks off your prey. The same goes for upgrades to weapons like the Ballista, a Quake inspired railgun that can be upgraded to shoot a blade of energy that cuts demons into half if they dare to cross it. 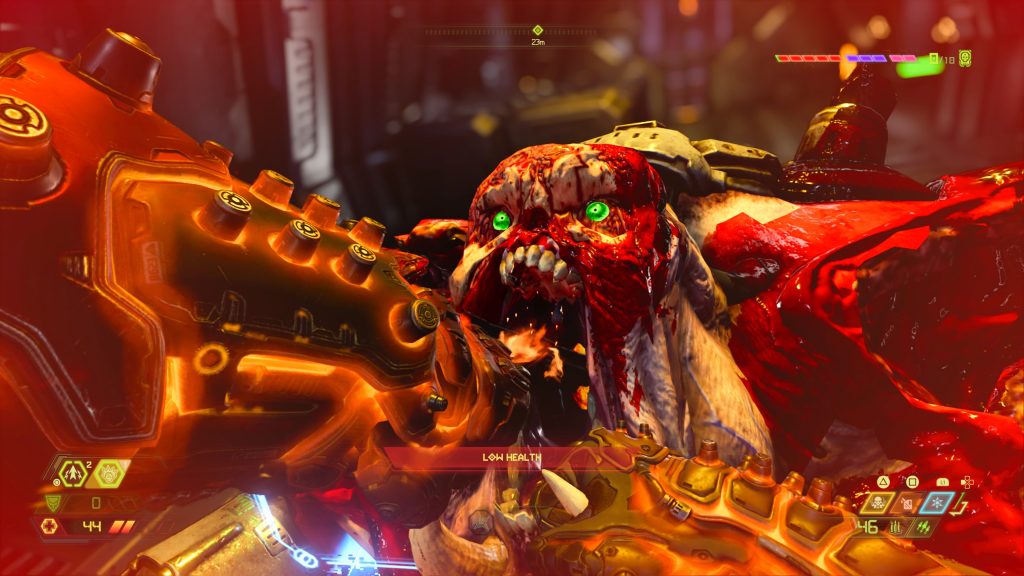 Each weapon is balanced, with heavy and special weapons getting less shots on a clip, or only being usable with special pickups, like the series stalwart BFG or the new Crucible sword. It may seem like a bit of a fun-killer when all you want to do is mash the citizens of Hell into mulch, but what it does do is make you rely on your seemingly lesser weapons more, creating more opportunities for on the fly thinking as you are chased around arena’s and corridors.

It makes Doom Eternal a game about priorities. Prioritising targets based on the weapons you have available to you becomes essential, for example if you have that rocket launcher then you will want to take on the horrible new Whiplash enemy as soon as possible, as chasing this around opens you up to attack from the Hellified Grunts or Imps. Don’t have that ammo? Switch to a weaker weapon, target the lesser demons and use them as your fountains of health, ammo or armour depending on whether you glory kill, chainsaw or flame thrower them to pieces. This added element of resource management makes the previous ‘Dance of Doom’ look like child’s play, learning to keep lesser demons alive to replenish your health and ammo becomes a vital path to success, but also an incredibly fun one. It also means that every button on your controller is going to get a work out with this game, while the glory kills in 2016 were a grotesque spectacle, Eternal’s make them seem tame and I have yet to experience a time where they got old, with some being a dramatic pay off to surviving a near death experience at the hand of a hungry Cacodemon that got that little bit too close.

Another large upgrade to the gameplay is in the movement of the Slayer, he has never felt nimbler, with a push on the analogues resulting in a full pelt sprint that Sonic would be proud of. Doom Slayer also benefits from some new moves this time, a push of the circle button results in a short and swift dash, something that can be used to course correct at a second’s notice or to quickly evade melee and ranged fire. But also, the dash opens a world of exploration. The maps in Doom Eternal are huge compared to the arenas that came before, with some levels taking place across chasms that can only be traverse by air, with the player having to time dashes to maximise airtime to get from point A to B. This added verticality opens so much more when you consider using all of this in a fight. Arena’s and open environments are littered with ledges, monkey bars and other accessories that the Slayer can use to gain height or get out of dodge when the Marauders appear. It doesn’t take a lot of getting used to and when you do, the action never skips a beat. 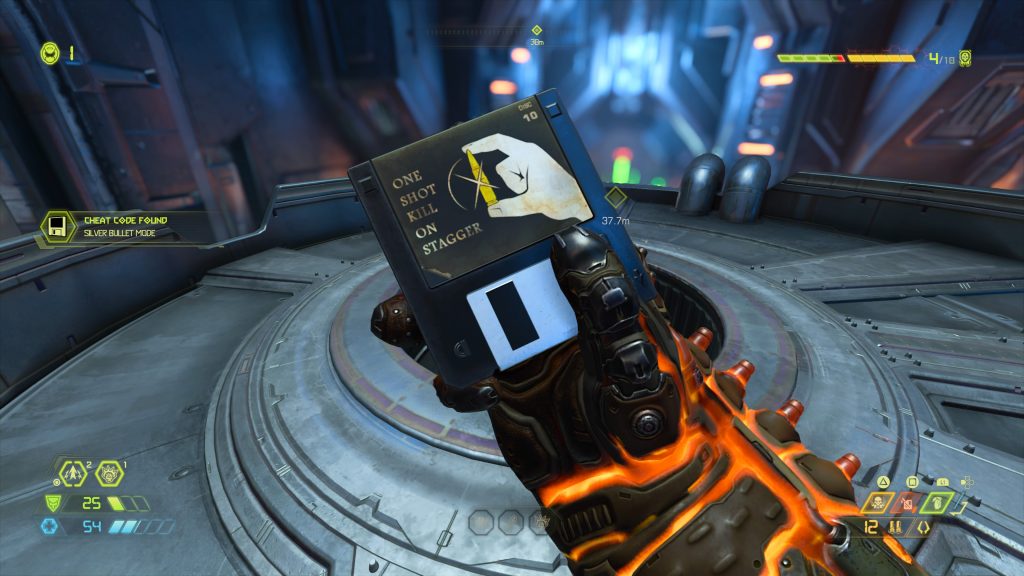 That’s the best way to describe Doom Eternal, it never skips a beat. The movement never slows, strategies for demon slaying never stop coming and the campaign keeps fresh even with 18 hours’ worth of story. A true feat for a game like Doom. It’s already an essential game before the 18 hours mark with enough content for someone like me who just wants to be challenged over and over with more demons and more playgrounds of slaughter. But there is even more content hidden within that we haven’t truly dived into yet. There are Slayer Gates, hidden challenges throughout each level that once completed will unlock something immense that I can’t mention. There are secret challenges that that give you extra skill points to spend on boosting both the Slayer and his weapons. There is the Fortress of Doom, The Slayer’s base that acts as both a hub for getting to new levels and also to view secrets that you have collected along the way, including floppy disks that unlock cheat modes that give Doom Slayer a boost when revisiting old levels to find more secrets.

Then there is the stuff that just isn’t implemented yet at the time of this review. Battlemode is an asymmetrical multiplayer mode that sees one Doom Slayer vs a horde of player-controlled demons. Then there is Invasion which sounds fun as all hell, allowing players to invade other players games to try and make a mess of other slayers as they progress through the campaign. While it is regrettable that I was unable to play these modes. Both and the reasons above has given Doom Eternal a reason to exist past speed runners and lore video creators who of course, both will have a field day with Eternal. 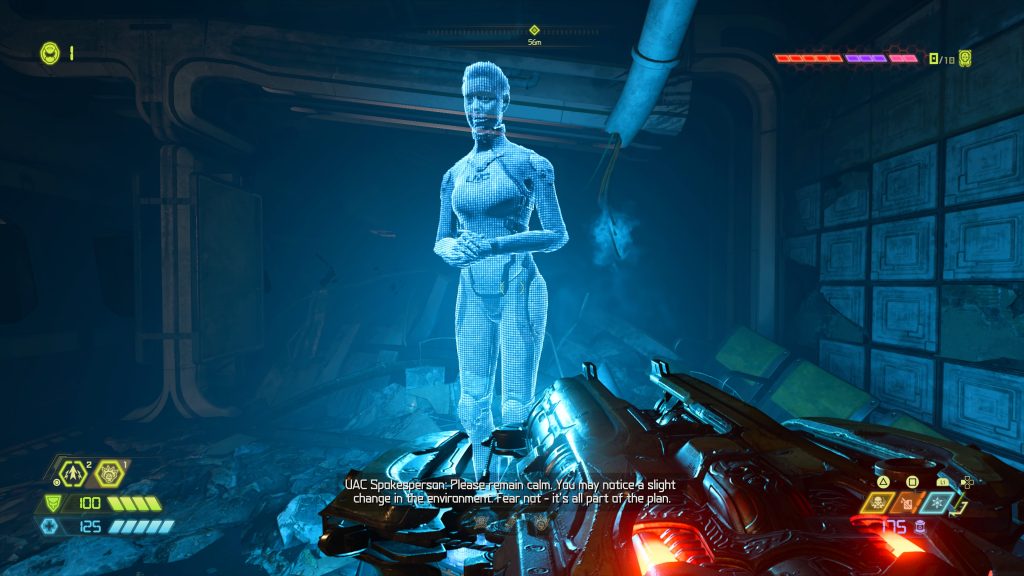 Despite being a more serious entry, Doom Eternal keeps the series sense of humour.

Lastly, but certainly not least. The soundtrack. Mick Gordon does it again with Doom Eternal, bring back that industrial heavy metal vibe with more style and spectacle than before. It makes the game seem like a grotesque music video as you stomp on necks listening to thrash that sounds like it came straight out of a Dimmu Borgir album. It’s fantastic and caps off everything I could have possibly wanted from a Doom game. The whole package is fantastic and it’s not just a worthy addition to the Doom legacy, it’s the pinnacle.

Doom Eternal
10 Overall
Pros
+ Does everything that Doom 2016 did well and improves on almost every aspect
+ Utterly gorgeous on PS4 Pro with super-smooth framerates to match
+ Much more varied locales this time from the greenery of Earth to the industrial corridors that Doom fans will know all too well
+ Keeps up the blistering pace and challenge throughout
+ very replayable
Cons
- Still not one to pick if you insist on a deep overarching narrative.
- Some odd Culling when the screen gets busy
- If you don’t like Doom, then I don’t know what to tell you.
- It's almost impossible to get good screenshots in this game with getting heavy motion blur
Summary
Id Software takes all of the elements that made the previous 2016 entry a great FPS and turned everything up to eleven. The action has never been faster, more violent or as fun to play as this. Doom Eternal is not just a great FPS or a standout sequel, It's a pinnacle of what the genre has to offer.