Dead or School is that rare beast, at least on Western shores, that is a Japanese indie game. Coming from Studio Nanafushi following a 2016 indiegogo crowdfunder, we have here is a 2.5d hack and slash brawler with RPG elements. Notably that fell well short of its target and it’s to the three-man team’s credit that they have got Dead or School to the market at all. At the outset you might be forgiven for thinking you’d bought a visual novel, such is the extent of exposition.

The opening gambit is that the human race has been contaminated with an unknown virus, those that remained uninfected retreated underground. It feels vaguely topical given current events, put it that way. There’s no toilet paper shortage though. Dead or School makes great emphasis of the fact that humanity has been banished to a subterranean existence for seventy-eight years. Quite why it makes such a big deal of the years elapsed is initially a mystery, but anyway. 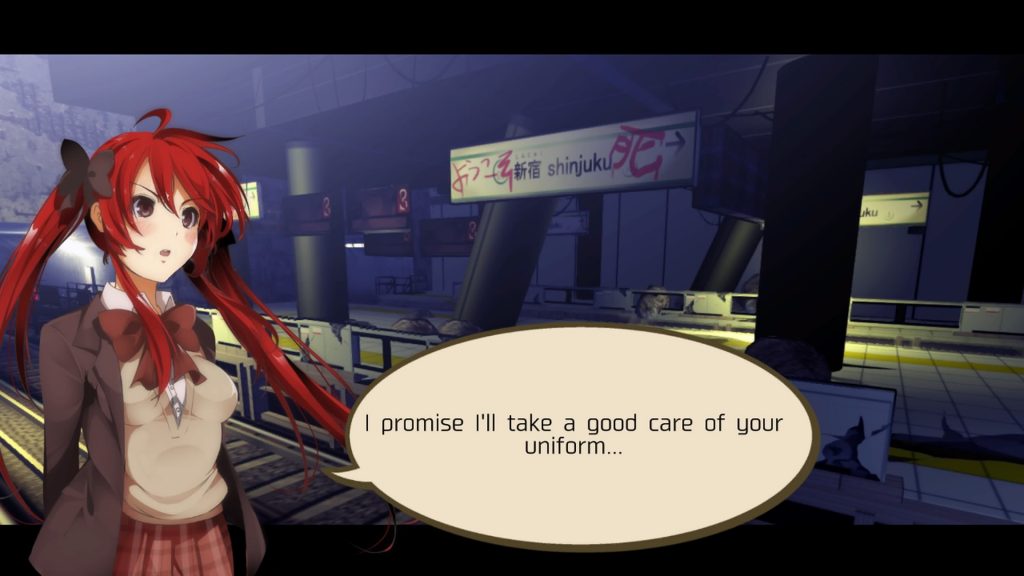 The visual novel feel is enhanced further by the nubile young ladies with shirts that are inexplicably too tight. We guess fabric is in short supply. Anyway, our hero is presented with her grandmother’s old school uniform to help in her quest to the surface. If this looks like it’s going into sketchy territory, it’s probably because it is. You’re soon clad in said school uniform for no other reason than Japan. It gets better. If you take sufficient damage your uniform is torn to reveal undergarments fighting to contain swelling breasts. The game tries to explain it away by putting the uniform in context by subtitling a cutscene with “I’ll wear a uniform… and save children from danger.” C’mon guys. This coupled with lascivious comments from the male NPCs when a woman’s dress is found for one character, leave you in no doubt we’re firmly in sketchy waifu territory here.

The denizens of metropolitan Tokyo find themselves living in areas excavated deep beneath the Metro system. The main protagonist Hisako emerges from tunnels in the vicinity of Shibuya, battling her way through sub-areas to eventually face a boss. Even on the story-focused easy level (never have we been so grateful for such a concession), the challenge is occasionally steep. After a short excursion above ground, events unfold that show how woefully prepared you are to venture forth. The next level is based in Harajuku aka Meiji-jingumae, so the metro map is pretty accurate in terms of real-life station placement. Irrelevant in the context of the game, but a nice little detail anyway. 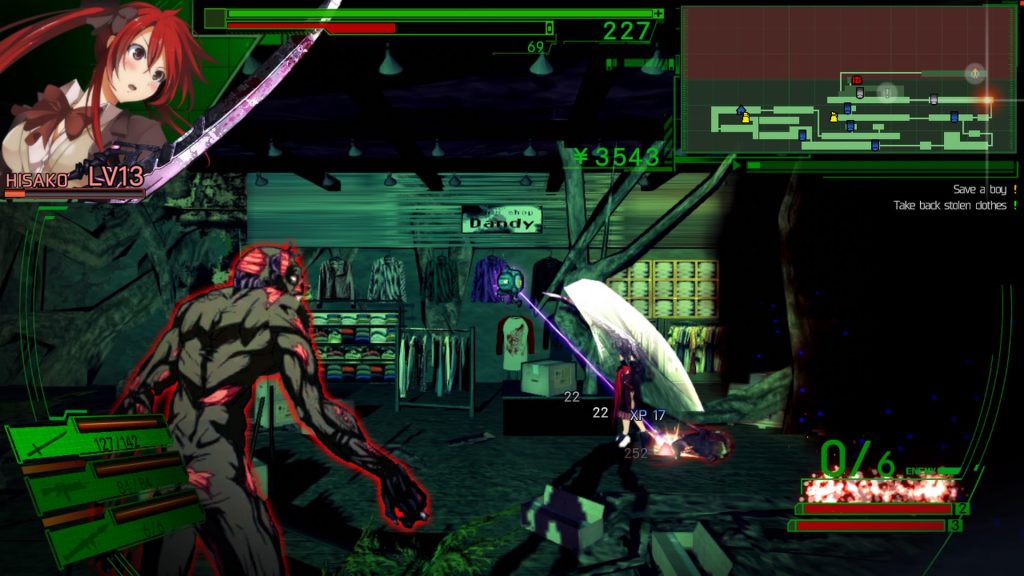 Your main weapon is your sword or whatever melee weapon you have equipped. You have two secondary weapons, initially a machine gun and rocket launcher. They have their own advantages in terms of stopping power and heft, but naturally limited ammunition and in the case of the heavy weapon a lengthy reload time and slow rate of fire. We’ve grown very attached to our shock-infused shotgun, put it that way. A standard attack is R1 with a useful alternate fire mode mapped to L1. In the case of the sword, this unleashes a handy combo that lets you unload on a group of enemies with abandon. It’s all very satisfying. Similarly, the secondary and heavy have useful alternates, a heavy fire mode that spaffs your ammunition and a very useful slow mode respectively.

The 2.5d forced perspective makes for a good angle from which to view the action. Only occasionally will you find yourself failing to see what’s going on due to foreground level furniture. It allows Nanafushi to throw a good number of enemies into the throng, their quantity only being an issue to your health bar as opposed to bringing our standard PS4 to its knees. When we beat a stage end boss and triggered a loot explosion, they were the only instances we had with any sort of slowdown. 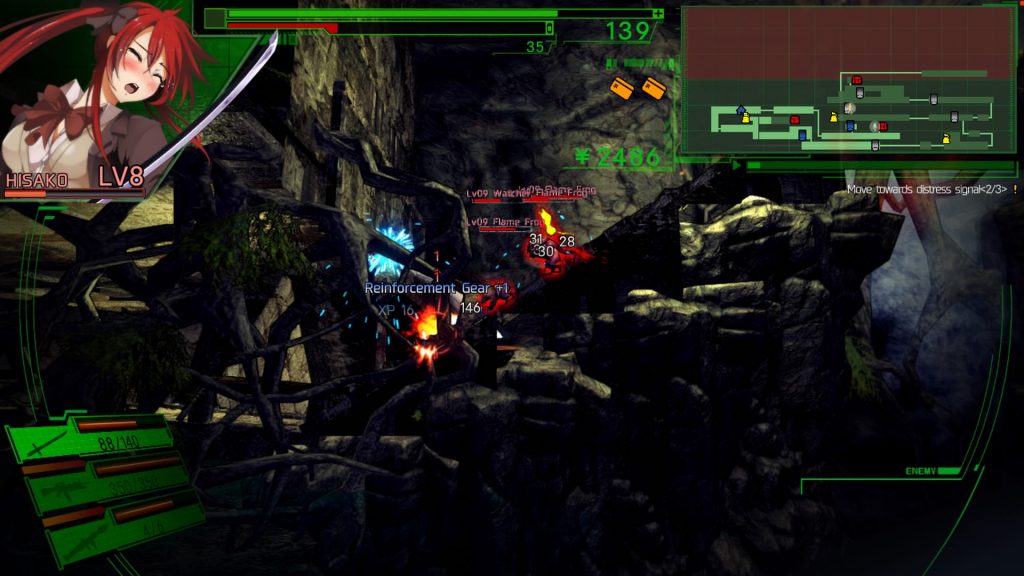 Every enemy kill elicits a bump to your EXP gauge. Subsequently even an encounter where you end up overwhelmed and succumb to the onslaught ensures you don’t come away entirely empty handed, your progress being saved and any experience earned is retained, Your only penalty being a small cash hit. During our playthrough we didn’t ever feel hard done by nor short on cash as a result.

If there’s any negatives to be had, the game engine isn’t the most sophisticated, some moments appearing resolutely last gen. We’re reminded of PS3/360 era lemon Mindjack a little bit in terms of the sheer shonkiness here. In fact, one tunnel animation harks back further still to Konami’s N64 game Hybrid Heaven. This kinda adds to the charm despite that.

Sometimes you’ll find yourself overwhelmed by the sheer number of enemies throwing projectiles and ordnance your way, but in our case, we simply called it a night and came back to the area fresh the next time we played. As well as this small issue, you’ll sometimes face groups of enemies that are just that bit overlevelled for your current state. We guess that’s just a little bit of gating on the devs part. to stop you exploring quite so readily. One group in the third level proved troublesome on our first attempt, but once we’d played through the rest of the level, increasing our strength made all the difference. That’s not to say we easily swatted them aside, but the challenge was much more manageable rather than overwhelming. 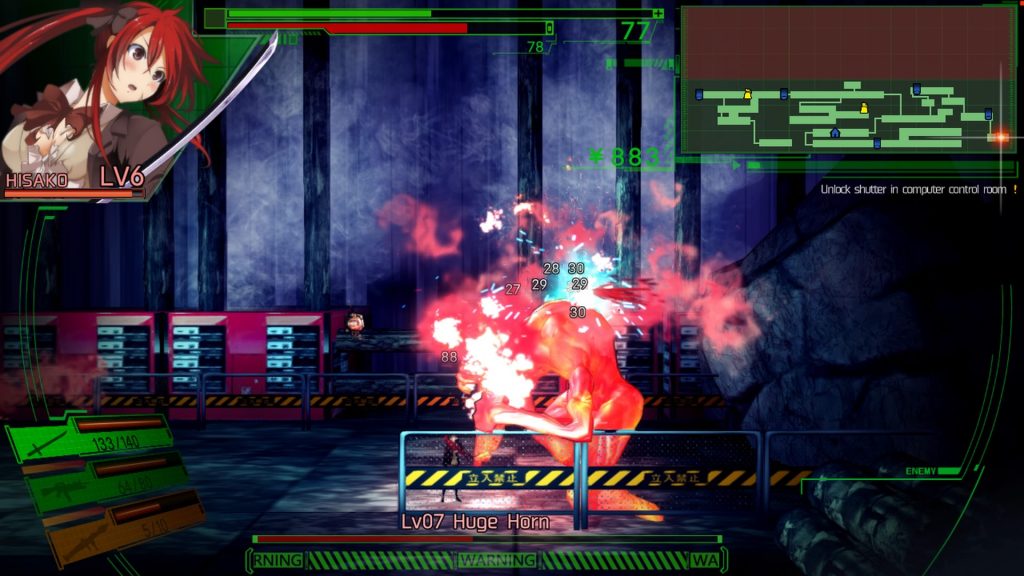 One thing Dead or School does well is that it marks all your objectives on the on-screen minimap. That means there’s little chance of missing a sub-objective, and even if you end up taking on the boss of a level and triggering the end, you can revisit it to backfill objectives. In addition to this genuinely useful map, the levels are broken up into subsections. Each of these is assigned a save point that you’re able to fast travel between. It saves lengthy retreading of levels if you go back to them or happen to die.

A small problem that we hoped would be ironed out come the western release, hasn’t been as yet. All the trophy information from the original Japanese release is pulled from playstation.com. Currently that means all the trophy descriptions are in Japanese, but the unlock text is English. However when you look at the trophy information for unlocked or otherwise on your console, it’s all still in Japanese. Thankfully the excellent Truetrophies has all this info, but for many players they will remain in the dark otherwise. 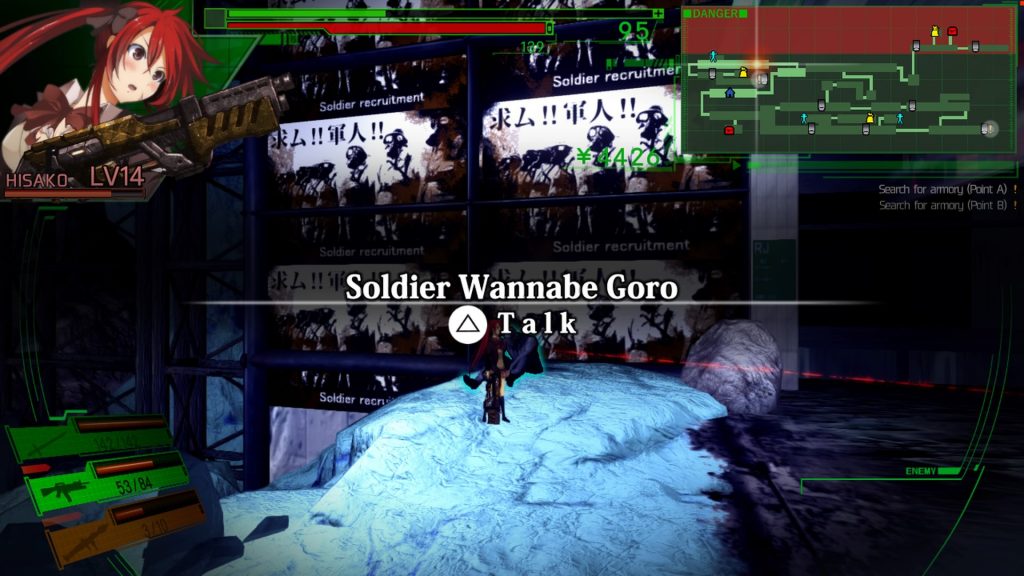 Dead or School is a good game, just a bit embarrassing when it comes to the visual novel parts. We’re glad that there’s not a port on Vita as on a busy train it’d look pretty sketchy if someone caught a glimpse of that. Combat is good, just as the loot and equipment is well done. Thankfully you can’t be over-encumbered or we’d find ourselves in Skyrim territory. We’re currently forgoing our preferred secondary weapon for one that increases the chance of encountering a rare enemy, so we’ll be glad upon popping the trophy for that as we can revert to electro-shotgun joy once again.

All of this combined, makes for a good game you’re likely to enjoy. Hunker down, self-isolate and socially distance yourself from civilisation, just perhaps not for seventy-eight years.

Dead or School
7 Overall
Pros
+ Engaging gameplay and combat
+ Stiff challenge even on easy, but not prohibitively so
+ Runs well on base PS4
+ Minimap is genuinely useful

Cons
- Sketchy female depictions
- Game engine is a bit clunky and grey on occasion
- Slowdown a factor during climax of boss fights
- Death is but a roadbump as opposed to a genuine problem
Summary
Dead or School is a well-done 2.5d hack and slash game set beneath a ruined Tokyo. Coincidentally topical in terms of a virus ravaging the population. Well worth playing at any rate.