Dog Duty is an indie real time tactics game. That means it’s a shorter experience with purposefully low tech visuals and a slightly shallower experience. That’s not a knock but read on to see the details.

Your helicopter is shot down at the beginning by the evil Octopus Commander and you take control from a prison. A cake is delivered with a key and a shotgun (stay with me) and you’re given control. There are no instructions on what to do but you don’t have direct control, you control a cursor and click where you want your character to go like Cannon Fodder. 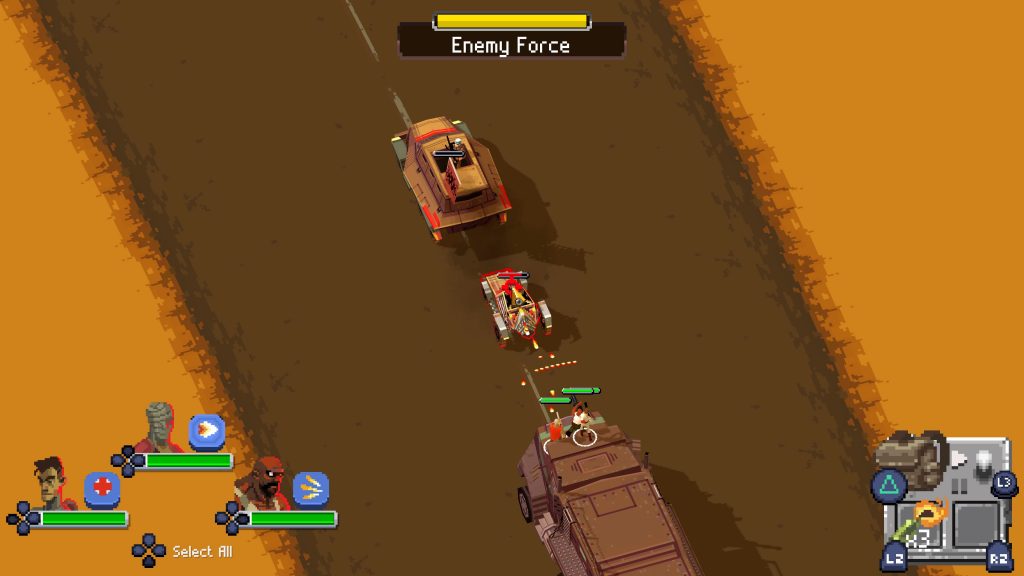 Characters will automatically shoot as they get in range but you can also click on an enemy to target them. After a couple of kills you’ll encounter a prison to release a second character, and after a short while you’ll discover a third and this’ll be your squad. Again you’re not given any instruction but each character has a position on the left, up and right dpad buttons, with down selecting everyone which will be your primary setting.

Each character comes with a different weapon though they aren’t set in stone. The shotgun is most effective at close range as the bullets spread the further they travel making them less damaging, whilst the mini gun takes some winding up and doesn’t have great range but is a rapid stream of damage once it starts going for example. Each character has a special ability on a cool down which can be used by selecting them and pressing

and some are far more useful than others, with one having a healing ability and another good one boosting that character’s fire rate. The dash skill seems pretty ineffective in comparison. 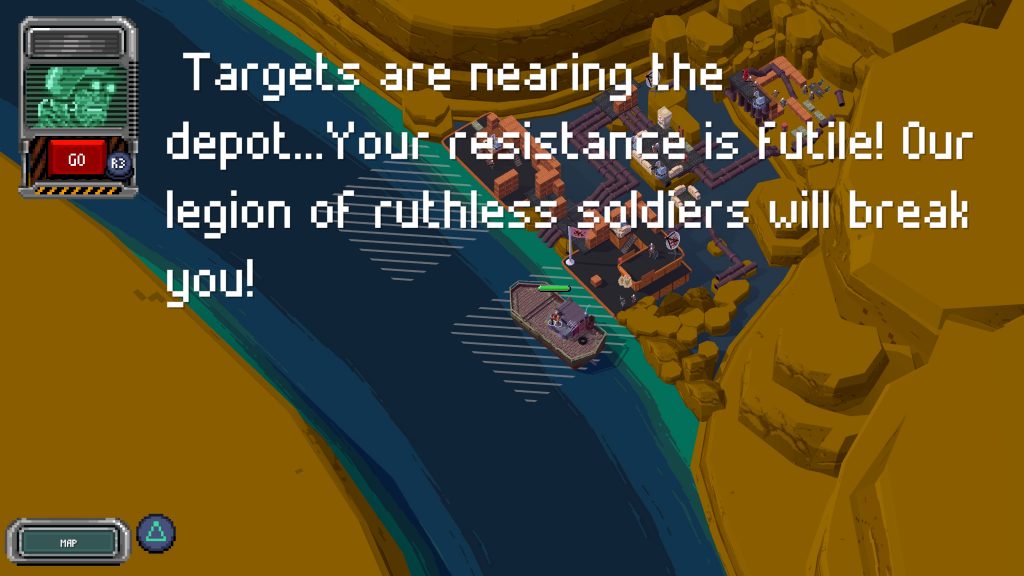 Once you fully break out of the prison you take control of a vehicle and drive around a somewhat open world. It’s not detailed or packed with content but you can drive around and find bases to attack. There are three islands connected to this main island which you have to tackle. You only have to take down the main base which houses a super weapon but you can attack other bases before hand. These will have an impact on the enemy forces, so if you attack their armour stores then the enemies will be easier to kill, whilst a regular base will impact their ability to send reinforcements which usually come thick and fast as soon as you enter a base. Some also house POWs which become squad members (but you can only ever use three at once).

Bases have a set design and enemies patrol around in groups. Ideally you’ll want to edge along picking off enemies from as far as you can so you don’t take too much damage, but if you’re close enough to them to shoot then they’ll be close enough to shoot back. As mentioned before reinforcements arrive as soon as you set foot in a base and they come from behind you so this slowly, slowly approach does not work as by the time you’ve killed those reinforcements another lot will be coming in so you need to constantly make progress. 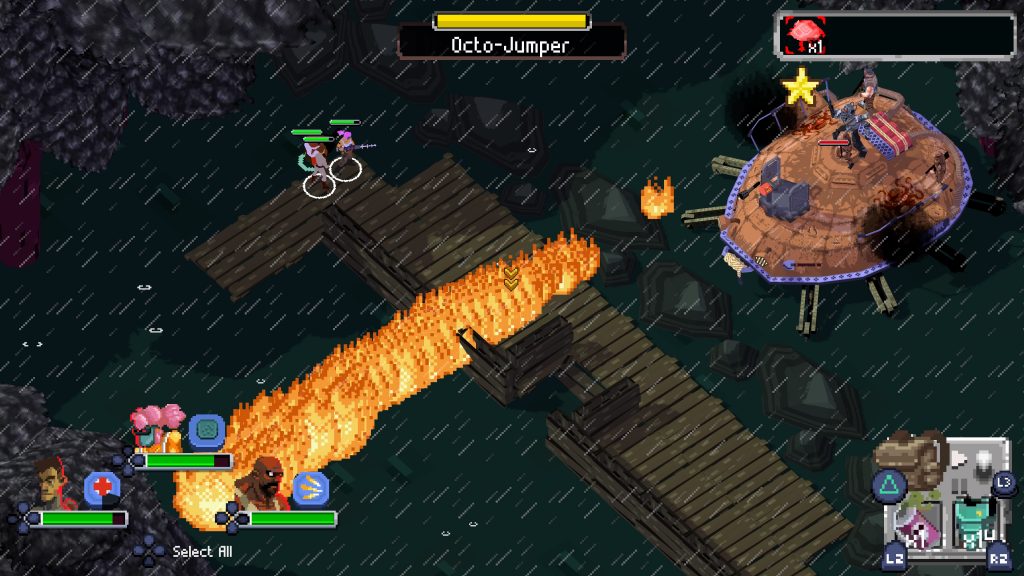 This is where the tactics part of the real time tactics comes into question for me. There’s not a whole lot you can do to vary up your play style when attacking a base. I did learn that sniper rifles are handy for out ranging your opponent but as far as using positioning or flanking manoeuvrers there’s basically none of that. The one time when moving and positioning does matter is in the boss battles, but they also tend to be quite easy and I never died on them once. Which I appreciate actually as if you die in a base you have to travel back there on the world map and go through all the enemies again, there are no checkpoints.

You can can do the same thing in a level and get a different result, thanks to the AI of the enemy and your teammates. As mentioned your characters will automatically shoot when in range, but they’ll also happily shoot at the floor or a wall if they’re not quite positioned right, rather than reposition. It can be hard to notice with all that’s going on and can give the enemy some free hits. Similarly enemies can be taken down quickly or can wipe you out with scary efficiency. It can be frustrating to do something successfully, fall later on only to attempt it again and not get so far despite taking the same approach. It does start to wear on you. 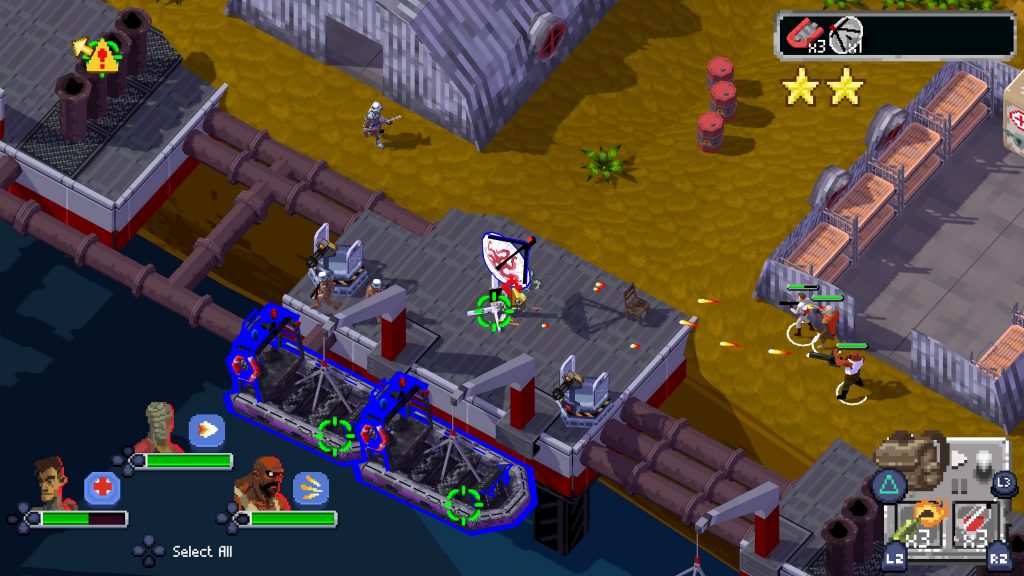 There are items you can use, either found in bases or bought from shops, but I didn’t find it necessary to use them though they did help at times. The only time I can’t see it being possible to progress without them is right at the end where the game throws a never ending supply of enemies at you which your guns simply can’t chew through whilst also completing the objective. Again, I wouldn’t call that tactics though, it’s literally just a stream of enemies.

You can get quite a few enemies running around thanks to the visual style. It’s very low poly 3D visuals with simple textures which doesn’t look ugly but doesn’t come close to wowing you at any point either. There are a few voice samples as your characters respond to your orders and the music is pretty decent.

There are issues with the UI though. The controls were obviously designed for a PC and they haven’t converted to the controller that well. You can click in the left stick to slow time and get that little bit of accuracy whilst moving the cursor but in menus things are clumsy and the controls on the vehicles are unpredictable. When you’re going in the right direction they’re fine but turning can be a pain and you can end up driving backwards without trying. It can also be prone to crashing during a load and the text is all poorly sized, as in you’ll only get one or two words of a whole sentence which is very odd. As I mentioned earlier, the lack of any tutorial or explanation at the beginning is an odd choice. 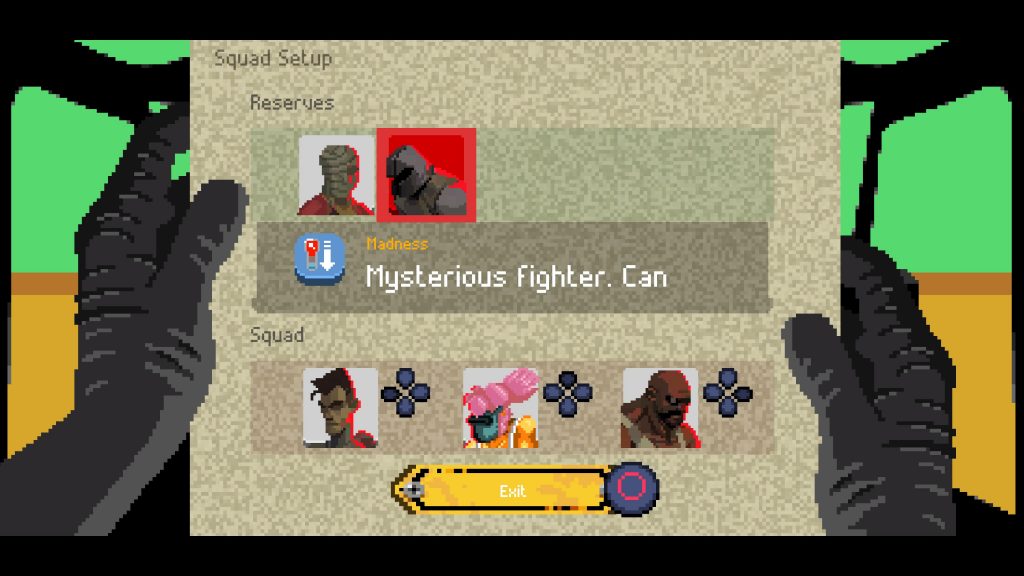 Which leads me to say that Dog Duty is an okay game, though I spent most of my time playing it frustrated at the lack of options. It only took me about five hours first time through, but I went back into it and the second playthrough was much quicker (there are actually two endings with different boss battles). The UI issues along with the one note gameplay makes this a tough one to recommend on PS4. I didn’t hate it, but I didn’t get a whole lot out of it either. Although far cheaper than a full release I’d also say it’s quite pricey for what you are getting as well, so maybe if you are interested in a very light tactical title then maybe wait for a sale.

Dog Duty
5 Overall
Pros
+ Can tackle bases in any order
+ Boss battles actually require positioning
Cons
- Controls haven't translated well to controller
- UI is a mess
- Gameplay is lacking in the tactics department
Summary
Dog Duty is a simple real time tactics game. There are controller and UI issues on PS4 and the 'tactics' element is lacking but if you're looking for a lighter experience this'll keep you busy for a couple of evenings.