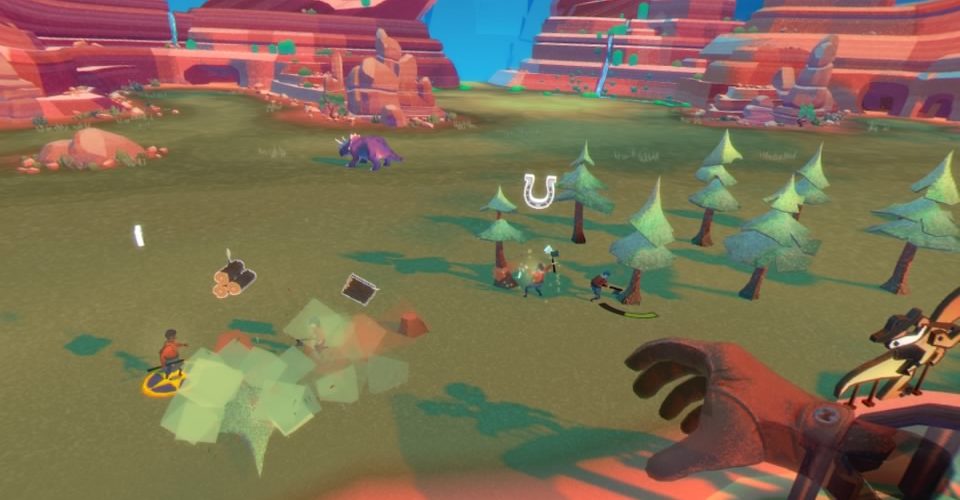 Uber Entertainment have already brought Wayward Sky to PSVR and now they’re continuing to support the format with the release of Dino Frontier. Have you ever dreamed of being the mayor of a town manned by cowboys and dinosaurs? Then do I have good news for you my friend. 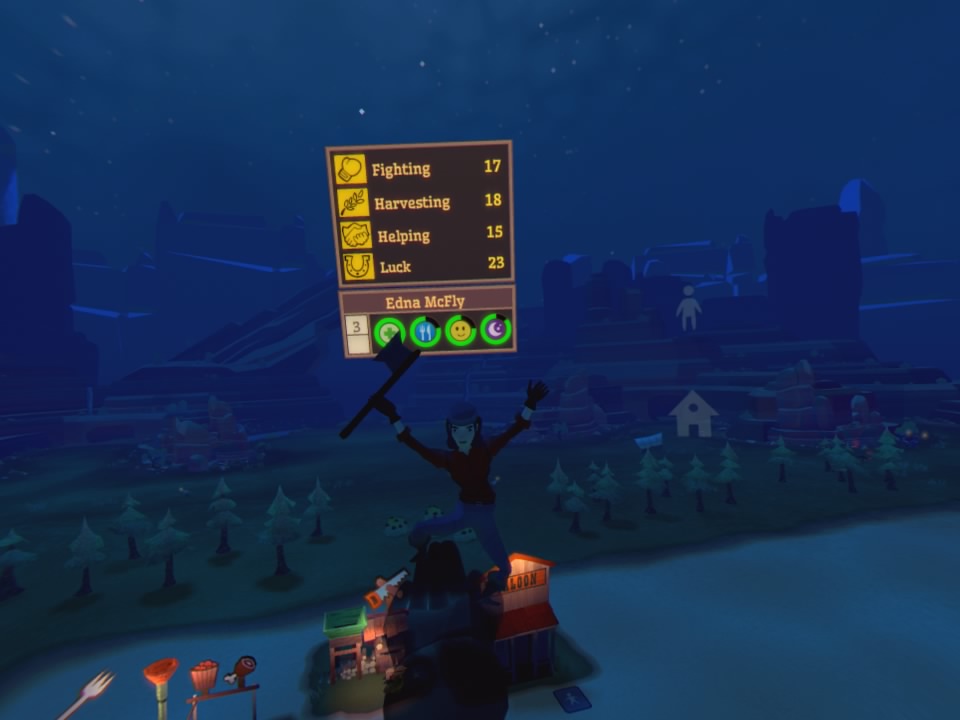 You are the giant mayor, represented by just two hands which are your Move controllers. You can use these two hands to move around, interact with the world and construct new buildings. There’s a pretty basic menu system for building which has you grabbing the menu from the top right of the screen and then pulling the item you want off the menu and placing them where you want them. From there you can grab a mallet, hit it a few times and voila, new building.

Settlers will come as your ability as a mayor increases and the town expands. These little guys have their own stats but can be put to any job. Getting materials will be the most important task throughout the game, with wood needed for building and food required to feed your people. More buildings open up you as you progress, to keep your people happy or give them better weapons and all buildings can be upgraded a couple of times to improve their effectiveness. 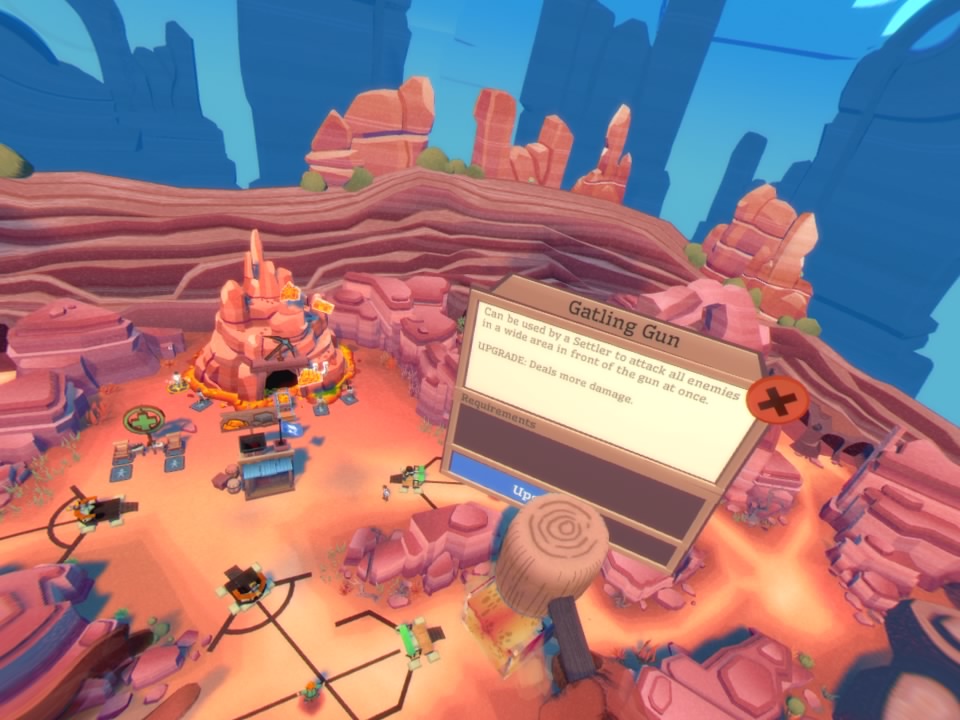 Initially you’ll need to man manage everything, picking up the wood chopped by your people and bringing it back to town and using a giant watering can to make the trees regrow, but you gain the ability to capture and train dinosaurs that act as an automated option. They never become as efficient as you but do allow you to forget about the basic upkeep for a bit.

You quickly gain access to a separate farm that offers up some free wood, food, ore and gold on a time limit which is good in the early game but becomes less important as the game goes on and there’s also a mine which you can take your settlers to, which basically boils down to a tower defence game where you juggle mining for ore and gold whilst fighting off bandits and dinosaurs with upgradable defences. This is your primary method for getting these materials so you’ll be revisiting this area a decent amount but once you’ve upgraded the defences a bit it becomes pretty easy and never gets harder.

You level up as the mayor and your people level up individually too, getting better at fighting, harvesting and the like. Beyond worrying about the odd bandit attack on your town the game is pretty laid back. Gather resources to upgrade your town, go to the mine when you need ore or gold, build/upgrade some more and so on. New settlers will arrive as you level up but only to a total of eight and you can only have one of each building type or dinosaur so it’s not like you’ll be upping efficiency by creating multiple of certain buildings. 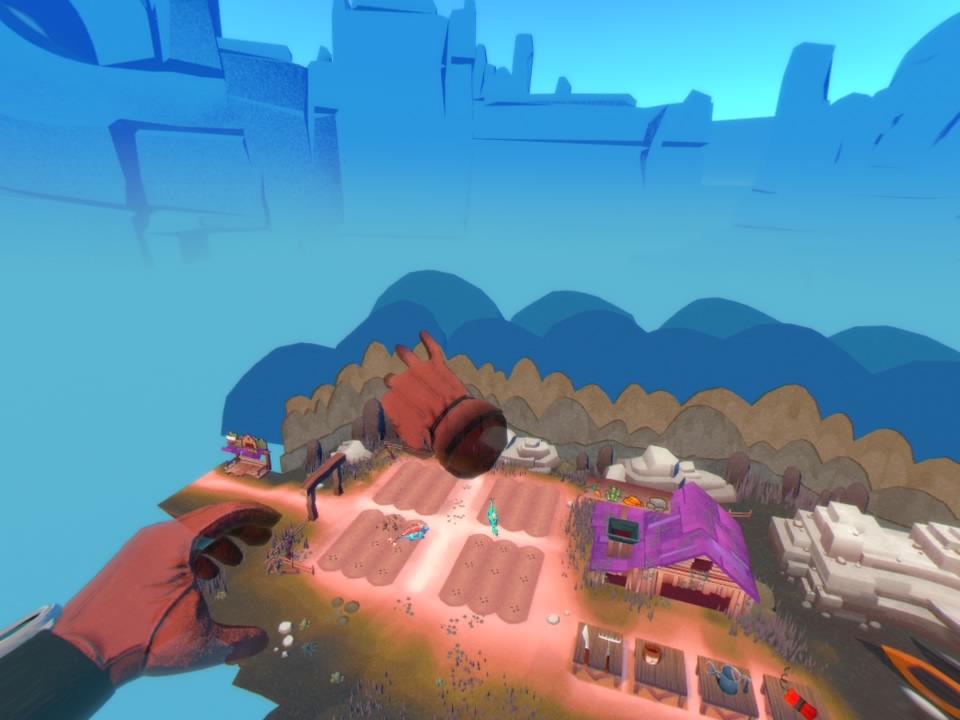 In fact the game tells you what to do like a tutorial, but it’s the whole game. As new buildings become available you’ll be told to make it, when a new dinosaur can be tamed the game will tell you to do so. You can go off script if you choose but the laid back pace, general lack of difficulty and hand holding nature of the objectives makes this feel like the first level of a campaign, but it’s the only level. It took me around five hours to complete the game (defeat the Bandit King) and gain all the trophies which isn’t terrible for a VR game but when you look at the price (£30) you’ll probably expect a little more.

I’d have liked a bit more too because the game is super fun. Moving around the map by pulling it around and zooming in and out by ‘pinching’ the world like a smart phone works very well, and although the graphics are more stylised than impressive you do get drawn into the world. There is a strong humour element too with multiple country and western style songs featured throughout and all your little settlers having high pitched voices. 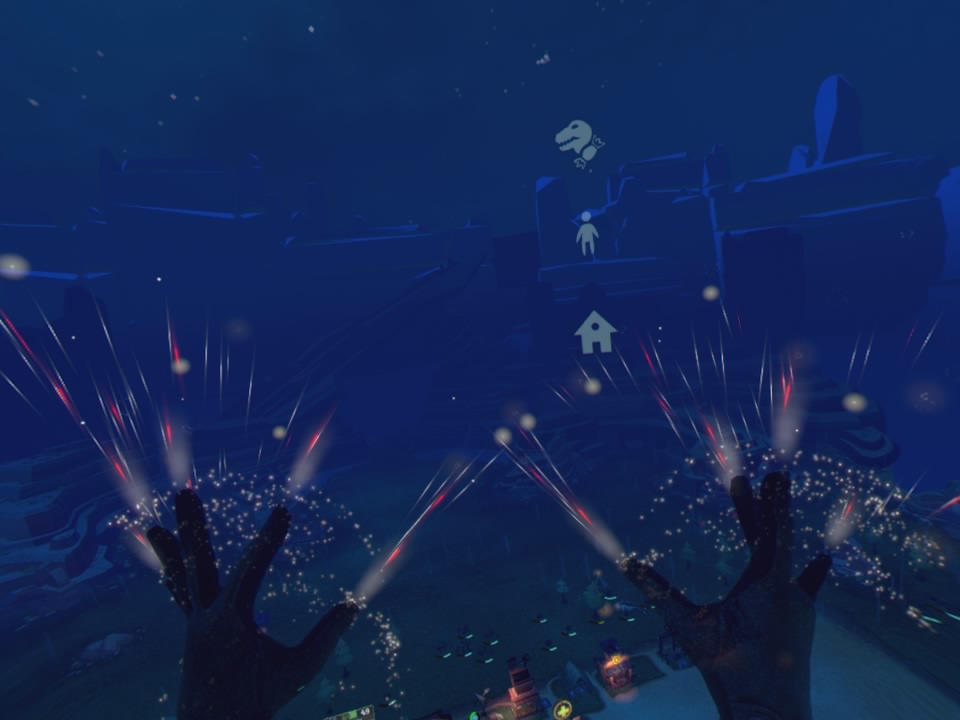 Dino Frontier is fun, the controls work very well and you’re always working towards something. Unfortunately the whole game feels like the first level of a larger game, one with more towns and a greater challenge. Definitely one to check out, but maybe when it’s gone down in price.

Dino Frontier
7 Overall
Pros
+ Controls really well
+ Building and upgrading your town is fun
+ Good sense of humour
Cons
- Lacks content
- Very easy
Summary
Dino Frontier offers another short but sweet experience for PSVR. It's a lot of fun to build your town but the lack of difficulty and content makes it feel like the first level of many when in fact it's the only level. One to look out for if the price drops.