It’s a genre we don’t tend to come across too often but shoot-em-ups are as established and as old as the industry itself. From humble arcade roots, they can branch off into intriguing areas with twists on old mechanics and new ideas. Chasing Carrots are looking to provide their own spin on the vehicle-based variant with Pressure Overdrive. Considered an update on prior game Pressure, this enhanced version hopes to rectify some of the predecessor’s complaints whilst trying to deliver the game to a larger audience. Can it find a target or fire blanks? 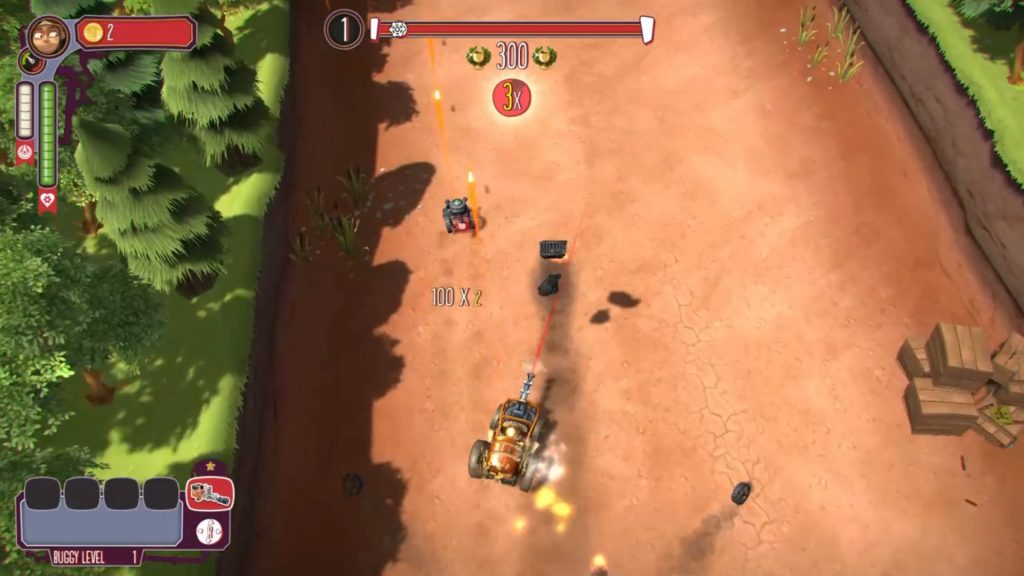 On the face of it, Pressure Overdrive is a an arcade, vehicle shooter in the same vein as Spy Hunter. Over a quick campaign with dozens of levels, you are tasked with destroying all comers as you race from start to finish. The game’s main mechanical hook is the pressure resource which influences crucial aspects such as shot speed and available boost. From the outset, you’re tasked with managing this effectively whilst frantically trying to secure safe passage through the game’s tight, twisting levels.

It can be quite jarring as my natural instinct in a game of this type is to never stop shooting. Early on, this becomes detrimental to your success as you run out of pressure and ultimately slow to a crawl. Destroying enemies does come with benefits as they reward you with pressure and gold. There’s an interesting push and pull to combat which works relatively nicely. 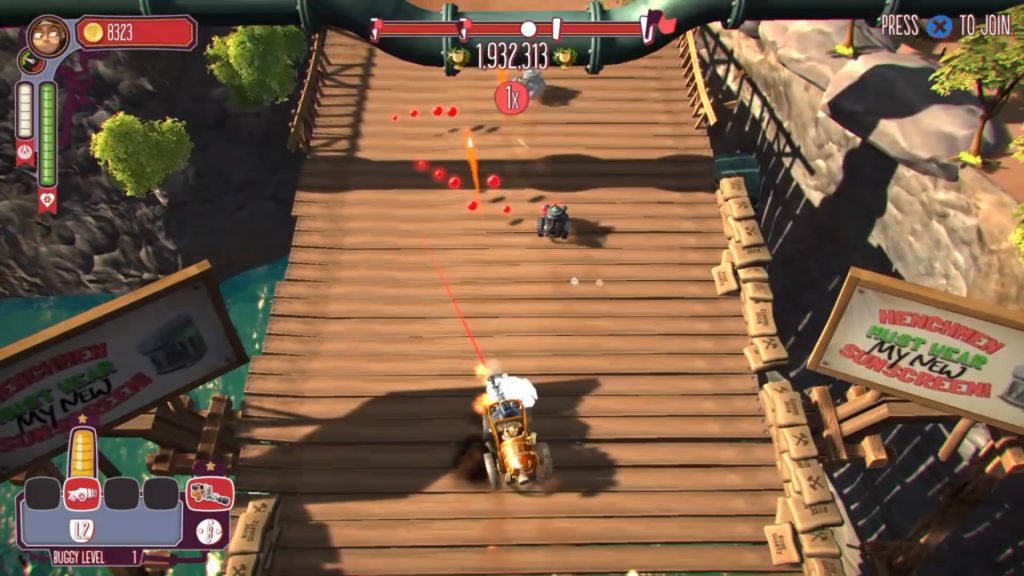 There’s a variety of combatants which keep things fresh. You have the typical, nimble grunts that die in a couple of shots whilst the larger brutes take more time and effort to fell but deliver greater rewards. There’s always the possibility of getting swamped so prioritising targets can come into play. The balance of power can switch in your favour with power-up trucks that appear in each level and, luckily, they all provide genuine use. I gravitate towards the rapid fire or spread shot bonuses but the more passive effects provide equally satisfying relief. Gold trucks also travel the same path for extra cash for upgrades.

The upgrades come in varying shapes and sizes. Some offer passive benefits like health regeneration on enemy kills whilst others focus on upgrading firepower and defence. You can switch upgrades in and out if you fancy a change of playing style, although the resale value on some kit can leave you short changed. I found my way through the game focusing on hull defence and upgrading the default pea shooter. It proves quite deadly when it’s maxed out.

With these upgrades, the game does delve into something of an occasional power fantasy. I struggled with the first boss but the rewards for beating it resulted in enough gold to set myself on the path to something of a cakewalk. That’s not the say the game doesn’t deliver challenge. Some levels go by at the first time as asking whilst a handful of others deliver choke-points that require a little more thought to traverse. At times, it’s fun and mindless with a couple of scenarios handing out some frustration. 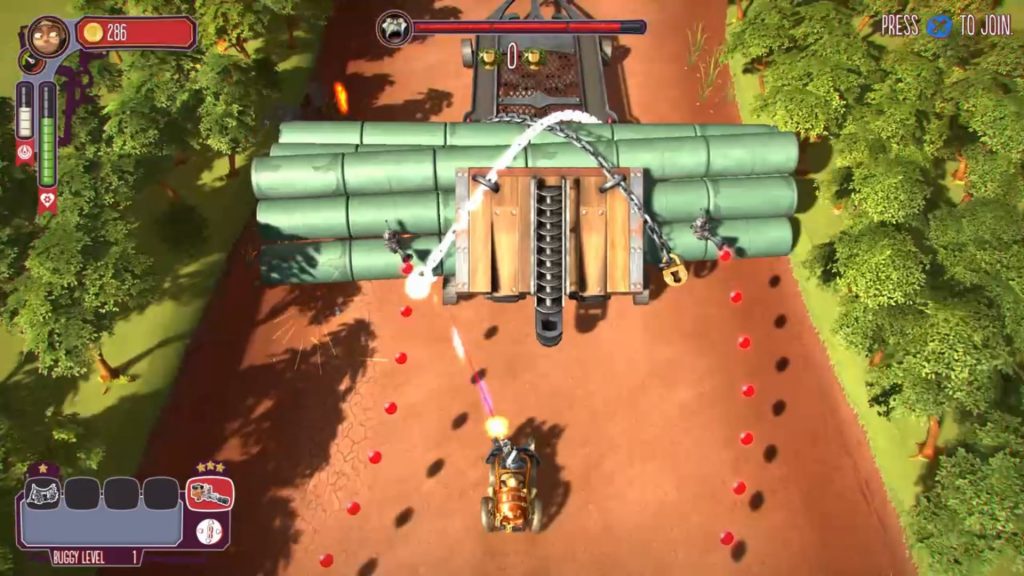 With 33 levels in all (including three lengthy boss fights), Pressure Overdrive is a brief adventure that should see you through two to three hours. Leaderboards offer some reason to replay and a hard difficulty for those that want it. The levels themselves are linear affairs and, whilst set across three areas, they don’t vary enough to truly feel special or unique. It doesn’t quite turn stale due to the short time investment but you will see similar environments and enemies time and time again.

There is an endless mode which acts as a wave-based survival effort. Slot machines dole out gear at the end of each wave with the option to re-roll governed by coins. It adds a little more shelf-life to it. Free play mode acts too similarly to the campaign to really be considered new or different. 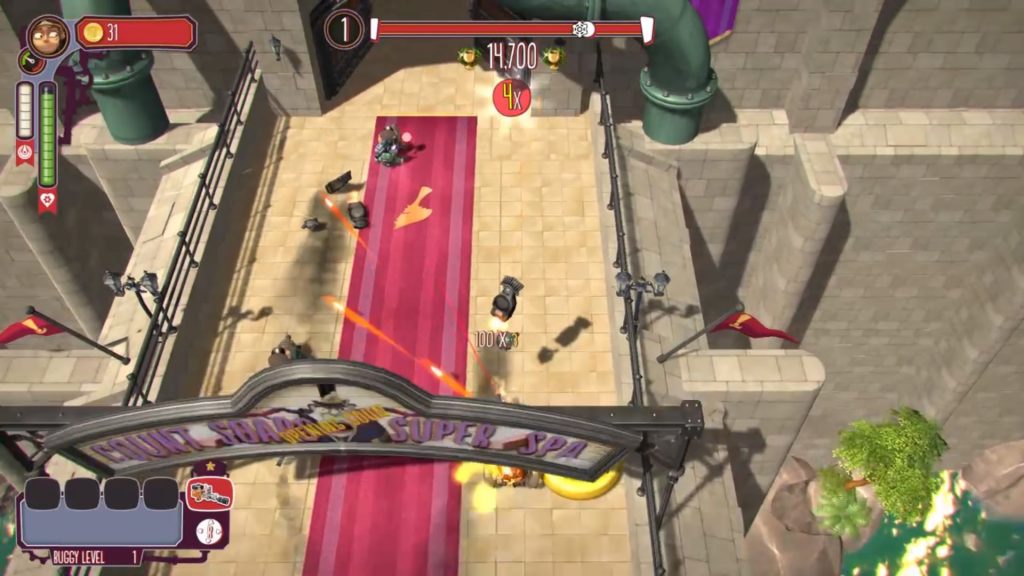 Pressure Overdrive also lacks in story. The tale is simple enough. Count Soap is a Spa owner who has decided to drain the world of water so he can pump it into his latest building. He also builds deadly, weaponised vehicles. There’s a few short scenes that spell these motives out but it’s all very light and mostly played for comedic effect. I’d have liked to have seen more of them just to flesh out the characters or introduce new areas better. As it is, the story is there with no real build.

Despite some aspects being underdeveloped, Pressure Overdrive provides a neat little shooter with some challenging boss fights and enjoyable, albeit linear levels. Upgrades give you a little license with how you play and, whilst it doesn’t hang around too long, I can consider it time well spent.

Pressure Overdrive
7 Overall
Pros
+ Fun, interesting mechanics.
+ Upgrades give you a sense of agency over your vehicle.
+ A vibrant, colourful cartoon aesthetic.

Cons
- Bosses can provide some frustration.
- Combat can feel repetitive.
- Over very quickly.
Summary
I found Pressure Overdrive to be a fun little jaunt with plenty for shoot-em-up fans to be engrossed by. It's not especially enduring but the upgrade system and the pressure mechanic at least offer something a little different. The story is a touch thread-bare but the action kept me entertained for a few hours.