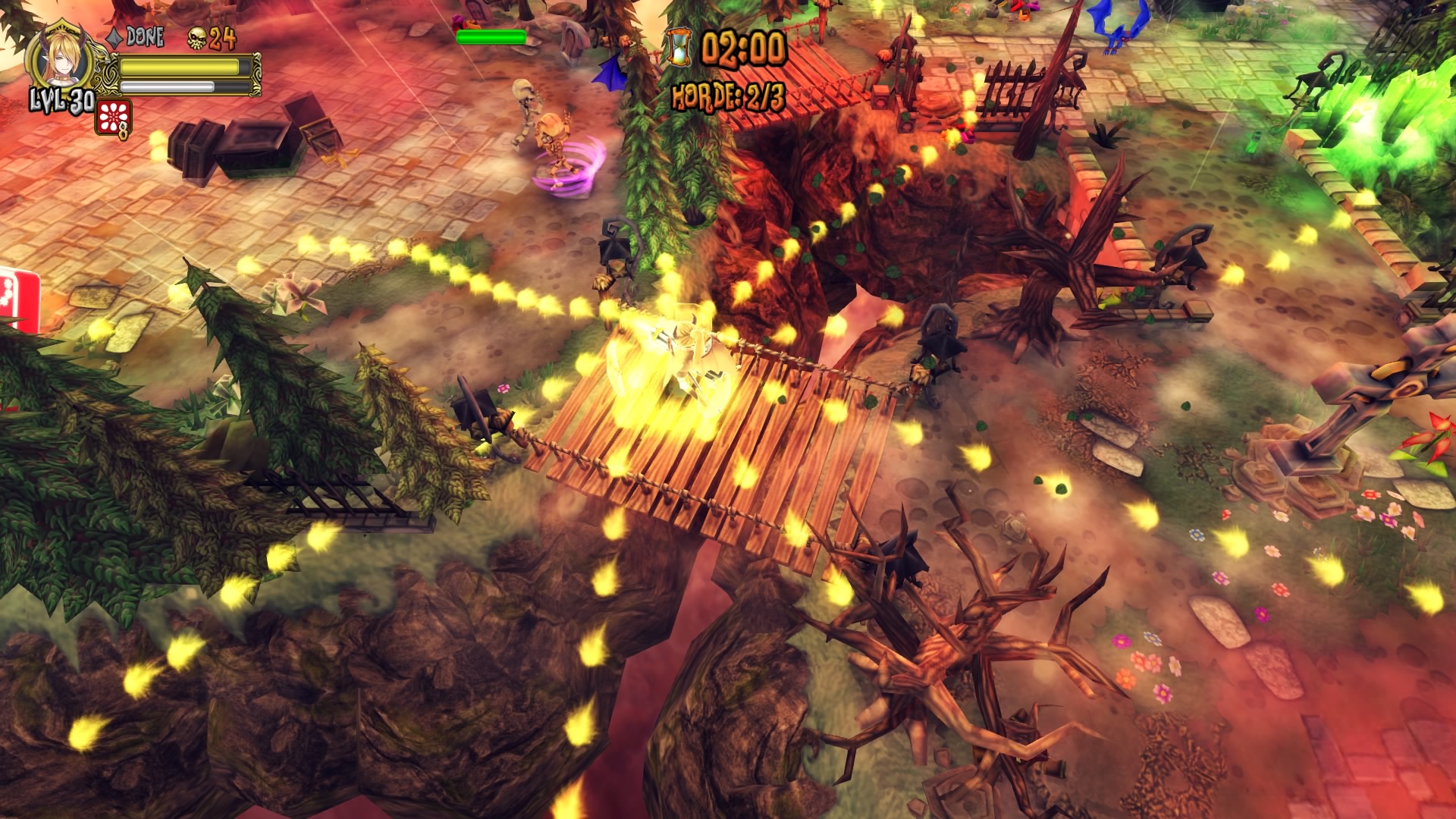 Another twin-stick shooter with a bit of levelling up?  Yes, Demon’s Crystals isn’t going to be winning any awards for originality and this little arcade shooter has an absolute tonne of competition on PSN already – I’m pretty sure we review at least one a month – so let’s keep it simple.  What is it?  What does it do well?  What does it do badly.

The first one is easy.  It’s a horror-themed affair that sees you taking on hordes of undead enemies across 27 levels, split between three environments:  graveyard, castle and forest.  Each level is split into two to three sections, called hordes.  Beating a horde involves killing a set number of enemies or picking up a set number of crystals.  Get enough and it’s onto the next one. 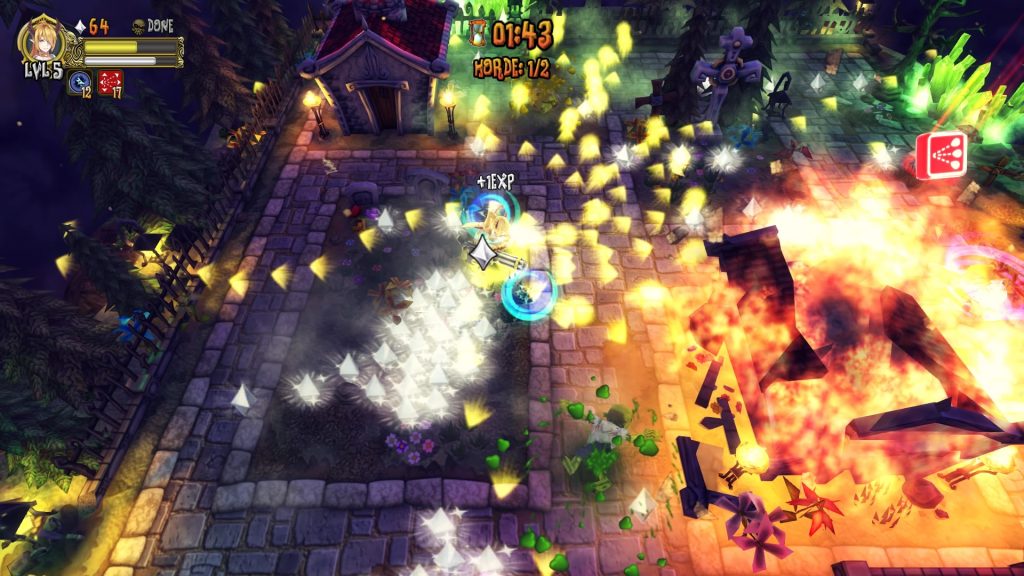 Power-ups and power-downs help or hinder you as you go along.  You can get boosts to your time limit (which rarely plays a factor anyway), speed increases, temporary weapons and so on or you can lose time or health, as well as the mandatory ‘fuck up your controls’ power-down that these games always have.  Levels 9, 18 and 27 are boss battles and these, unlike most boss battles, actually provide a welcome bit of variation to break up the action.

Add to that a simple levelling up mechanic (kill something, gain experience, level up and get a few more hitpoints) and four player local co-op and that’s pretty much the game described.  And oh shit, we’re only two screen shots in.  Let’s pad this mother out!

So what does Demon’s Crystals do well?  The shooting.  Shooting is mapped to the right stick with no need to hold down a fire button.  More games need to do this.  The action is pretty much non-stop and some of the power-up weapons are actually pretty useful.

The game isn’t afraid to throw around a lot of glowing colour to brighten things up and the cartoony look isn’t unpleasant to look at.  The soundtrack is slightly out of place but is actually pretty good.  It feels like it should be paired with a James Bond car chase at times but I kind of liked it. 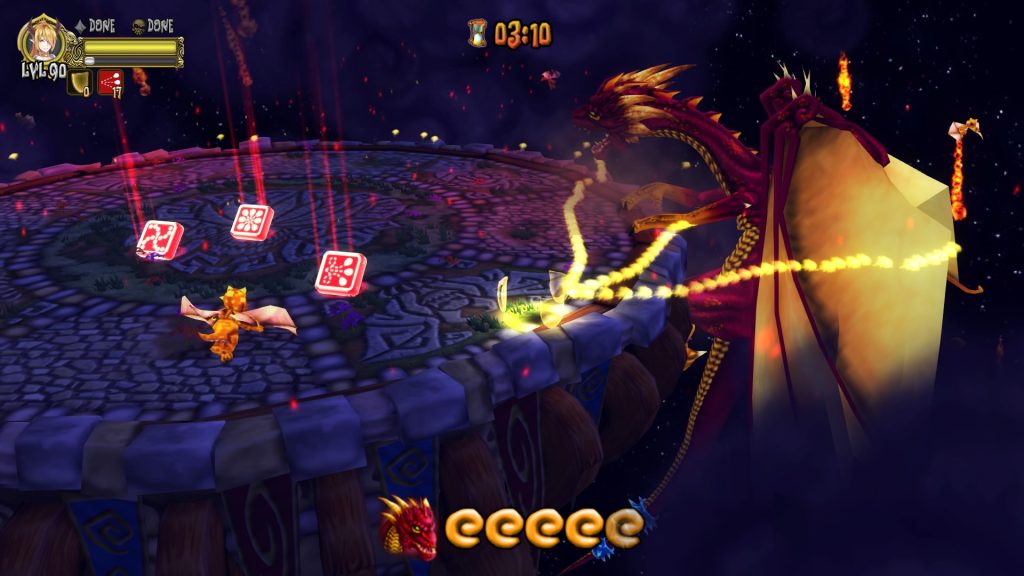 The bad is going to take a little longer to get through.

While the look is pretty stylish, it does get in the way a bit.  Precision shooting is tricky when the screen is full of glowing backdrops, enemies and attacking fire (not to mention how many bullets you’re generally pumping out at any given time).  It’s far too easy to pick up a power-down, sometimes by mistake and sometimes because it is hidden behind a power-up.

The levelling up is entirely pointless.  You’re generally strong enough for the next level.  There’s no sense of progression, no weapons to unlock, no skill points to allocate.  It’s just a tacked on mechanic and it tops out too early.  Level 90 isn’t going to be much use in the final few levels.  This is where your buddies come in but they aren’t going to be fussed by yet another twin-stick shooter, especially when there are better ones.  And, of course, there’s no online play. 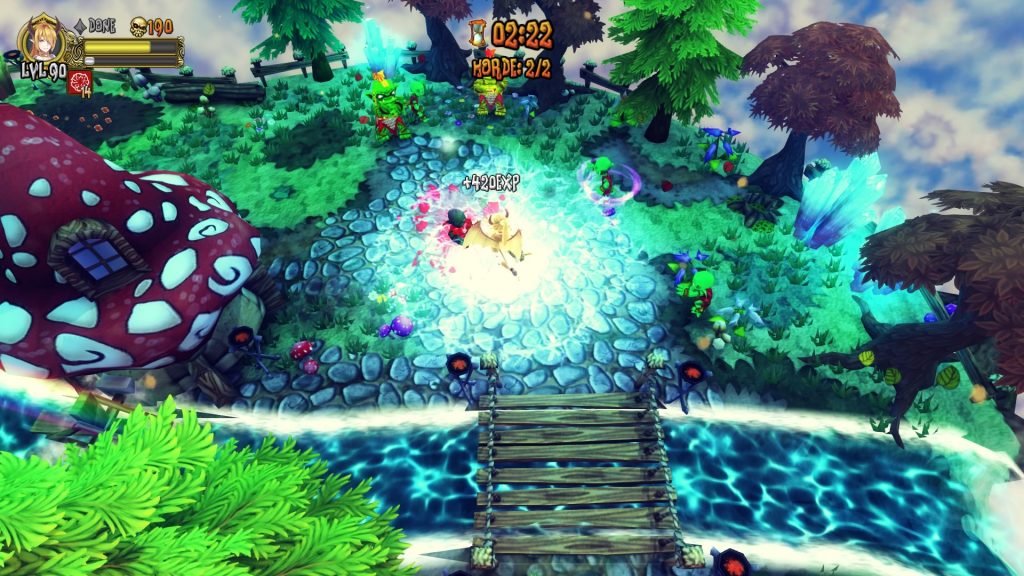 There are four characters to pick from but these all behave the same with just their colour really allowing you to tell them apart.  Why not give them some class properties?  Different weapons?  Anything?

This is odd because having just reviewed Tango Fiesta, which had weak combat but reasonable levelling up, this is the exact opposite.  The combat is good but everything else is paper thin.  So while it is immediately more satisfying, Demon’s Crystals gets old fast.  Oh, and it crashes.  A lot.

Demon's Crystals
5 Overall
Pros
+ Decent core gameplay
+ Controls are good
+ Reasonably well presented
Cons
- Visuals can get in the way
- Levelling mechanics are poor
- Very lacking in variation
- No online co-op
- Prone to crashing
Summary
Demon's Crystals is a twin-stick shooter that does little to stand out from the crowd. It has a degree of confidence and charm but the gameplay is so thin that it makes the game impossible to recommend.