Retro-inspired run and gun shooters seem to hit the PSN schedule pretty regularly and Finnish publishers Ratalaika Games have been responsible for a few of them but here we are again reviewing another one, Deep Space Rush.  As ever with Ratalaika this is a cross-buy with two very easy platinum trophies and it comes in at under 40MB.  So you probably shouldn’t get your hopes too high.

The game offers no plot at all but the game’s website does talk about you being part of DeTeam, a “top-secret security force that protects the scientific space stations from virus contaminations” and so that’s what you do.  Your ship arrives at a space station and you start running left or right (depending on where the game starts you off), shooting enemies and avoiding traps. 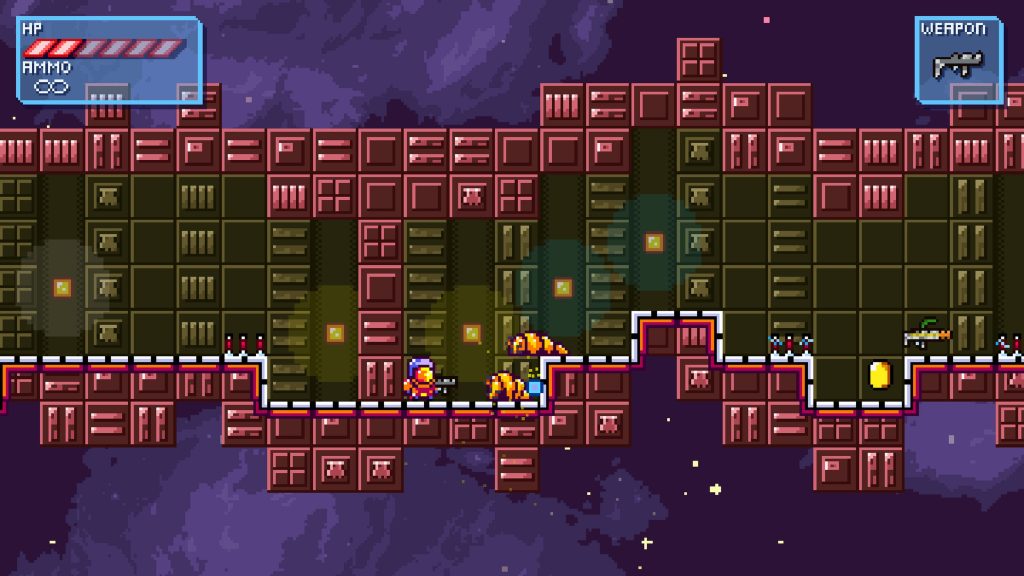 It’s all very simplistic stuff.  You run, jump and shoot.  There are no extra controls at all.  As you run along you’ll find floor traps, turrets and lasers doing their best to stop you (why aren’t they stopping the aliens?!) and every now and then an alien will either run at you or drop down from above.

You’ll die quickly thanks to the fact the, initially, you can only take a few hits but also because the traps are quite hard to avoid thanks to the sensitive controls and their random placement which tends to always be in the worst place so that you end up having to pick your poison between taking damage from the trap or having an alien land on you because you couldn’t trigger them safely because of the placement of said trap. 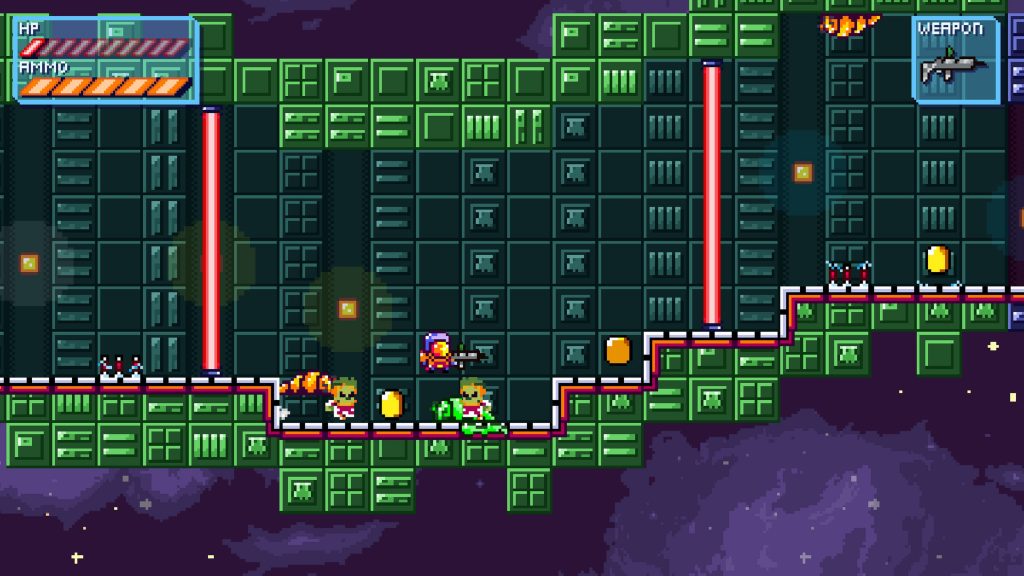 You collect coins along the way though and these are used to buy upgrades which are kept for further playthroughs.  Aside from buying more hitpoints and improving your default weapon, you can also purchase new guns, shields and speed boosts.  Once bought, these appear in the game as pick-ups, which is an okay system, and they can also be upgraded by spending more money on them.  The weapons are all interesting to check out but the big problem is that they don’t really matter because you don’t face enough enemies.  This isn’t Metal Slug with lots of enemies running at you, instead the traps seem to be the bigger focus of the game.

This is further enforced by an easy to exploit issue with the game.  Pick ups are generally one screen length apart.  So if you just buy the shield, only the shield will show up.  Upgrade that and you’ll be able to stay invincible pretty much the whole time.  Not that you need to do it, the game’s easy enough, but we did it on our Vita playthrough (to see if anything new/good happens later on – it didn’t) and it just screams poor game design.

Unfortunately, this is one of Ratalaika’s worst games.  It’s not that there is too much technically wrong with it but rather that there’s not much to it.  As ever with Ratalaika, the platinum is obtainable within thirty minutes but usually with them there’s still plenty of game left to see.  That’s not the case here.  By the time you’ve earned that platinum, you’ll have done everything.  There’s no endgame here, no bosses, no checkpoints, no floors to explore.  You just run forward, kill a few things, avoid a few traps and then you eventually get killed.  Upgrading lets you last longer but you rarely see anything new and certainly nothing good. 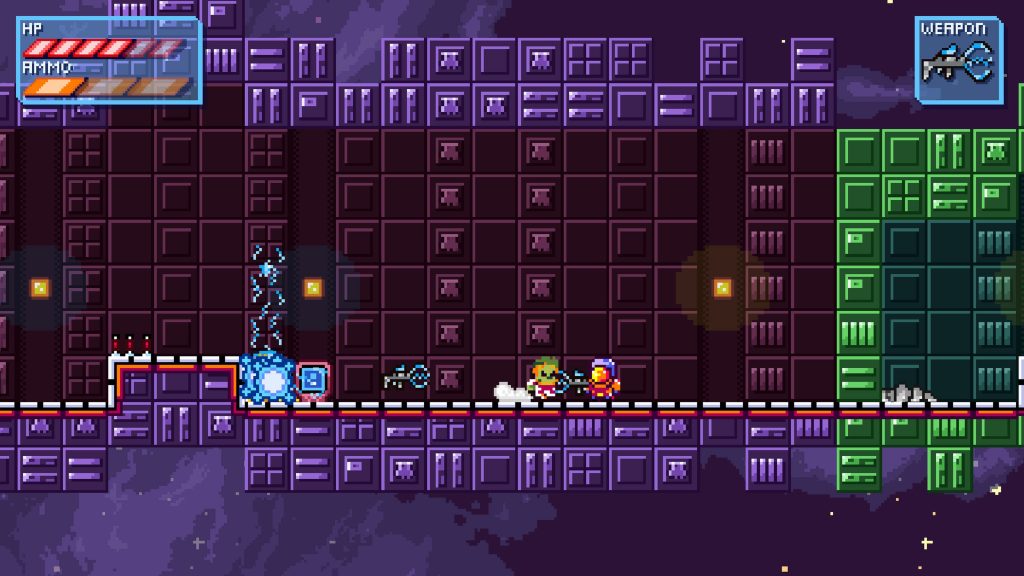 Deep Space Rush genuinely feels like one of those old Nintendo Game and Watch titles where you do a repetitive task for a few seconds and then extend that for several minutes until you’ve clocked the score past 999 or died.  It never gives you a reason to come back, no plot to uncover, no bosses or interesting enemies.  Not even just some eye candy or something.  Indeed, because the game is yet another retro throwback, it’s very underwhelming visually.   Each level is just a series of monochrome tiles filled with generic traps and poorly-defined enemies.

There’s nothing more you can say about the game really.  Its simple presentation might have been acceptable back on the SNES or the Amiga (although both machines were capable of far better) but the gameplay would have felt thin even a generation before.  If this had been a Spectrum or Amstrad game it wouldn’t have been good for anything over than a free magazine cover tape.   Make no mistake, you’re not buying a game here, you’re buying a cheap platinum trophy.

Deep Space Rush
2 Overall
Pros
+ Briefly entertaining
+ Cross-buy
+ Some interesting weapons
Cons
- Very little depth
- Gets dull after a few minutes
- No reason to keep playing
- No effort presentation
Summary
Generic presentation and paper-thin gameplay mean that you'll be bored of this tired, retro run and gunner even before you nab the trivially easy platinum trophy.