The third visual novel entry in the Danganronpa franchise has hit PS4 in the form of Danganronpa V3: Killing Harmony. If you’ve played either of the previous two titles then you’ll have a pretty good idea how things are going to go down. I was a little disappointed, expecting a series as hectic as Danganronpa to throw some extreme curveballs in to the formula, but that’s not to say the game itself disappoints. 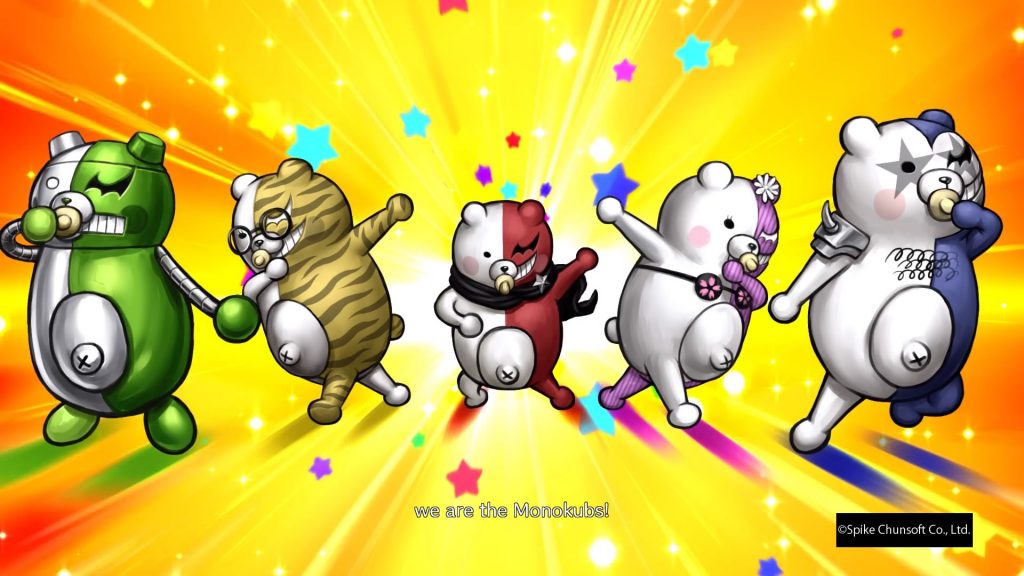 Once again sixteen students have been enrolled into an academy for gifted students against their will. Each student has an Ultimate Talent, meaning that for their age they are at the top of their field. As has always been the case the characters are the stars of the show, some are stronger than others but as the game progresses each generally has their moment to shine. The talents on show are varied, from the foul mouthed Ultimate Inventor Miu to the rather plain Ultimate Cosplayer Tsumugi, though you may feel a little deja vu coming from previous titles.

The students aren’t here to learn however as Monokuma, the series mascot, is back again to have the students off one another in the hope of achieving freedom. This time he is joined by the Monokubs who take the spotlight away from the main man a little but bring their own quirkiness to proceedings. Despite the students objections to the Killing Game Monokuma’s interference ensures that someone will commit a murder in the hope of escaping. A trial then takes place where all the students must debate as to who they believe the culprit to be, get it right and the murderer will be executed, get it wrong and everyone but the murderer is killed making them the winner.

Each stage of the game has a different gameplay experience. Your daily life has you exploring the academy in the first person, talking to your fellow students and progressing the story through reading like most visual novels. Beyond the Free Time sections where you can explore as you like, spending time with people to learn more about and befriend them, these sections are very linear and are just leading you to the next part of the plot. Once a murder is inevitably committed you are put into investigation mode, which is similar to daily life, but you are limited to the crime scene and any other places of importance. Here you’ll be examining items like a point and click game and getting testimony from witnesses. Once you’ve got all the information that’s available the game progresses to the trial stage which still involves a lot of reading but otherwise is quite different. 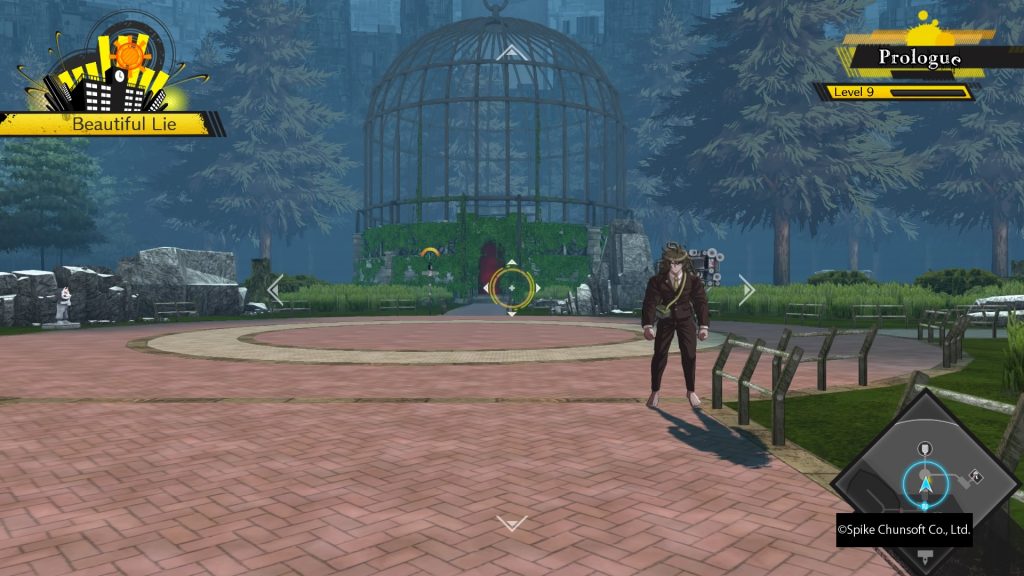 Apart from the straight reading parts the majority of a trial is split into mini games. The most common is Non Stop Debate which has everyone giving their opinion on a certain topic and it is up to you to notice an inconsistency or contradiction. Everyone’s testimony is played out in real time in words on the screen, you have Truth Bullets which represent pieces of evidence which you must use to object to something by putting a reticule over the statement and firing. Get it right and you can move on to the next part of the trial, get it wrong and you lose some influence as everyone else starts to suspect you. Get too many wrong and you fail but can retry from that point, you will just take a hit to your final ranking.

Danganronpa V3 adds more to the trial formula this time around as you might expect. In Non Stop Debate you can now disagree with someone, agree with them, or lie. You get a feel for when you should be looking to do each though there will still be times where you’re not sure what the game is asking of you, even if you’ve figured out the overall idea, at which point trial and error comes into play. The return of the Hangman’s Gambit mini game where you select letters as they float by to reveal a word is a great example of this, as you may know the answer but not know how the game is phrasing it, requiring you to just grab some letters until it becomes clear.

Other minigames rear their heads at points. Some make sense in a trial like Debate Scrums which have the students split requiring you to select the correct counter argument by picking out keywords and Mass Panic Debates which are similar to the Non Stop Debates but have three people talking at once requiring you zone in on the right testimony whilst actively quietening others. Then there are Psyche Taxi and Mind Mine which are just mini games having little relevance to a court case whatsoever. Psyche Taxi looks like Outrun and has you driving down a road picking up letters to form a question. Once a question is formed you need to pick a lane to drive in based on the answer floating above it, get it right and you go again to form another question. 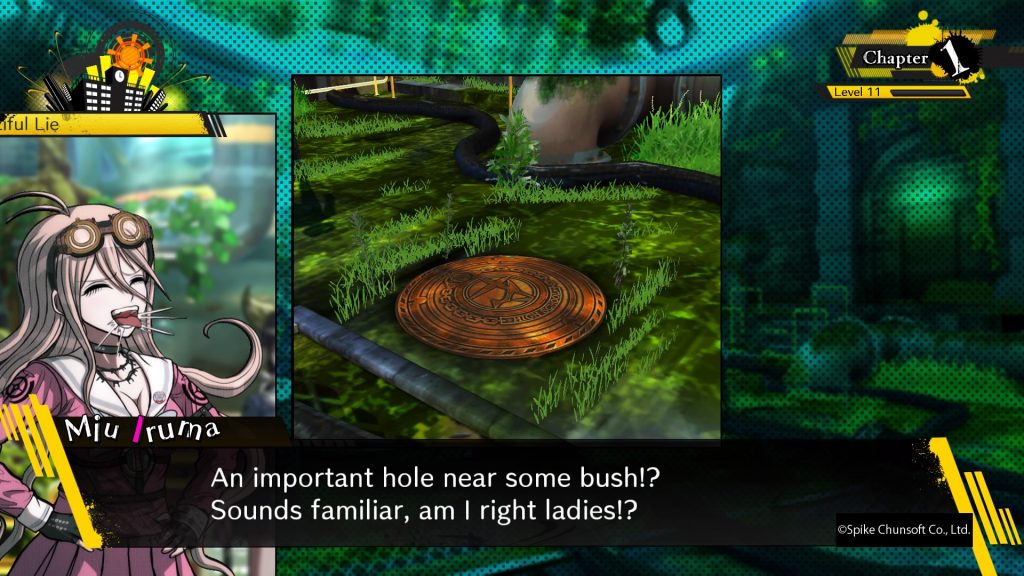 Mind Mine fills the screen with different colour blocks, hiding clues. Blocks of the same colour which are touching each other can be destroyed to reveal what is underneath but as blocks are broken adjacent blocks change their colour to the next in the cycle. Those who enjoy puzzle games will probably get a kick out of it but if someone walked in on you playing it they would not know you were in a Class Trial.

Figure out who the culprit is and they get a gruesome and usually slightly disturbing execution scene and then you move onto the next chapter, to unfortunately repeat the process. Chances are you have grown fond of both the victim and the murderer and so losing both at the end of each chapter is often a sad time, but pushing on to find out who is going to make a break for freedom next and why will keep you going through to the end. This is a long game too, you’re probably looking at about fifty hours or thereabouts.

Presentation is strong as you’d expect with the cardboard cut out style characters looking great as always and the music, both old and new, conveying the mood of the scene perfectly. Weirdly the illustrations reserved for special scenes didn’t seem as well drawn which I don’t remember being an issue before but it’s a minor gripe for a game that otherwise oozes style. I played exclusively in English and found the voice overs to do a great job for the fully voiced sections though this will be down to preference with a Japanese option available.

You’ll unlock more mini games upon completion as you have in previous games which are mere filler, mainly there for completionists or trophy hunters and are completely separate from the main game. Fans of the series will have more than enough in the main story to return to the Killing Game as, although slightly more vulgar than I remember the previous games being, the characters and writing is still top notch and the three different stages of each chapter do give you a feeling of constant progress, even if the pace can be a little slow at times. 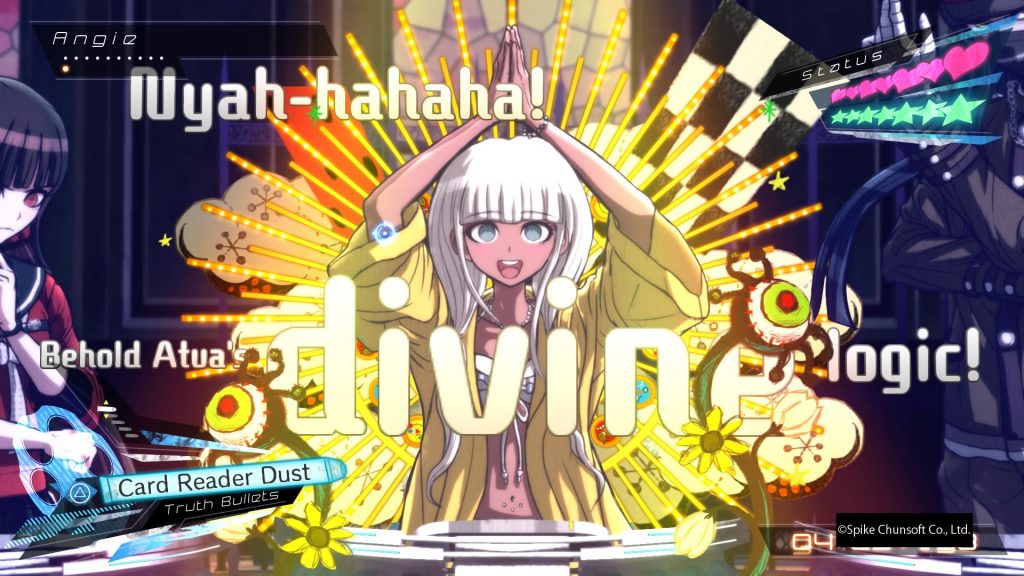 Danganronpa V3: Killing Harmony is another excellent addition to the series that fans can’t miss. Although you could technically start at this one I wouldn’t personally, the two previous games are definitely worth a look on PS4 or Vita. The formula is much the same but there are some unique scenarios which keeps this one interesting and will have you invested to the end.

Danganronpa V3: Killing Harmony
8 Overall
Pros
+ Great characters
+ So much style
+ Some unique scenarios
Cons
- Some deja vu
- Can be quite vulgar
- Class trial mini games can be a pain
Summary
Danganronpa V3: Killing Harmony is another great addition to the visual novel series. The characters are well written and despite the formula changing little there are some unique scenarios to figure out.