In this modern age of 16-bit action platformers, it’s quite nice to see a game with modern-ish production values and Hidden Dragon Legend: Shadow Trace (an early contender for worst title of the year) is something of a rarity in that it has actual polygons in it.  Using a 2.5D viewpoint, the game combines exploration, platforming and lots of hack and slash combat in an ancient Chinese setting.

You play as Lu who wakes up missing his memory to find he’s in prison and all of the other inmates are being slaughtered by the Organization, a murderous er… organisation who have been conducting experiments on inmates.  You control him in a tutorial that teaches you how to walk, jump, evade and ultimately attack as he breaks out of the prison. 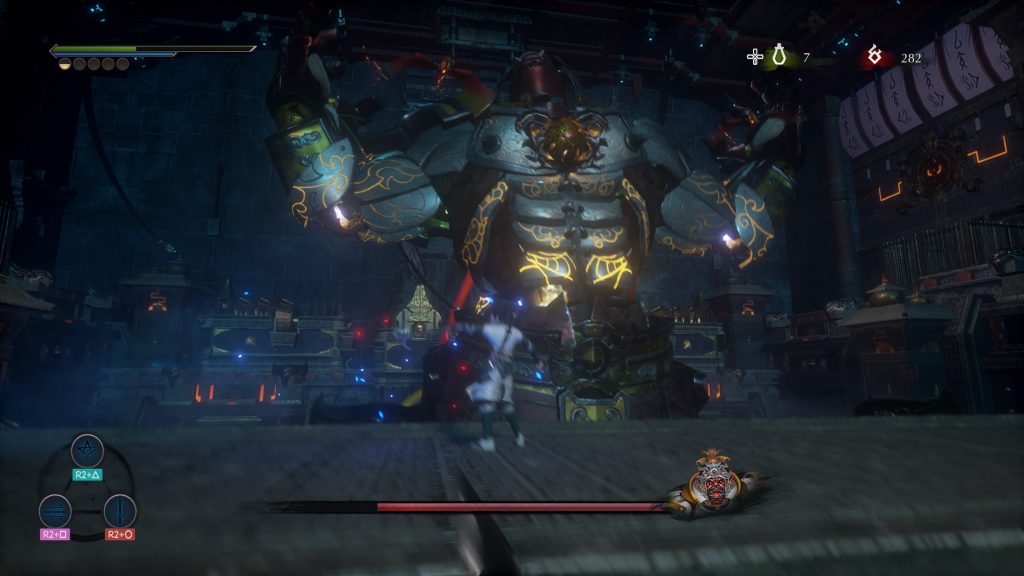 There’s quite a lot going on in Hidden Dragon and it is drip-fed to you initially.  Lu has access to clothing, swords, daggers, skill combos and sutras (which are essentially buffs) and much of this can be upgraded.  It’s not always particularly well explained, in fact some of it never is, but a bit of depth is never a bad thing in a game like this.  Enemies drop currency (kill points) that can be spent on these upgrades and you can farm earlier levels if you want beef yourself up a bit.

The combat itself is typical hack and slash fare.  Light attacks are mapped to the square button, heavy to the triangle much like every other game involving a sword that isn’t Dark Souls.  These can be hammered or alternated for various combos and you’ve got aerial attacks too.  Later on the game introduces the dagger which gives you a ranged attack which is pretty handy for getting some cheap damage in if you can get a bit of distance.  Finally there are skill moves which are special moves that use up soul stones that are picked up from dead enemies.

The depth of combat is pretty welcome and once you figure it out it’s not too complicated.   Your attacks do feel weak though, much like a lot of sword-based games.  You want limbs to fly off and for smaller enemies to die immediately but you’ll be chipping away at their health for a while.  This is particularly true of ‘elite’ enemies and much like any scrolling fighting game (which this isn’t a million miles away from being), bigger enemies get recycled a lot and having to deal with one when there are now like four other enemies on screen, it all gets a bit tedious.  You never really feel powerful, even when upgraded. 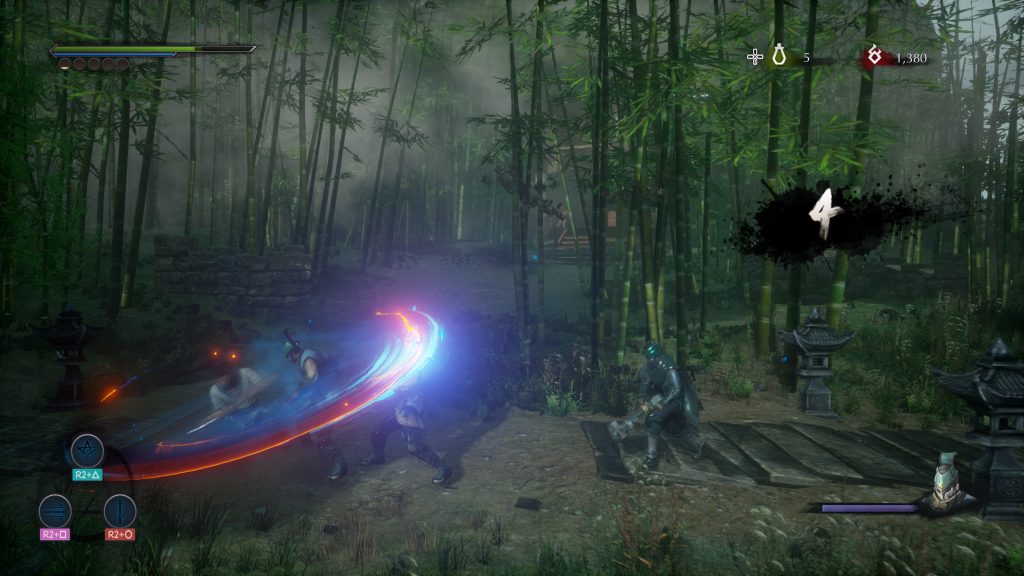 Boss battles are also a significant pain in the arse.  They take far too much damage and they get progressively fiercer as they lose their health.  They can be a real problem but thankfully you can buy health potions before these battles.  The game doesn’t really tell you that but once I figured it out it did help me progress.  If you’re out of kill points then you’ll want to grind an earlier level which is what I had to do before one absolutely bullshit boss on chapter three.  Luckily, the level select allowed me to go right back to where I was, so that was good.

One problem the combat has is that enemies occasionally become immune and will launch themselves at you through your attacks.  They’ll turn gold first but sometimes you don’t have any time to react.  This is evident with the first boss and continues through the game.  It might not always kill you, but it does interrupt the flow pretty badly and when you’ve got a screen full of enemies to keep track of, it’s particularly annoying.

That said, none of this is as annoying as the frankly miserable platforming sections.  For a super-agile ninja type, Lu isn’t very good at grabbing hold of platforms.  If he did, things would be so much better but instead you can find yourself dying one peasant’s death after another.  That said, my early frustrations with the platforming were alleviated when I realised you could put your evade move (L1) at the end of your double jumps but later on even this knowledge won’t stop you tearing your hair out at some of the platforming hellishness you have to deal with. 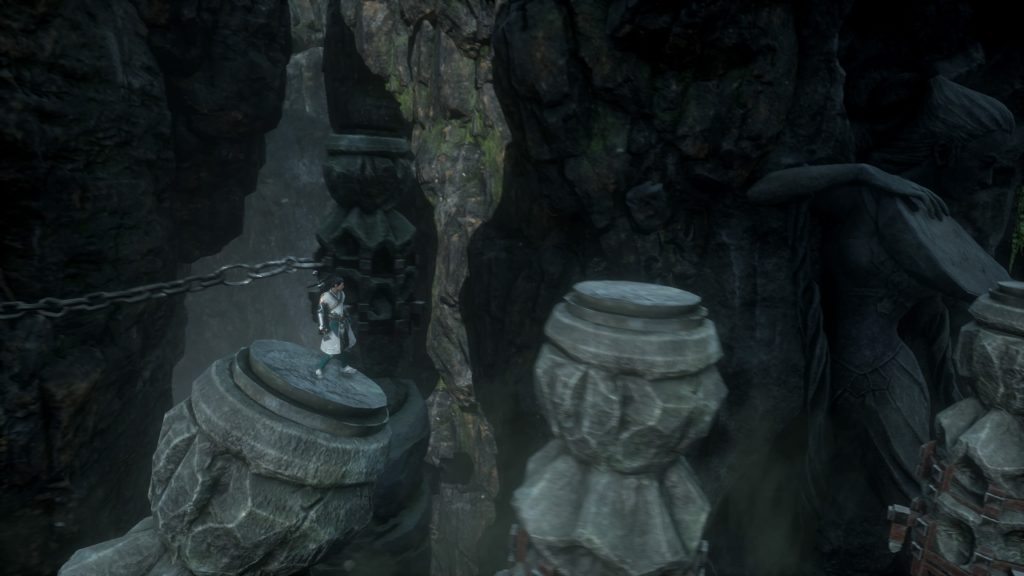 Hidden Dragon likes to get out of its 2.5D trappings by swirling the camera about or making you take ninety degree turns at the end of corridors and often you’ll be presented with a big room full of traps and challenges that you’ll be about to face and after a while I found myself sighing heavily each time I saw one of these.  The game world is weirdly designed.  The areas aren’t practical but rather just seem like game levels.  That might sound odd but when one character’s ‘clever boobytraps’ involve basically destroying his own lair and when huge rooms are constructed of platforms and grappling hook attachment points, you can’t help wonder why such a room would ever exist.

Visually the game isn’t too bad.  It’s not exactly PS4 quality but there is a visual depth to the levels and the game does have some varied enviroments.  The 2.5D is definitely more ambitious than we’re used to with all the indie games we review but it’s not going to be causing your PS4 Pro too many problems to display it.  Sound is pretty average with some particularly dated voice acting too. 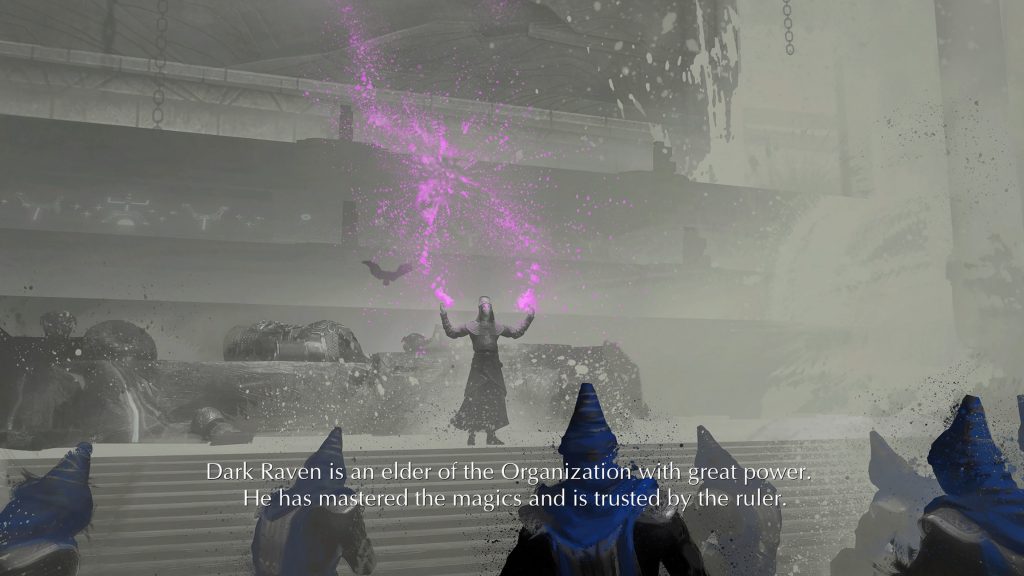 So, that’s a lot of complaints.  Between the slightly clumsy combat and platforming, the irritating level design, the unpleasant boss battles and the PlayStation 3 production values, there’s a lot to not like about Hidden Dragon but that said, it’s a tad more ambitious than the usual PSN budget title and hack and slasher fans may get something out of the game.  I found myself enjoying parts of it before being let down by a section I didn’t like but there was never anything game ruining.  If anything, Hidden Dragon is just about persistence.  You’ll get through all the sticking points eventually as it’s not exactly the hardest game on PSN or anything but the question is whether or not you’ll enjoy doing it.  The story and the visuals don’t offer any real reward for sticking with the game though.

Hidden Dragon Legend
5 Overall
Pros
+ The 2.5D presentation is better than a lot of budget platformers
+ Combat has lots of depth
+ Good level of challenge
Cons
- Slightly unsatisfying combat
- insignificant upgrades
- miserable platforming sections
Summary
Hidden Dragon Legend offers a feast of combat action and platforming with a beefy challenge but comes with a host of irritations too.