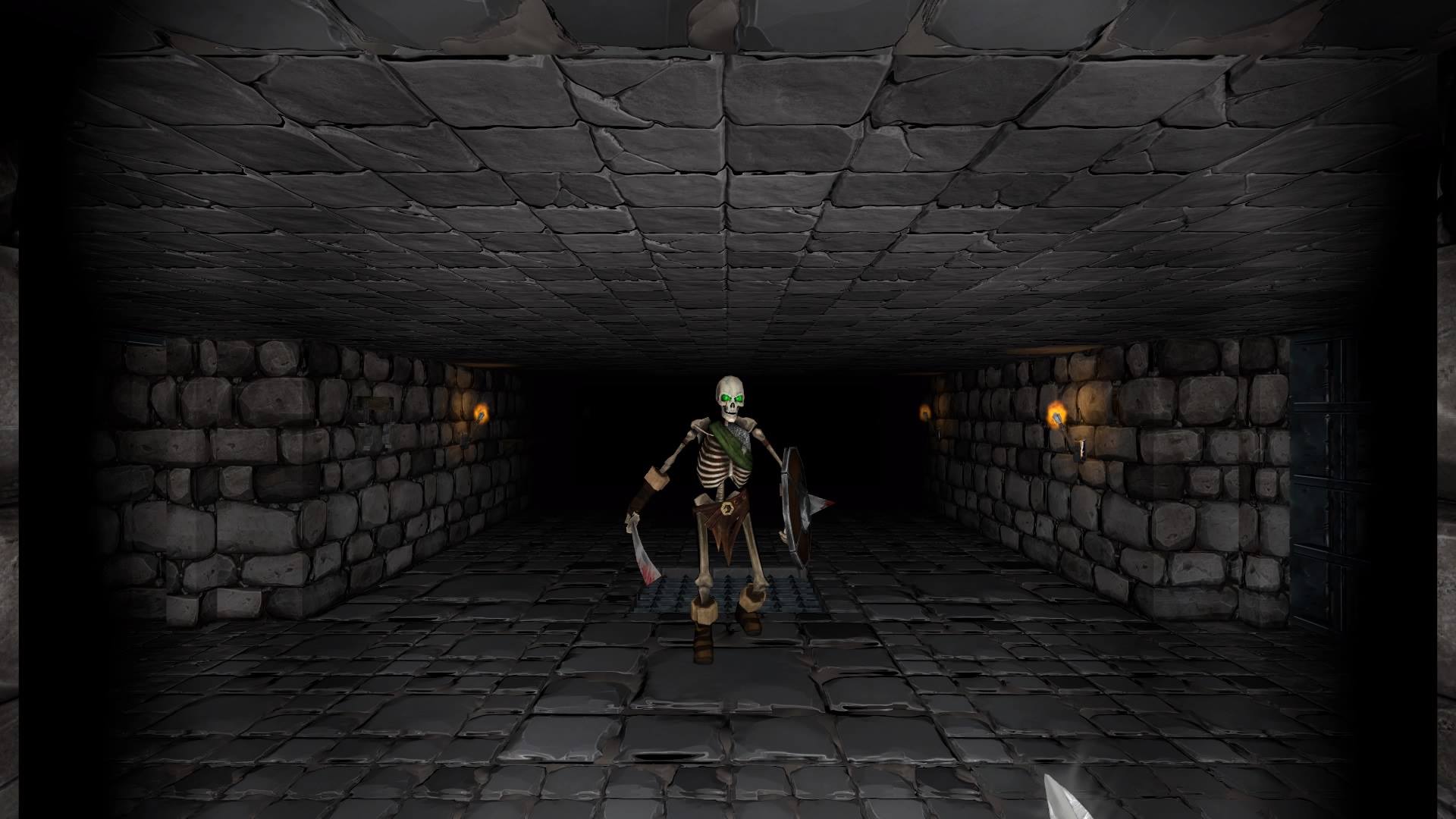 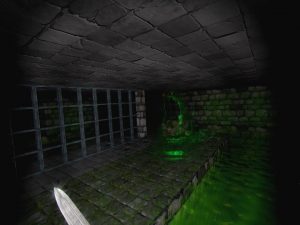 As a youngling I was rather fond of a particular ITV game show. It wasn’t your typical game show with questions and big money prizes but instead one that focused more on a macabre medieval setting that permeated through its dark, dungeon and dragons-esque hall crawling. This show was called Knightmare and tasked a team of four kids against supposed impossible odds as one of the kids wore a helmet of justice and the others guided them through challenge rooms as hilariously poor CGI terrors that would stalk them at every corner. It has often been a desire that there would be a game of this concept, one in which you play as an adventurer trawling through a dungeon to attempt an escape and survive.

Crystal Rift feels like it is an homage to this in a lot of ways, barring a few limitations. Of course there are no other players helping on your quest as this is a single player affair and instead of a helmet of justice you instead don the PSVR headset (although this can be played without VR also) as a means to spy into the dark, maze like hallways of the relatively non-descript dungeon that you will be spending your time in. Some of the philosophies of Knightmare do come about in the form of the style of challenges you face and the basic, low fidelity visuals that stand in for game graphics. 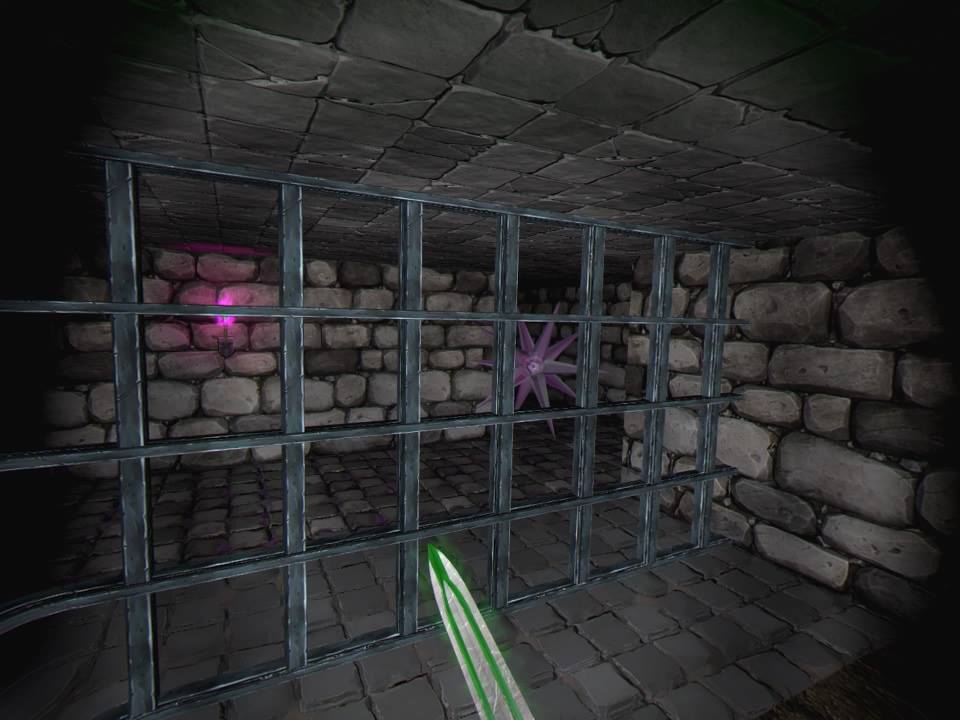 As this is a VR game the developers have taken some time into making it somewhat comfortable for players to move around, however I am not sure if the approach works as well as it could do. You essentially move space by space on a grid, making your movements more like a chess piece moving across a board rather than an organic being. This is absolutely fine for the puzzling elements which can see you navigating floors with switches and traps however when it comes to combat, it can often make things quite trivial. Enemies are bound to the same rules as you so they will often find the most direct route to yourself so you can dodge attacks easily with a step forward, swipe, step back approach. Alternatively, the enemies may find themselves a bit confused as they stiltedly swivel and side step around while their AI tries to find a suitable path, making them an easy target with little strategy required to finish them off.

Some enemies also have set patrolling patterns that are marked out on the floor beneath you, meaning that if you are enjoying the luxury of the PSVR headset it is easy to see where a creature can or cannot move, making it relatively easy to side step away from danger. This is a bit of a shame as while the predominant nature of Crystal Rift is in the puzzling the combat never feels particularly challenging, even with the one hit kill mechanic, if you do end up getting hit it is more of a nuisance than a punishment as there are plenty of checkpoints around to warp you back only a few steps away. It certainly lacks the sense of reward as you hack through generic skeleton model #3 or manage to escape the hilarious looking slime beasts that simply wobble around a set path in completely nonthreatening manners. 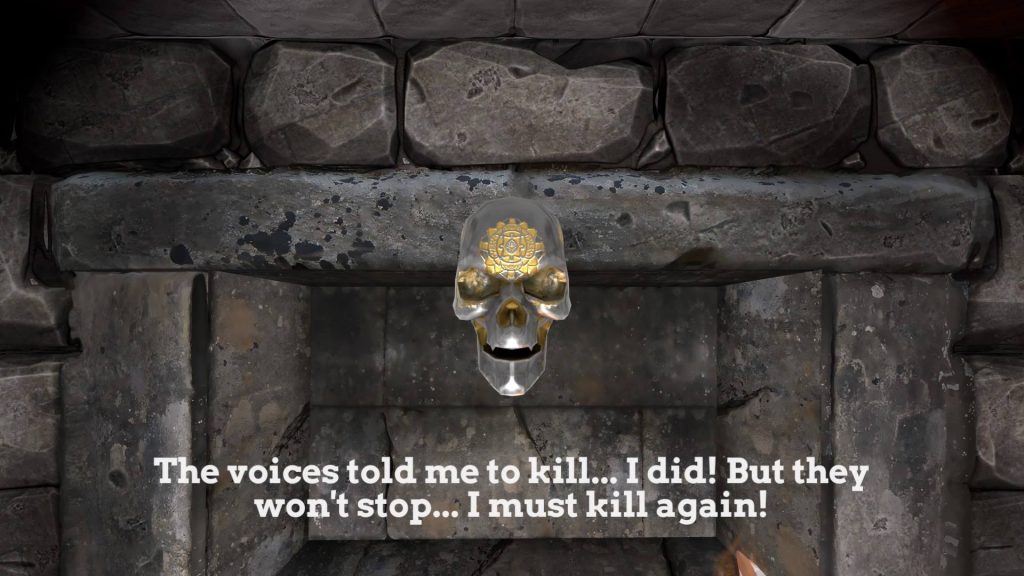 This is noticeably where Crystal Rift falls flat on its face. It is sold as a “Experiential horror challenge” But it just doesn’t do horror well, despite the reliance on well-trodden tropes. I should also mention that when it comes to VR, Horror is certainly a lot easier in terms of jump scares, particularly when it comes to wandering down hallways face first into darkness. With Crystal Rift you will occasionally see ghostly shadows that jump in and out of view as soon as you catch them in the corner of your eye and if you aren’t wearing a headset then this is worse even still, with traps and scares often being completely missed due to the fixed viewpoint you are given. The soundtrack of the game has been chemically distilled to heighten tension however at times it can border on the ridiculous. For example, the majority of the soundscape will be laced with a constant thudding heartbeat that fills your ears, but then suddenly you may enter a room and the music will change into some of the most elaborate and downright silly cartoon like horror tunes that I have ever heard. 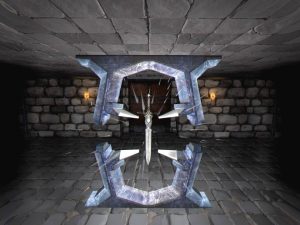 The graphics do not help at all either. Crystal Rift has been built in Unity and it really does show. All of the assets appear to be fairly generic and tend to look goofy as opposed to heartbeat inducing. The typical skeleton like enemies are as standard as they come and the previously mentioned slime beasts just look hilarious, especially with their lack of animation and generally uninspired design. There is some variance with the designs, instead of green slime beasts you will also encounter lava slime beasts that through fire at you or lava rock golems but otherwise these aren’t anything special. You would certainly expect better than this from the Psytec games, who also created Windlands. Which sure, wasn’t an amazingly original game to look at but still had far more going on than Crystal Rift.

Crystal Rift
4 Overall
Pros
+ It briefly reminded me of Knightmare, I loved that show. + It’s simple enough to play through and easy to grasp
Cons
- Not at all frightening in the horror sense. - The music is disjointed and at times ridiculous - The creature models and assets are incredibly generic - Not much fun at all to play outside of VR
Summary
Crystal Rift on PSVR is about as basic as it gets. The low fidelity visuals, questionable soundtrack and generic asset choices tarnish what could have been a decent dungeon crawler. Without the VR headset it is even less enjoyable due to poor viewing angles and stiff movement. This just makes Crystal Rift very hard to recommend, even at its lower price point.